Richborough is a key site in the history of Roman Britain, used during the entire length of the occupation from the invasion of AD 43 until the end of Roman rule around 410. Though now an inland backwater, 2,000 years ago it lay on the Kent coast, and it was here that the invading Roman forces first came ashore in Britain. As the main entry point from mainland Europe, over time the site developed from a military supply base into a thriving port town and later a massive fort.

Today, the impressive ruins and the vast collection of objects found at Richborough give us an exceptional insight into four centuries of life there.

Soldiers disembarking supplies from a ship, in a scene from Trajan’s Column in Rome, which dates from the early 2nd century
© Fine Art Images/Heritage Images/Getty Images

Richborough now lies 2 miles inland in the east Kent marshes, but in Roman times it overlooked the strategically important Wantsum sea channel, which divided the Isle of Thanet from Kent. In AD 43, at least part of the Roman Emperor Claudius’s invasion force of 40,000 men landed here, in what would have been a massive military operation of great complexity.

They quickly built a defensive barrier at the invasion site in the form of two deep, parallel V-shaped ditches, with a rampart on the seaward side, running for at least 650 metres (700 yards) north–south in line with the Roman coastline. These fortifications would have defended the invasion beachhead, giving protection to ships, troops and supplies.

In the immediate area of east Kent the invasion force encountered no resistance, and the Roman army moved to campaign further inland. Richborough then became a military supply base – there is evidence for large storehouses or granaries which would have been used to provision the troops as they made their way inland. The base developed into the port known throughout the Roman world as Rutupiae. 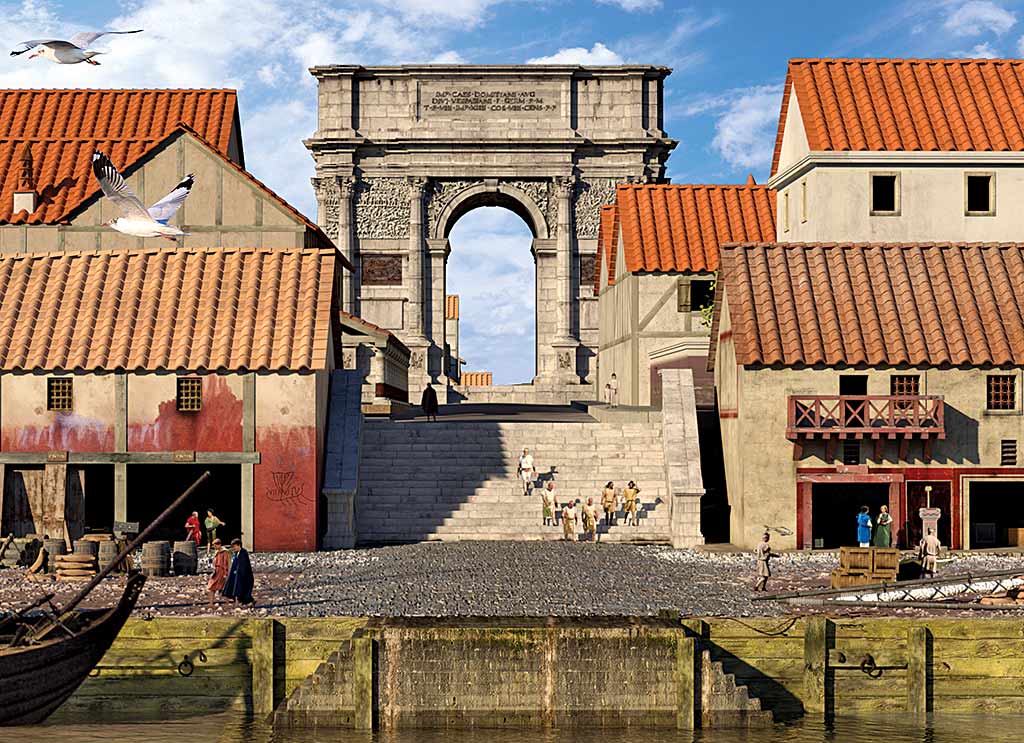 A reconstruction of the Richborough triumphal arch as it may have looked from the waterfront in about AD 120. Unusually, it was a ‘quadrifons’ arch, with an arch on each of its four sides, and would have been one of the largest in the Roman Empire
© Historic England (illustration by Peter Lorimer)

At the end point of the best sea crossing from Gaul, with a sheltered harbour, Richborough was ideally situated to develop into a major port.

The town included an amphitheatre and one of the biggest monumental arches in the Roman Empire. The arch, built in about AD 85, was exceptionally large and elaborate. Twenty-five metres tall, it was clad in expensive white marble, imported from Italy, and adorned with sculptures and inscriptions. Such an impressive monument can only have been inspired and resourced by the Emperor. It symbolised Richborough’s status as the gateway to Britain, or accessus Britanniae – the main and most important port of entry from the Continent.

The heyday of the town was in the 2nd century. An earlier timber mansio – an inn for official visitors – was rebuilt in stone, and other buildings including shops lined the streets. These are now partly visible within the area of the later 3rd-century stone-walled fort. Geophysical and aerial surveys, however, have shown that the settlement extended far beyond the confines of this later fort, covering an area of at least 21 hectares (52 acres).

A reconstruction of the port town of Richborough at its greatest extent in about AD 120, based on evidence from geophysical surveys and excavation © Historic England (illustration by Peter Lorimer)

The amphitheatre at Richborough, set in a high position at the edge of the settlement, was probably built when the town was at its height. Like all Roman amphitheatres, Richborough’s arena would have hosted wild beast hunts, probably featuring mainly native species – bulls, wild boars and bears. The execution of criminals and fights between gladiators would also have taken place here.

Today, the amphitheatre appears as a large mound, with a large hollow within it that suggests the building’s structure. The first and only excavation took place in 1849, but that left many questions unanswered. More recently, geophysical surveys have found that it was much larger than the Victorian excavators thought – at 62 metres long by 50 metres wide, it could have accommodated up to 5,000 people.

Much, however, remains uncertain, including the date the amphitheatre was built, how long it remained in use, what it looked like and what happened after it fell out out use. Intriguingly, the 1849 excavators discovered a skeleton dug into the amphitheatre, which could suggest that the site became a cemetery after the Roman period.

The south wall of the late 3rd-century Saxon Shore fort at Richborough, with the earthworks of the earlier fort in the foreground

The town thrived for nearly 200 years, until in about AD 250 a drastic change occurred in response to both conflicts within the empire and attacks on the Roman province of Britain from Saxon and Frankish raiders. The centre of the settlement with all its buildings, even the monumental arch, was demolished and replaced by two successive forts.

The second of these, built in stone shortly after about AD 273, is the most prominent feature on the site today. It formed part of a chain of shore forts defending the eastern and southern coasts of Britain (and, in Richborough’s case, the Wantsum Channel) from the late 3rd century.

We have no idea how much of the town was militarised, or indeed how much of it remained in occupation. However, Richborough continued to be important as the entrance to Britain: at the very end of the Roman occupation, it was the last site in the province of Britannia to which Roman coins were supplied. This makes it one of the last remaining official points of Roman occupation, probably well into the 5th century.

A small sample of the tens of thousands of coins found across the site. Richborough has one of the largest and best Roman collections from a single site in Britain

An Anglo-Saxon church was established at Richborough, probably dating to the 10th century, though it may have had a timber predecessor as early as the 7th century.

Although its subsequent history during the medieval period is relatively unexplored, Richborough continued to be occupied in some way into the 15th century, possibly as a tiny settlement trading under the umbrella of the nearby port of Sandwich. Its significance dwindled thanks to the silting of the Wantsum Channel and the growth in importance of Sandwich, but the small 10th-century chapel remained in use until the 17th century.

Interest in Richborough was reignited by antiquarian visitors from the 16th century onwards, provoking many tales about the place and theories about features such as the monumental arch. There were excavations of the amphitheatre and arch in the 19th century. In the 1920s and 1930s, extensive archaeological excavations revealed the scope of the settlement and its importance to the story of Roman Britain, as well as uncovering an extraordinary range of objects. The whole area within the walls of the Saxon Shore fort was excavated at this time and laid out much as it appears today.

More recently, aerial photography and geophysical surveys have revealed the extent of the Roman town. Much about this complex site, however, still remains to be discovered.