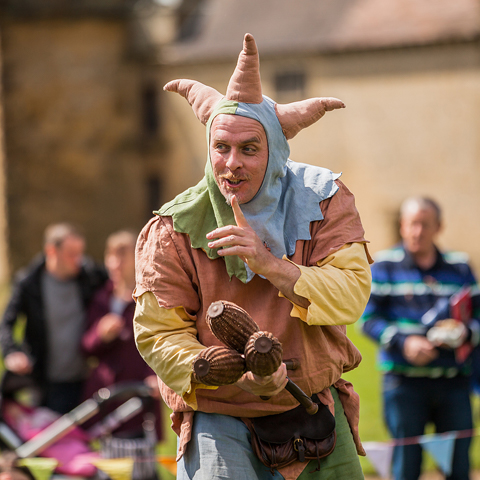 Join us at Eltham Palace throughout the summer holidays to learn what life was like in medieval times. From jester workshops, have-a-go archery, storytelling, squire training to lessons in courtly etiquette there will be a different activity each week for children to take part in. Activities will change week to week so please check below for more details.

Book online and save!

• Sat 23 – Sun 31 July: The palace was radically redesigned by Richard II, so join us to find out what makes a great palace, have a go at designing your own and decide if Richard should be remembered as a good king cruelly put down, or an incompetent dreamer who had terrible advisers and was a bit rubbish.
• Mon 1 – Sun 7 August: This week it’s your chance to be a medieval actor and take part in our interactive Robin Hood plays. Plus, play at being Robin Hood whilst having a go at archery.
• Mon 8 – Fri 12 August: During times of war you must learn to defend yourselves, have a go at basic defence and offence skills, learn what weapons were used and join our storytellers to find out how Edward IV became king during the Cousin’s Wars.
• Mon 15 – Sun 21 August: Want to know all about the worst jobs and the A-Z of torture during the medieval period, then this week is for you. You can also try your hand at sword school.
• Mon 22 – Sun 28 August: Did you know Eltham Palace was the childhood home of Henry VIII? Play like a prince and have a go at our hobby horse jousting, play along in The Great Chain of Being game to climb the Tudor social ladder and get the chance to try on some armour.
• Mon 29 August – Sun 4 September: Siege weapons were used throughout the medieval period to attack the country’s castles. Have a go at using our trebuchet and take part in our children’s battles to learn all there is to know about siege warfare.

Admission to the event is included in the standard admission ticket price. If you are a Member then your ticket will be free. You don’t need to book your visit in advance, but you will always get the best price and guaranteed entry by booking online ahead of your visit. If you purchase a walk up ticket on the day of the event, the ticket price will be higher than those listed above.

You can book your advance ticket online up to 8.45am on the day you want to visit. Your booking is for the site/event only and does not guarantee a car parking space, which may carry an additional charge. On the day, make sure you bring your booking confirmation with you.

Simply click on the Buy Tickets button above. This will take you to our online booking system. Once there simply select the date for the event you want to attend. Please make sure you bring your booking confirmation with you when you visit. If you are a Member please remember to bring your English Heritage Membership card. Members are able to book event tickets at the Member rate for those included in the membership only.