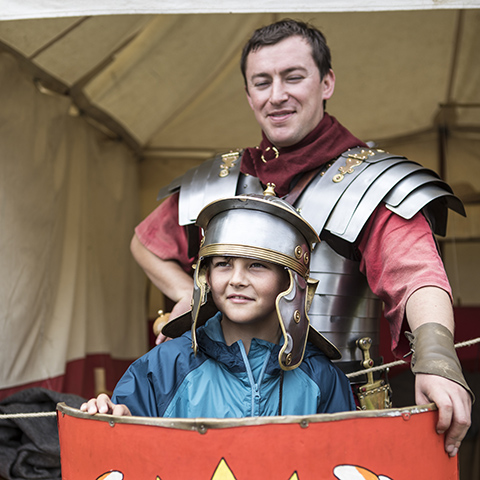 The Guard will transport visitors back in time to ancient ‘Viroconium’, as Wroxeter was known to the Romans, as their colourful legion demonstrate the combat skills, battle tactics, and artillery power that made the Roman army such a formidable fighting force. Book online and save!

Admission to the event is included in the standard admission ticket price. If you are a Member then your ticket will be free. You don’t need to book your visit in advance, but you will always get the best price and guaranteed entry by booking online ahead of your visit. If you purchase a walk up ticket on the day of the event, the ticket price will be higher than those listed above.

You can book your advance ticket online up to 8.45am on the day you want to visit. Your booking is for the site/event only and does not guarantee a car parking space, which may carry an additional charge. On the day, make sure you bring your booking confirmation with you.

Simply click on the Buy Tickets button above. This will take you to our online booking system. Once there simply select the date for the event you want to attend. Please make sure you bring your booking confirmation with you when you visit. If you are a Member please remember to bring your English Heritage Membership card. Members are able to book event tickets at the Member rate for those included in the membership only.