The 1st Duke of Wellington bought Apsley House in 1817 and embarked on a programme of rebuilding and refurbishment to transform the house into a splendid Regency residence.

Most of his paintings collection came from the Spanish Royal Collection, rescued from a fleeing Joseph Bonaparte after the Battle of Vitoria in northern Spain. The paintings were later officially given to Wellington by King Ferdinand of Spain. Two hundred were recovered and today 83 still hang at Apsley House. They range in date from Juan de Flandes’s Last Supper of 1504 to Anton Raphael Mengs’s Holy Family, completed in 1765.

After the Battle of Waterloo, Wellington also bought some important old masters. He purchased Dutch paintings when a Parisian financier sold off his collection at the Le Peyrière sale in 1818. From this period onwards he also collected modern portraits, mostly of his comrades-in-arms and by Thomas Lawrence. His most important commission was Sir David Wilkie’s Chelsea Pensioners.

The Duke’s collection also contains important pieces of Meissen and Sèvres porcelain and a large assortment of silver.

The shield, designed by Thomas Stothard, was inspired by the classical description of Achilles’ shield in Homer's Iliad and by contemporary interpretations of ceremonial shields. The central group shows Wellington being crowned by the figure of Victory. The surrounding ten reliefs show scenes from his military career. The shield was displayed every year at the Waterloo Banquets held at Apsley House from 1820 to 1852. 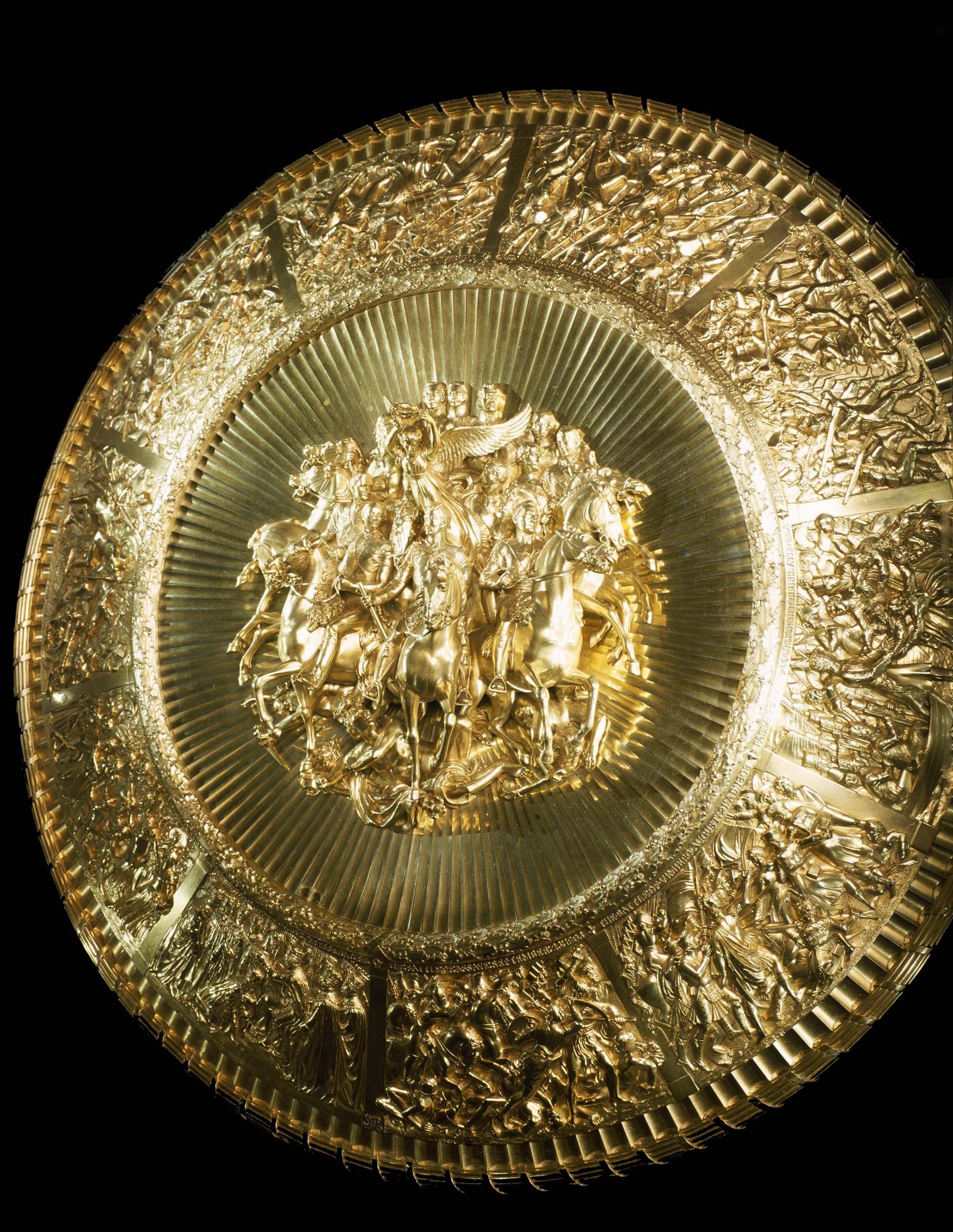 Antonio Canova - Head of a Dancer

Head of a Dancer

Presented to Wellington by the sculptor Canova, this bust arrived in England in 1818. It is one of four made by Canova for the leading British statesman involved in the restitution of Italian works of art after the Battle of Waterloo. The four 'ideal heads', as they were called, epitomised female beauty. Taking his inspiration from the great classical busts of antiquity, Canova created four 'ideal' forms of female beauty. 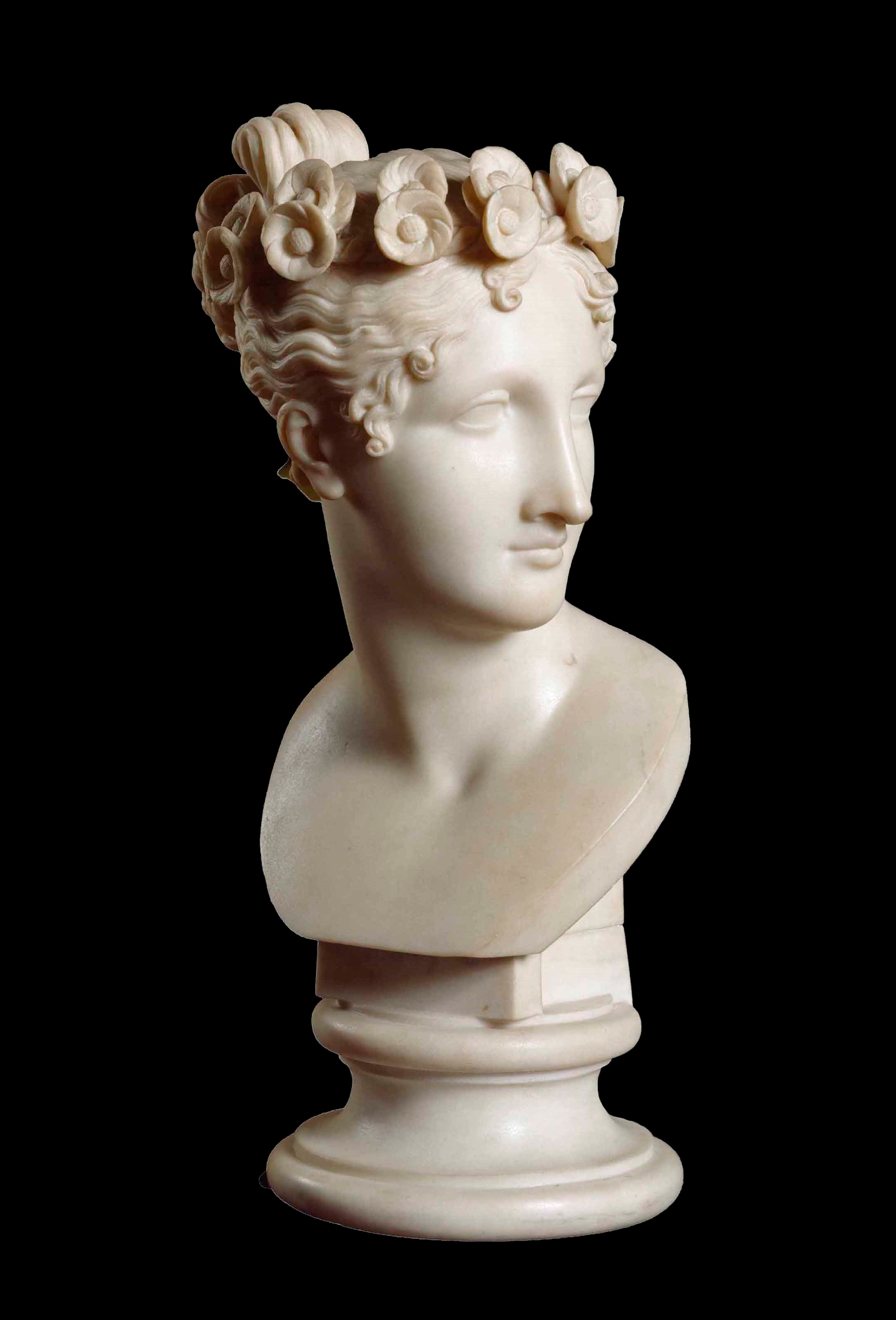 The Portuguese Centrepiece is part of a 1000-piece service gifted to Wellington in 1816, from the Portuguese nation. It is a unique design produced to honour the Duke's victory over the French in Portugal during the Peninsular Wars (1807-1814). It was designed by Domingos António de Sequeira, the leading Portuguese court painter. The service was made in the Lisbon Military Arsenal. It took 150 men four years to produce. 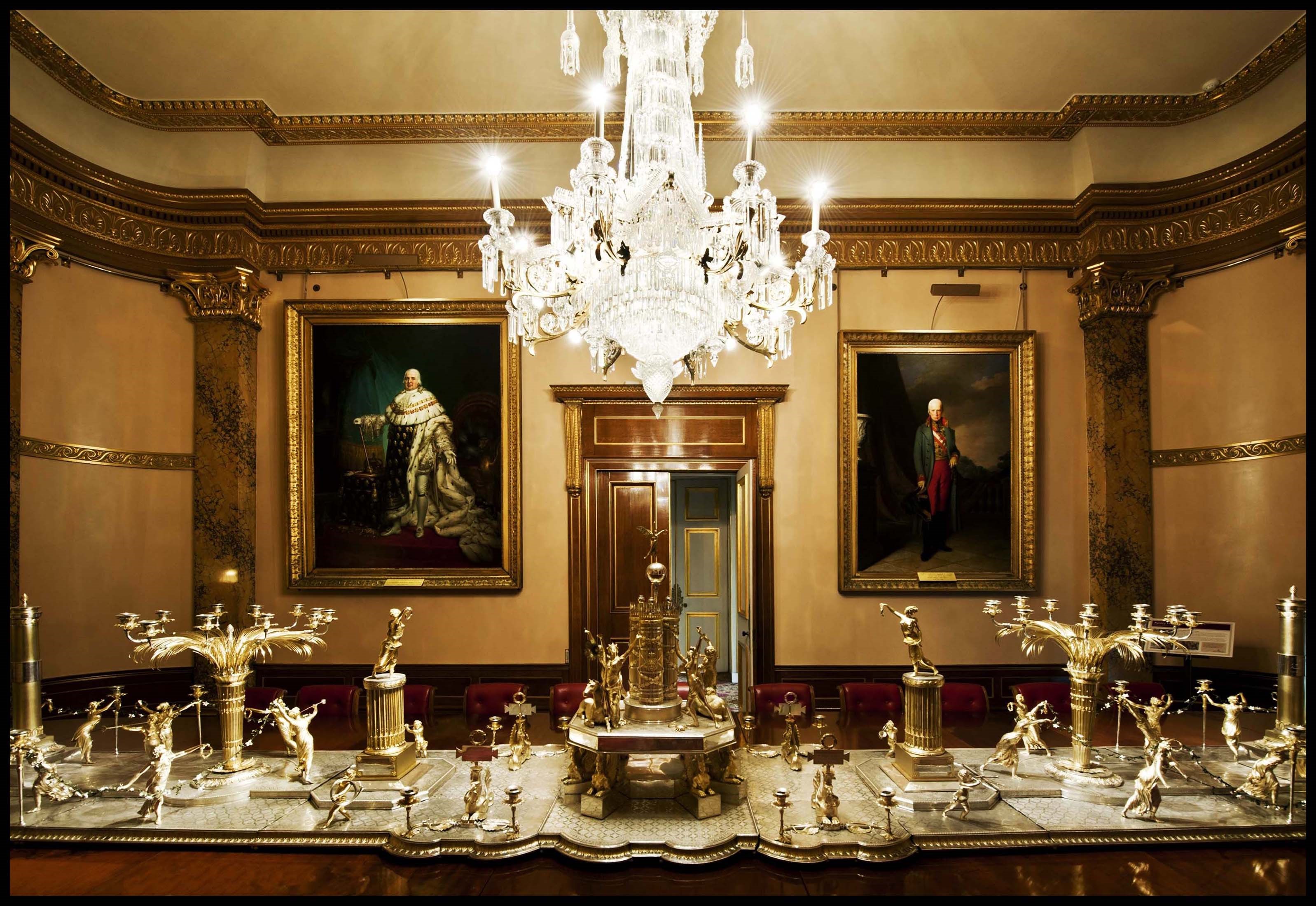 The most iconic portrait of Wellington by the celebrated regency painter Sir Thomas Lawrence. Wellington disliked sitting for portraits but he respected Lawrence and they became friends. Wellington commands the canvas, the very embodiment of military sang-froid. For all its military overtones this was commissioned as a gift for a lady, Marianne Patterson, a wealthy American heiress whom Wellington greatly admired.

Napoleon as Mars the Peacemaker

Commissioned in 1802, this colossal statue of Napoleon was sculpted by Canova in Rome. Completed in 1806, the statue did not arrive in Paris until 1811. It was unveiled at the Musée de Napoleon (now the Louvre) but Napoleon did not like the statue. He declared it 'too athletic', and it was never displayed in public. After the Battle of Waterloo it was bought by the British Government and presented to Wellington. 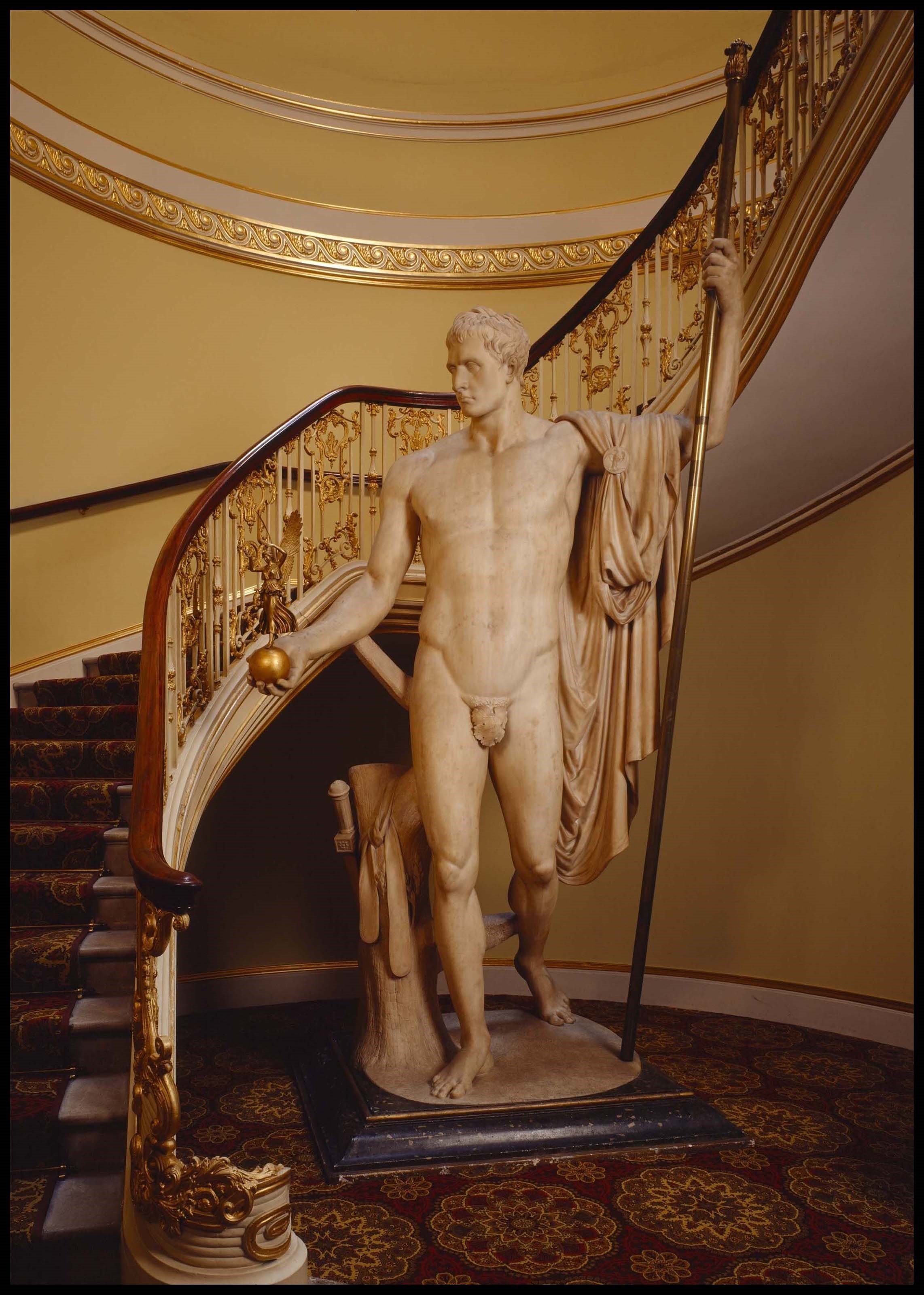 This pair of Siberian porphyry torchères was given to Wellington by the Tsar of Russia as part of a diplomatic gift. They were made at the state stone-carving factory near the river Korgon, and were originally intended for the Winter Palace. They were sent to London to be placed in the new Waterloo Gallery at Apsley House. They underwent considerable alterations. The original design included a three-tiered top with a stone amphora. 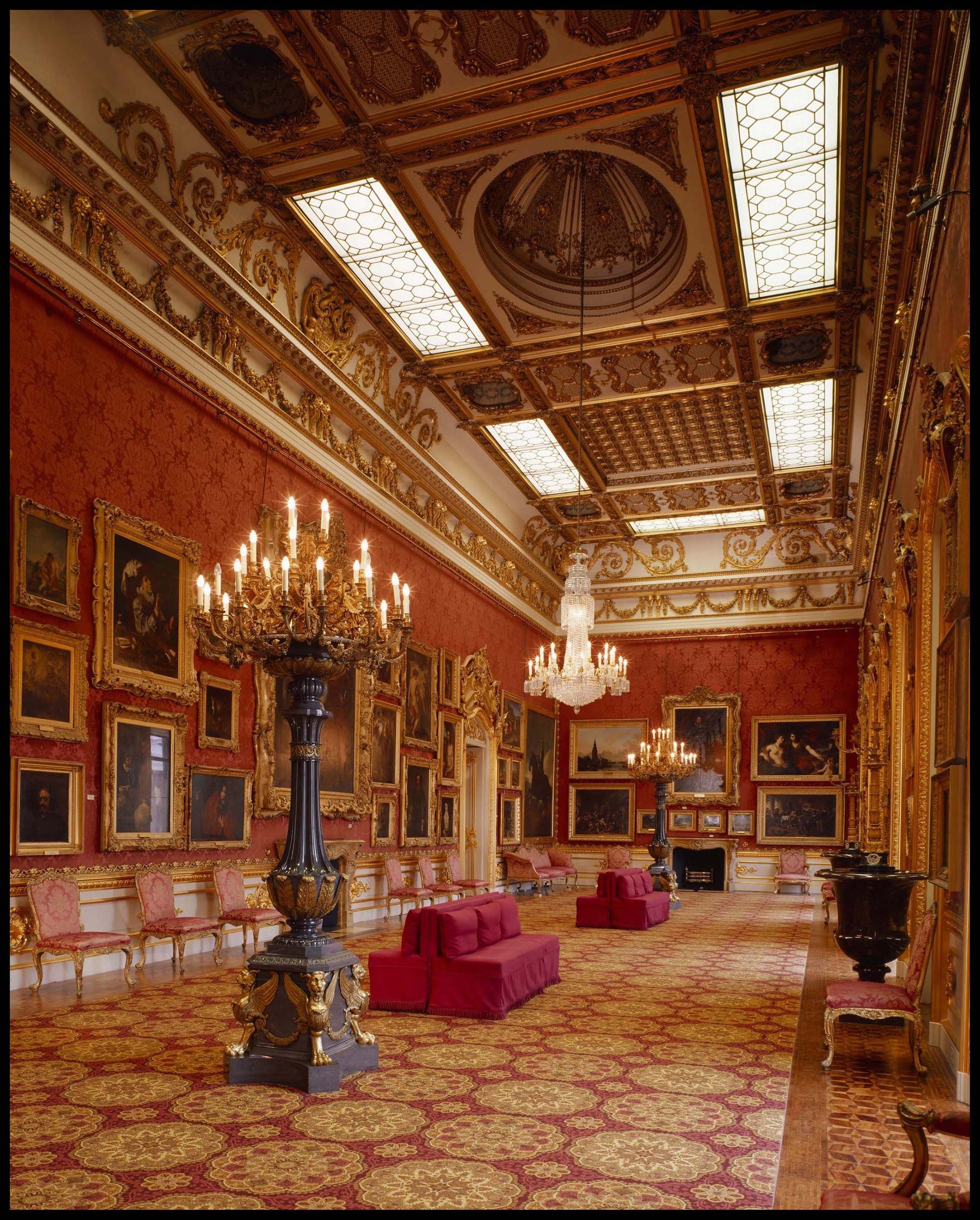 Antonio Allegri, called Correggio - The Agony in the Garden

The Agony in the Garden

This painting was described in Vasari's Life of the Artists in 1568 as 'the rarest and the most beautiful of his productions'. By the late 1650s the picture was in the Spanish Royal Collection. Christ is shown in the garden of Gethsemane, illuminated by an angel, while, to the right, three of his apostles sleep. Dawn is breaking, and the arrival of Judas and the soldiers who will arrest Jesus will bring to an end the peace of the garden. 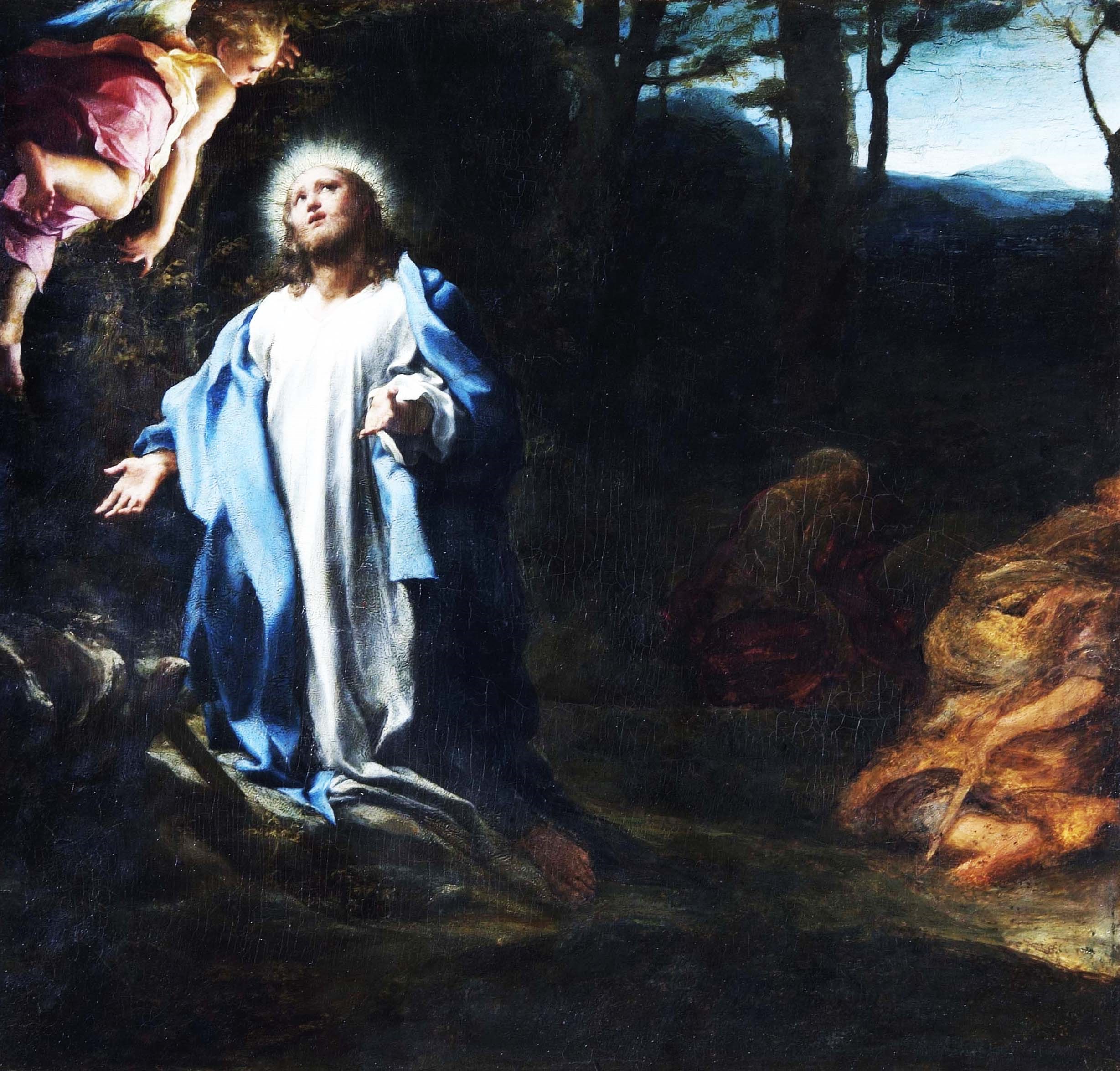 This was the most expensive painting commissioned by Wellington. He told Wilkie that he wanted a 'parcel of old soldiers at the centre, perhaps outside a public house, chewing tobacco and talking over old stories'. The artist finally decided on a scene set off the King's Road with the Chelsea Hospital on the left. The figure at the table is a Chelsea Pensioner, reading Wellington's famous Waterloo Dispatch to the assembled crowds. 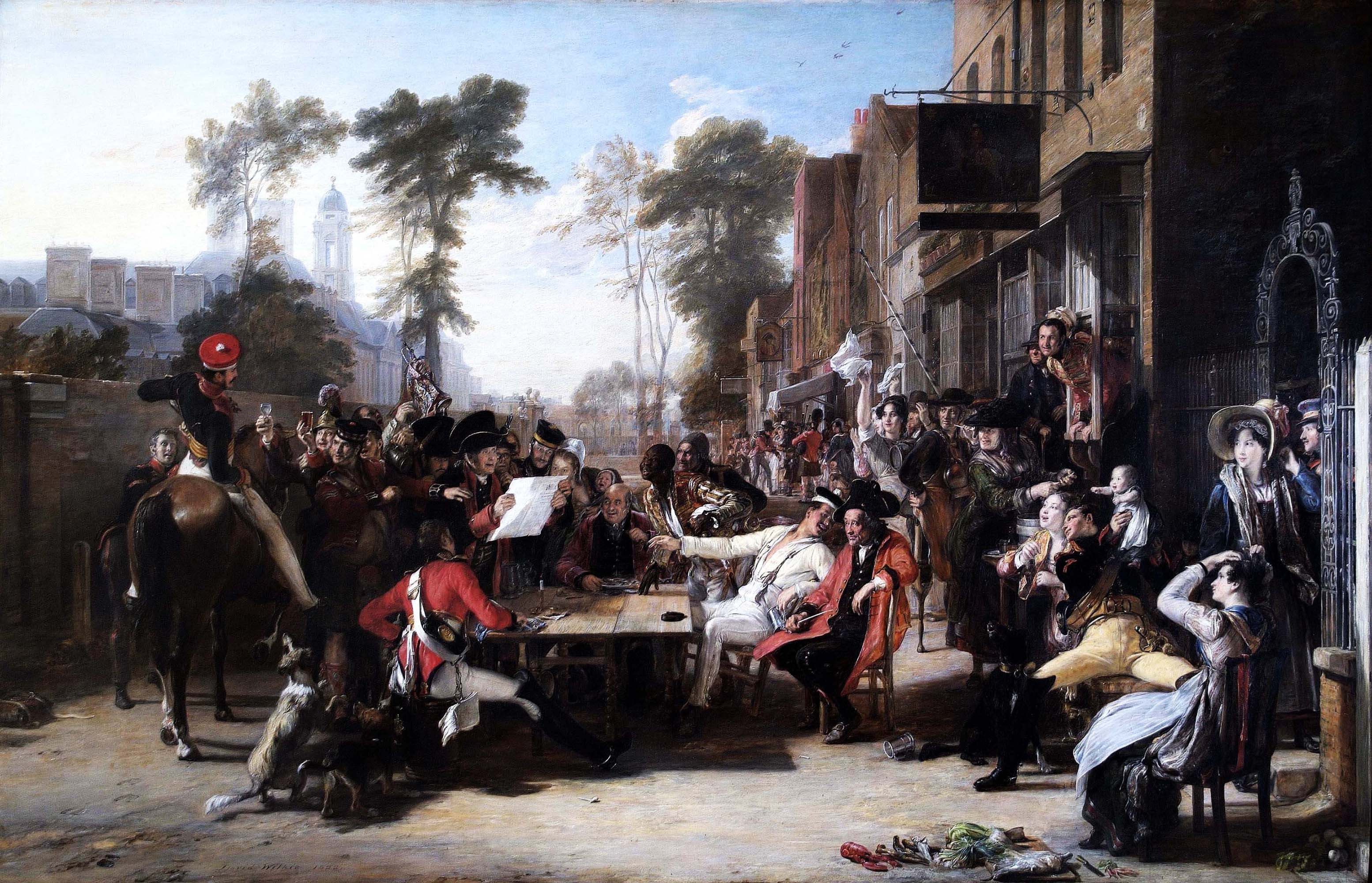 Equestrian Portrait of the 1st Duke of Wellington

Wellington sat for Goya in August 1812, just after his victory at the Battle of Salamanca in Spain. Wellington entered Madrid a hero. In this portrait he is shown wearing civilian dress, his preferred uniform when on campaign. Although Wellington was slender with fine features, here he is shown with a broad, compact body, and solid face. When the painting was x-rayed in the 1960s, it was discovered that Wellington's head had been added to a previously painted body. 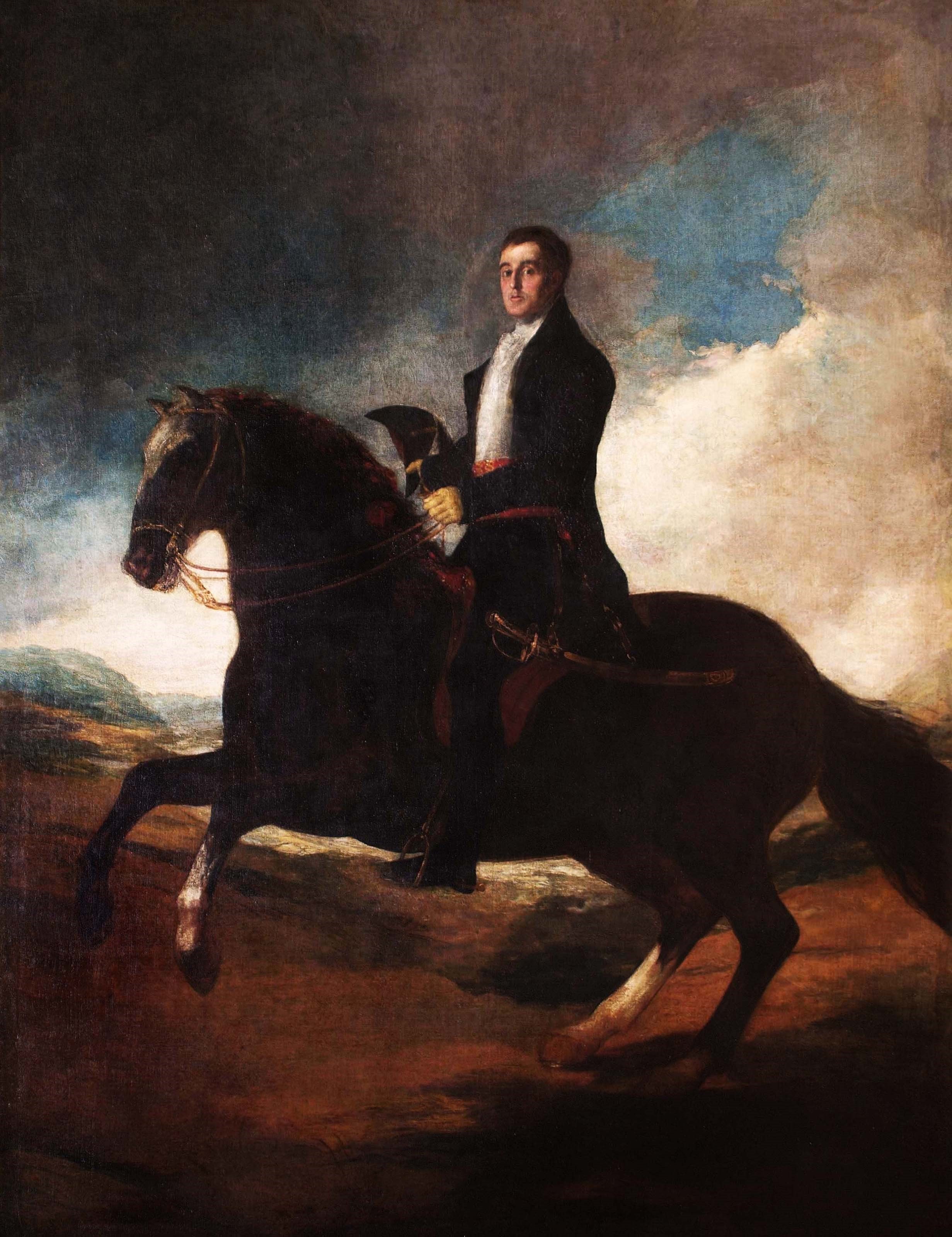 Diego Velázquez - The Waterseller of Seville

Velázquez's early works depicted scenes of everyday life which are known as bodegones. Typically they are set around people eating or drinking and are painted with strong contrasting areas of light and dark, very much influenced by the work of the Italian artist Caravaggio. 'The Waterseller of Seville' is the most famous of the bodegones paintings. Once part of the Spanish Royal Collection, it was captured on the battlefield at Vitoria in Spain. 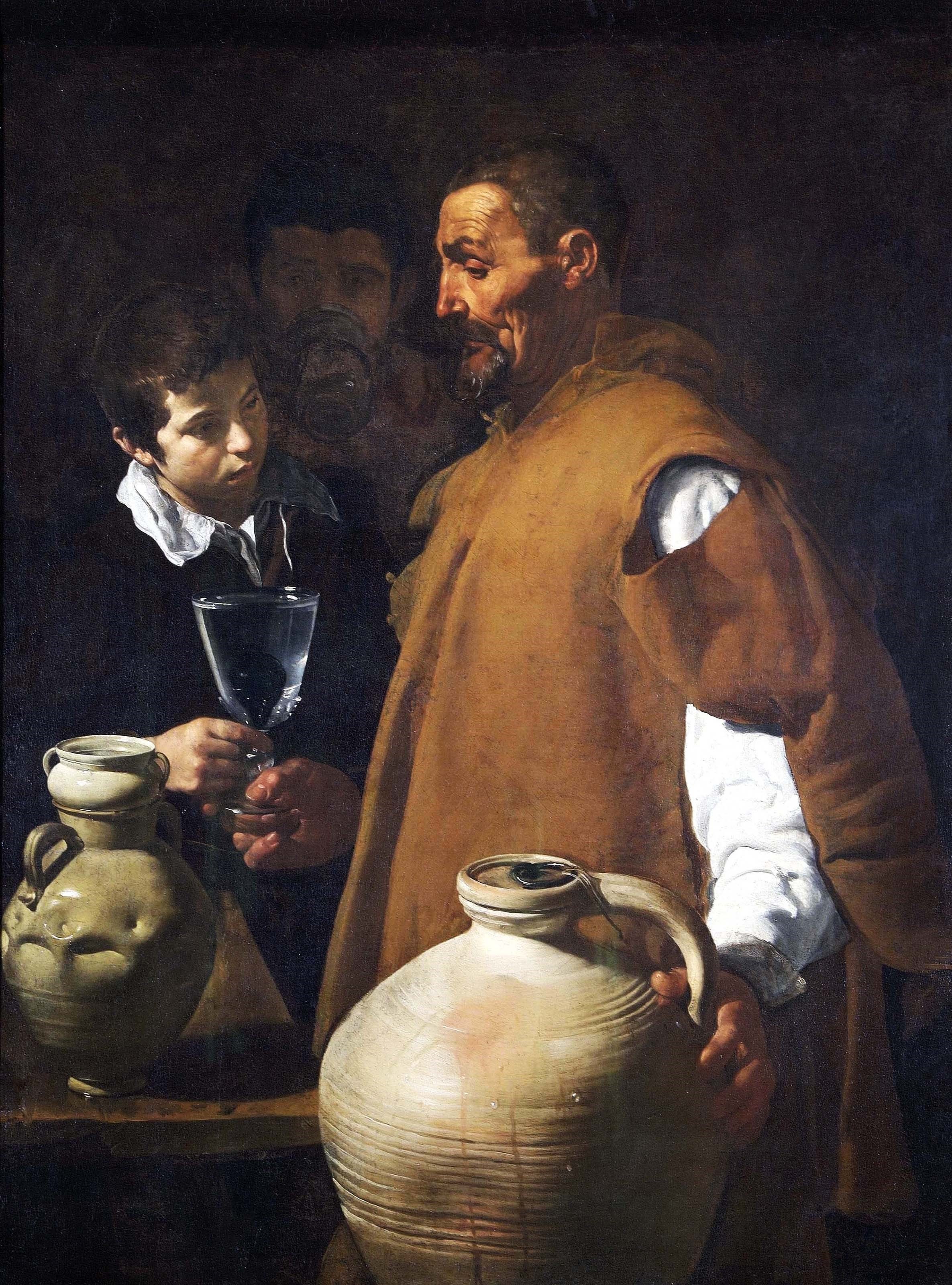 A dessert plate from the Saxon service presented to Wellington by King Frederick Augustus IV of Saxony. The whole service was personalised for Wellington; hand-painted plates show places and events connected to his life. This plate shows Apsley House as it would have looked in the late 18th century, when it was built by Robert Adam - and before Wellington's architect transformed the façade and extended the house in the 1820s. 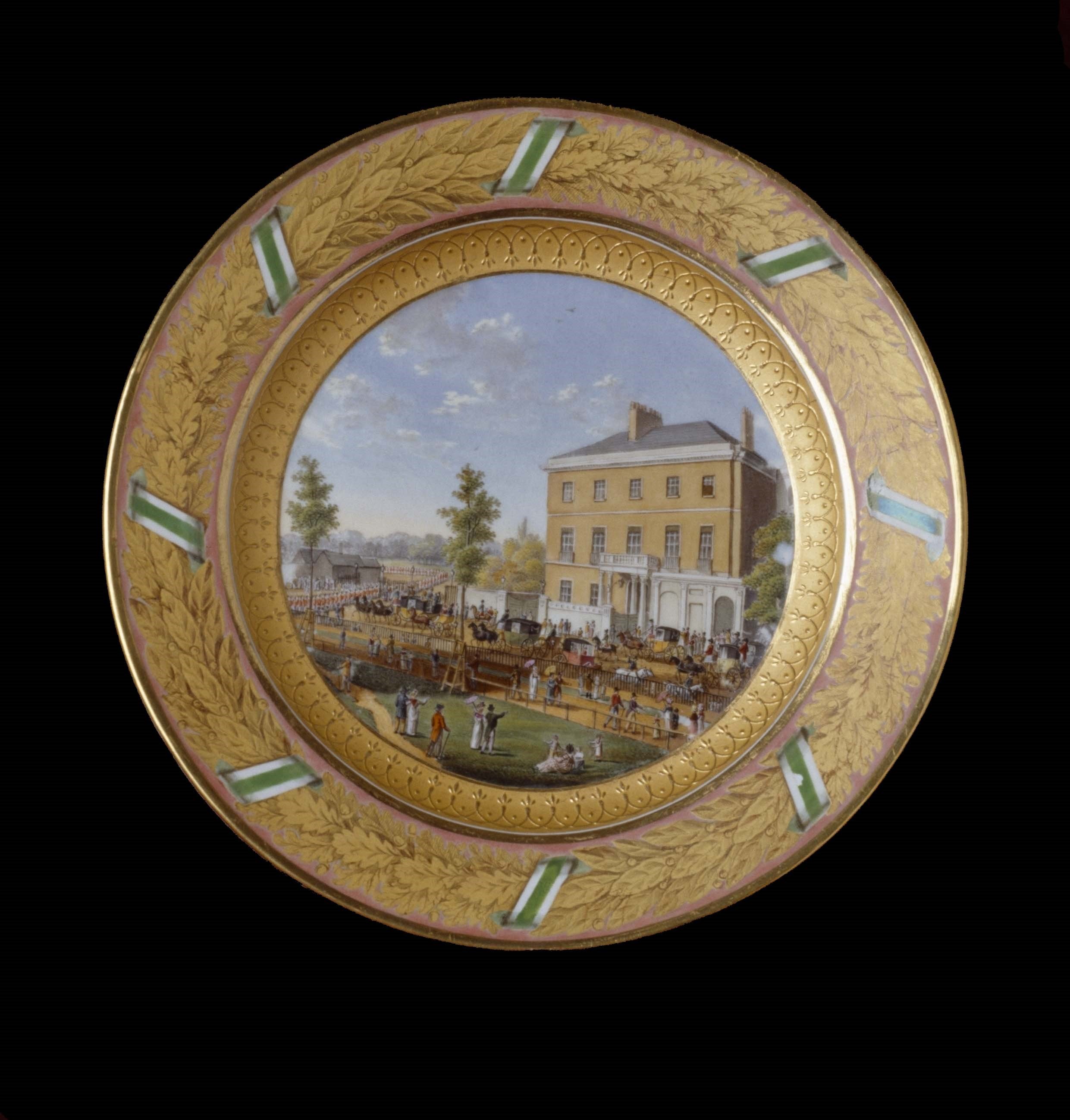 This painting shows a young woman at the bottom of a flight of steps with a finger raised to her lips. She has a large bunch of keys at her waist, suggesting that she is perhaps the mistress of the house. She draws the viewer into the scene beyond. To the right we see a young maid distracted from her duties by the attentions of her lover. Such scenes were common in Dutch genre pieces. 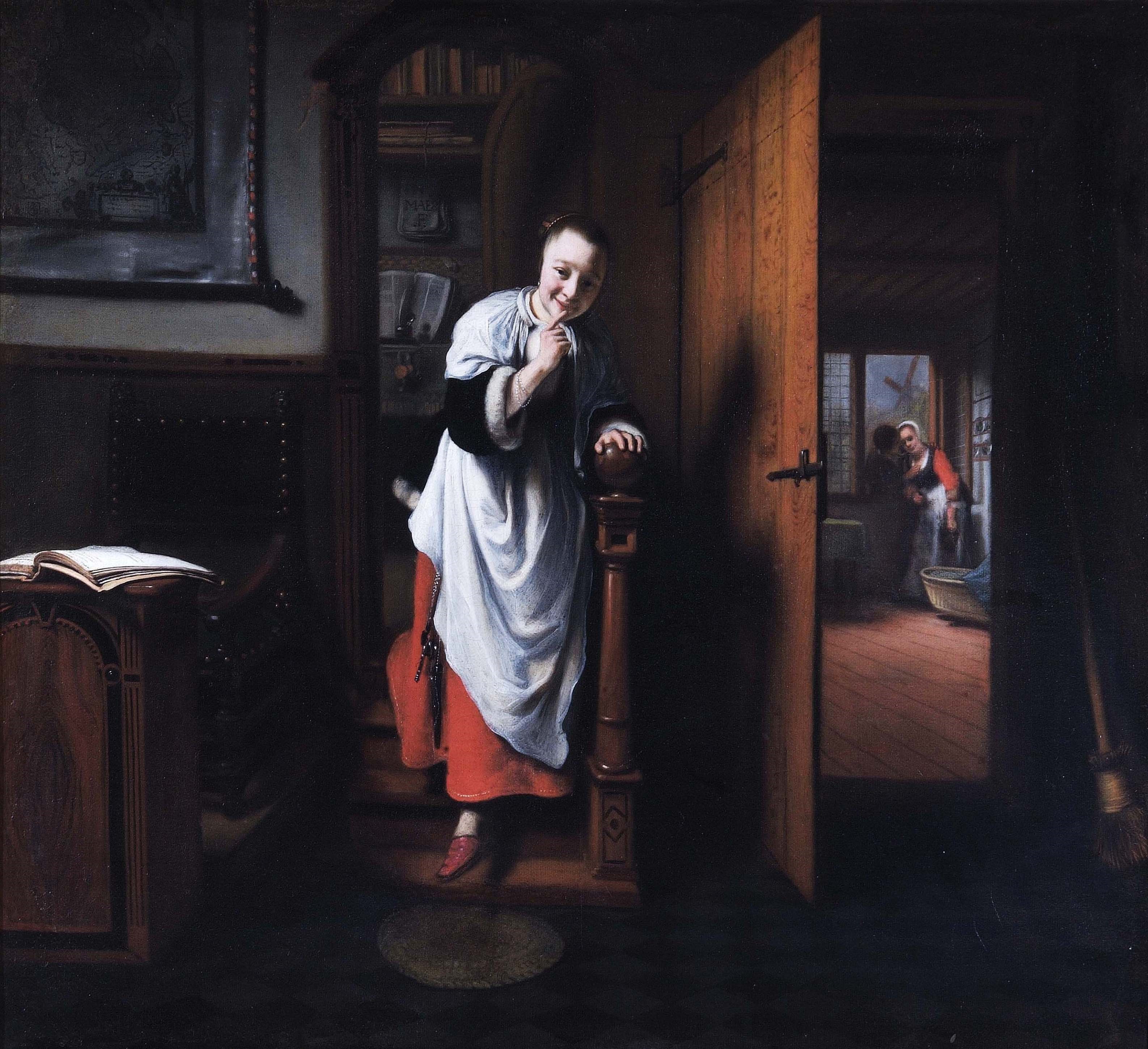 Titian - Portrait of a Lady Known as Titian's Mistress

Portrait of a Lady Known as Titian's Mistress

This painting depicts a semi-clothed lady dressed in a white shift, red cloak, fur wrap and black feathered cap. She is probably a courtesan or the mistress of one of Titian's clients. A signature, TITIANVS, was discovered on the left edge of the painting, proving that it is by Titian or his workshop. There is an unfinished painting underneath depicting a seated woman with a raised arm plucking a veil, which is similar to three other paintings showing Venus at a mirror by Titian's circle. 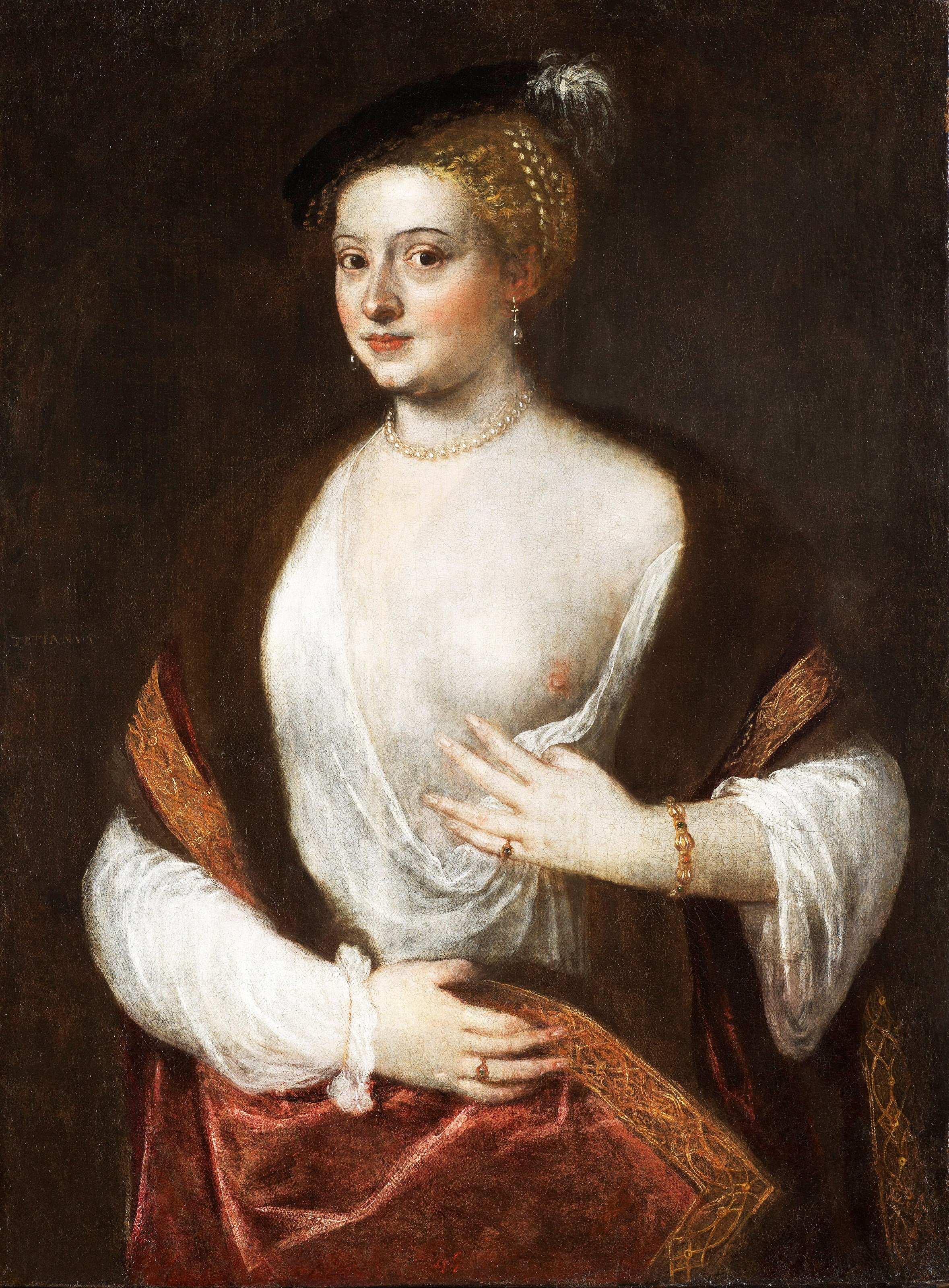