The remains of Bury St Edmunds Abbey today are extensive, but even so do little justice to what was once one of the largest and grandest monasteries in England. Its name derives from the martyred King Edmund, who was killed by the Danes and whose subsequent enshrinement in 903 turned the abbey into a place of pilgrimage.

Bury’s importance led to its destruction. When Henry VIII closed the abbey in 1539, it was systematically demolished to demonstrate the king’s power and control. Apart from the abbot’s palace, the site was allowed to become a quarry for local building stone. The ruins now lie mostly within a public park.

The martyrdom of St Edmund, depicted in a 12th-century manuscript
© The Morgan Library & Museum

Before England was unified under one king, Bury St Edmunds (then known as Beodricsworth) was in the kingdom of East Anglia. East Anglia was converted to Christianity in the reign of Sigeberht (c.630–40), who was said to have retired to a monastery. Not long afterwards he was killed when his kingdom was attacked by Penda, King of Mercia. Later generations believed that the monastery he retired to was at Beodricsworth.

Edmund was a Christian king of the East Angles who reigned from about 855 to 869. Little is known of his life, other than that Danes invaded his kingdom in 869 and killed him. Within a generation of his death he was revered as a martyr.

Around 985–8 a French monk, Abbo of Fleury, wrote an idealised life of St Edmund, painting him as a saintly ruler who died for his faith. Abbo describes how Edmund was tied to a tree, shot full of arrows and then beheaded. When supporters went looking for his body, they found a wolf guarding the head at a place called Haegelidun. Recent research has identified its possible location as a field about 6 miles from Bury.

Edmund’s remains were moved to a new church at Bury at some point between about 889 and 945. A large wooden church was built to house his remains, and Edmund, King of England (r. 939–46), gave it large estates. 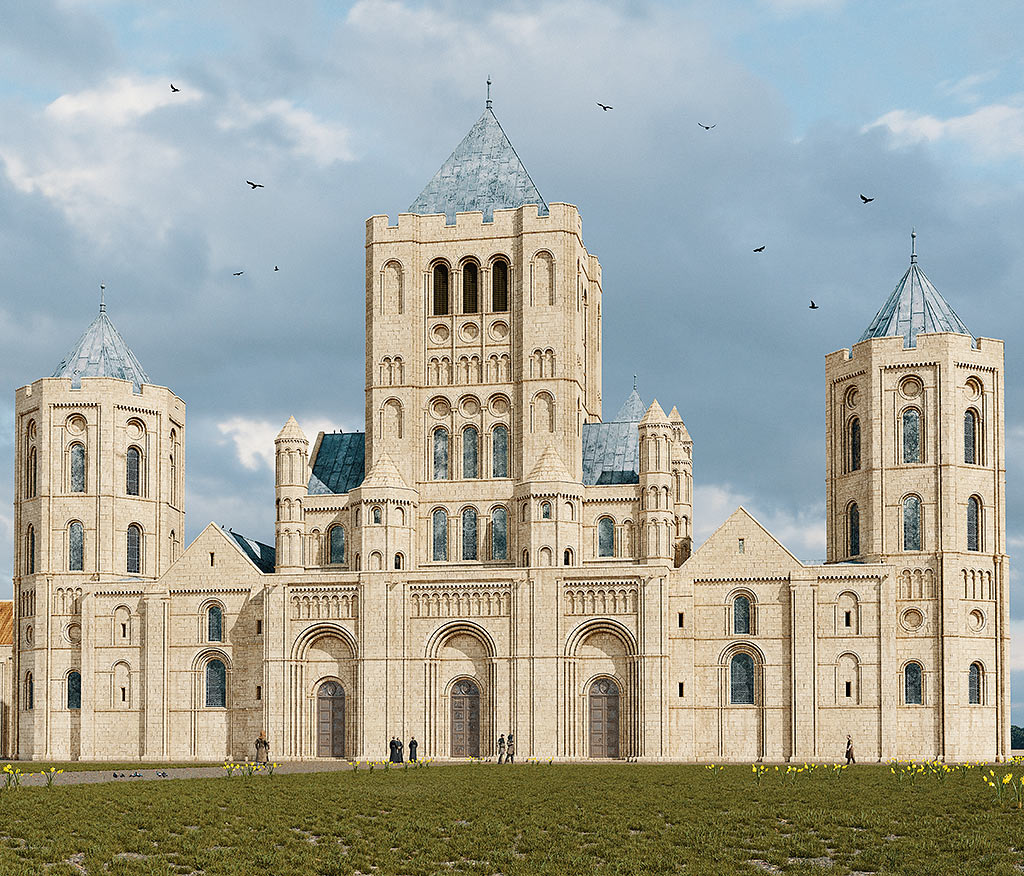 The Benedictine abbey itself was established in 1020 by King Cnut (r.1016–35), who sponsored a rebuilding, including a rotunda to replace the wooden church. Edward the Confessor (r.1042–66) greatly increased the abbey’s privileges and at the time of the Norman Conquest Bury ranked fourth among English abbeys in wealth and political importance.

In 1065 the monks elected Edward the Confessor’s French-born doctor, Baldwin, as abbot. Under his leadership, from around 1080 the monks began to replace the Saxon church on an ambitious scale, worthy of the shrine of St Edmund and its growing number of pilgrims. In 1095 the first stage – the eastern arm of a huge new abbey church – was finished, and St Edmund’s remains were ceremonially transferred from the old rotunda to a new shrine there.

The work, progressing from east to west, took years to complete. Finally the spectacular west front was finished around the turn of the 13th century under Abbot Samson (1182–1211), who added a great central tower and lower octagonal towers to either side. At 485 feet (148.5 metres) long, the church was the third longest in Christendom. Its huge scale testified to the abbey’s wealth and the abbots’ pride and sense of independence.

After a devastating fire in 1465, the church was rebuilt with a stone vault and a new central tower. A late 13th-century manuscript illustration depicting King John with monks of Swineshead Abbey, who were rumoured to have poisoned him
© British Library Board (Cotton MS Vitellius A XIII, fol 5v)

The abbey and the crown

As one of the richest monastic communities in England, Bury occasionally had tense relations with the Crown. When an abbot died, the king had the right to receive his share of the abbey’s income, and several times – in 1097–1100, 1107–14 and 1180–81 – the Crown refused to allow the monks to elect a new abbot, so as to benefit from the vacancy.

King John (r.1199–1216) forced the monks to keep the abbacy open for seven years after the death of Abbot Samson in 1211, and refused to acknowledge Samson’s successor. In 1203 John stayed at the abbey at vast expense, without making any offerings in return. In 1214 he visited again and lectured the monks on his prerogatives in their own chapter house.

John’s behaviour may well have inspired the abbey to play an important part in the resistance to his tyrannical rule. Many of the earls and barons of England met in the abbey church on 20 November 1214, under the leadership of Stephen Langton, the Archbishop of Canterbury. The archbishop read to them Henry II’s coronation charter, which guaranteed certain basic freedoms, and they swore an oath on the high altar to uphold the charter and resist John’s misrule. This meeting was the prelude to the barons’ celebrated confrontation with King John at Runnymede in June 1215, when he was forced to agree to Magna Carta.

The abbey’s Great Gate, which was rebuilt at the townspeople’s expense after it was destroyed during the riots of 1327

The abbey may have played an important role in the defence of English liberties against the Crown, but where the monks’ treatment of their own estates and the communities living on them was concerned, they were at times accused of domineering and exploitative behaviour. One confrontation between town and abbey in 1292 ended in a compromise. Four of the town’s gates were to have keepers appointed by the burgesses, with one appointed by the abbey’s sacrist – but the burgess’s nominees had to be approved by the sacrist.

But in 1327 the town erupted in rebellion, later known as the ‘Great Riot’. Over 300 townspeople besieged the abbey, broke in and looted it. They also plundered 13 of the abbey’s manors and farms. The rioters stole £6,000-worth of property: £1,000-worth of plate, 100 horses, 120 oxen, 200 cows, 300 bullocks, 300 pigs and 10,000 sheep. They also destroyed the abbey’s Great Gate – its main entrance. When order was finally restored, the townspeople made recompense to the abbey by rebuilding the Great Gate on a magnificent scale.

When the Peasants’ Revolt broke out in 1381, the abbey was once more a target. The Suffolk rebels, led by Jack Straw, sacked the abbey again, and murdered the prior, John of Cambrie. 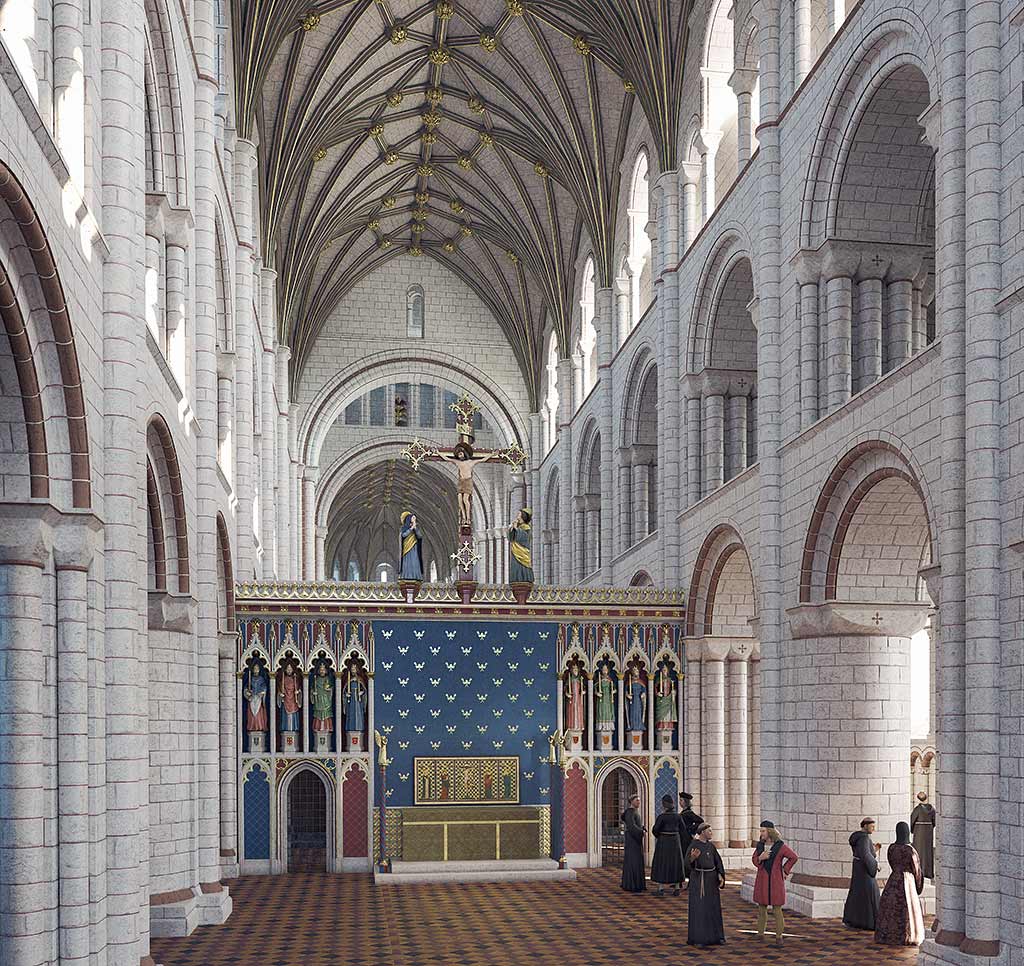 In 1533 John Reeve of Melford, the last abbot of Bury, was elected to the post. The commissioners appointed by Thomas Cromwell to investigate abbeys and find reasons for closing them could find little fault when they visited in 1535, and accused the abbot and monks of a cover-up.

The first stage of Bury’s dissolution came in 1538, when there were 62 monks living there. Several of the younger monks were forced to leave. Commissioners were sent to assess the abbey’s wealth and take down the shrine, and seized many valuable objects. On 4 November 1539 Abbot Reeve finally surrendered the abbey, which was one of the last to be closed. The abbot, prior and the 42 remaining monks were pensioned off. Bury’s vast estates were seized, many of them being granted to the king’s friend Charles Brandon, Duke of Suffolk.

Given the abbey church’s status and splendour it could have been reprieved, and made into a cathedral for a new diocese, as happened to six other great monastic churches. However, demolition began almost immediately. Within weeks the lead was stripped from the roofs. Demolition crews moved in and systematically demolished the abbey church and the central group of buildings, stripping off the fine facing stonework for reuse elsewhere.

The remains of the abbey church today, looking west towards the present cathedral

The near-complete destruction of the abbey church and main group of buildings was probably carried out in a few years. The lower part of the west front survived as a shapeless ruin. In the 18th century a number of small houses were built within its shell, and it continues to house six private residences.

Much of the wider site, however, survived the depredations of the mid 16th century. The precinct walls remain largely intact, together with the Church Gate, the Great Gate, and the two main parish churches of St James and St Mary. The abbot’s palace remained standing as a residence, then a school, until it was demolished in the mid 18th century. In 1821 a botanic garden was laid out over part of the site of the Great Court.

Although there have been some archaeological investigations since the beginning of the 20th century, much of the site remains unexcavated.