The Corbridge collection is the largest of the Hadrian’s Wall collections managed by English Heritage, with over 34,000 finds. Its inscriptions and sculptural material are the best collection in the north of Britain in terms of depth, range and scope. Deities from across the Roman Empire are represented in the religious dedications, and the names of units and individual soldiers are given in the numerous building inscriptions.

Evidence for the civilian element of the town at Corbridge is provided by the large number of personal and feminine items. Finds indicating pottery manufacture and metalworking, as well as the two large granaries, show Corbridge’s role as a supply base for the forts on Hadrian’s Wall.

This carved slab records building work by the 20th Legion at Corbridge. A vexillation (detachment) of the 20th Legion was based here at Corbridge, along with a vexillation of the 6th Legion. They left their mark through the building work they carried out, with the sign of the boar, their badge. The soldiers helped to administer the supplies stored here for Hadrian's Wall. 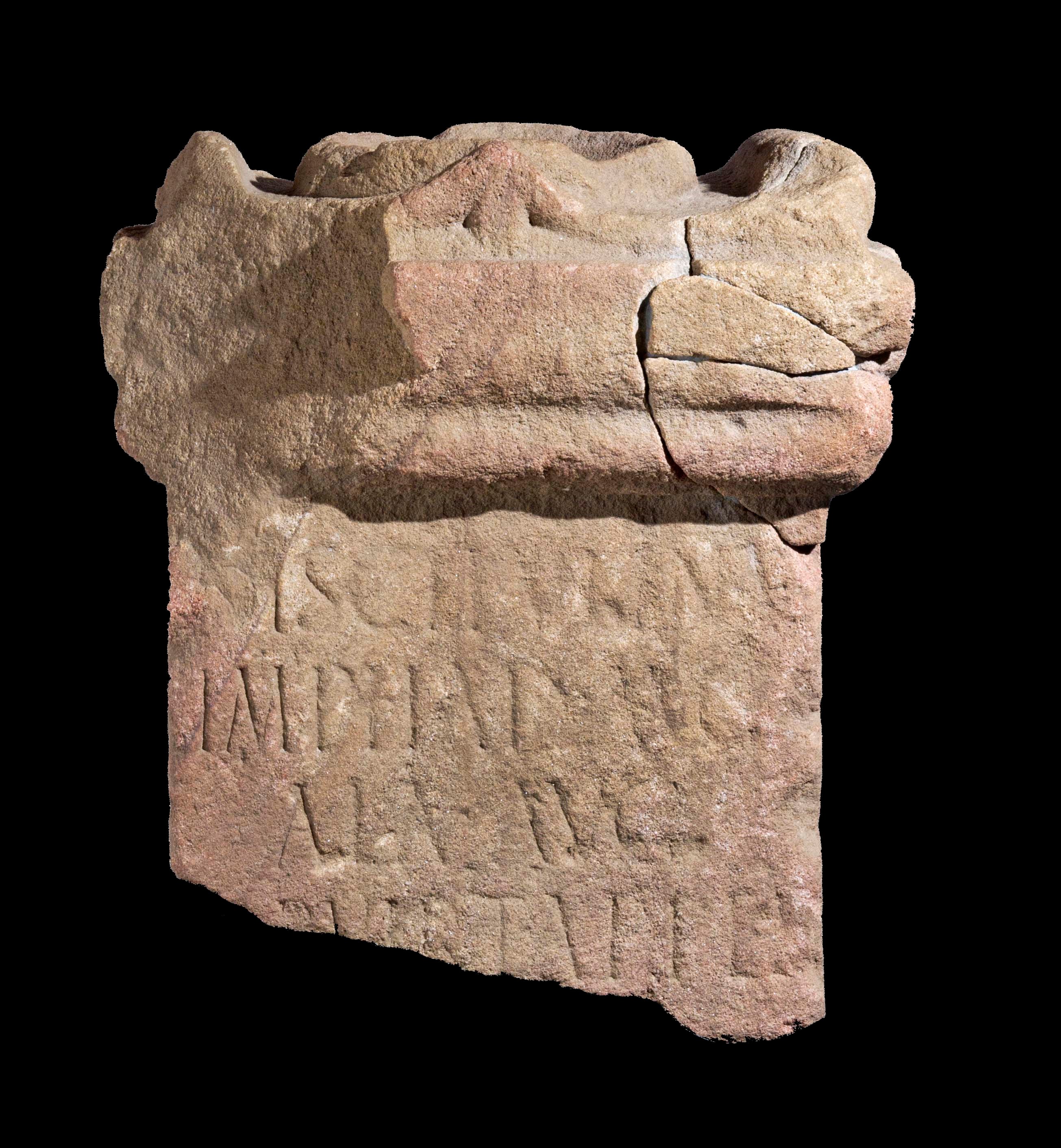 Corbridge has altars and dedications to a wide range of deities, who originated from all over the Empire. This altar is a prime example of the hybrid nature of Roman religion, with Brigantia (a Celtic goddess) being linked with Juno Caelestis (the Syrian consort of Jupiter Dolichenus). The army helped to spread the worship of eastern gods such as Dolichenus and Caelestis. 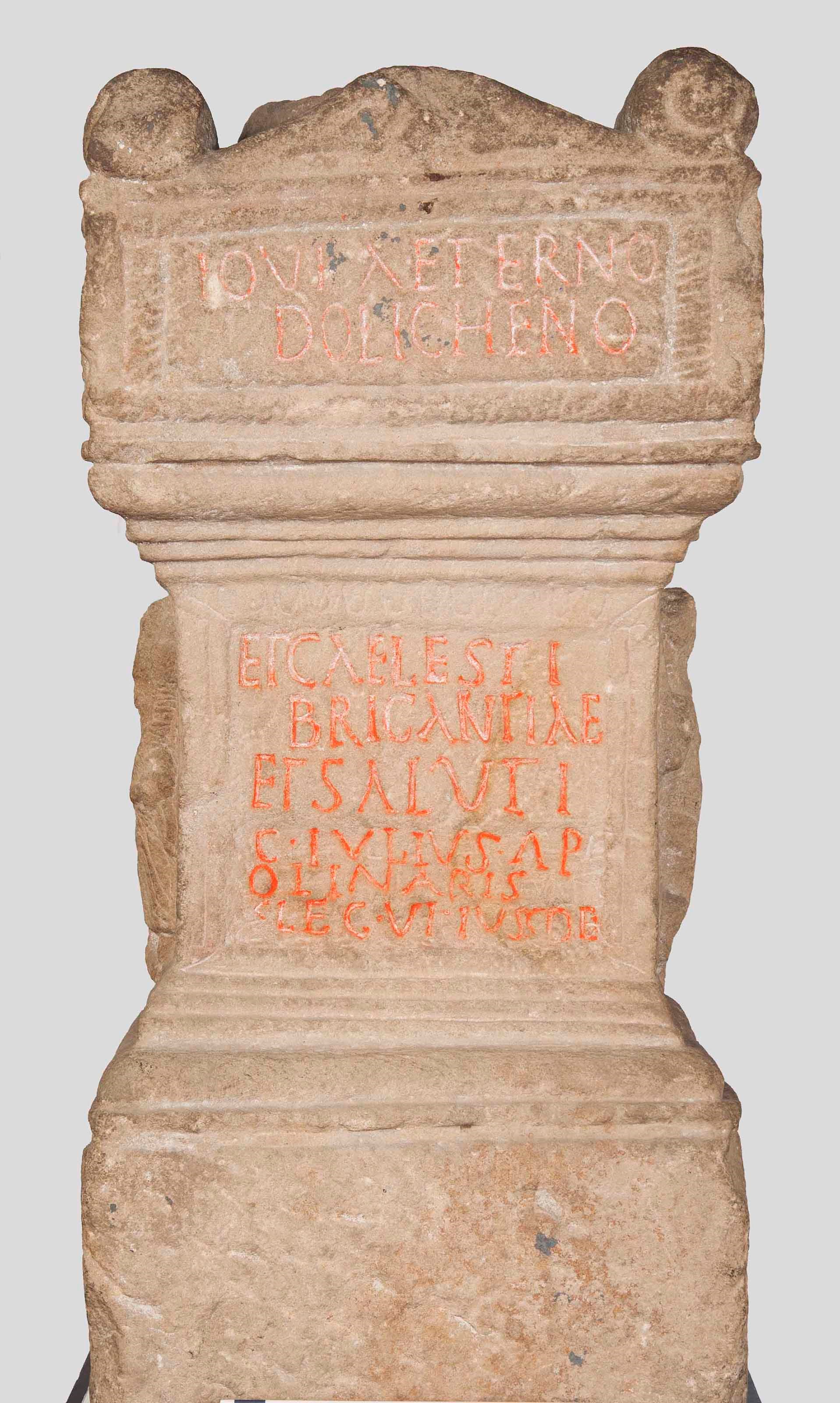 Corbridge was a supply base and administrative centre for the Roman army. There would have been scribes in the town recording shipments of grain and the production of materials for the army. Many styli have been found at Corbridge, providing evidence for writing. Documents were sealed using these seal boxes, which were often decorated with enamel or gilding. 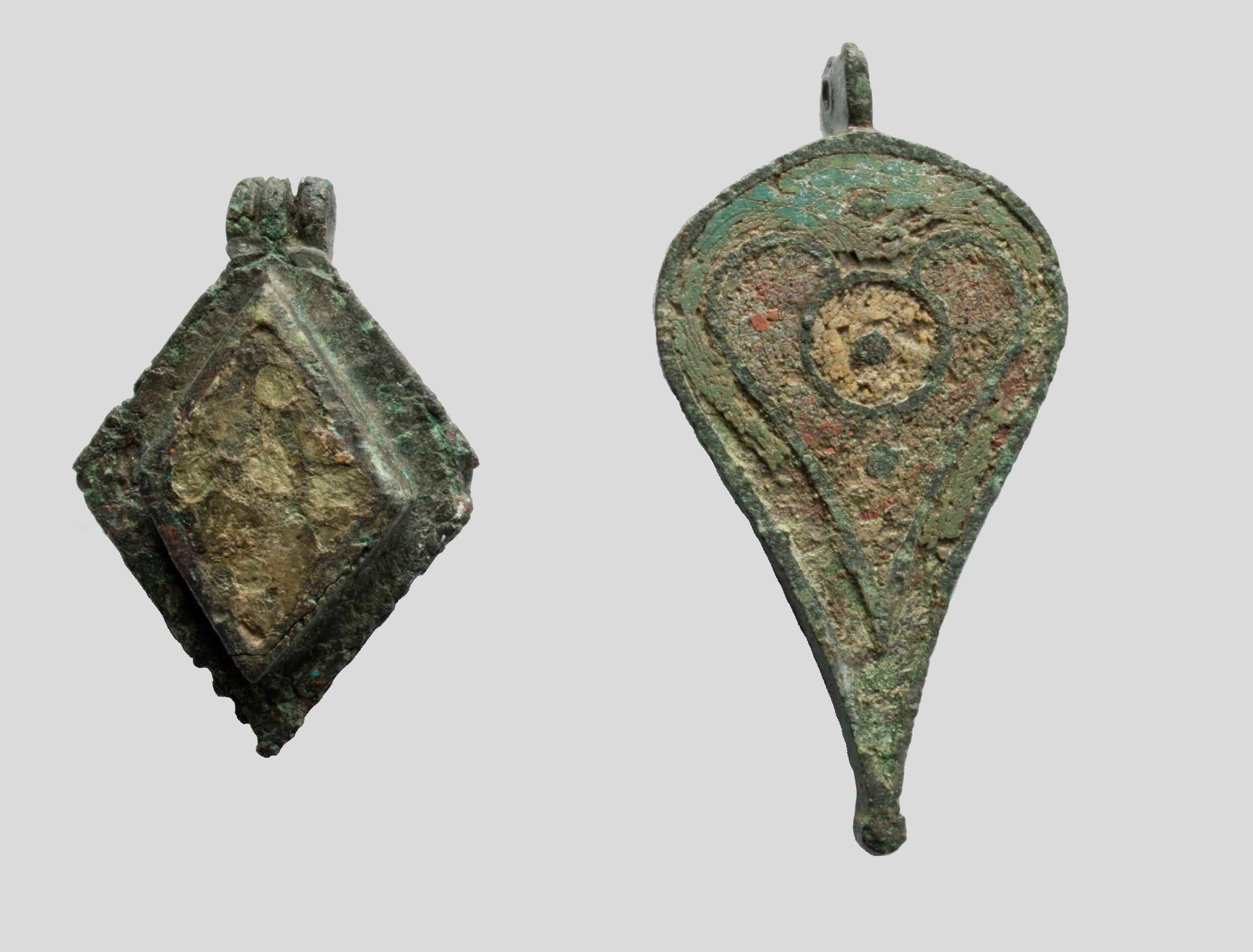 Statue of a Lion Attacking a Young Stag

Statue of a Lion Attacking a Young Stag

This statue is a wonderful example of the skill of the stonemasons at Corbridge in the Roman period. The lion is a symbol often used on funerary monuments to symbolise death's victory over humans. The statue was originally made to adorn the top of a tomb, but it has been re-used as a fountain head, with a hole made through the lion's mouth, removing his teeth. It is a perfect example of Roman recycling. 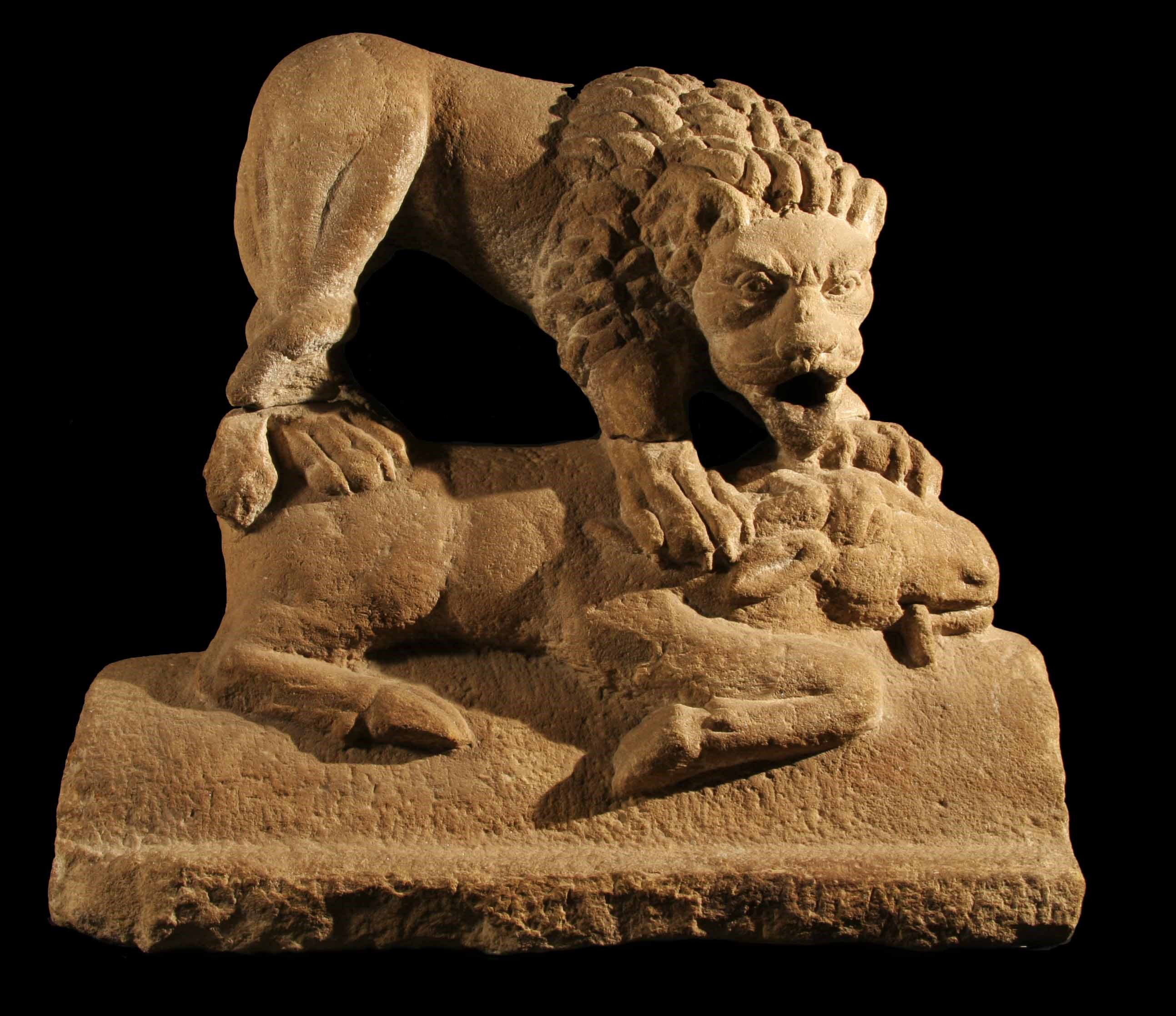 This almost complete vessel has ornate decoration representing a hunt with a dog chasing a rabbit. Hunting was a popular pastime for the Romans and it would have been a leisure activity of the soldiers based at Corbridge. This type of pottery is found all over Roman Britain and was used as tableware rather than cooking vessels. 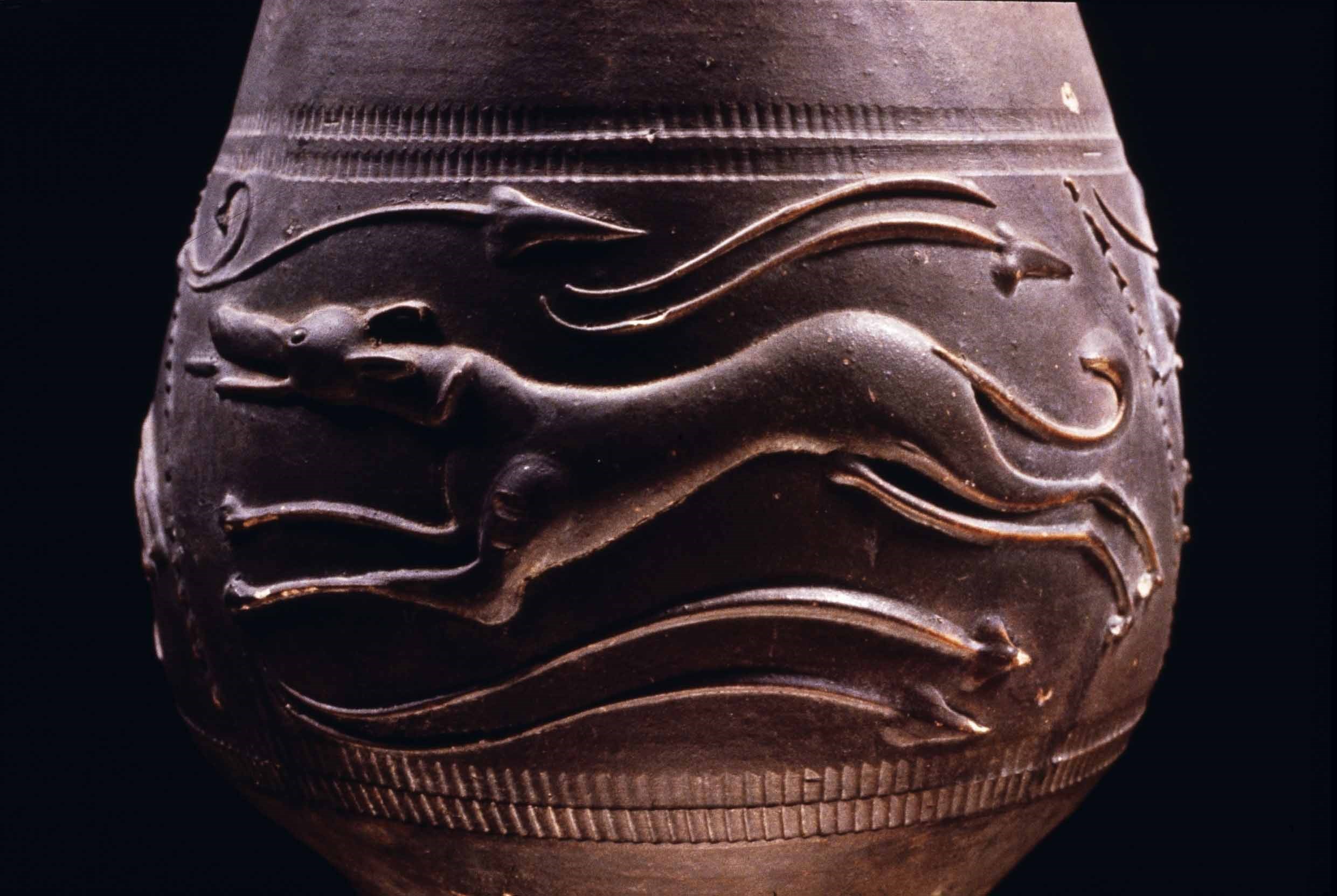 Corbridge had a dual nature, with soldiers and civilians living alongside each other. The increasing presence of non-military personnel is represented by small finds, but also by the poignant tombstones of children. This example shows Vellibia playing with her favourite ball, having 'lived most happily four years and 64 days'. 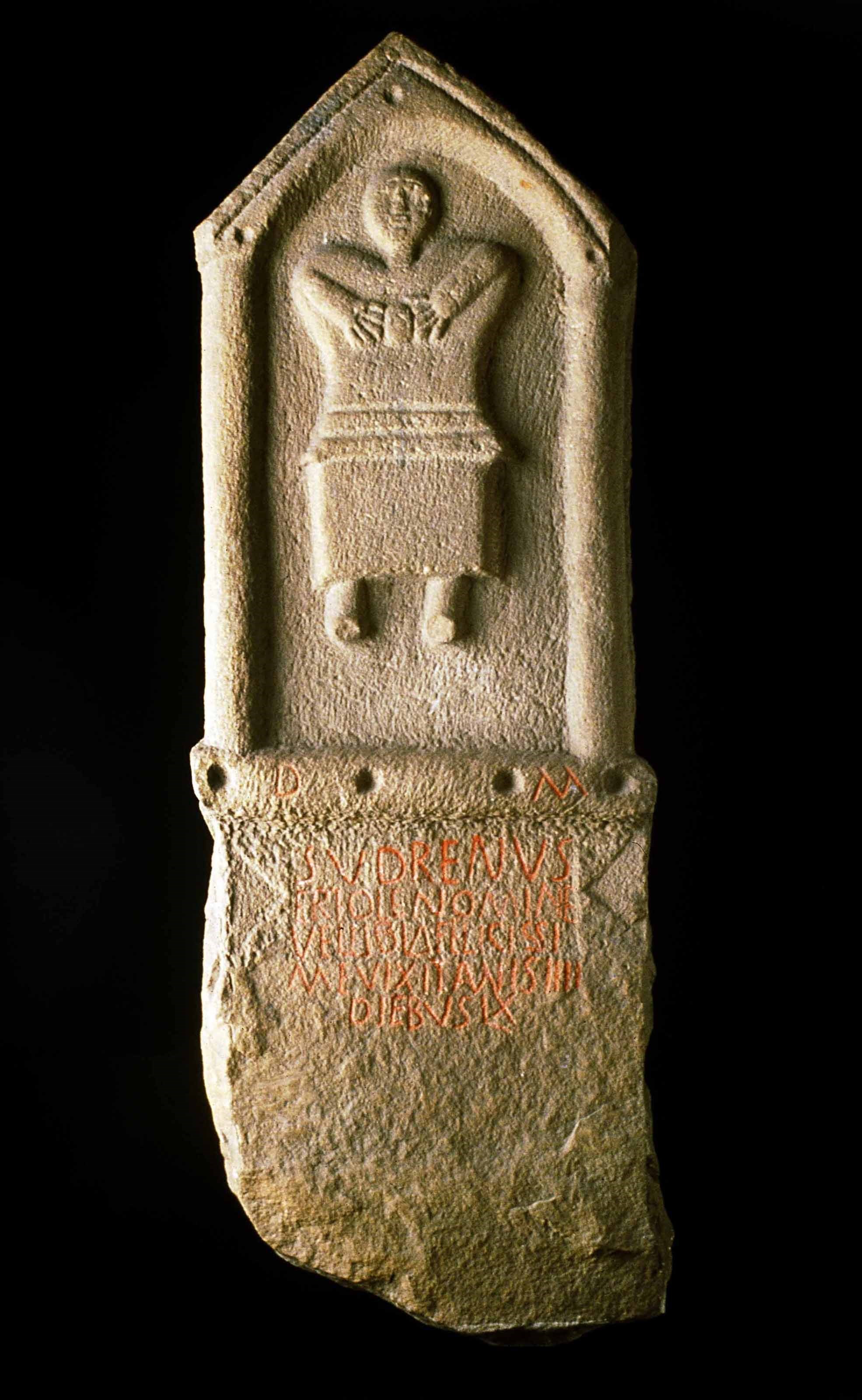 This chest of Roman armour, weapons and personal items is an amazing time capsule offering an insight into life at Corbridge. The most famous part of the hoard is the armour, of a type called 'lorica segmentata', which allowed archaeologists to reconstruct a suit for the first time. The iron from the armour and weapons has allowed organics such as leather and rope to survive as mineralised traces, a rarity from this site. 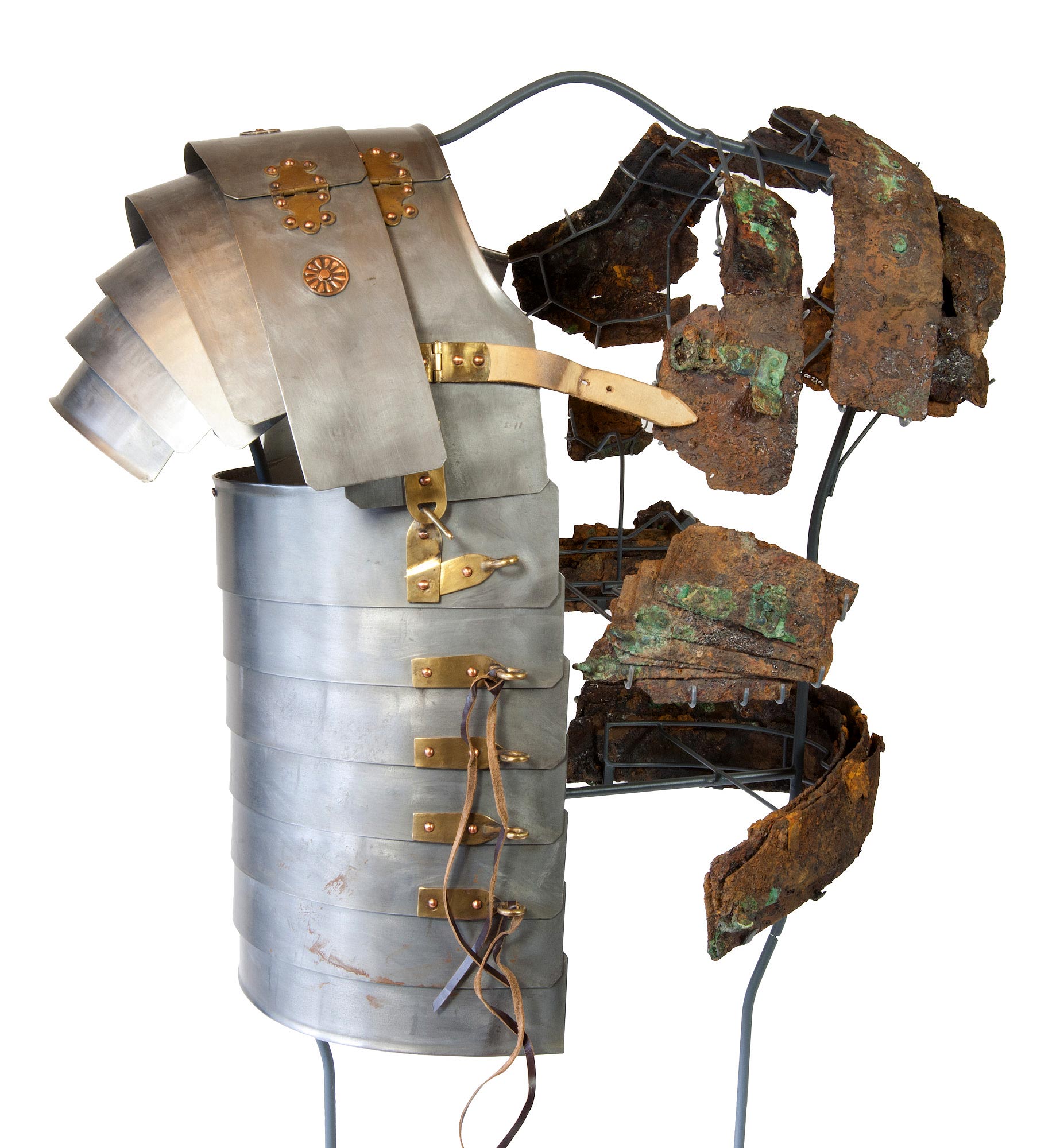 Relief of the Sun God Sol

Relief of the Sun God Sol

Sol, the god of the sun, was worshipped all over the Empire, and he can be seen on coins as well as sculpture. This particular relief is unusual in its style: Sol is shown with large lips, a square nose and wide eyes, not at all normal for a Classical deity. The sculptor of this piece has mixed Celtic styles with a Classical subject. 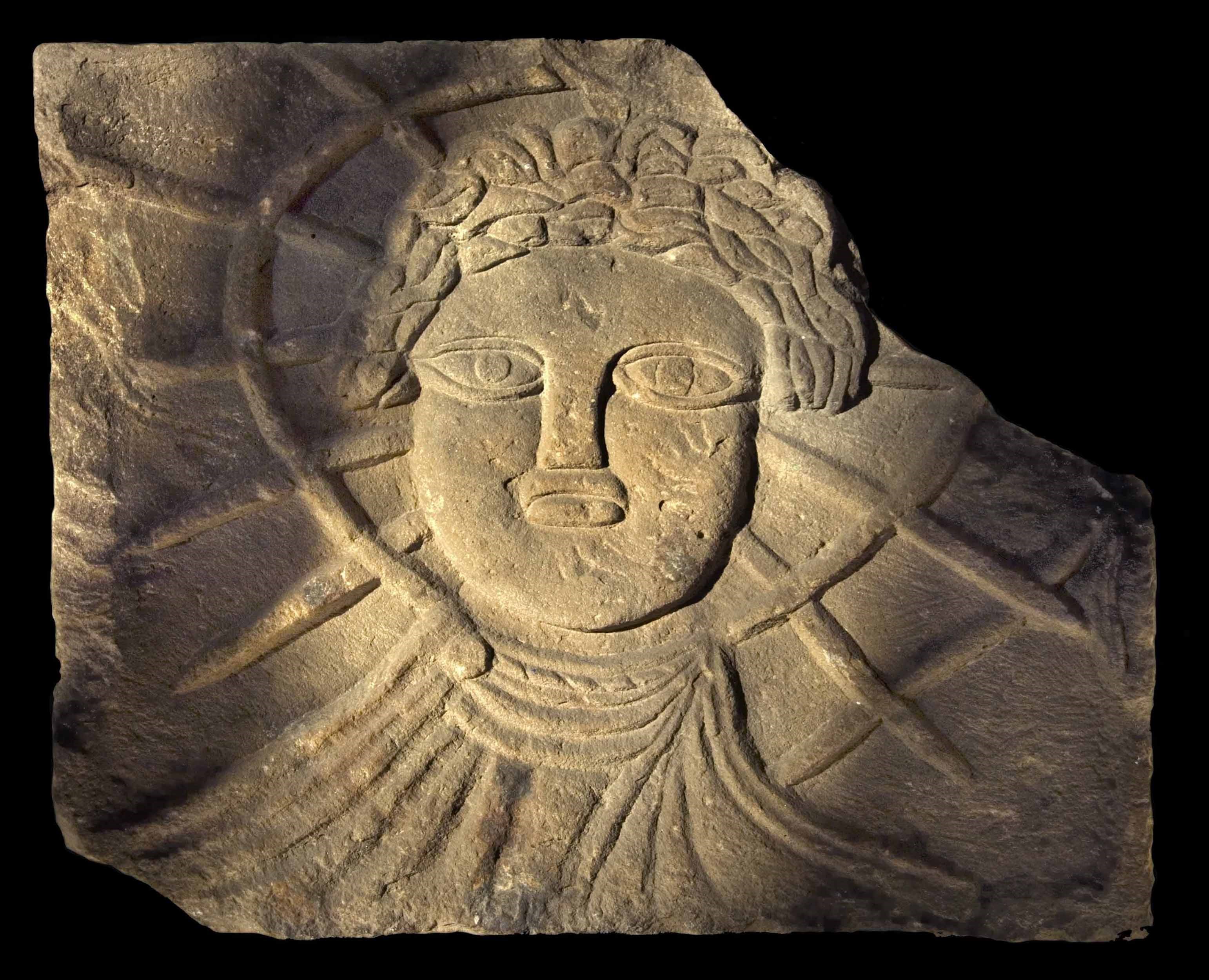 Gaming Board with Counters, Die and Shaker

Gaming Board with Counters, Die and Shaker

Leisure time for the soldiers and civilians at Corbridge is represented by this gaming board, along with the equipment needed to play the various board games known in the Roman period. We find evidence of gambling all along Hadrian's Wall - soldiers clearly had cash and time but limited options for spending their winnings. Many counters are made from broken pots, with some of glass and bone. 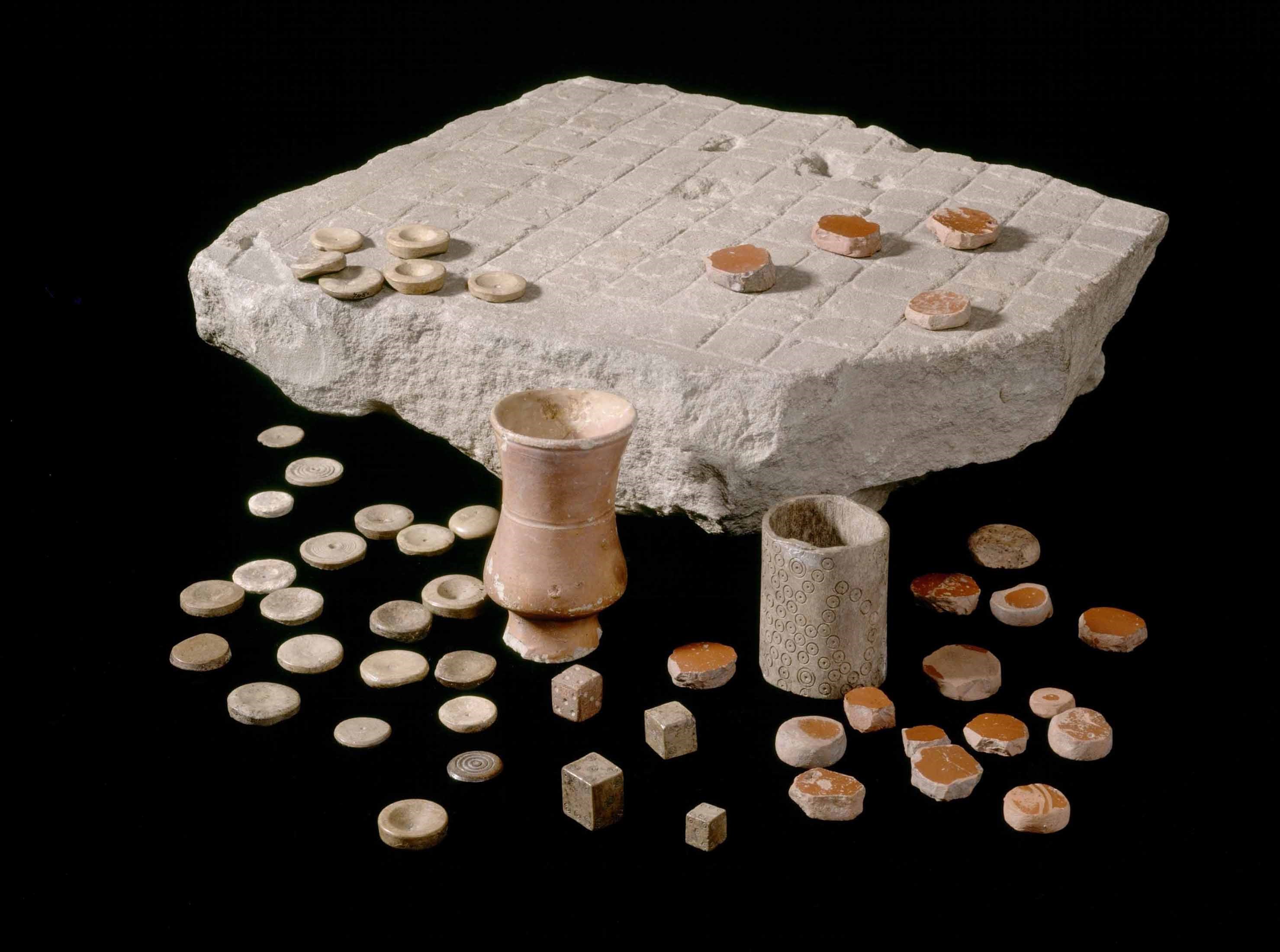 Everyday items were often decorated with religious or symbolic images in the Roman period. This pottery fragment shows the figure of a warrior god with an axe in his raised hand. He is wearing a conical hat, probably a Syrian type. He has been identified as Jupiter Dolichenus, the Syrian god of sky and weather, because altars to him have also been found at Corbridge. 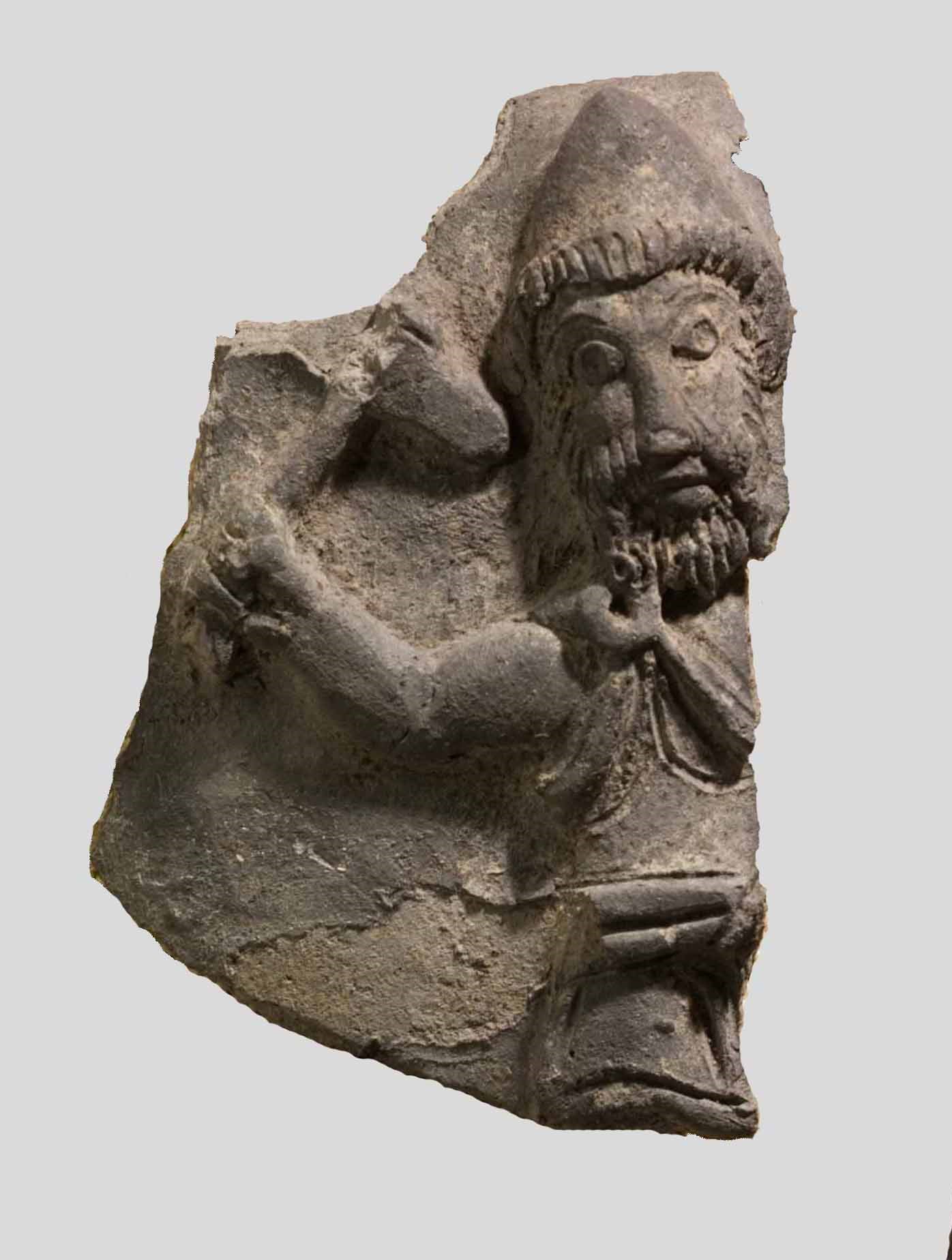 This is just one example of the amazing skill of the Roman glassworkers at Corbridge. The Romans learnt to make glass from the Egyptians and glassware spread across Europe through them. The ornate detail on the handle of this flask and the delicacy of the design would not be out of place in a modern gallery. It is remarkable, given the thinness of the vessel, that it has survived so well after about 1,700 years in the ground. 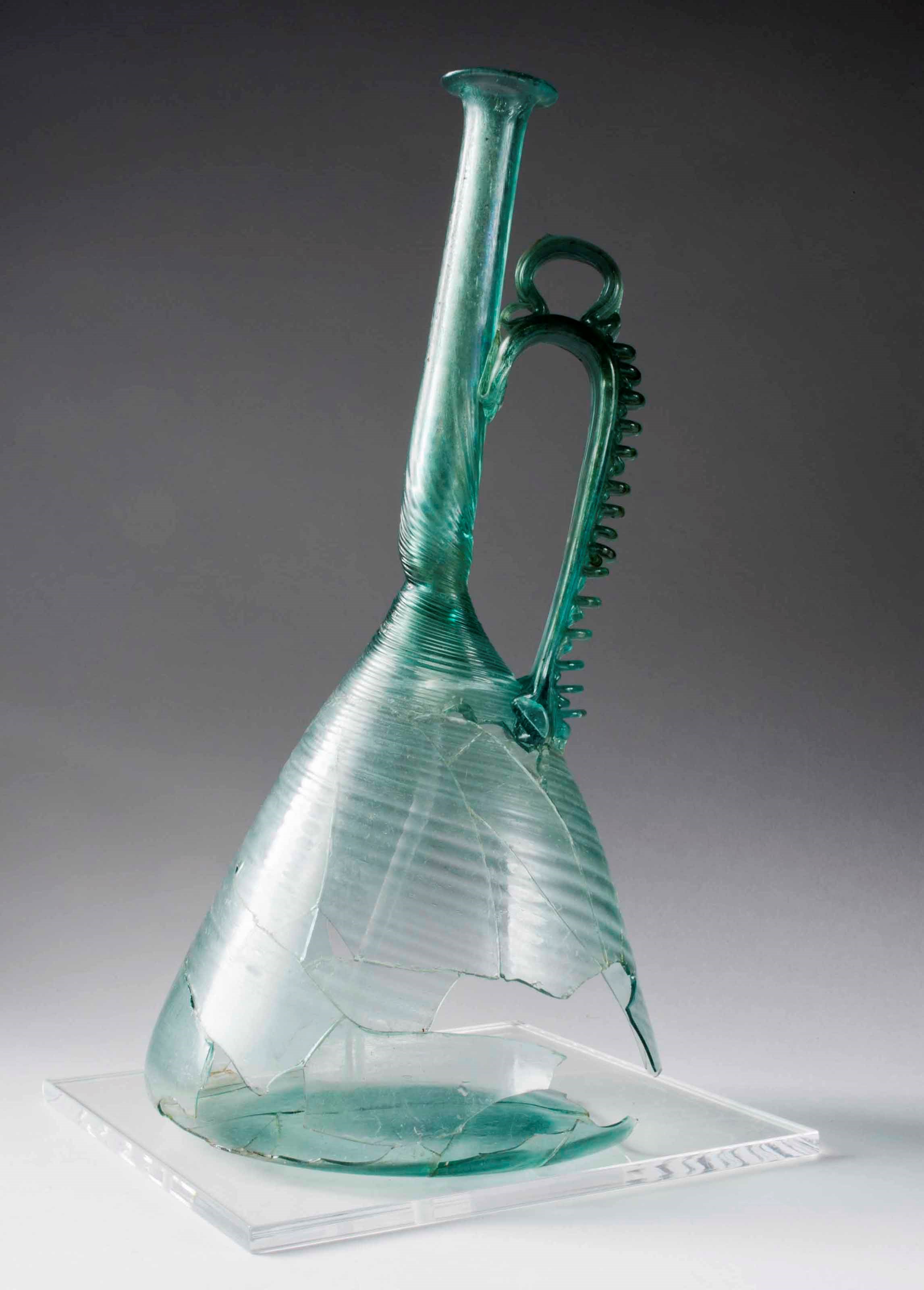 Pins have been found in large numbers at Corbridge and would have been used to hold clothing and hair. Bone pins were cheaper than metal ones, but the owner of this pin has spent money adding the gold sheet to the head - the part left on show - thus displaying the wealth of the wearer. 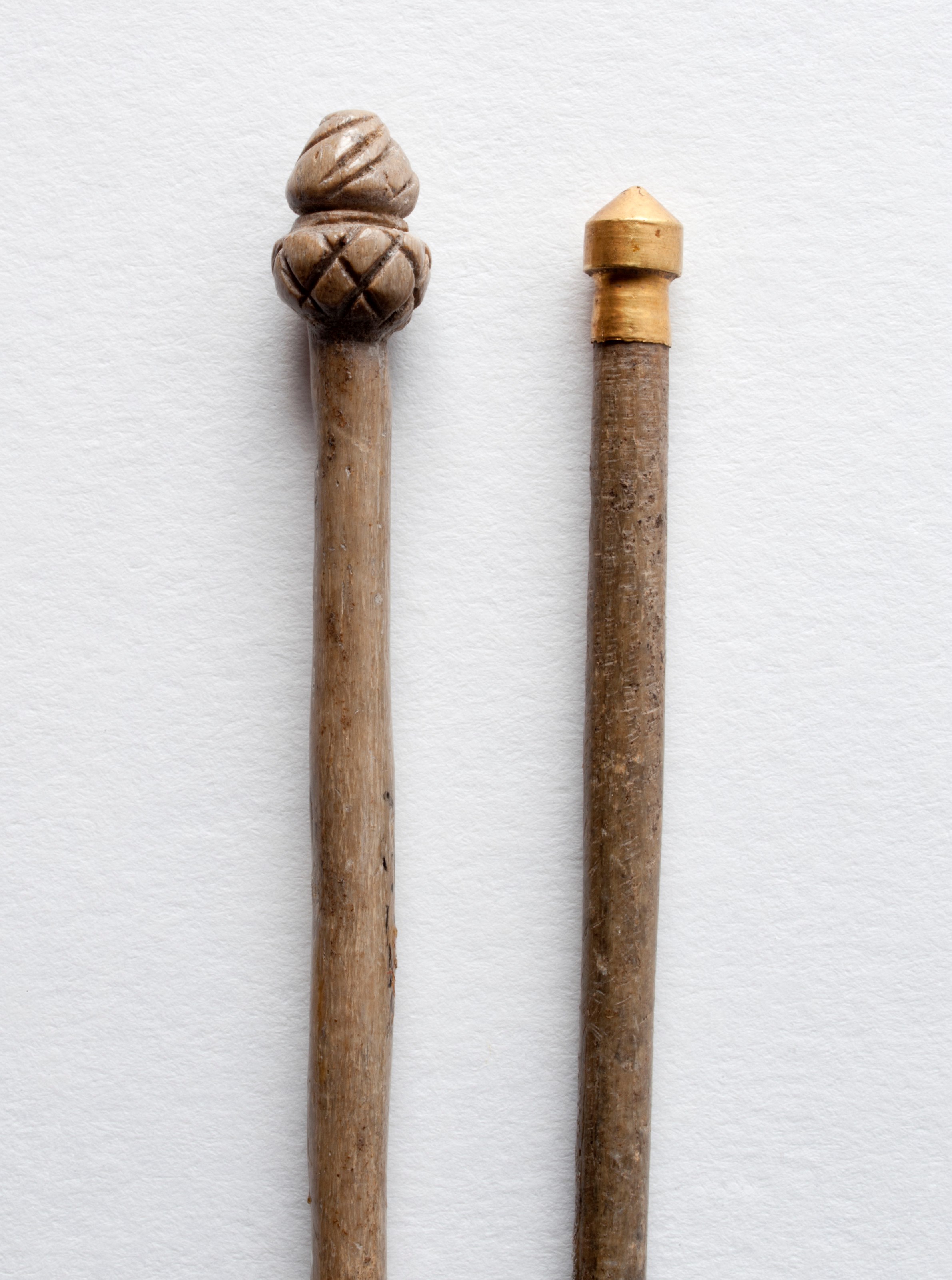