The collection from Gisborough Priory comprises mainly decorative architectural stonework. Primarily dating from the late 12th to 14th centuries, it reflects the major periods of building the priory church, offering exceptional evidence for the adornment of both the Romanesque and later Gothic church.

There is also an important group of Romanesque figurative sculpture – an incredibly rare survival which echoes the priory’s wealth and patronage. Some of these sculptures are comparable to examples from St Mary’s Abbey, York, so similar that they must have derived from the same workshop.

The earliest excavations at Gisborough Priory were instigated by the then owner, Captain (later Admiral) Thomas Chaloner, in 1867, with further excavations following in 1932 when the site was taken into the care of the Office of Works. The collection contains material from both these investigations.

Explore a selection of highlights from the collection below.

This panel depicts a human figure which has been crudely carved in relief. It is likely to originate from the Anglian settlement that occupied the site of the priory before the Norman Conquest. The Augustinian priory was founded in 1119. 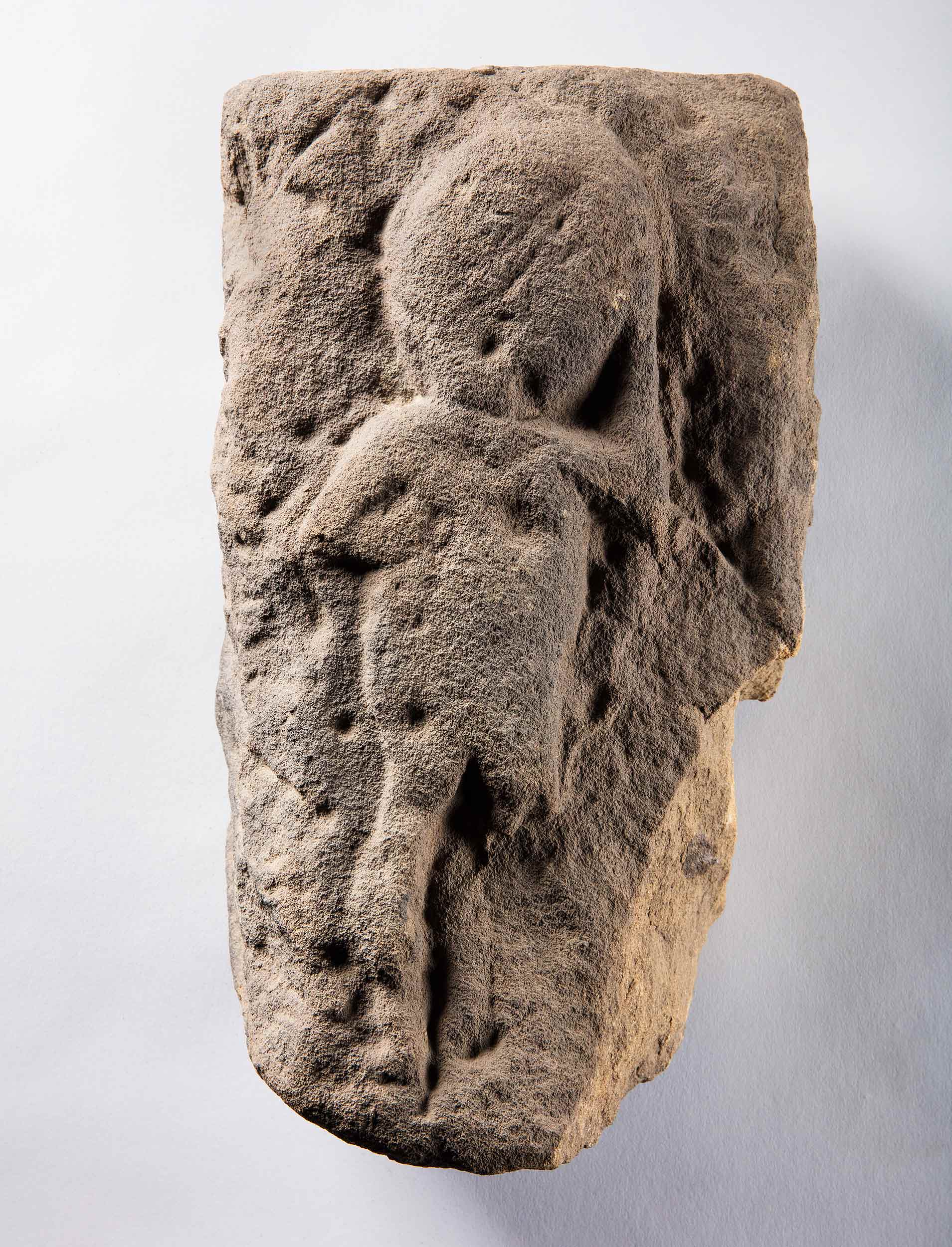 This fragment of a bearded man comes from a life-size Romanesque sculpture. The back of the sculpture has the remains of a column, which suggests it most likely formed part of a doorway in the first priory church. It is very similar to complete examples from St Mary’s Abbey, York, which depict prophets and apostles, and is likely to have been made in the same workshop. 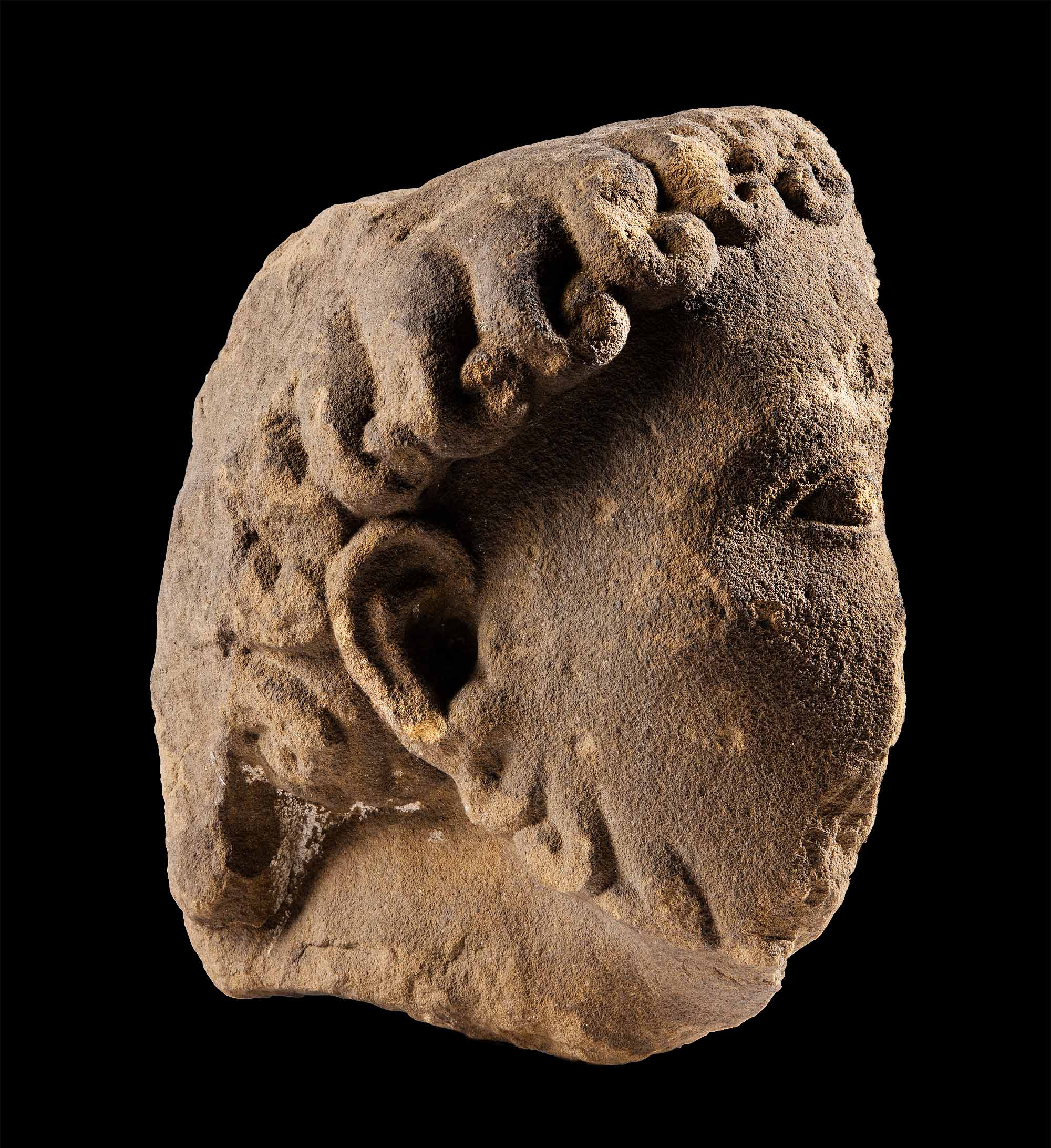 This Romanesque corbel features a zoomorphic (animal-like) grotesque head with an open mouth. It dates to the mid 12th century and was probably one of the corbels supporting the roof timbers of the first priory church. 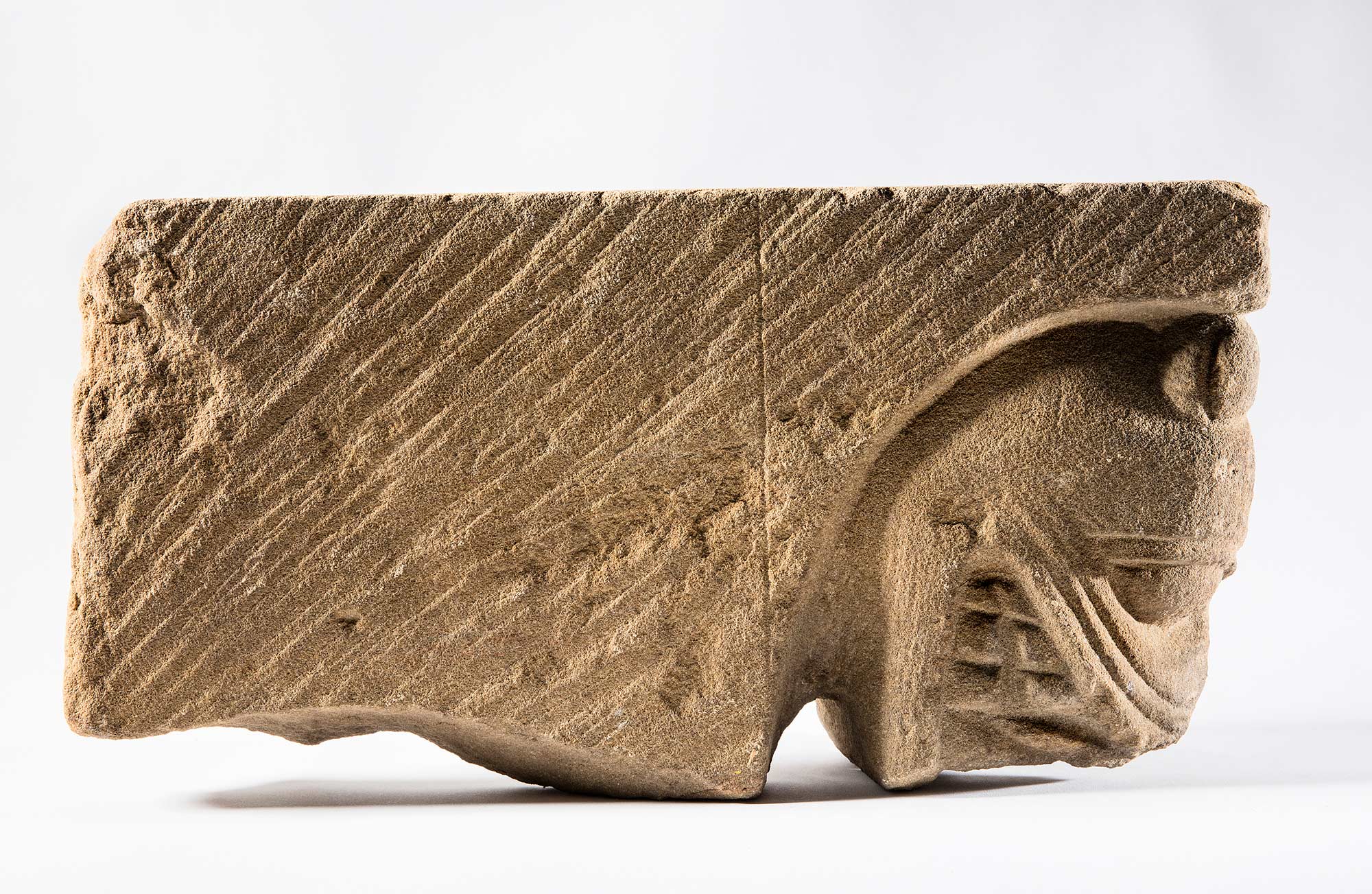 The form of this Romanesque pillar piscina (a basin for washing the sacred vessels used in church services) is extremely rare. Designed to look like a freestanding pillar and capital, it is decorated with scalloped divisions and spiral motifs, and has a drain running down the centre. It would have been positioned next to a chapel altar in the first priory church. 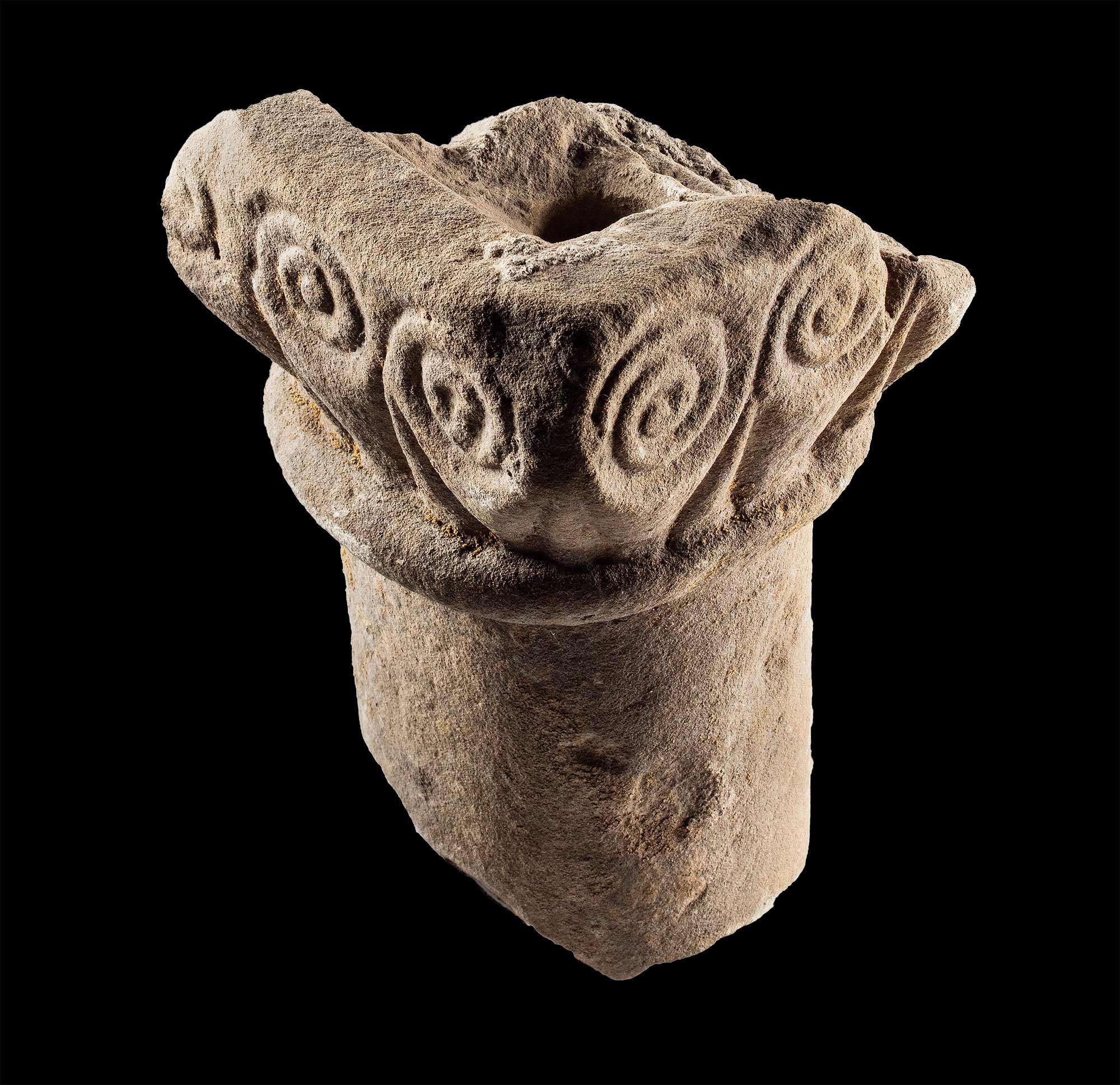 This grave slab is carved with an elaborate bracelet-head (i.e. with overlapping circular ring) cross, with fleur-de-lys terminals. Below the cross-head is a hand-in-blessing (the hand of God) above a chalice. We don’t know whose grave this was, but it must have been a high-status religious individual, as the hand-in-blessing is commonly used to indicated the burial of an archbishop.

The slab bears evidence of fire damage (reddening of the stone), most likely from the fire which destroyed the church in 1289. 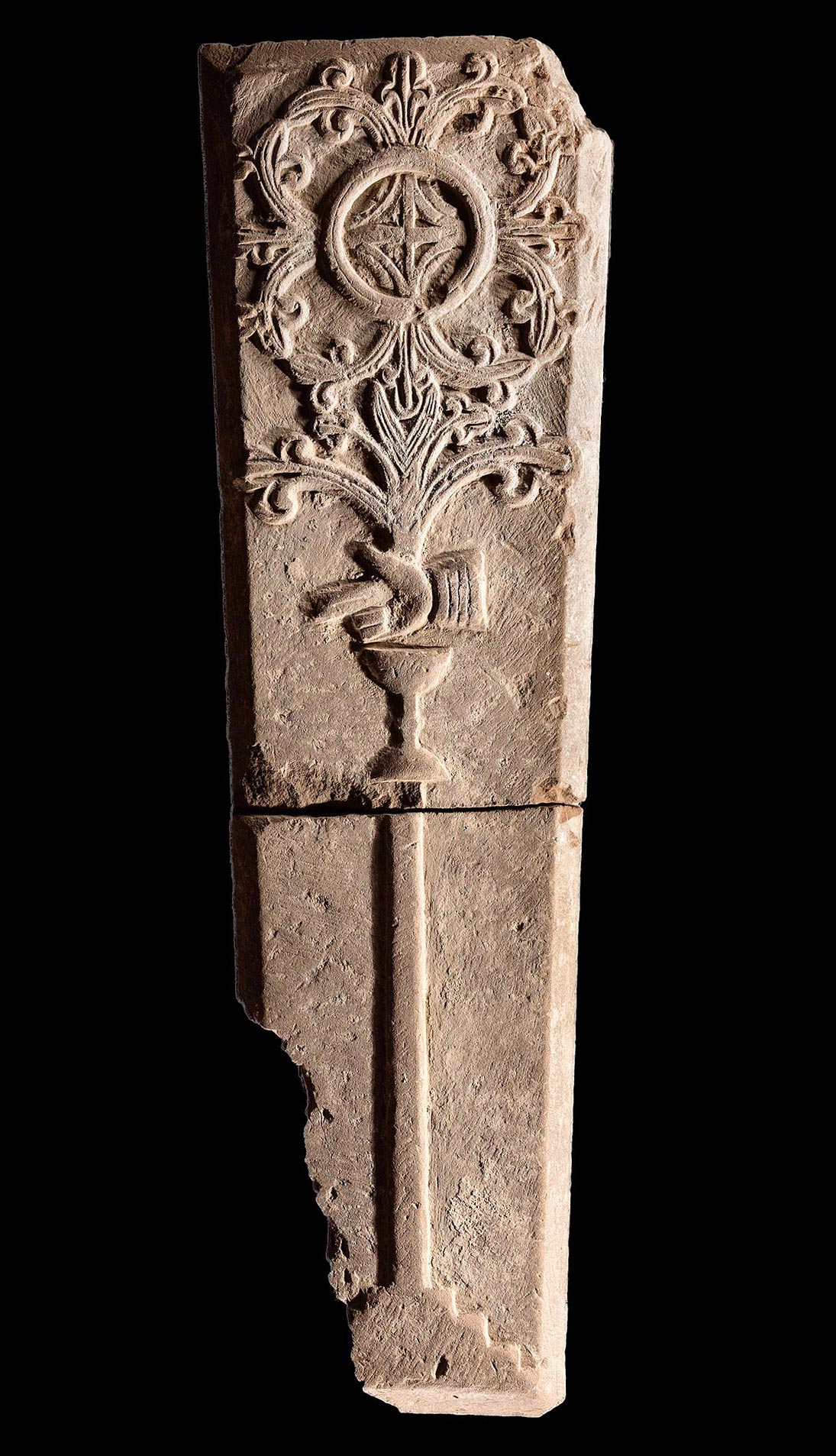 This weathered parapet sculpture depicts a grotesque beast, with a stylised mane and front legs below. Between the legs is another face which appears more human in form. This may have come from the 14th-century parapet of the presbytery (the east end of the church). 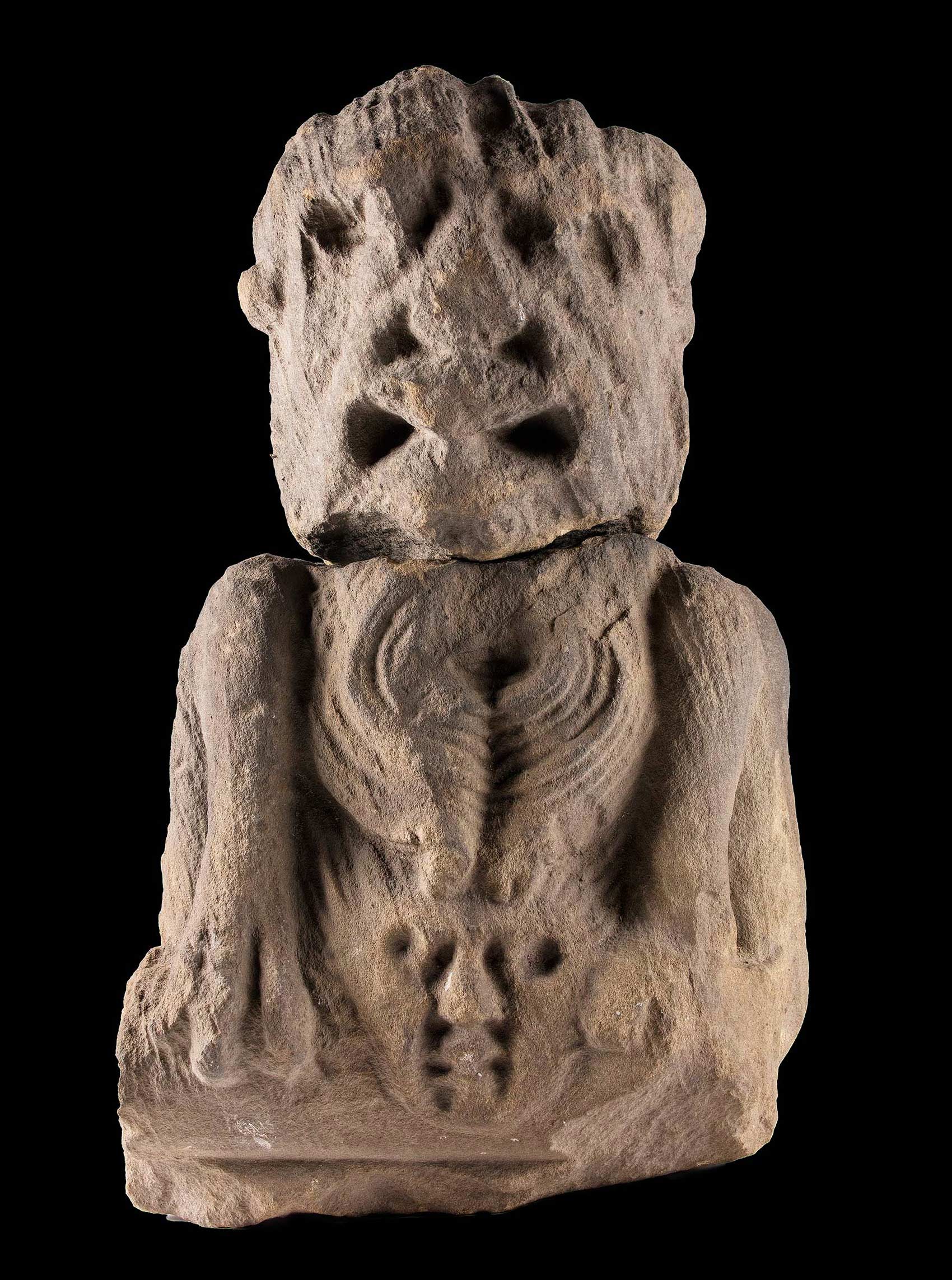 This stone ceiling boss with vine-leaf carving is likely to have come from the 14th-century presbytery (the east end of the church). It depicts the Latimer coat of arms. The Latimer family were patrons of Gisborough. Lord William Latimer (d.1381) was buried near the high altar, probably near where the boss was originally positioned. 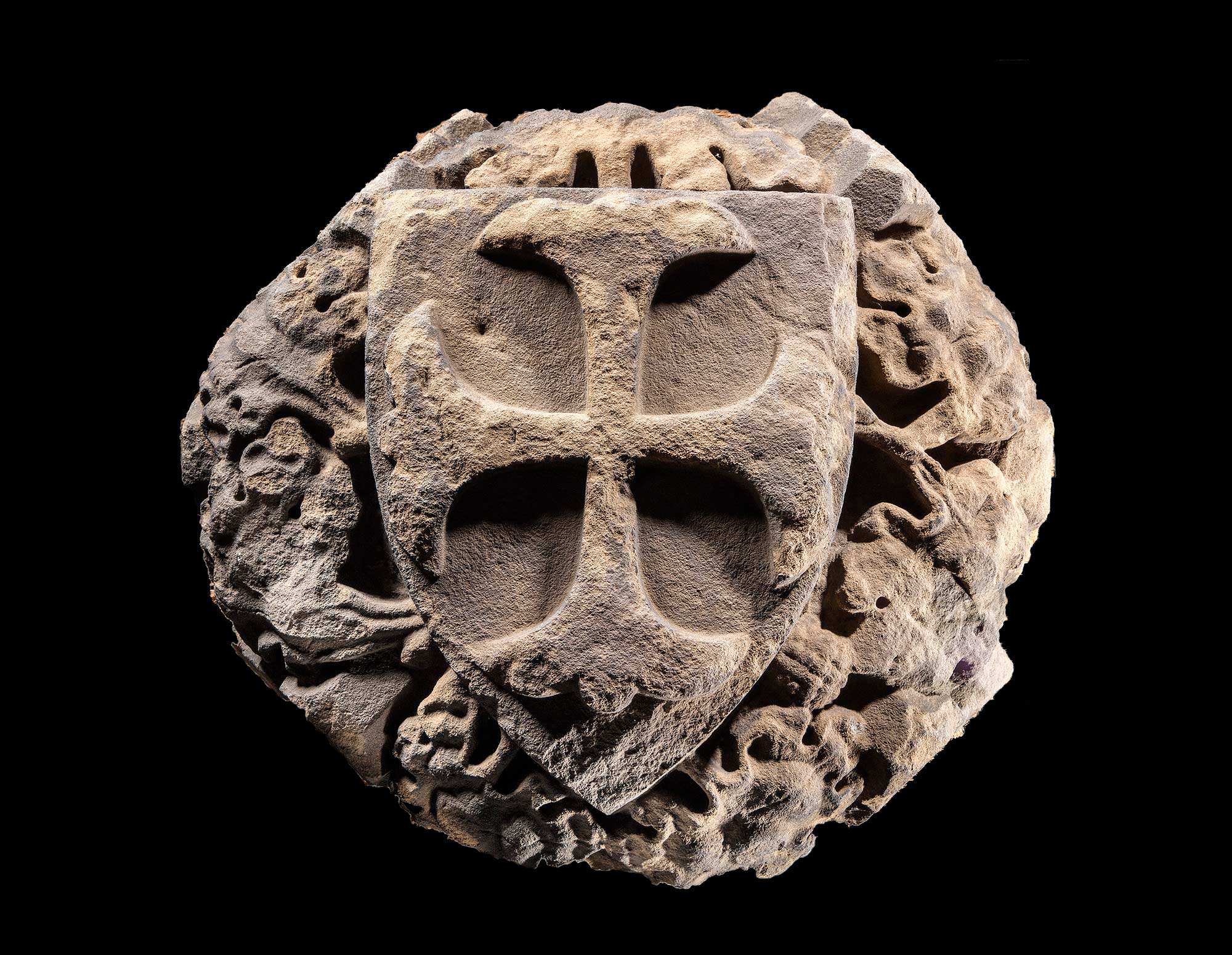 The oversized scale of this fragmentary sculpture, which depicts a hare or rabbit, suggests it was originally positioned high up, possibly on a screen in the church. Hares and rabbits had various symbolic meanings in Christian art, representing lust, fertility and purity.

This life-size statue of a seated figure has evidence of metal fixings which may have held a book across the chest, perhaps suggesting that the statue depicted a saint. It has evidence of axe blows on the right shoulder which presumably date from the Suppression of the Monasteries, and may be associated with the removal of the metal fittings for reuse. 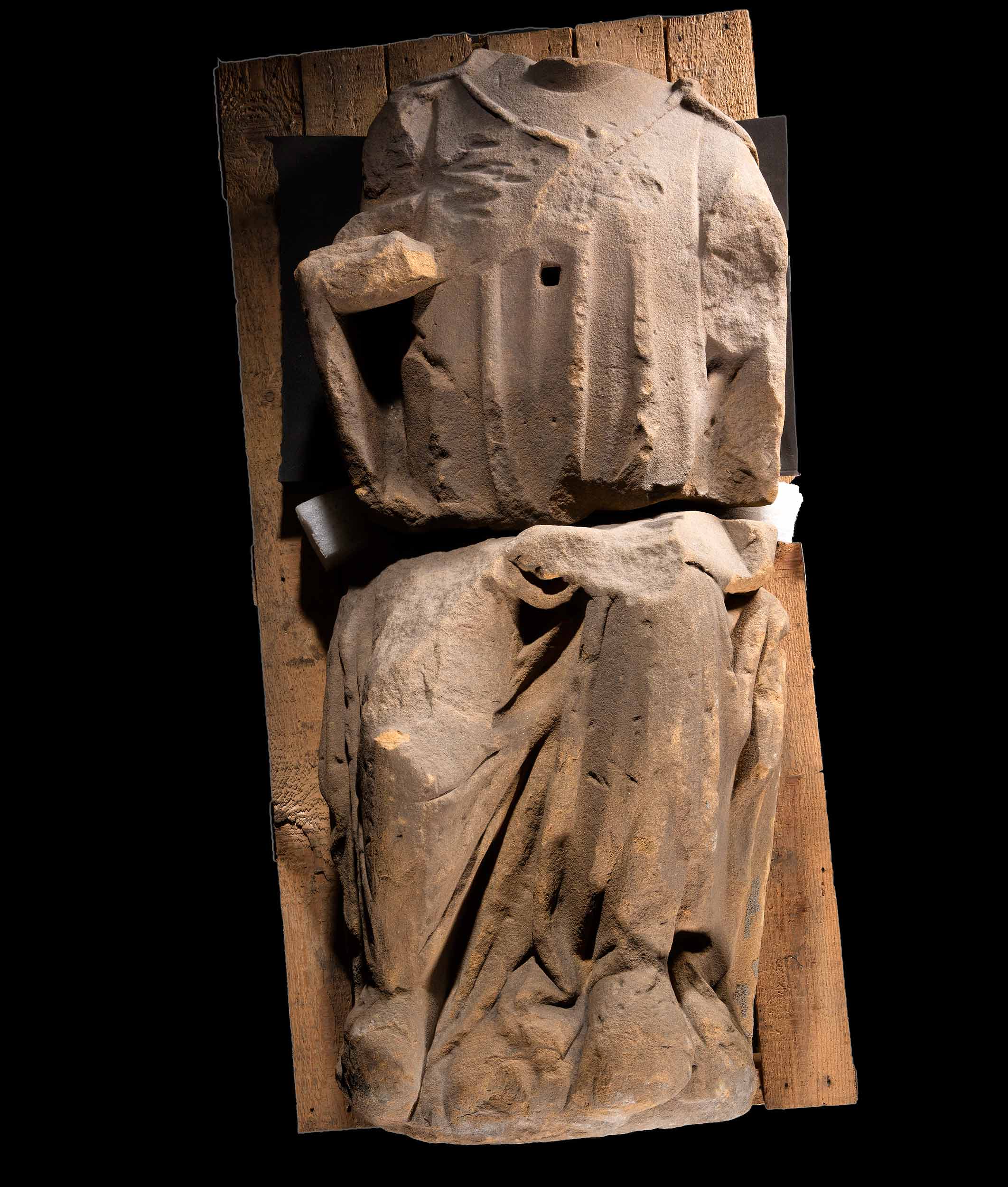 This small fragment of micro-architecture, depicting an arch with zoomorphic label-stop (a decorative terminal) and tracery, formed part of an elaborate stone canopy over a tomb in the church. This was most likely the monument of a significant patron. Tomb micro-architecture reflected styles of contemporary building architecture, and can be dated quite precisely. 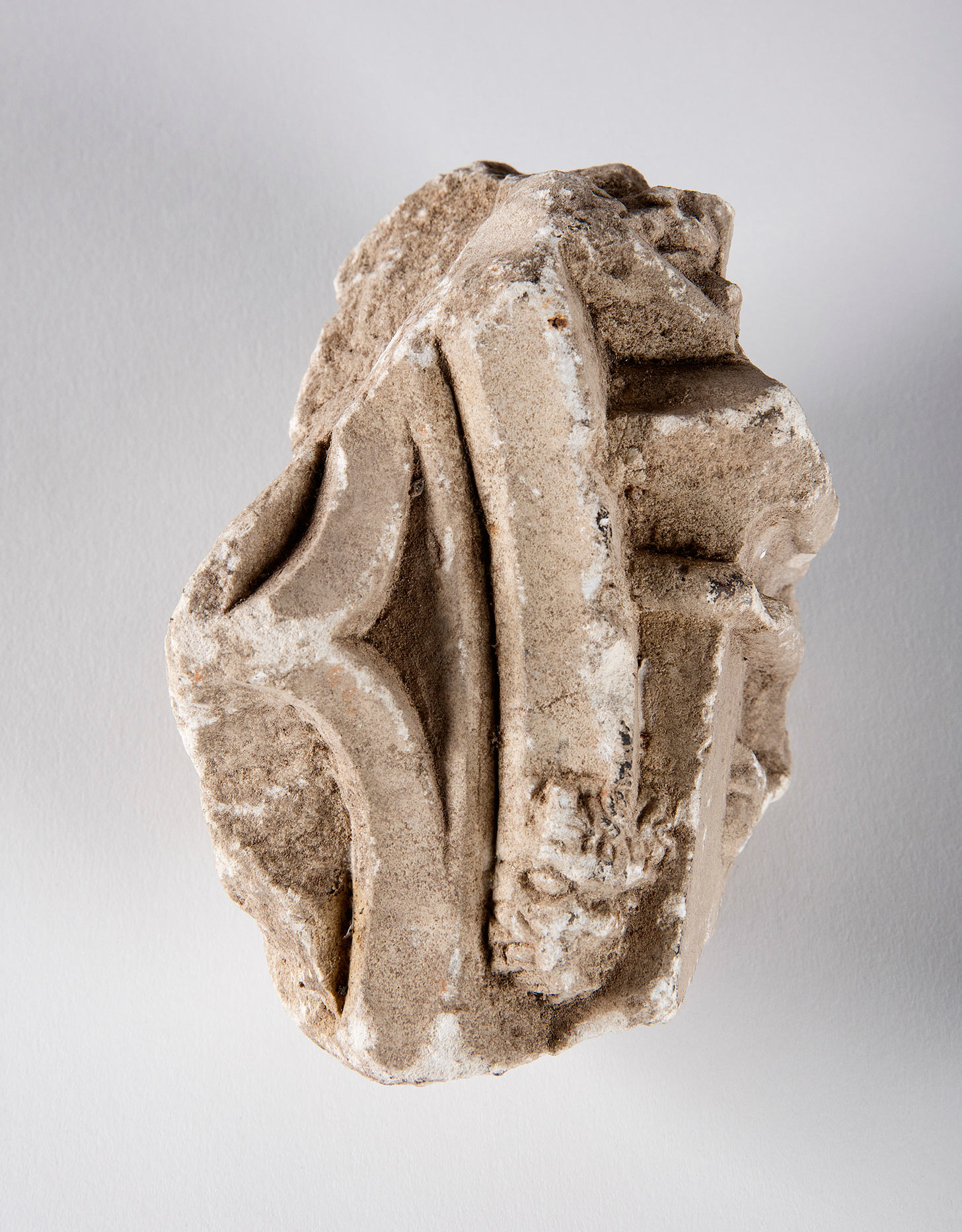