A beloved feature of the local landscape, the distinctive body and sails of Saxtead Green Post Mill have been a Suffolk landmark for generations. The mill is still visible from a distance across the open fields, and one can imagine the sails sent spinning by the wind in this flat and windswept setting, grinding corn since at least the 18th century.

Read on to learn about the long and illustrious history of the mill and find out what gives a post mill its name.

Village mills, like castles or churches, tend to occupy the same site for years, and so it’s possible that the mill we see today is on the same site as the one we see first mentioned in records in 1287. We can’t know for sure how long the current site has been in use, but we do know that a mill was in place here from at least June 1796.

We even know the names of many historic millers and are able to trace the ownership through to the Aldred family, whose ancestor Alfred bought the mill in 1873 and whose relations still inhabit the mill site today.

It’s not surprising that the records show several mills in this area as far back as 1279. We know that the region flourished then with an economy based squarely on the growing of cereal crops, especially wheat. This was a peak time for this production, and Suffolk’s many mills would have been humming with activity.

This original British Pathé footage shows Saxtead Green Post Mill in action in 1948. While the mill no longer produces flour, at the time if was one of the few mills still grinding corn. 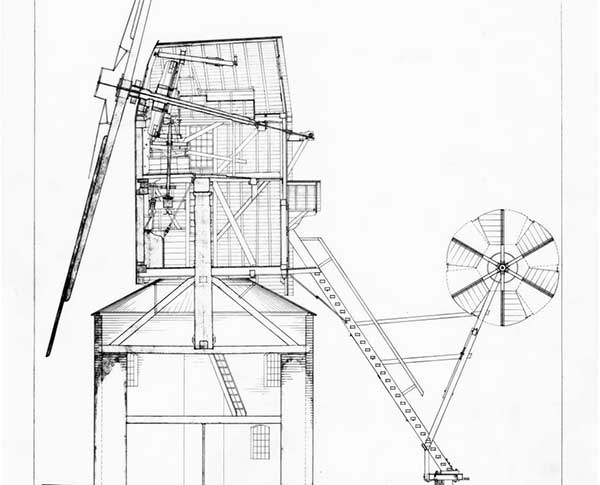 The mill now at Saxtead Green is a post mill, whose whole body (or buck) revolves on its base.

In a post mill, the buck of the mill contains the machinery. Sails are also mounted onto the buck. These sails turn to face the wind and the mill body moves around the single central post (hence the name ‘post’ mill). The buck turns automatically to face the sails square into the ‘eye of the wind’ by the fantail at the rear.

The post mills of east Suffolk are known to be the finest of their type – not only in England but worldwide.

The buck of the mill at Saxtead Green is covered with handsome white-painted weatherboards which extend all the way down to create a ‘petticoat’ covering the two-storey brick roundhouse on which the buck is mounted. The mill is 14m high altogether, of which the roundhouse at the base accounts for half. The mill is considered to be an especially well-proportioned example, which may in part explain its longevity.

The mill has a ladder which stretches from ground level up and into the buck, so that the machinery there can be reached. The fantail is mounted onto this ladder and prettily painted a contrasting blue.

The slatted sail sections are clearly visible in this view

Of course, no mill is complete without sails. The sails on the Saxtead Green mill span 17.7m and are made of wood. Such sails would have originally been wooden frames with sailcloth spread across them, but the wooden structures used now are of a sort developed by the significant millwright and engineer William Cubitt (brother of Thomas Cubitt, also known for his prowess as a builder) in 1805.

These have sections which are divided into seven, with each of the seven ‘bays’ containing hinged shutters like those found on Venetian blinds. These aid the mill in turning to always maximise the wind available – and in turn, maximise the grinding of corn.

An undated image of Saxtead Green Post Mill. It is likely to show the mill in the early or mid-1900s
© R Brinton / Mills Archive

The mill house that can now be seen on the Saxtead Mill site was built for the then miller, Robert Holmes, in 1810. It’s hard to be sure how much of the mill structure and innards that we see today are original – but we do know that local millwrights, Whitmore and Binyon’s, undertook repairs to the mill in the 1850s and 1890s, so it’s likely that many parts were changed then and over time.

Certainly big changes came to milling when more automation was possible. The mill last worked by wind power in 1947, and then ran on an oil engine for a further two years before ceasing commercial milling in 1949.

Jesse Wightman holds a piece of salvaged mill equipment in this image taken at Saxtead Mill. The date is unknown, but Jesse was snapped by mill expert Rex Wailes and we know it to be post-1958
© Rex Wailes / Mills Archive

A mill in retirement

The mill produced flour until the Second World War when, like so many other country mills, it was forced to go over to grinding for animal feed. This was to mark the end of its working life.

The mill was passed to the guardianship of one of English Heritage’s predecessors, the Ministry of Works, in 1951 by an S C Sullivan, the son-in-law of the late A S Aldred and relative of Alfred Aldred, who had bought the mill in 1873.

The Ministry of Works worked with Jesse Wightman, a skilful local millwright who had long worked at and been connected to the mill, to carry out renovations of the structure during the three years leading up to 1960. Jesse’s craftsmanship was famed and he’s still remembered today at the site, with a bench in his honour in place in the mill yard.