Hild is a significant figure in the history of English Christianity. As the abbess of Whitby – a monastery for both men and women – she led one of the most important religious centres in the Anglo-Saxon world. 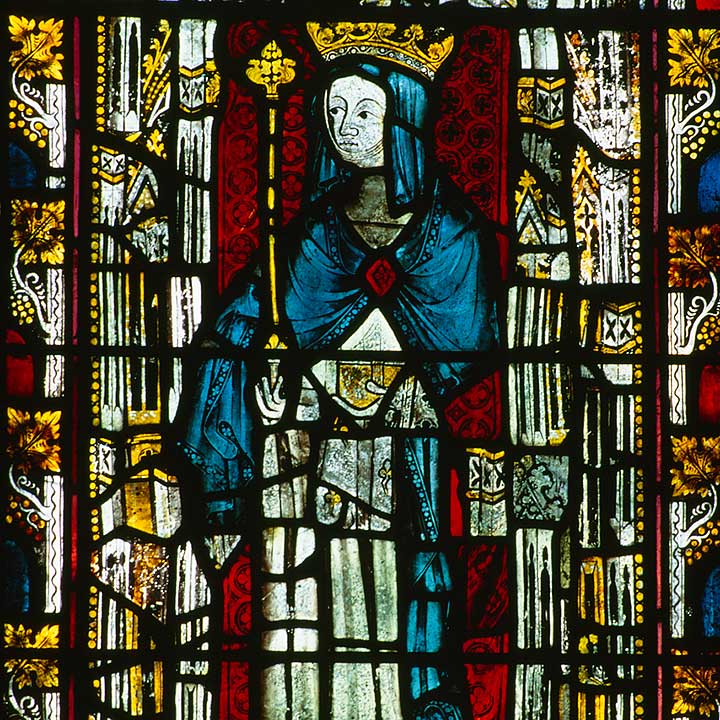 A scribe, thought to be Bede, the 8th-century historian who recorded the events of Hild’s life
© British Library Board (Yates Thompson MS 26 fol 2)

A Dream of Brilliance

Hild’s life is recalled with wonder by Bede, the 8th-century historian of Christian England. An early sign of her brilliance, he says, came in the form of a dream. Bede describes how during Hild’s infancy her mother dreamt of a ‘most precious necklace’ glowing under her garment. ‘It seemed to shine forth with such a blaze of light that it filled all Britain with the glory of its brilliance.’ The necklace, Bede writes, represented Hild, because her life ‘was an example of the works of light’.

Most of what we know about Hild, or Hilda as she is also known, comes from Bede. His account may be a sentimental one, but it demonstrates Hild’s status as one of the most revered abbesses in Anglo-Saxon England.

Hild was converted to Christianity at a time of immense political and religious change. Following the collapse of Roman rule in Britain in the fifth century and the arrival of the Angles and Saxons, the country fragmented into small warring kingdoms. Hild was born into one of the most powerful kingdoms, Northumbria, which covered an area roughly equivalent to modern-day Northumberland and Yorkshire. She was the great-niece of the Northumbrian king, Edwin, and she and her sister Hereswith were raised in his court after their father was murdered.

At this time Christianity was spreading across the country. Missions arrived from two different traditions: the Celtic Christians in Ireland and the Roman Christians in Italy. Hild was baptised into the Christian faith along with King Edwin in about 627. They were converted by Paulinus, who was part of the Roman mission led by St Augustine, but Hild became more influenced by the teachings of the Irish monk Aidan, the Bishop of Lindisfarne.

A 13th-century seal showing Abbess Hild holding her crozier, with monks on either side celebrating the Mass
© British Library Board

According to Bede, Hild lived a secular life until the age of 33, when she became a nun. She first travelled to East Anglia, intending to join her sister in a monastery in France, but returned to Northumbria at the request of Bishop Aidan. Soon afterwards she became the abbess of Hartlepool and in about 657 she founded the monastery at Whitby, then known as Streanaeshalch. Nothing of the original monastery can now be seen, but a Benedictine abbey was founded on the same site in the late 11th century. It is the ruins of that monastery which stand proud on Whitby’s headland today.

In Hild’s time the abbey was a double monastery, home to both monks and nuns. Double monasteries led by abbesses were common in the fifth to seventh centuries. At some, such as at Wimborne in Dorset, there was a strict separation between men and women, but there is no evidence for this at Whitby. Hild, for instance, seems to have had regular contact with visiting clerics and the religious elite.

Bede praises Hild for implementing a monastic regime that required strict observance of ‘justice piety, chastity’ and ‘particularly of peace and charity’. In her monastery, ‘no one there was rich, and none poor, for they had all things common’.

Under Hild’s tutelage and guidance, several members of Whitby’s monastic community became important and powerful clerical figures. Five of her monks became bishops – Bosa, Aetla, Oftfor, John of Beverley, and Wilfrid – and one of the monastery’s lay brothers discovered he had a special gift for poetic verse. Hild pronounced his gift divine and he subsequently became the first English poet whose name we know: Caedmon. Hild and her monastic rule became so respected, Bede says, that even kings and princes sought her advice.

She certainly played a role in the politics of her time, notably during the Synod of Whitby, which took place in 664 while she was abbess. The meeting was called to resolve the date of Easter, which was celebrated at different times by the Celtic and Roman Christians. Hild appears to have taken the side of the Celts, but Oswiu, the Northumbrian king, ruled in favour of the Roman tradition, signalling a landmark in the history of English Christianity.

Read more about the Synod of Whitby
The ruins of the Benedictine abbey at Whitby, seen from across the harbour

Hild was seriously ill for the last six years of her life and died in 680 at the age of 66. She was buried at Whitby, though her remains were later moved to Glastonbury. She was succeeded as abbess by King Oswiu’s daughter Aefflaed, who ruled jointly with her widowed mother, Eanflaed.

Bede records that Hild’s death was accompanied by visions. At Hackness – another monastery she founded – a nun was reported to have seen the roof of the dormitory open to reveal Hild’s soul ascending to heaven accompanied by angels. When the monks arrived from Whitby with the news of Hild’s death, the nuns were already singing psalms and praying for her soul.

There was no official canonisation of saints at this time but these recollections of wonders and visions, recorded by Bede in 731, suggest that Hild’s cult started early. She became the patron saint of 14 medieval churches and her name was later given to St Hilda’s College, Oxford, founded in 1893.

Ammonite fossils may have inspired the legend of snakestones. This one has been carved with a snake's head

St Hild’s fame was secured locally with the snakestones legend, which dates back to the Middle Ages. The legend holds that Whitby and the surrounding area was plagued by snakes. Locals sought the help of St Hild, and she in turn prayed to God. First she prayed to remove the snakes’ heads, and then she prayed to turn their bodies to stone. In one account of the legend St Hild invokes the Gospel of St Mark (23:11) and utters Christ’s words, ‘Be removed and cast into the sea.’

Headless snakes can still be found today on Whitby’s shoreline. But we now know that these enigmatic objects are in fact ammonite fossils. The fossils date from the Jurassic Period (200–145 million years ago) and enterprising Victorians used to carve snakes’ heads into them to sell to tourists. English Heritage had its own snakestone carved by a local artist in 2018.

View the snakestone in 3D