The access to education and employment which women are entitled to today is the result of the individual achievements and tireless campaigning of countless women throughout history. In the UK, it was often in London where women took the historic first steps into roles previously closed to them. We look below at just some of London’s pioneering women who are commemorated by blue plaques. 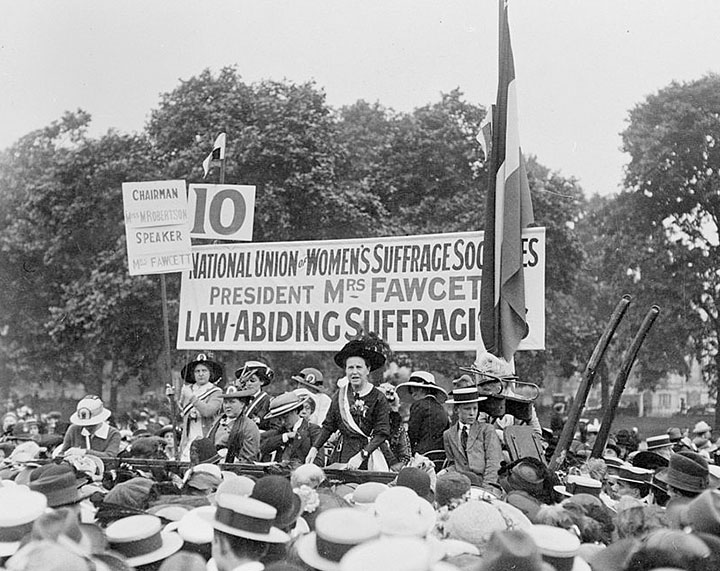 The women who were commemorated in the early years of the blue plaque scheme (begun in 1866) were largely writers and stage performers – reflecting the fact that these were essentially the only celebrated occupations open to women at the time. Nonetheless, the achievements of these figures were immense. Fanny Burney (1752–1840), whose plaque is the oldest surviving to a woman, was described by Virginia Woolf as the mother of English fiction, while playwright Joanne Baillie (1762–1851) – the fourth woman to receive a plaque, in 1900 – was considered second only to Shakespeare during her day.

By the mid-19th century, however, women were rallying to secure more opportunities for themselves and to expand their working lives into the arenas of politics, medicine and science.

At the forefront of this movement was the Langham Place group (active 1857–66), a circle of friends whose periodical, the English Woman’s Journal, took female employment as its major theme. They formed the Society for Promoting the Employment of Women in 1859, held classes in arithmetic and bookkeeping and in 1862 formed a committee to support fellow-member Elizabeth Garrett Anderson (1836–1917) in her application to study medicine at London University.

Anderson applied to numerous universities, and was rejected by all of them except Middlesex Hospital in London, where she studied briefly before being excluded. Finally, threatened with legal action, the Society of Apothecaries allowed her to take their examinations, and in 1865 Anderson became the first woman in Britain to qualify as a doctor. Her perseverance paved the way for the acceptance of women in the practice of medicine.

Around the same time as Anderson was applying to study medicine, her good friend Emily Davies (1830–1921) was campaigning alongside Frances Mary Buss (1827–94) and Barbara Leigh Bodichon (1827–91) to open up university courses and professional careers to women. In 1869, Davies and Bodichon founded Girton College – the first residential college to offer degree-level education to women. Anderson’s younger sister, Millicent Garrett Fawcett (1847–1929) followed their achievement by co-founding Newnham Hall (later College), also in Cambridge, in 1875. Unfortunately, Bodichon’s only London residence was demolished to make way for Marylebone Railway Station, so she has no official blue plaque in the capital.

One of the early students at Girton College was the physicist Hertha Ayrton (1854–1923), who read mathematics there from 1877 to 1891. Her ‘Ayrton fan’ was later used by British troops to expel poisonous gases from the trenches during the First World War and in 1902 she was the first woman to be proposed for membership of the Royal Society. She was rejected on the grounds that, as a married woman, she had no standing in law.

Almost 40 years later, Rosalind Franklin (1920–58) studied natural sciences at Newnham College. Franklin went on to perform vital X-ray work on DNA molecules – research that proved crucial to Crick and Watson’s discovery of the structure of DNA, for which they won the Nobel Prize in 1962. Franklin had died at the age of 37 four years earlier, and proper recognition for her considerable role in identifying DNA molecules as the building blocks of life has only come in more recent years.

The slow acceptance of women in science in the 20th century makes the achievements of Ada, Countess of Lovelace (1815–52) even more remarkable. The daughter of Lord and Lady Byron (whose marriage disintegrated shortly after her birth) was privately educated in maths and science on the wishes of her mother, who – so it’s said – didn’t want her to become a poet like her father. ‘I do not believe,’ Ada wrote to Charles Babbage, ‘that my father was … such a Poet as I shall be an Analyst; (& Metaphysician)’. She was vindicated when, in light of the extended notes she wrote for Babbage, she was described as one of the first computer programmers.

While paving the way for Ayrton, Franklin and other women to enter higher education, the Langham Place group were also fighting to give women a foothold in politics. Davies, Bodichon and Anderson helped organise the petition for women’s suffrage presented to Parliament by John Stuart Mill (1806–73) in 1866, while Millicent Fawcett went on to lead the constitutional campaign. Her peaceful, pragmatic tactics were offset by the militancy of the suffragettes, led by Emmeline (1858–1928) and Christabel (1880–1958) Pankhurst and Sylvia Pankhurst (1882–1960).

All were rewarded when women were granted equal voting rights with men in 1928, 10 years after they were first given limited voting rights. That first 1918 bill was followed in the same year by the lesser-known Parliament (Qualification of Women) Act, which allowed women to sit in Parliament for the first time.

The first to do so was the rather unlikely Nancy Astor (1879–1964), an American society hostess who in 1919 was promoted as a stop-gap candidate for her husband’s former seat, Plymouth Sutton – he having inherited a peerage. She won, and held the seat for the Conservatives for over 25 years. Despite having no prior links to the suffrage campaign, she fought for women’s rights throughout her time in Parliament (though she opposed equal rights for divorce and birth control measures).

Astor was also a champion of child welfare and supported the Family Allowances Bill of 1945, which was largely instigated by Eleanor Rathbone (1872–1946). Rathbone was elected to Parliament in 1929 and became one of the most notable social reformers of her times. ‘It is very difficult, when we look at [Rathbone]’, Astor said approvingly of her fellow MP, ‘to think of her as a revolutionary, but she is’.

The extent to which the actions of women during wartime directly influenced female emancipation is much debated, but the world wars certainly highlighted the variety of roles women could hold in society.

The bravery and achievements of the nurses who served abroad during the First World War gained much public attention, particularly in relation to Edith Cavell (1865–1915) and Dame Maud McCarthy (1858–1949), but it was during the Second World War that women took on increasingly diverse roles – both at home and at the frontlines.

Secret agent Violette Szabo (1921–45), for instance, became the first woman to be awarded the George Cross following her (ultimately fatal) missions into occupied France, while Amy Johnson (1903–41) lost her life while serving in the Air Transport Auxiliary, having previously become the first woman to fly solo from England to Australia.

Like Szabo, Lee Miller (1907–77) also ventured into enemy territory, but as a photographer rather than a spy. In August 1944, she was the only photojournalist present at the siege of St Malo in north-west France, and later went on to document the appalling discoveries at four concentration camps, most notably at Buchenwald and Dachau.

Although many pioneering women have been commemorated under London’s blue plaque scheme, there are many more who deserve to have their place in history recognised. The scheme relies on public suggestions and we welcome proposals for consideration by the English Heritage team. For more information on the criteria and procedure for nominations, please see our guidance on proposing a plaque.