English Heritage looks after nine important monuments in London, erected in the 19th and 20th centuries. Some were intended to commemorate victory, such as the triumphal Marble Arch and Wellington Arch, which were envisaged as memorials to Britain’s victories against Napoleon. Others served to remember those who had lost their lives in war – the most significant of those being the Cenotaph in Whitehall which has been the focus of national remembrance for a century.

Browse all the London monuments in our care in the gallery below.

This memorial was created in thanks to the British people for receiving Belgian refugees during the First World War.

Besides Belgian soldiers, around 250,000 civilians fled to Britain in 1914 before the German invasion of Belgium. Many were later employed in manufacturing armaments. Victor Rousseau (1865–1954), the monument’s sculptor, had himself been a refugee in Britain.

Within an architectural setting designed by Sir Reginald Blomfield (1856–1942), Rousseau’s bronze depicts Belgium as a widow, teaching her children (carrying garlands and flowers symbolising the nine Belgian provinces) about Britain’s friendship and hospitality. The memorial also contains relief sculptures of Justice and Honour, and the arms of the Belgian provinces.

The memorial was unveiled by Princess Clementine of Belgium on 12 October 1920, the fifth anniversary of Edith Cavell’s execution in Brussels. 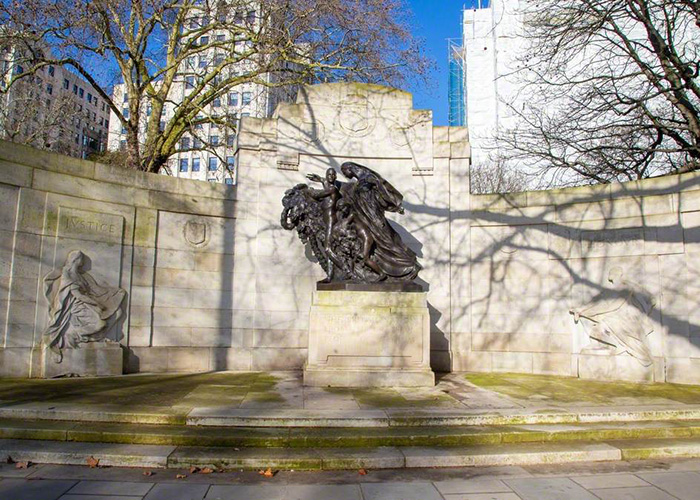 The Carabiniers’ Memorial was dedicated in 1905 and commemorates the officers and men of the 6th Dragoon Guards (‘The Carabiniers’) who died during the second South African (Boer) War between 1899 and 1902. The construction of the memorial was funded by public subscription.

The memorial takes the form of a screen wall in red brick with Bath stone dressings. At its centre is a bronze relief plaque by sculptor Captain Adrian Jones, who had served as a veterinary officer in the first Boer War.

The central plaque shows a mounted trooper with the reins of three horses in the foreground, looking on as his comrades assault a hill in the distance. 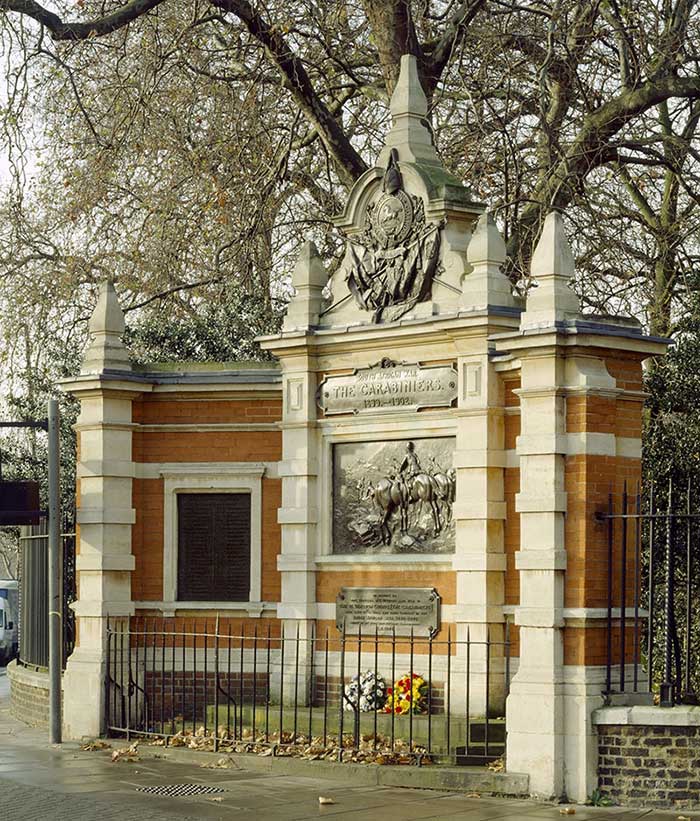 The Cenotaph – from the Greek meaning ‘empty tomb’ – is Britain’s chief national war memorial to the dead of the First and Second World Wars and subsequent conflicts. Designed by Sir Edwin Lutyens in 1919, the first Cenotaph was a temporary monument made from wood, plaster and canvas, commissioned as part of the Victory Day celebrations on 19 July 1919. It was replaced by a permanent version in Portland stone the following year.

Lutyens’s design is simple and austere, giving the Cenotaph a universal quality. A tall pylon supporting a sarcophagus is adorned with the flags of the armed services and sculpted laurel wreaths, carved by Francis Derwent Wood.

Instead of listing individual names, the words ‘The Glorious Dead’ are inscribed, referring to all those who have lost their lives in war. 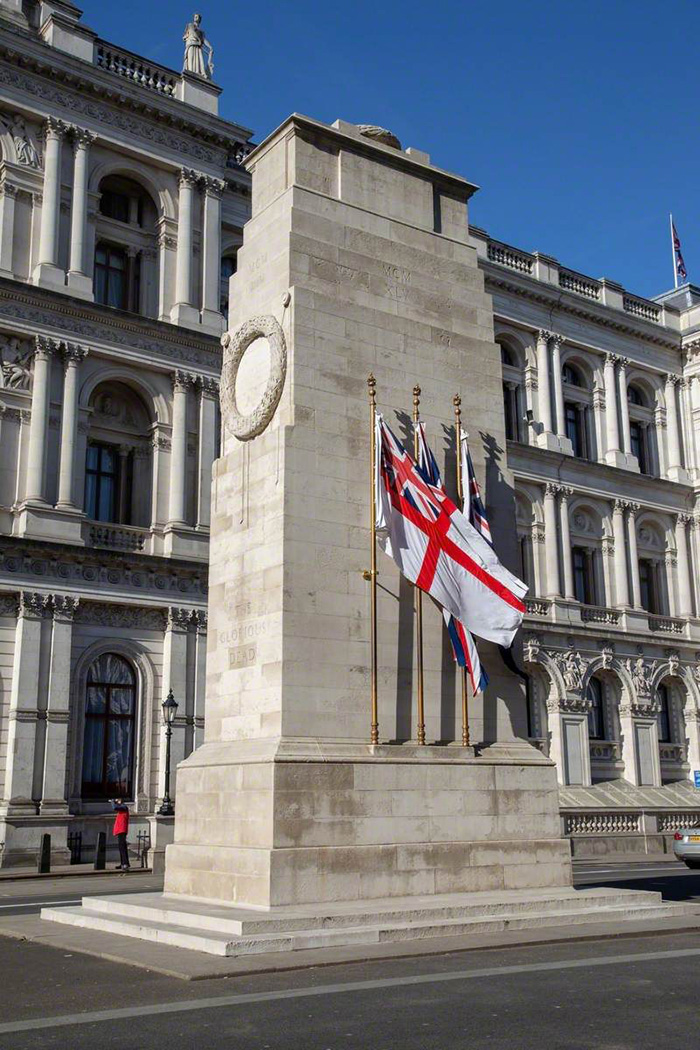 It was designed by architect David Price, with bronze sculpture by Frank Forster, and was erected in 1990.

Historians are divided as to the effectiveness of the Chindit operations, which disrupted some Japanese offensives, but were beset with sickness and malnutrition.

The name Chindit comes from Chinthe, a mythical lion-like guardian of temples in Burma: this appears on the regimental badge and in sculpture on the memorial, with the motto ‘the boldest measures are the safest’. 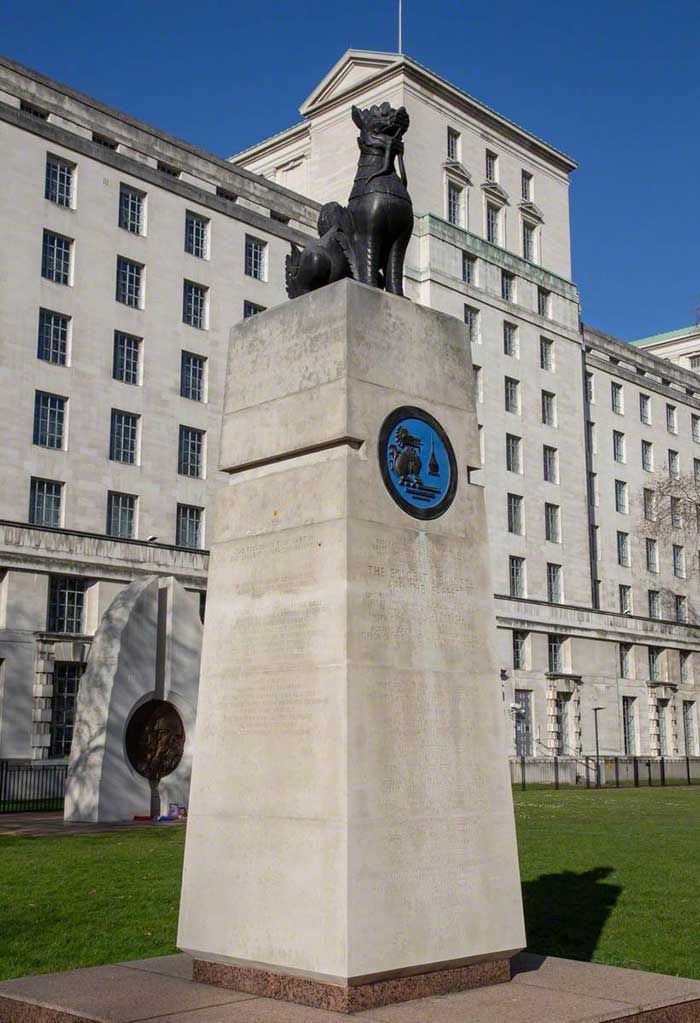 A tall granite pedestal supports three bronze statues of Guardsmen representing a Grenadier, a Fusilier and a Coldstream Guard. Above them rises a bronze female figure representing Honour, who holds out laurel crowns. The sides of the memorial are adorned with Highland targes or shields, and list the Guards’ battle-honours in the Crimea, at the Alma, Inkerman and Sebastopol.

The memorial was moved 30 feet to the north in 1914 to make space for the statues of Florence Nightingale and Sidney Herbert, so that the three form a commemorative group associated with the Crimean War. 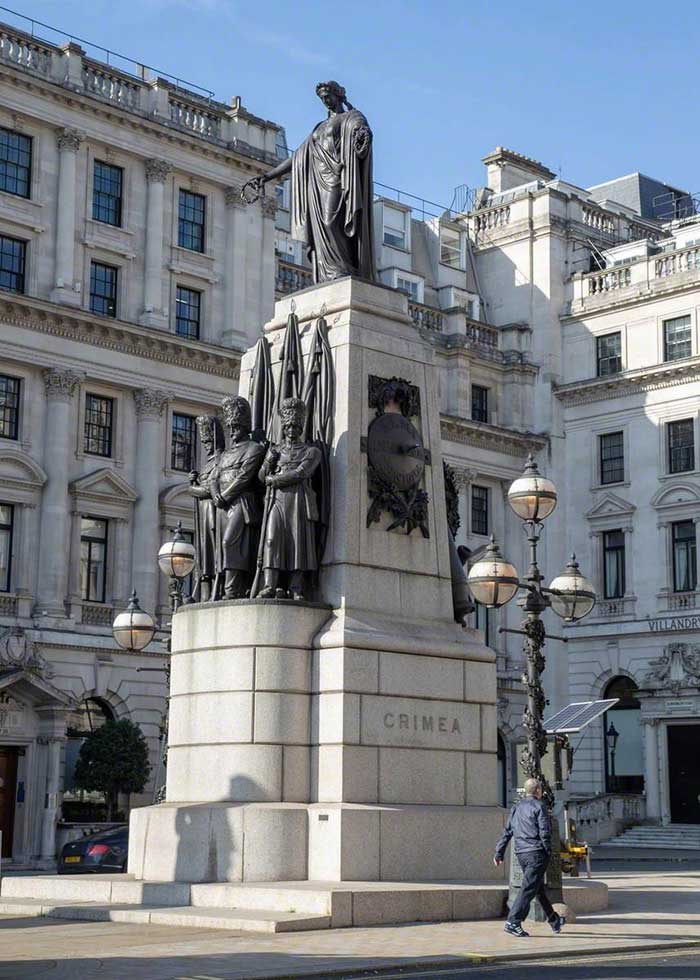 The Machine Guns Corps, a specialist British Army unit, was formed in 1915 and disbanded in 1922, fighting mainly in the First World War. From its 170,000 servicemen, almost 30% were killed, wounded, missing, or captured.

The sculptor, Francis Derwent Wood, combined classical beauty with the deadly reality of the machine gun, a cold symbol of mechanical warfare. The memorial was erected nearby in 1925, dismantled in 1945 and re-erected at its current location in 1962. 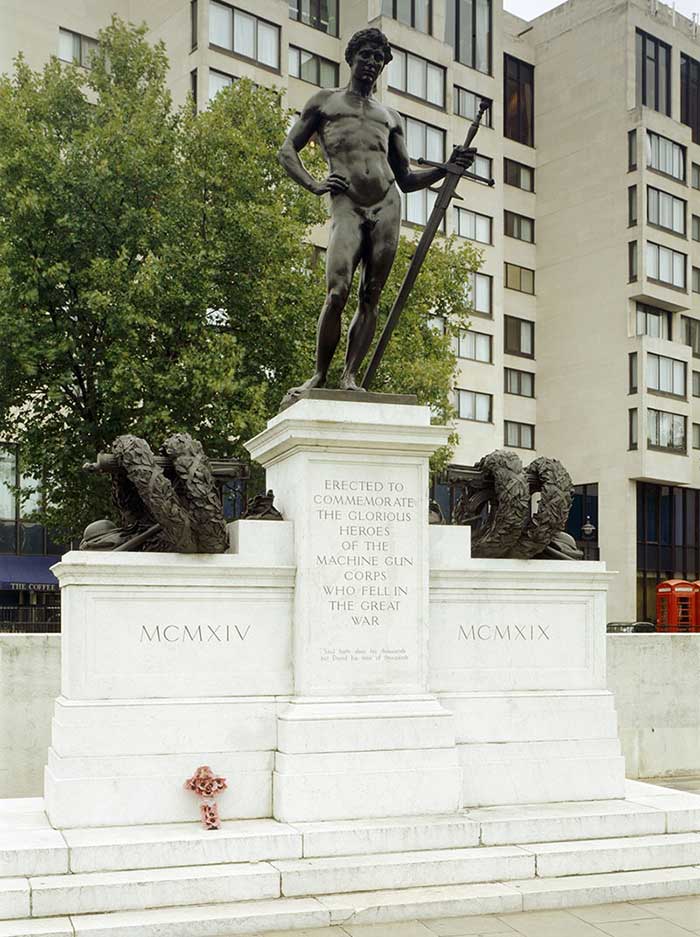 The Marble Arch is a triumphal arch designed by the architect John Nash and carried out between 1827 and 1830. It was originally constructed as part of King George IV’s scheme to develop Buckingham House into Buckingham Palace.

Based on the Arch of Constantine in Rome, the marble-faced arch with its bronze gates was to form a grand entrance on the east side of the palace and was envisaged as a memorial to Britain’s victories against Napoleonic France.

The arch is covered with sculptures, on the north side by Sir Richard Westmacott and on the south by EH Baily. These were added when the arch was dismantled and erected in its present position in 1851 at Cumberland Gate. 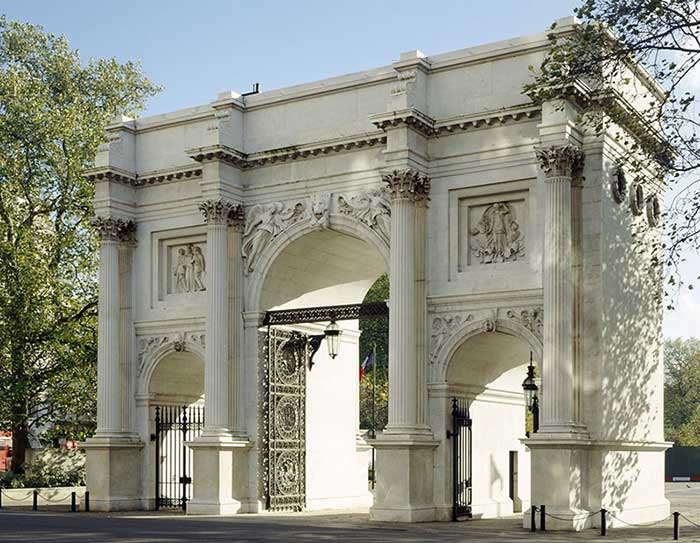 Some 548,000 soldiers served in the Royal Regiment of Artillery during the First World War. This memorial, unveiled in 1925, is to 49,076 artillerymen killed in that conflict, and to another 30,000 dead from the million who served in the Second World War. The latter is marked by bronze panels added in 1949.

A stone plinth supports a life-sized howitzer (an artillery piece), symbolising the destructive power of such big guns in the conflict. On each side are four bronze figures of artillerymen in practical service dress, including a dead soldier lying beneath his greatcoat. Sculpted friezes on the plinth sides show artillerymen in action during the First World War.

The sculptor, Charles Sergeant Jagger, was determined to portray the stark reality of warfare. 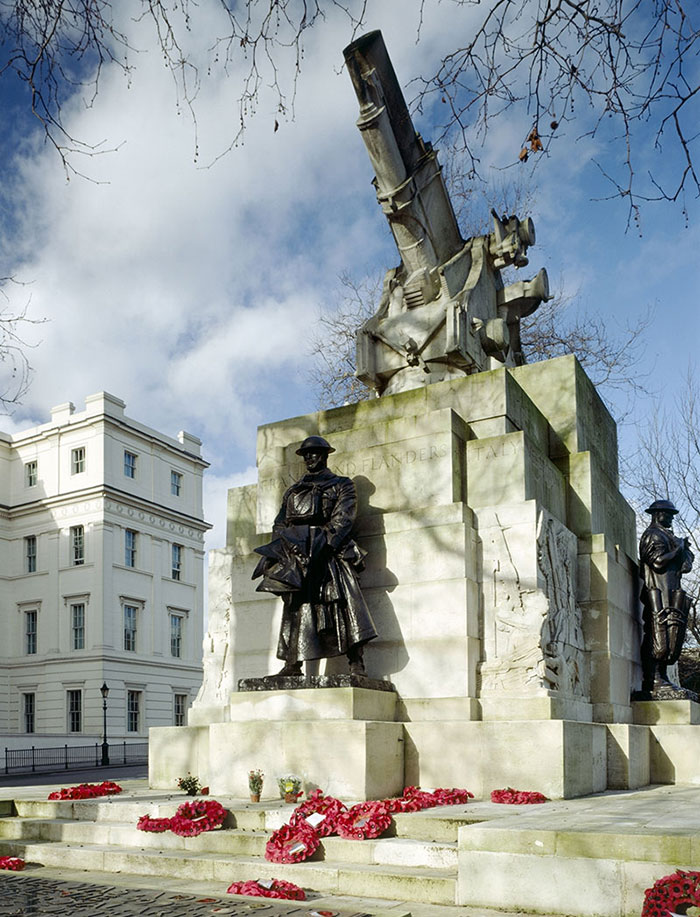 The Wellington Arch was designed by the architect Decimus Burton and built in 1826–9 as an entrance to the grounds of Buckingham Palace. It originally formed a group with a very fine Ionic screen directly opposite it, which still forms an entrance to Hyde Park.

Like the Marble Arch, it was intended to commemorate victory over Napoleon. In 1846 a giant equestrian statue of the Duke of Wellington was placed on top of the arch, causing controversy as it was widely deemed to be absurdly disproportionate.

When the arch was moved to its present position in the 1880s, the statue of Wellington was removed from the arch and re-erected in Aldershot. In 1912 the bronze quadriga (four horse chariot) sculpture, by Captain Adrian Jones, was erected on top of the arch. It  represents Peace, who holds an olive branch in one hand and a laurel wreath in the other, descending on the Chariot of War. 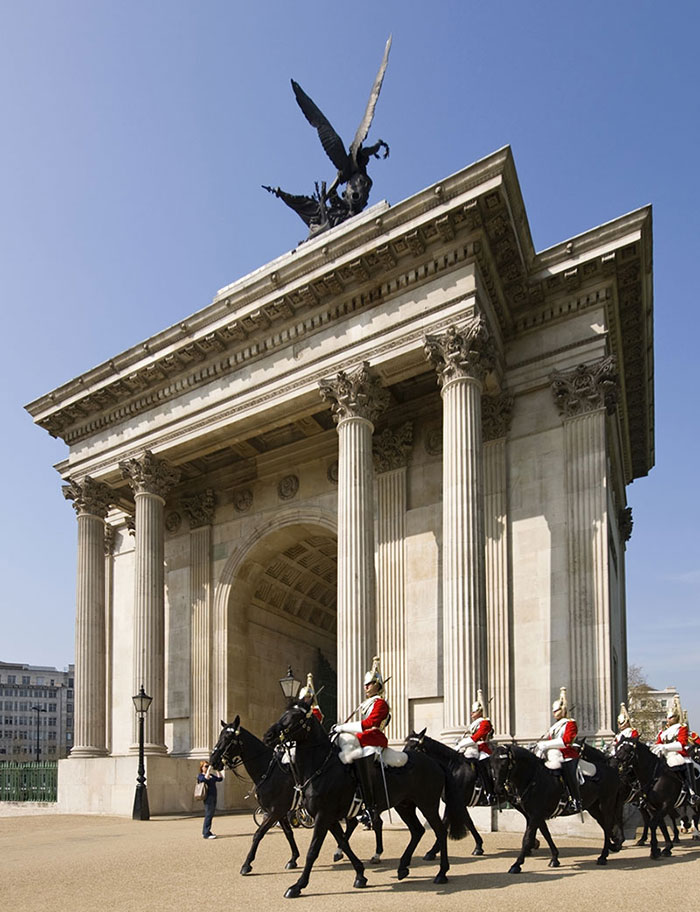