When Byland Abbey was taken into state care in 1921, the Office of Works cleared the site to allow consolidation of the monument and enable public access. Objects found during this clearance work now form the majority of the collection held by English Heritage. The collection offers excellent evidence for the development of 12th-century Cistercian architecture. Several objects are nationally significant, either being exceptional survivals or unique to Britain.

Other objects found in early 19th-century excavations by the abbey’s then owner, Martin Stapylton, who was searching for the grave of Byland’s founder, are held in private ownership.

The English Heritage collection consists largely of architectural stonework, most of which can be closely dated within the five main phases of Byland’s construction between 1155 and 1195. Other objects provide evidence for industrial activities, including tile production and distilling. There are also some unique and nationally significant items, including the only known ink stand likely to have been used to sign a deed of surrender during the Suppression of the Monasteries.

Explore a selection of highlight objects below.

This is the most complete example of a medieval ink stand ever found at a monastic site in Britain. The upper surface has 15 small holes to hold feather quills, and three wells for ink, water (for cleaning) and sand (for blotting).

It was found in the chapter house, where the monks would have met daily for meetings. It is therefore likely to have been used by the last abbot to sign the deed surrendering the monastery to the king when the abbey was suppressed in 1538 – making it the only known ink stand to have been used for this purpose. 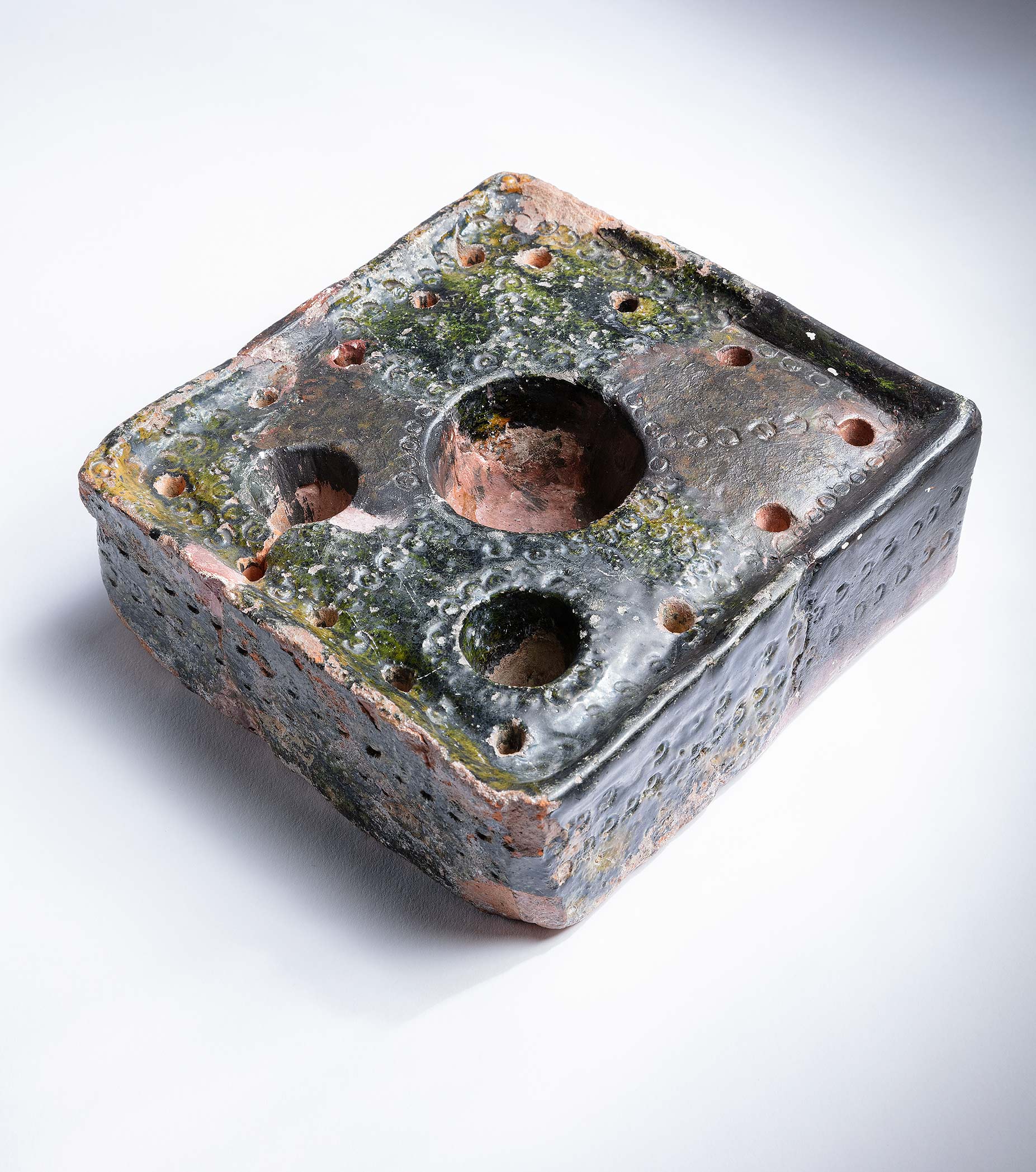 This 12th-century grave slab is decorated with a sword, signifying that it belonged to a layman – probably a patron of the abbey. A 16th-century account records that the tomb of Roger de Mowbray, the abbey’s founder, in the chapter house at Byland was decorated with a sword. Although Mowbray died in Lebanon, the grave cover is likely to be a memorial dedicated to him.

It may have been removed from the chapter house at the abbey’s suppression in 1538, or in the 19th century during antiquarian investigations.

This section of a corbel table (a row of stone supports) comes from a building roofline. It features a grotesque mask, possibly a lion, with its mouth forming a spout for rainwater. 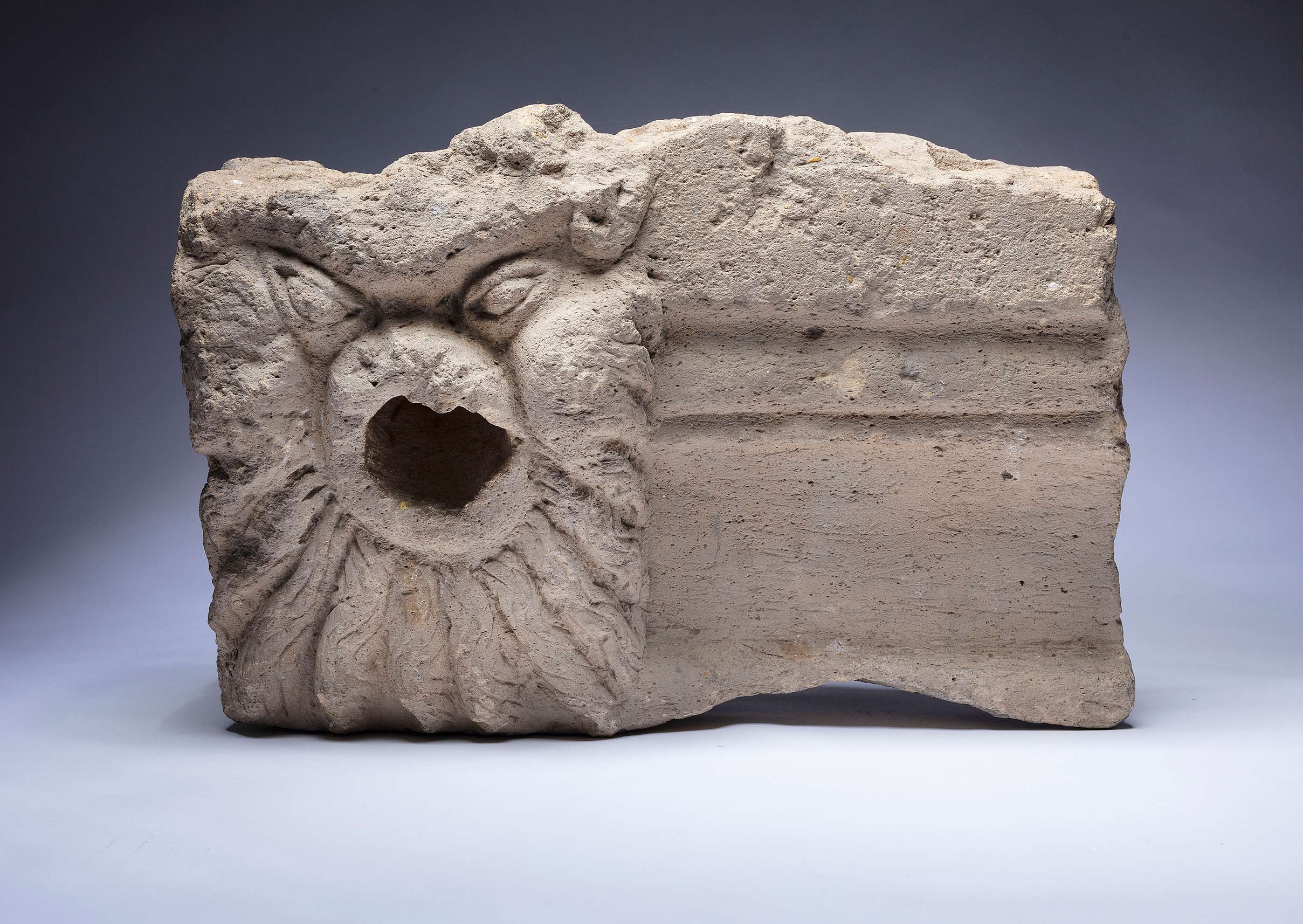 This conical ceramic vessel is known as an aludel, which was part of distilling apparatus in the medieval period. It would have sat between a cucurbit (another ceramic pot, heated from below) and the alembic (still) hood, allowing the contents of the pot to condense on the hood and the distilled liquid to be collected.

The apparatus was not necessarily used for making alcohol. Distilling was also used by alchemists in experiments to change the nature of materials, and could also be used for making medicines from plants. 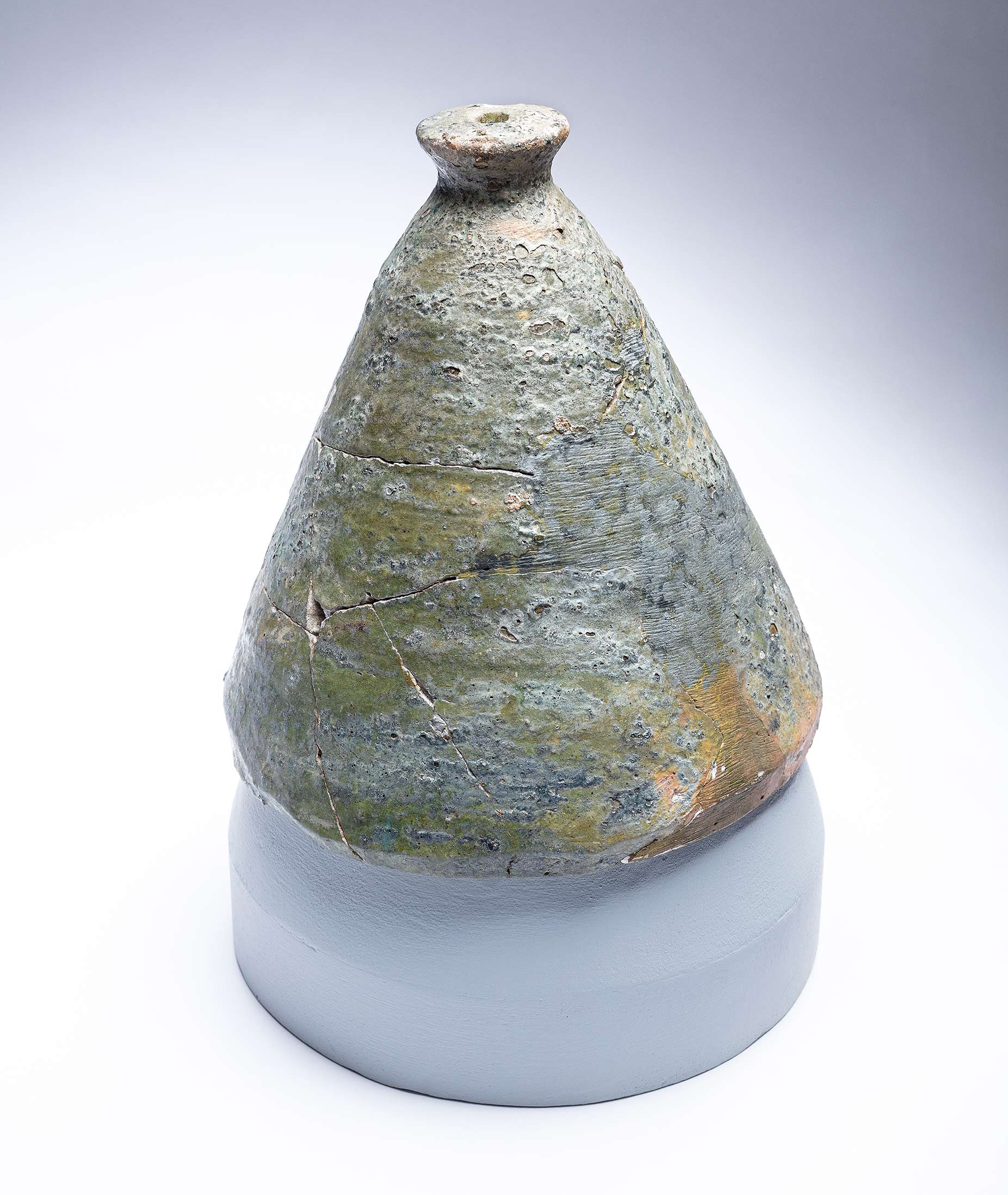 This brass shield is part of an inlay scheme from a stone tomb slab. It depicts the arms of the de Roos, Parr and Fitzhugh families, who were patrons of Byland.

The combination of arms suggests that the tomb may have belonged to Elizabeth de Roos of Kendal (d.1380) or her descendant Sir William Parr (1434–83). 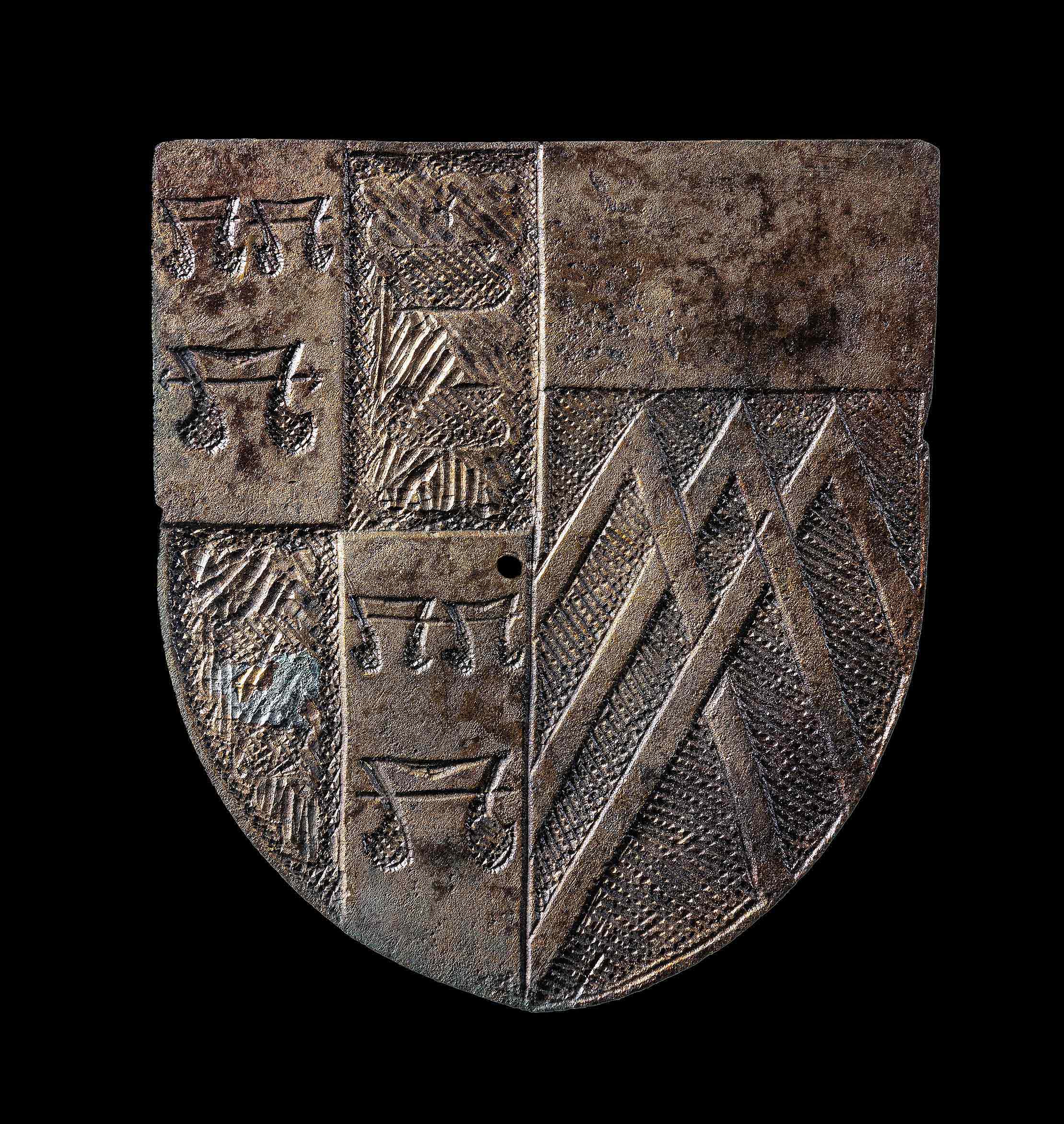 These fleur-de-lys mosaic floor tiles were set vertically and formed the riser of a step, probably leading to the chapel altars. The fleur-de-lys (a stylised lily) is a symbol of the Holy Trinity and an emblem of the Virgin, to whom Byland Abbey is dedicated. This was a popular design found at many monastic sites. 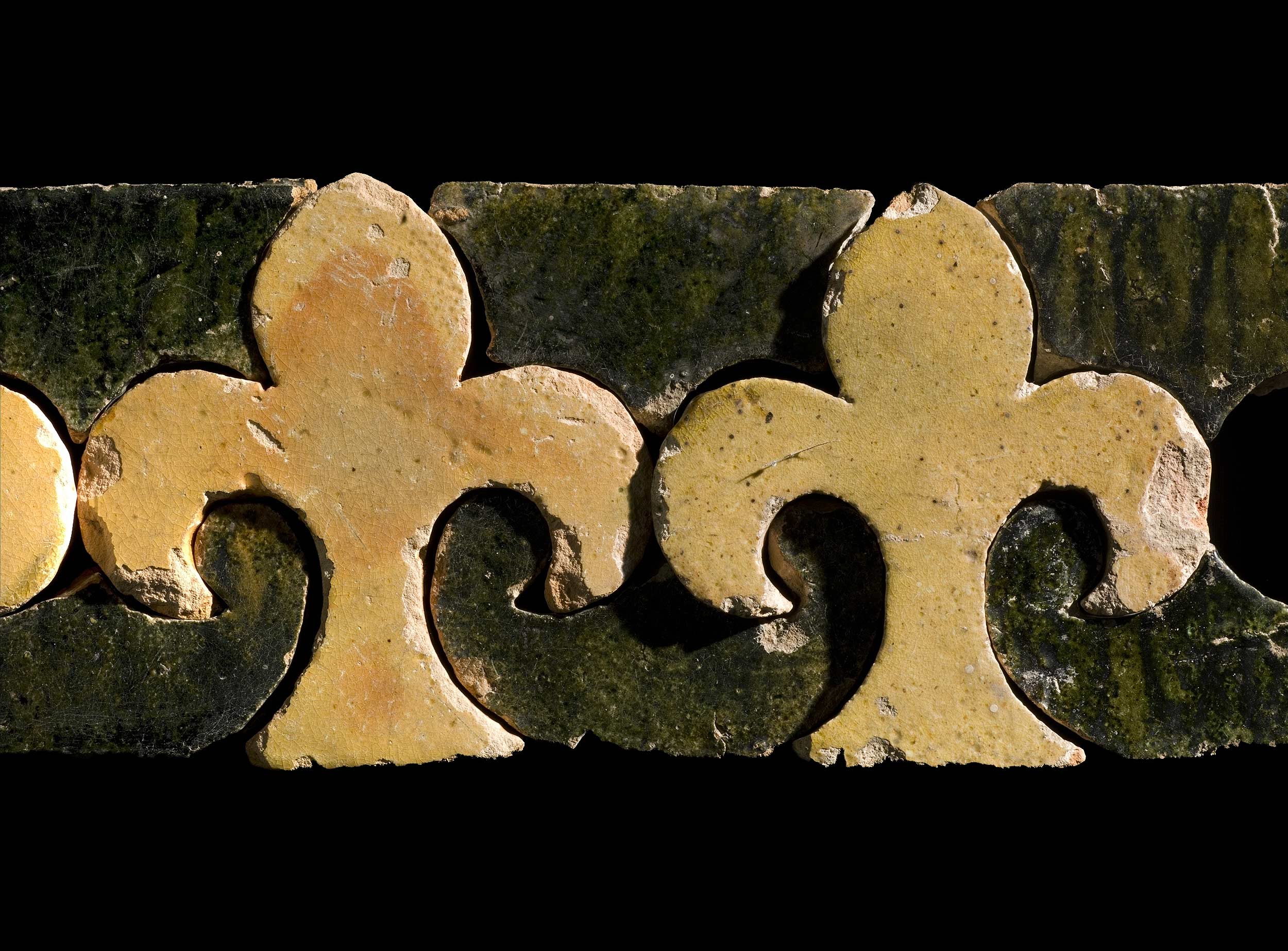 This free-standing socketed lectern base is the only known example of its type. The original shaft and book stand would have been made from timber. The lectern would have been used in the chapter house for daily readings, including a chapter from the Rule of St Benedict. 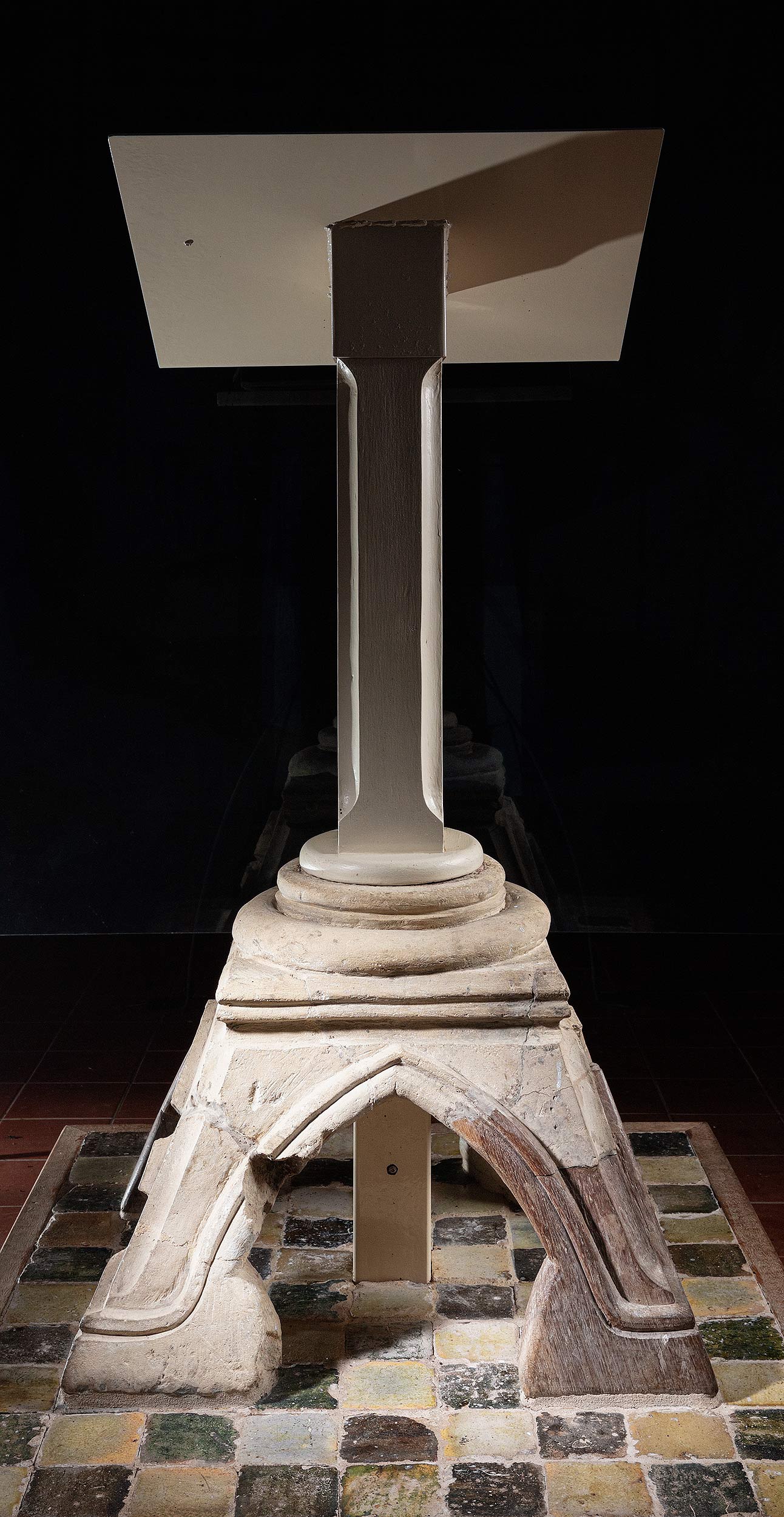 This statue niche has a decorative canopy which features tracery panels in the Perpendicular style, dating it to the late 14th or 15th century. It formed part of a screen, either one that divided a section of the church, or a reredos (the screen behind an altar). Each niche would have accommodated a statue, but none from the site survive. 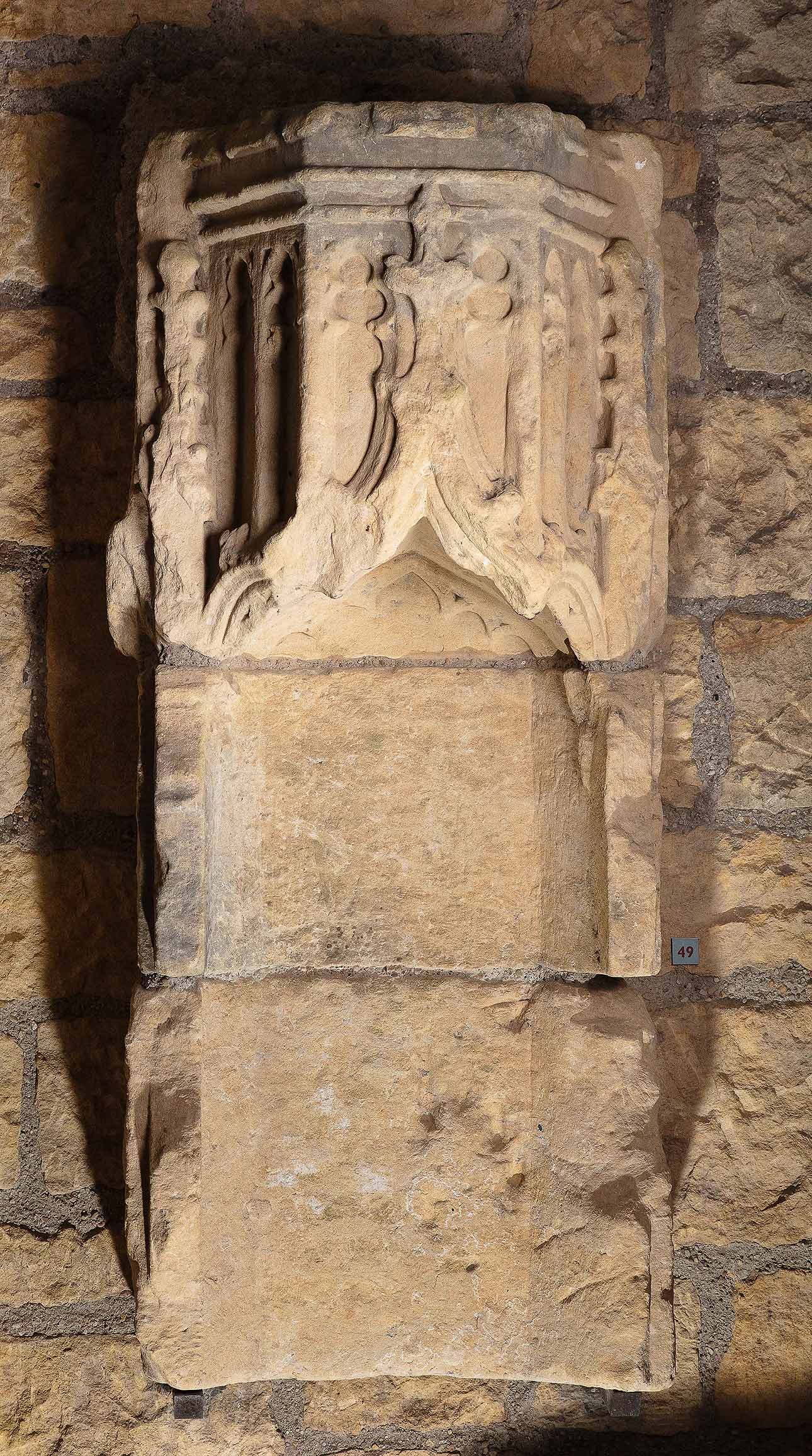 These iron dividers are a marking-out tool used by master masons to take measurements from a template and transfer them onto stone, after which carving could begin. A template for the great rose window in the west wall of the church at Byland still survives on the internal side of the wall. 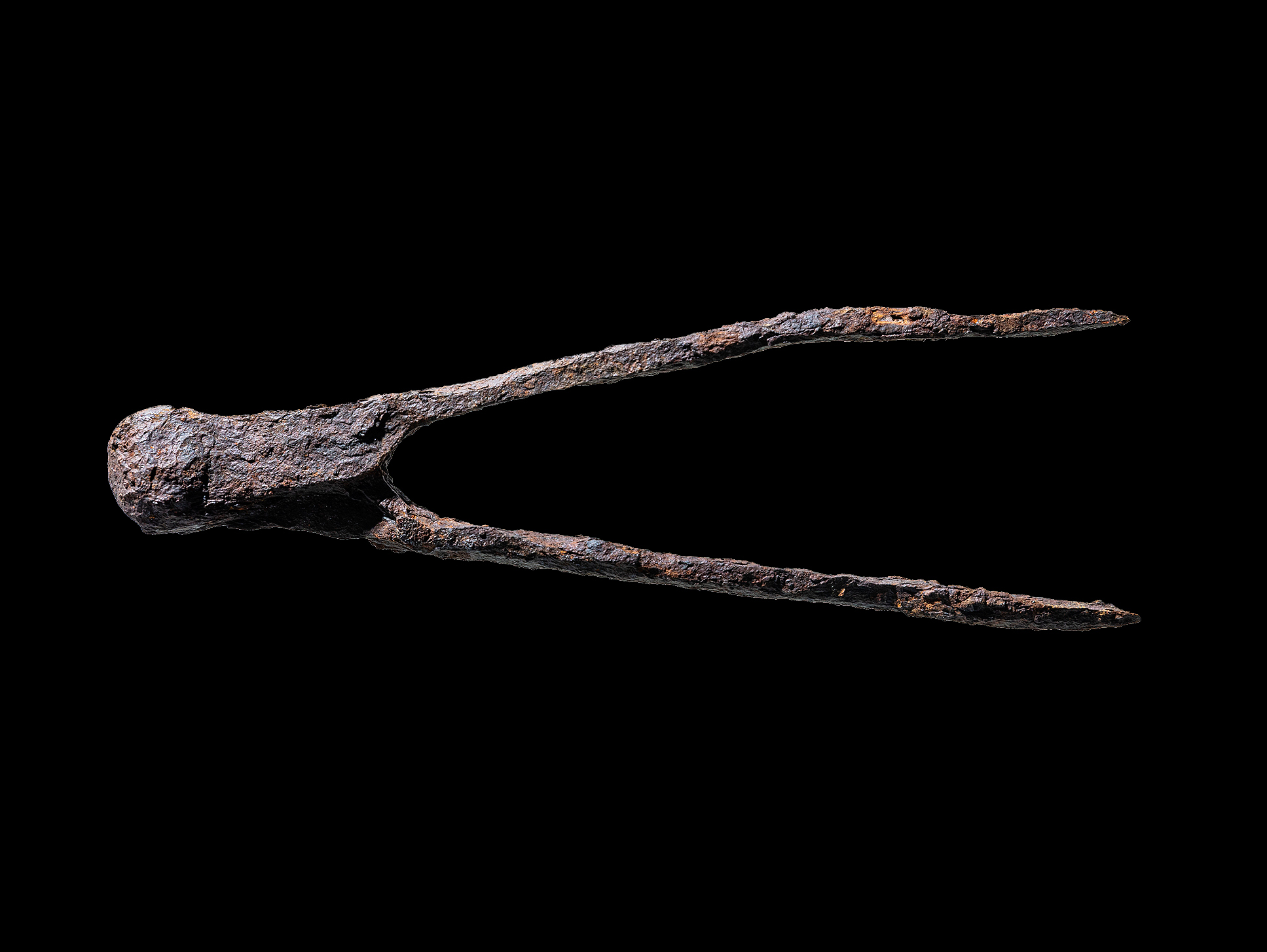 This tenancy agreement dating to 1534 is between John Ledes, Abbot of Byland, and William Storer of Old Byland Grange, a property owned by the abbey. Two copies of this agreement were written on the same piece of parchment, which was then (uniquely) cut in half to prevent fraudulent rewriting. This is Storer’s copy and retains the wax seal of the abbot.