Nestled in a spectacular wooded gorge stands a monument to British industry – the world’s first iron bridge. Crossing the River Severn, it was completed in 1779 and opened to traffic in 1781. It became a UNESCO World Heritage Site in 1986 and remains an iconic feature of Britain’s industrial past.

The world’s first iron bridge emerged during a time of immense change in Britain – it was the dawn of the Industrial Revolution. New technologies were being developed and the country’s rural landscape was changing as an industrial nation began to take shape.

One such development took place in 1709, in the Shropshire village of Coalbrookdale. Abraham Darby (1678–1717) – the first in what would become a distinguished dynasty of iron masters – had pioneered an innovative method of iron smelting.

Using coke made from local coal to fuel furnaces rather than charcoal, Darby’s discovery made the mass production of cast iron economically viable.

With this breakthrough in production, the iron trade in Britain accelerated and local industry began to flourish.

One of the boldest attempts with a new material was the application of cast iron to bridges (Thomas Tedgold, English engineer and author, 1824)

As industry around the gorge grew, so did the need for a strong and durable bridge to transport goods across the river. In 1773, Thomas Farnolls Pritchard – an architect from Shrewsbury – had a bold idea. Combining engineering expertise and new iron-casting techniques, he proposed the world’s first iron bridge, which would link the parishes of Madley and Benthall over what was one of the busiest rivers in the country.

Pritchard’s designs were approved by Act of Parliament and in 1777 construction began. Overseen by Darby’s grandson Abraham Darby III after Pritchard’s death, it was to be a cast iron single-span bridge of 30 metres, with five main semicircular ribs.

The Impact of the bridge

It must be the admiration, as it is one of the wonders, of the world. (John Byng, traveller and writer, 1784)

The fusion of natural beauty and industrial activity around the Severn Gorge attracted many artists and writers. Richard Warner, a writer and priest, described Coalbrookdale in 1801 as ‘a scene in which the beauties of nature and processes of art are blended together in curious combination’.

But the unveiling of the Iron Bridge brought new visitors, who marvelled at its scale and ingenuity. The bridge became a centre of commerce and a town known as Ironbridge grew up around it.

The structure also inspired the future of bridge design and engineering. Its massive strength saw it survive the great flood of 1795, motivating builders and engineers like Thomas Telford to construct their own iron structures.

It is one arch, a hundred feet broad, fifty-two high, and eighteen wide; all of cast-iron, weighing many hundred tons. I doubt whether the Colossus at Rhodes weighed much more. (John Wesley, Anglican cleric and theologian, 1779)

Although Darby commissioned many paintings and engravings of the finished bridge, a lack of images or eyewitness accounts meant that, for over 200 years, little was known of exactly how Darby managed to erect this structure of almost 400 tons.

But in 1997 a small watercolour sketch by Elias Martin, which illustrated the building of the bridge, was discovered in a Stockholm museum. This exciting find, along with recent research, revealed much about the building process.

While Darby’s accounts suggest the use of scaffold poles, timber and rope during construction, Martin’s painting shows a wooden framework used to raise the half-ribs from the deck of a vessel.

Research also revealed that 70% of the components of the bridge – including all the large castings – were made individually to fit, and all differ slightly from one another as a result. Darby’s workers employed joining techniques used in carpentry, such as dovetail and shouldered joints, adapting them for cast iron.

We visited Blists Hill, near to the Iron Bridge, to see the original iron casting process that would have been used to create the bridge components in action. Watch more to see a miniature bridge section being cast and learn what makes the bridge so strong.

Surveying work on the Iron Bridge

The Future of the Iron Bridge

The bridge remained in full use for over 150 years, by ever-increasing traffic. But in 1934 it was finally closed to vehicles and was designated an Ancient Monument.

Since then, massive works to strengthen the bridge have been undertaken. In 1973, for example, a reinforced concrete strut was built across the bed of the river to brace the two abutments.

In 1999–2000 English Heritage, together with the Ironbridge Gorge Museums Trust, carried out a full archaeological survey, record and analysis of the bridge. The three-dimensional digital record now enables detailed understanding and management of the structure.

In 2018, English Heritage completed a major conservation project to repair the Iron Bridge. It had been suffering due to stresses in the ironwork dating from the original construction, ground movement over the centuries and an earthquake at the end of the 19th century. The bridge now stands as testament to this large-scale work, for future generations to enjoy.

Read more about the project

Abraham Darby, a former brass founder, discovered that coal from Coalbrookdale could be used to smelt iron. This enabled the economically viable mass production of cast iron. Kickstarting the Industrial Revolution, the foundry was producing large quantities of cast iron goods within a couple of years.

Shrewsbury architect Thomas Pritchard had a bold idea. Capitalising on engineering expertise and new iron-casting techniques, he proposed the world's first iron bridge, to be cast and built by Abraham Darby's grandson, Abraham Darby III.  A strong and durable bridge, it would support the transportation of goods across the River Severn and cut down barge traffic. 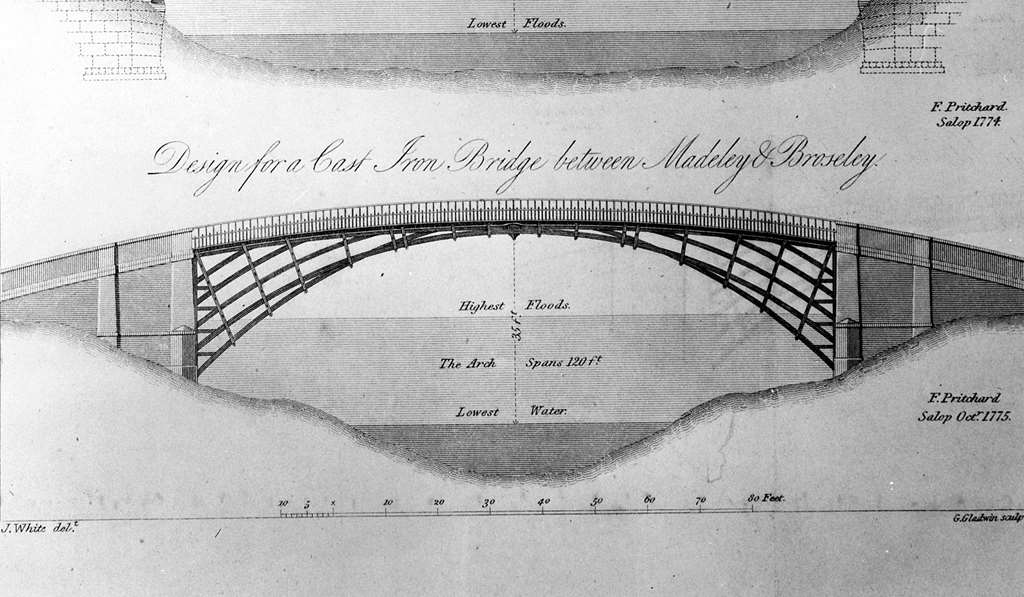 Pritchard's designs for a single-span bridge of 30 metres (100 feet) were approved by Act of Parliament. Construction began in the same year but sadly, Pritchard died a month after work began. 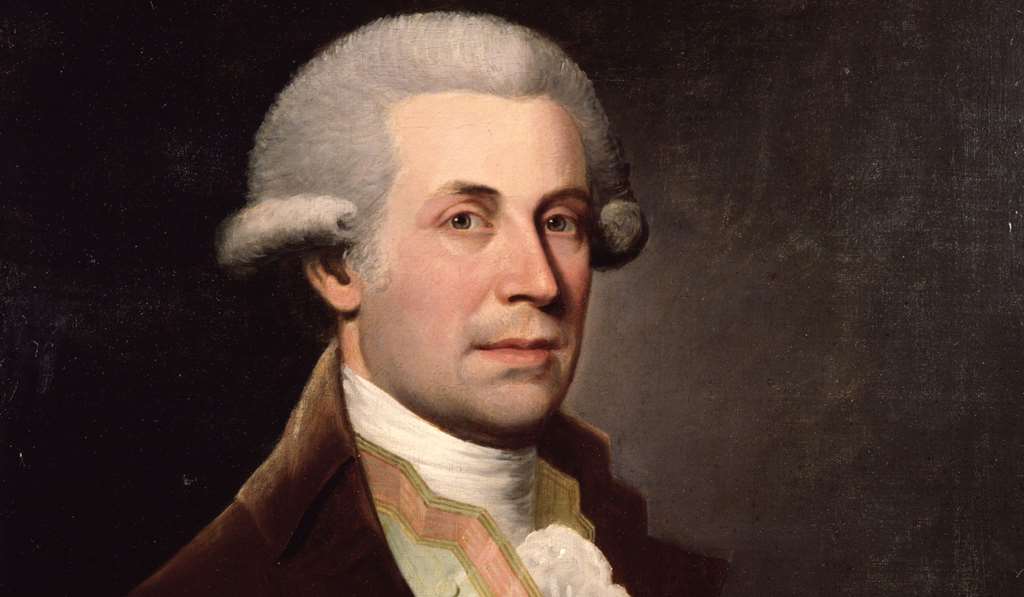 Abraham Darby III agrees to continue the project. All the iron is cast at his Coalbrookdale furnace.

The bridge opened to traffic on the 1st January 1781. It soon became a must-see for tourists and sightseers from England and further afield. It attracted writers, poets and painters, who marvelled at its scale and ingenuity. 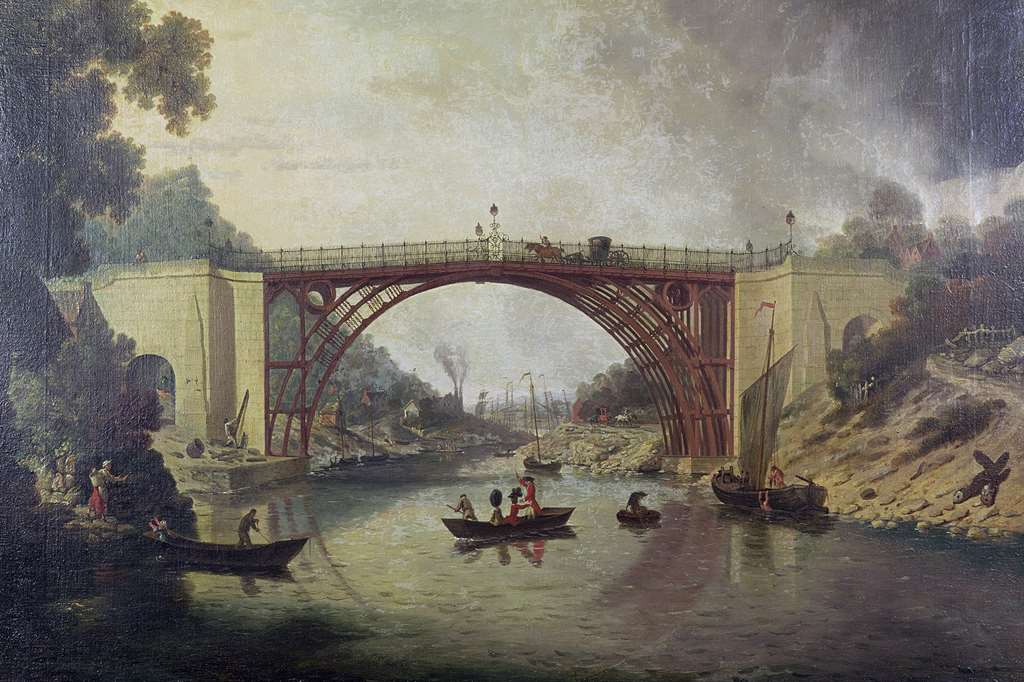 The bridge's great weight helped it to withstand severe flooding. However, the enormous stone abutments begin to cause cracks in the ironwork as the river banks shift over time. 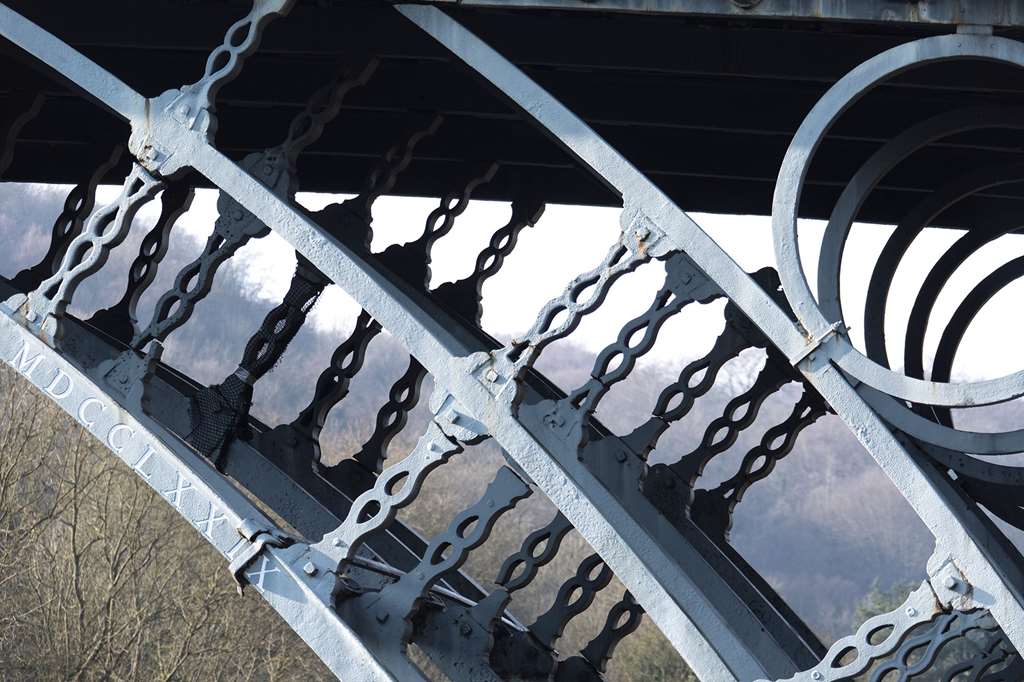 The south abutment was modified several times and eventually replaced, first by two wooden land arches and then by cast iron ones.

After 150 years, the bridge was finally closed to vehicles and designated an Ancient Monument.

A reinforced concrete strut is inserted on the river bank to brace the two abutments and to counteract the tendency of the gorge sides to push inwards.

A small watercolour sketch by an artist called Elias Martin came to light in Stockholm, finally shedding light on the mystery of how the huge structure had been built.

A full archaeological survey, record and analysis of the bridge was made by English Heritage and the Ironbridge Gorge Museums Trust, providing a detailed understanding of how the structure had fared. 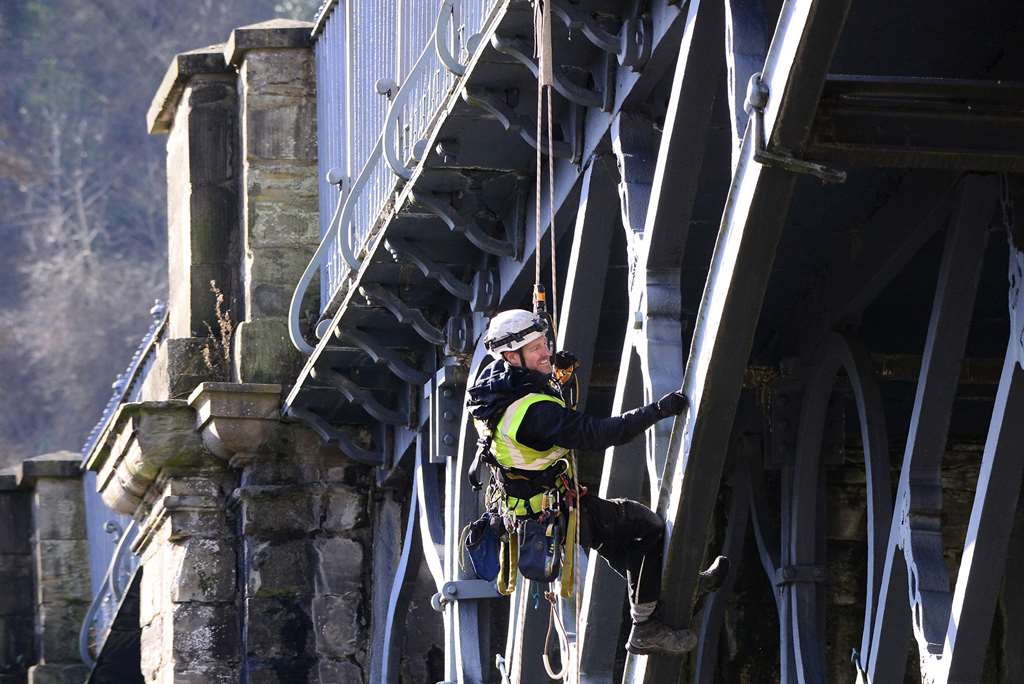 English Heritage announces its biggest conservation project to date - the repairing, conserving and repainting of the Iron Bridge beginning in 2017. Work is completed in 2018 and the bridge is repainted to its original colour.