Kenilworth is one of England’s most spectacular castles. Once standing at the heart of a vast hunting ground and surrounded by a huge man-made lake, it represented a rich prize to the generations of great men who owned and embellished it – among them John of Gaunt, Henry V and Robert Dudley, Earl of Leicester. The castle’s fortifications were dismantled in 1650, and the ruins later became famous thanks in part to Walter Scott’s 1821 romance Kenilworth.

The First Castle at Kenilworth

Henry I (reigned 1100–35) granted land from his manor of Stoneleigh to his chamberlain and treasurer, Geoffrey de Clinton (d.1133), in about 1120, seemingly to counter the influence of his neighbour the Earl of Warwick.[1] De Clinton retained the southern part of the land for a castle, park and mere; the sandstone keep dates to the 1120s.[2] He assigned the northern part to an Augustinian priory he founded there in about 1124. Its canons were given permission to fish in the mere and graze their livestock in the park.[3]

Only a generation later this strategically important castle was in royal hands. Henry II (r.1154–89) garrisoned it against his rebellious sons in 1173–4, acquiring it outright in the 1180s.[4]

Download a plan of Kenilworth Castle
Kenilworth Castle from the south, looking across the site of the mere to the outer curtain wall and the ruins of Leicester’s Building

Royal Ownership and the siege of 1266

In the early 13th century, King John (r.1199–1216) spent the considerable sum of about £1,100 strengthening Kenilworth with curtain walls and towers, and improving it with work on a dam and possibly the domestic accommodation.[5]

In 1253, John’s successor, Henry III (r.1216–72), gave Kenilworth to his sister Eleanor and her powerful husband, Simon de Monfort, 6th Earl of Leicester. The outwork known as the Brays may have been created at this time.

The reformist de Montfort fell at the Battle of Evesham in 1265, but his son, Simon the younger, subsequently held Kenilworth against the king through an extraordinary six-month siege – the longest in English medieval history. The garrison eventually surrendered to the king on 13 December 1266.

Read more about the siege of Kenilworth
The Water Tower overlooked the lower pool of the mere, and was probably built by Thomas of Lancaster in the early 14th century to provide additional accommodation for his retainers

The House of Lancaster

Immediately after the surrender, Henry III gave de Montfort’s castle, land and titles to his second son, Prince Edmund (1245–96), who had been a commander during the siege. Edmund subsequently became the 1st Earl of Lancaster, and accumulated the vast collection of lands that would form the duchy. Kenilworth remained in the hands of this branch of the royal family for a century. In 1303 Edmund’s son Thomas (d.1322), the 2nd Earl, acquired rights that allowed him to enclose a vast hunting park south and west of the mere. He also had a chapel built between 1314 and 1322.[6]

Estranged from his first cousin Edward II (r.1307–27) early in the century, Thomas was in outright rebellion against him by the 1320s. After his capture and execution in 1322, Kenilworth was briefly back in royal hands. Yet it was here only four years later that Edward was held prisoner by Thomas’s brother Henry (1326–45), 3rd Earl of Lancaster, and forced to relinquish the throne.[7]

John of Gaunt’s great hall, built between 1373 and 1380. The hall itself was on the first floor, entered through the arch on the left

Ownership of Kenilworth came to John of Gaunt (1340–99), fourth son of Edward III (r.1327–77), following his marriage in 1359 to the Lancastrian heiress, Blanche (d.1368). Immediately after his second marriage, in 1371, to the daughter of the king of Castile and León, and his assumption of his father-in-law’s titles, Gaunt started rebuilding Kenilworth on a truly regal scale.

The works lasted two decades and involved construction of the magnificent great hall, together with remodelled apartments, services and kitchens. Gaunt also enclosed the garden and carried out works on the bridges and the park.[8]The names of several of his masons and surveyors are known; some had worked on the rebuilding of Windsor Castle instigated by Edward III.

Find out more about John of Gaunt’s Works 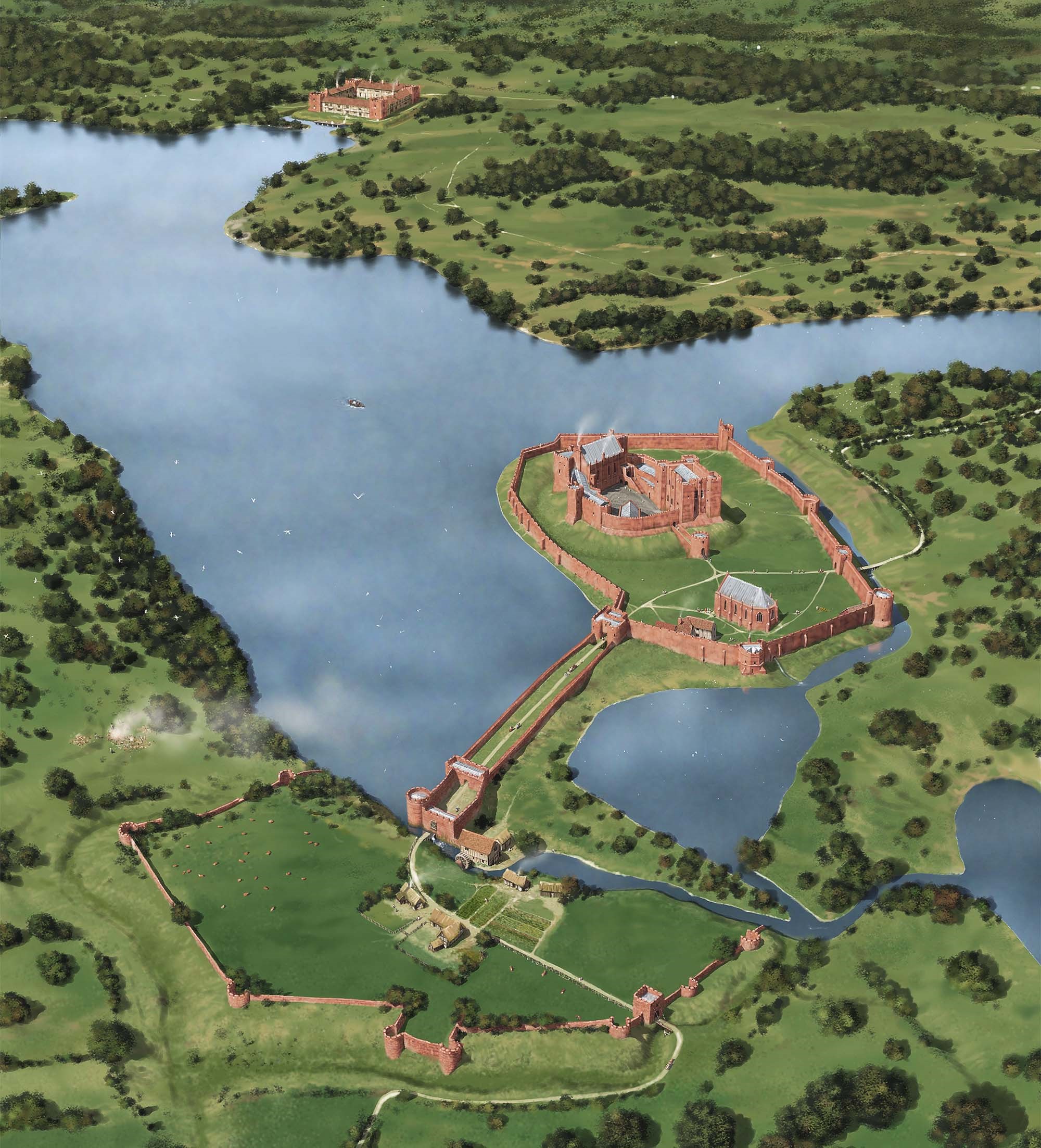 A reconstruction of Kenilworth Castle as it might have appeared in about 1420, showing John of Gaunt's work
© Historic England (illustration by Peter Urmston)

Kenilworth in the 15th and 16th Centuries

When Gaunt’s son became Henry IV in 1399, Kenilworth was brought into the Crown estate, where it would remain for 150 years. Throughout the 15th century, the castle was a favoured residence of the Lancastrian kings, who were drawn here by the excellent hunting. Henry V (r.1413–22) created the moated pavilion at the western end of the mere known as the Pleasance. Works undertaken during this period were mainly repairs.[9]

The Tudor kings continued to use the castle. Henry VII (r.1485–1509) built a tennis court, and Henry VIII (r.1509–47) dismantled a ‘banqueting house’ at the Pleasance, re-erected it within the castle, and built a timber structure closing the inner ward to the east. One surveyor felt that if the latter were rebuilt in sandstone, Kenilworth ‘wold be then the best pporcyoned olde buyldyng for the quantyte wtin yngland’.[10]

John Dudley, Duke of Northumberland (1551–3), de facto regent in the later years of Edward VI’s reign, was granted Kenilworth in 1553. It was Dudley who had the existing stables built, before his execution later that year.[11]

A reconstruction of Kenilworth as it may have appeared in 1575, after the Earl of Leicester’s works
© Historic England (illustration by Peter Urmston)

In 1563, Elizabeth I (r.1558–1603) granted Kenilworth to her childhood friend and favourite, Robert Dudley, John’s son and soon to be Earl of Leicester. She visited four times during ‘progresses’ through her realm – her visit in the summer of 1575 was the longest she made to any courtier during her reign – and Dudley’s embellishments to the castle and its setting were doubtless intended to impress her.

His changes to the landscape were certainly ambitious. On rising ground north of the mere acquired from the former priory he created the chase, an enclosed hunting park of some 320 hectares (800 acres) with dramatic views.[12] Leicester’s Gatehouse, a handsome building of 1571–2, gave access to it from the castle, and an impressive bridge, 183 metres (600 feet) long, carried hunting parties to it over the mere.[13]

Within the castle’s inner court, Leicester also erected the four-storey tower block known as Leicester’s Building, which was designed specifically for the queen’s use in 1572 and improved for her next visit in 1575.[14] He also embellished the park with bowers, arbours, seats and walks, and laid out a privy garden for the queen’s 1575 visit.

Robert Langham, an official in Leicester’s household who was allowed into the garden during the queen’s absence on a hunt, described it in great detail, and the accuracy of his account is borne out by archaeological evidence.

Download Extracts from Robert Langham’s Letters
Kenilworth Castle as it appeared in 1620, in a 19th-century copy of a lost 17th-century wall-painting at Newnham Paddox House, Warwickshire. It shows the castle with its mere and pools before the dismantling of 1650

Kenilworth after the Dudleys

Almost two decades after Leicester’s death in 1588, Kenilworth was sequestered by the Crown after his son, Sir Robert Dudley, refused to comply when James I (r.1603–25) ordered him to return from the Continent.

Four years later the heir to the throne, Henry, Prince of Wales, bought the castle and its estates, a purchase that reflects the importance attached to the castle by the early Stuart monarchy. The future Charles I inherited Kenilworth following his brother’s death in 1612, and used it occasionally, before granting custody to his retainer, Robert Carey, Earl of Monmouth, in 1626.[15]

Kenilworth was taken by the Parliamentarian army in the opening month of the Civil War, August 1642, although it saw no substantial action. In 1649, anxious to avoid the cost of maintaining a garrison, the new regime ordered that it be made ‘untenable’,[16] so the north wall of the keep was destroyed and the outer curtain wall beyond breached.

Leicester’s Gatehouse, which was converted into a house after the Civil War

After the Civil War, Colonel Joseph Hawkesworth bought the castle and estate (as well as Carey’s interest in them) on behalf of a group of Parliamentary soldiers. He retained the castle and divided the estate among his comrades.

In the years that followed, the mere was drained, trees were felled, and interiors stripped out and sold.[17] Only Leicester’s Gatehouse remained in use, converted to a house, apparently for Hawkesworth.[18] According to one Mr Fortescue, writing in the 1660s, the castle at that time was ‘utterly demolished’, apart from some ruins that were testimony to a ‘most stately and magnificent fabric’.[19] Kenilworth became Castle Farm, whose tenant farmers inhabited Hawkesworth’s former home.[20]

In 1665 Charles II granted Kenilworth to Laurence Hyde, 2nd Earl of Clarendon, in whose family’s hands it remained until the 20th century.[21]

From Romantic Ruin to Historic Monument

Despite changing fortunes, Kenilworth has long been a tourist attraction. Curious travellers came even before the Civil War, and by the 1770s visitor numbers were sufficient to warrant production of a guidebook. The Prince Regent himself came in 1819.[22] The mauled majesty of the ruins – its stonework depleted first for road-building and later for aesthetic effect[23] – appealed to Romantic visitors’ sense of the picturesque.

The castle achieved international fame with the publication in 1821 of Sir Walter Scott’s Kenilworth, a tragic novel revolving around Queen Elizabeth, Robert Dudley and his wife, Amy.

In 1937 the car manufacturer Sir John Siddeley bought the castle from George Villiers, 6th Earl of Clarendon, and put it in the hands of the Ministry of Works with a substantial sum of money to fund repairs. The castle became a full-time visitor attraction. In 1958, Siddeley’s son gave the freehold to Kenilworth Town Council.[24]

The 20th century witnessed repairs and works to enhance public access, including the opening of the Brays and causeway as the main visitor entrance in about 1960, the repair and opening of the gatehouse in 2006,[25] the recreation of the Elizabethan garden in 2009, and the installation of viewing platforms in Leicester’s Building in 2014.

Anna Keay, Director of the Landmark Trust and formerly Curatorial Director at English Heritage, led the team that recreated the Elizabethan gardens at Kenilworth Castle in 2009.