The collection from Lindisfarne Priory includes internationally significant Anglo-Saxon stonework: stone crosses, name stones and the world-renowned ‘Viking Raider Stone’. The collection spans the Roman period to the post-medieval period when the site was used by the military, and therefore includes domestic and personal items. A site museum was first established by the site owners, the Crossman family, following their excavations in the late 19th century. Further discoveries were made during consolidation work by the Ministry of Works in the 1920s.

This name stone bears the name of a lady - Osgyth. The design and script resemble the St Matthew carpet page and the display script in the Lindisfarne Gospels. This indicates that it was made around the same time. Osgyth's name is written twice, once in Anglo-Saxon runes and once in Anglo-Saxon capital letters. The overall design of the cross signifies her Christian faith. The stone was originally painted and may have been decorated with a jewel. 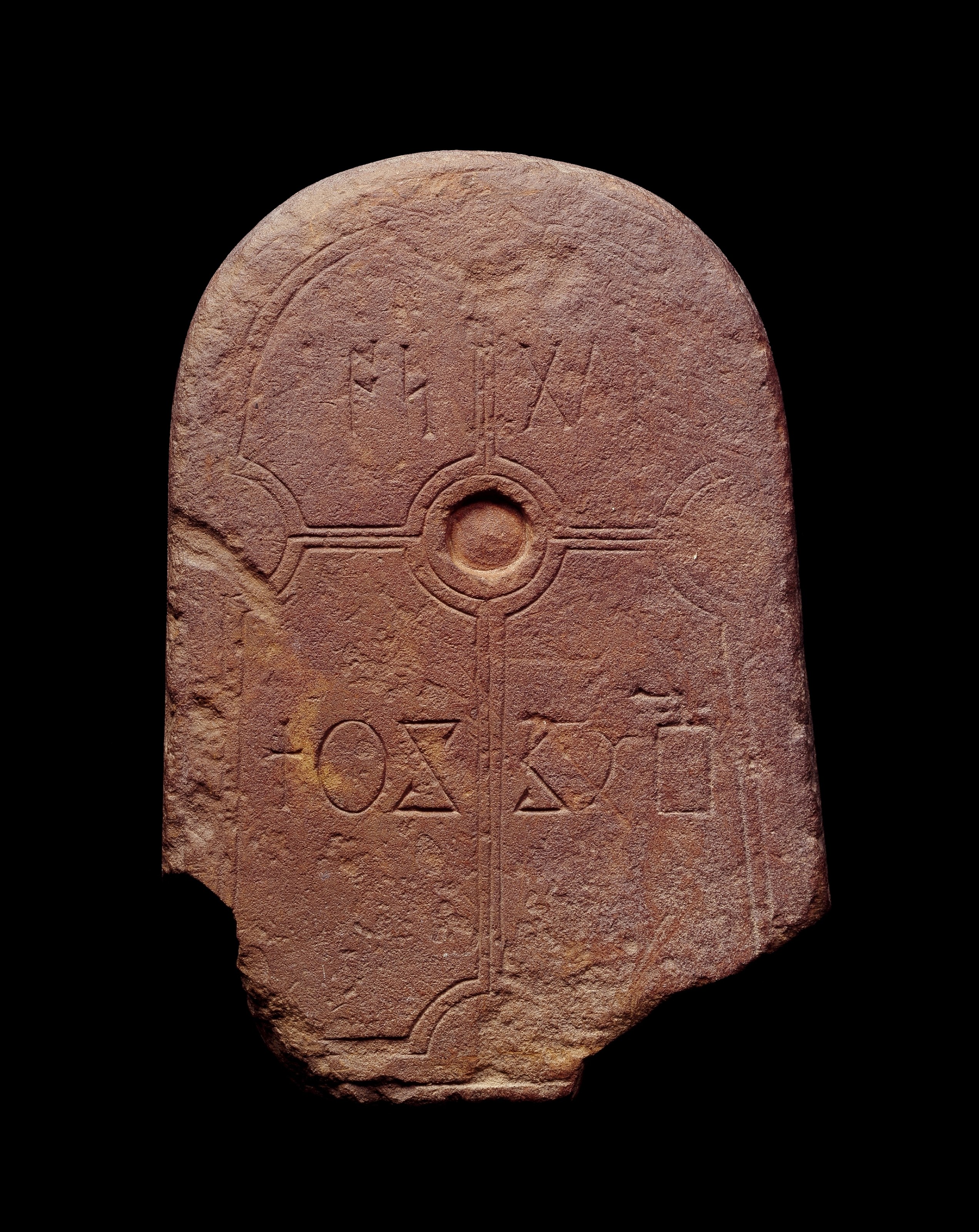 This cross-shaft fragment is decorated with panels of interlace, plant scroll and animals. There are two ribbon animals seen in profile which have intertwining legs and tails, and another crouching beast. It may have been painted originally. The designs appear to be copies of those seen in the Lindisfarne Gospels. 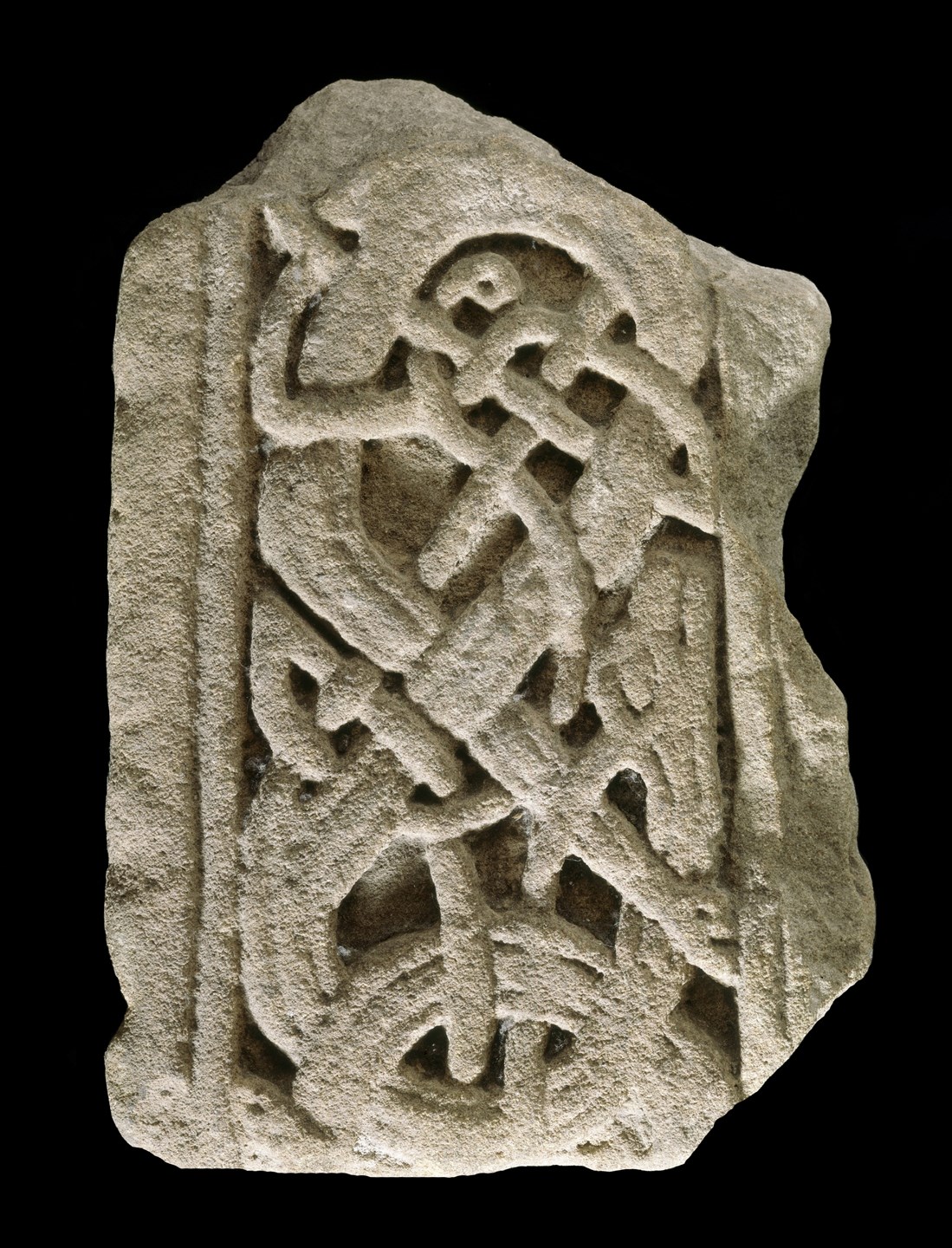 This name stone was made about the same time as the Lindisfarne Gospels. It bears the names of a man, or possibly two men. The names, Beanna and Pausil, are written in Anglo-Saxon capital letters on the lower half of the stone. Anglo-Saxon runes spell part of another personal name, possibly Coena, on the upper half of the stone. The use of a cross indicates Christian faith. The stone was originally painted. 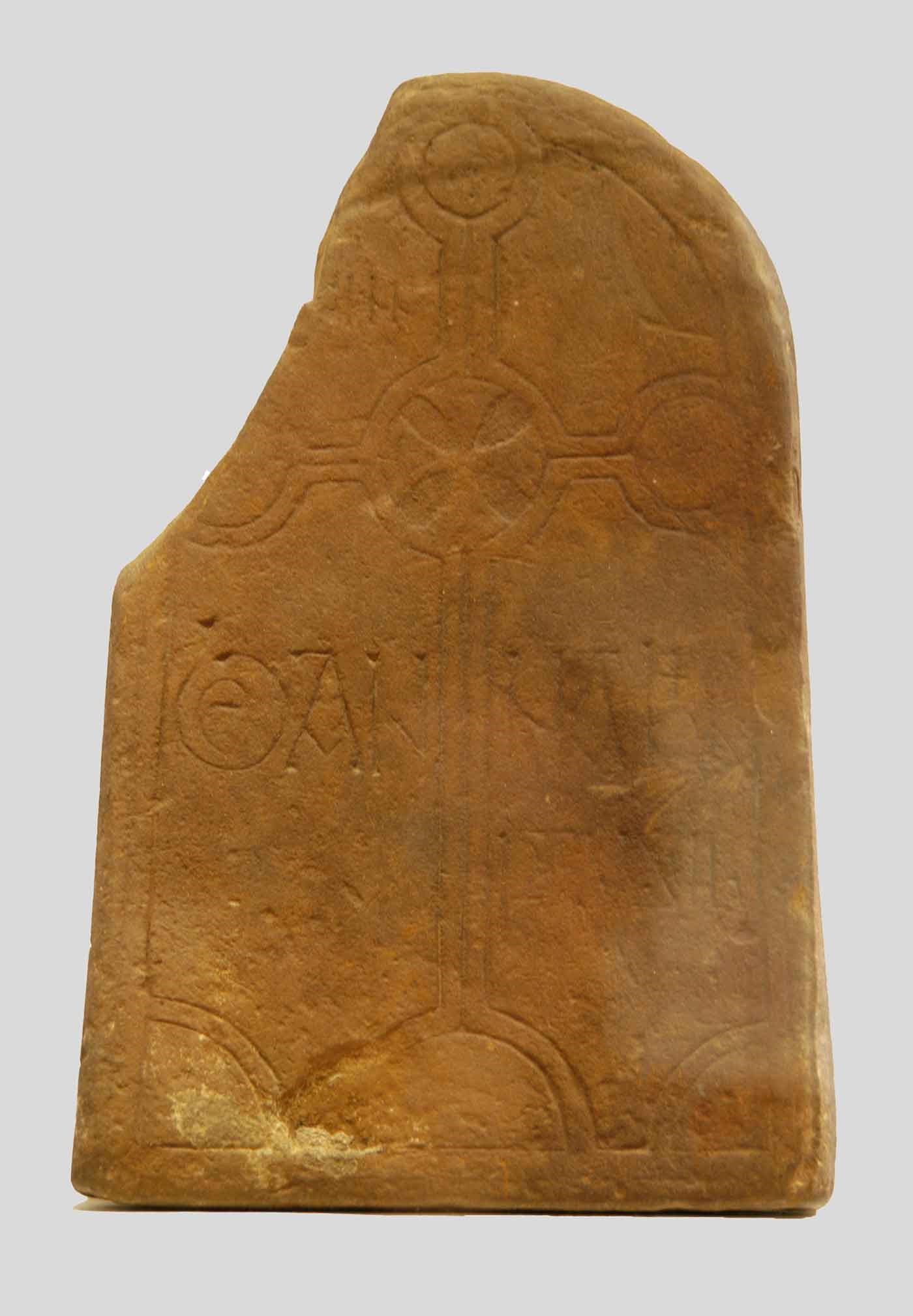 This fine sandstone mould for casting a metal mount or fitting is almost complete. The carved design is one quarter of a circular pattern. A second flat stone would have sealed the mould so that the molten metal could be poured in. The pattern is of scrolls and leaves. The mould's survival provides evidence that the medieval priory was a place not only of worship but also of work. 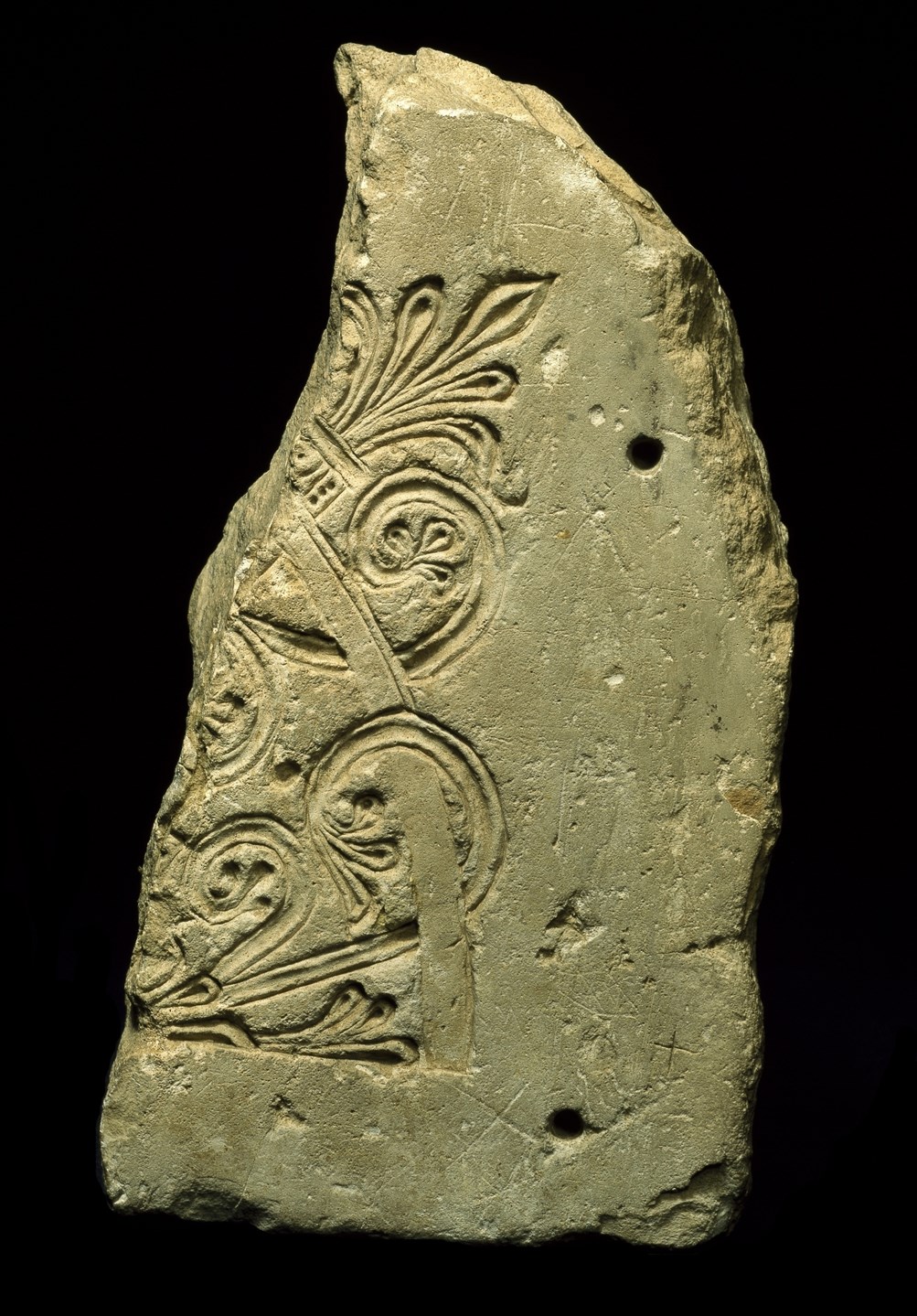 This Viking raider stone may commemorate the first Viking raid on the Anglo-Saxon monastery of Lindisfarne in AD 793. One face is carved with a sun, moon, two hands and two praying figures around a cross, which may refer to Doomsday - the Last Judgement, the end of the world. The other face has a procession of armed men bearing axes and swords. 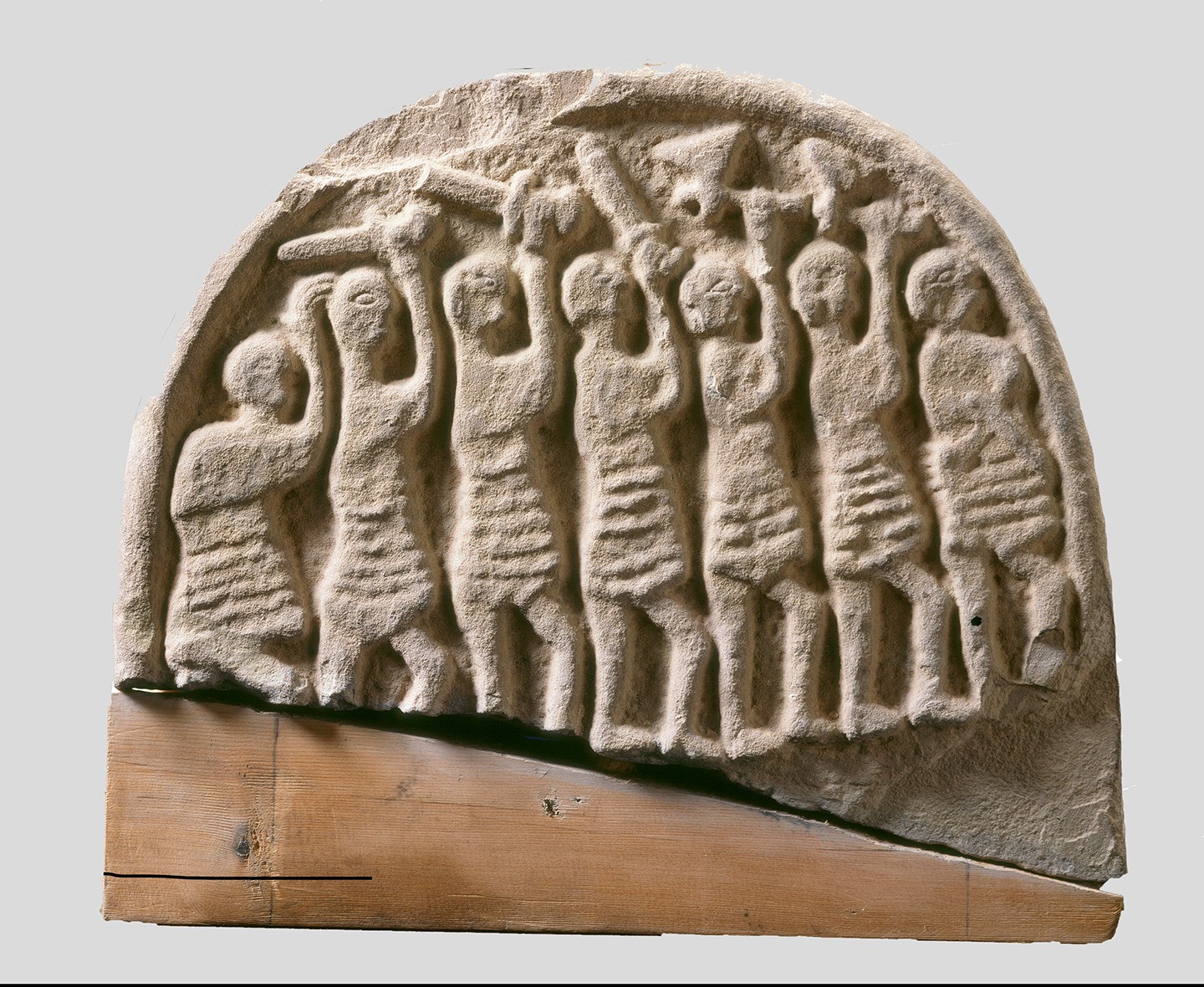 This elegant green-glazed jug was made at Scarborough in North Yorkshire. It is decorated with strips and pellets of clay to form rope patterns. Such a jug may have been used in the refectory to serve refreshments during a meal. 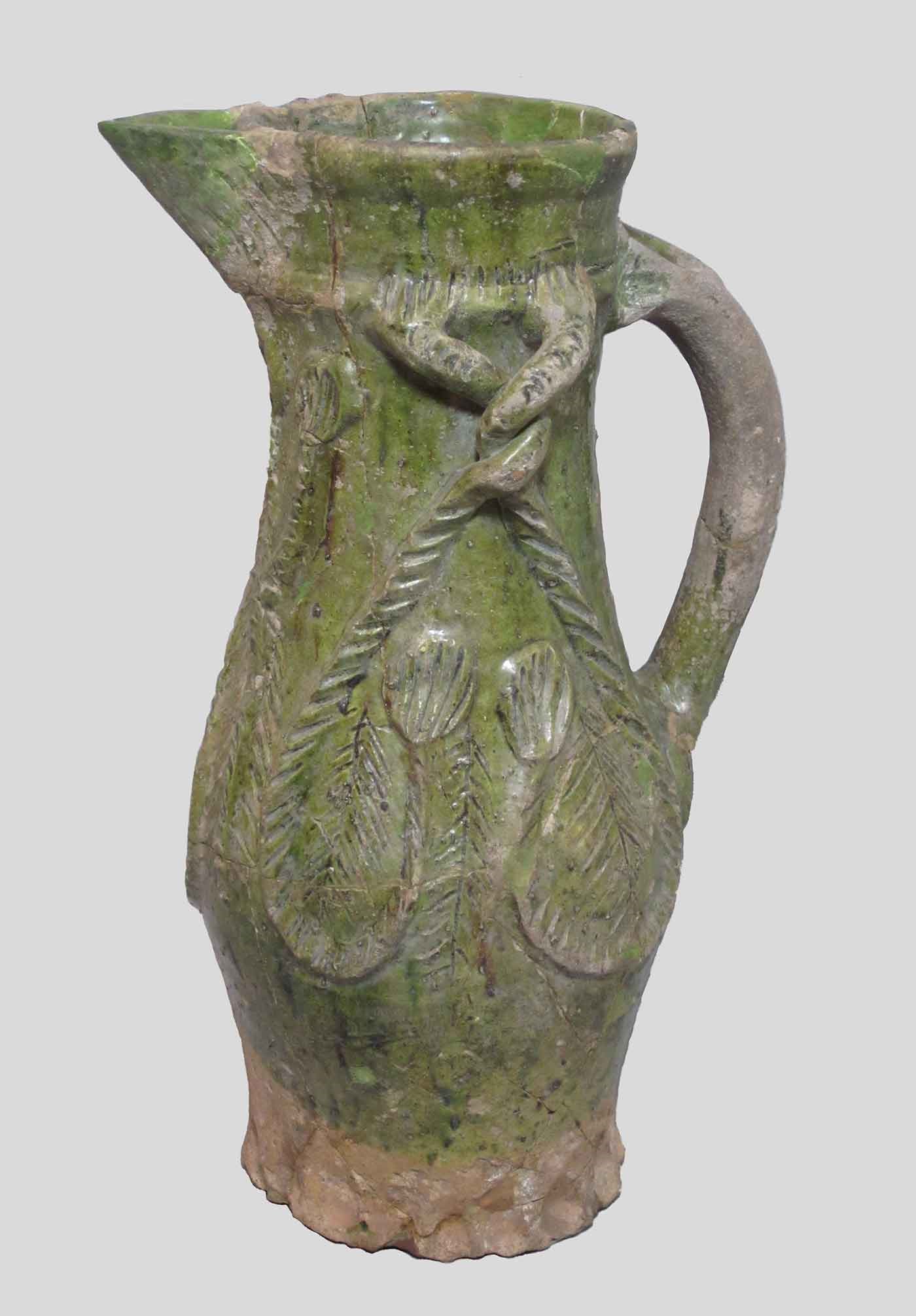 This copper alloy buckle is decorated with an animal head, with eyes made from blue glass beads. Although buckles are common archaeological finds, this particular type using glass for decoration is very rare. 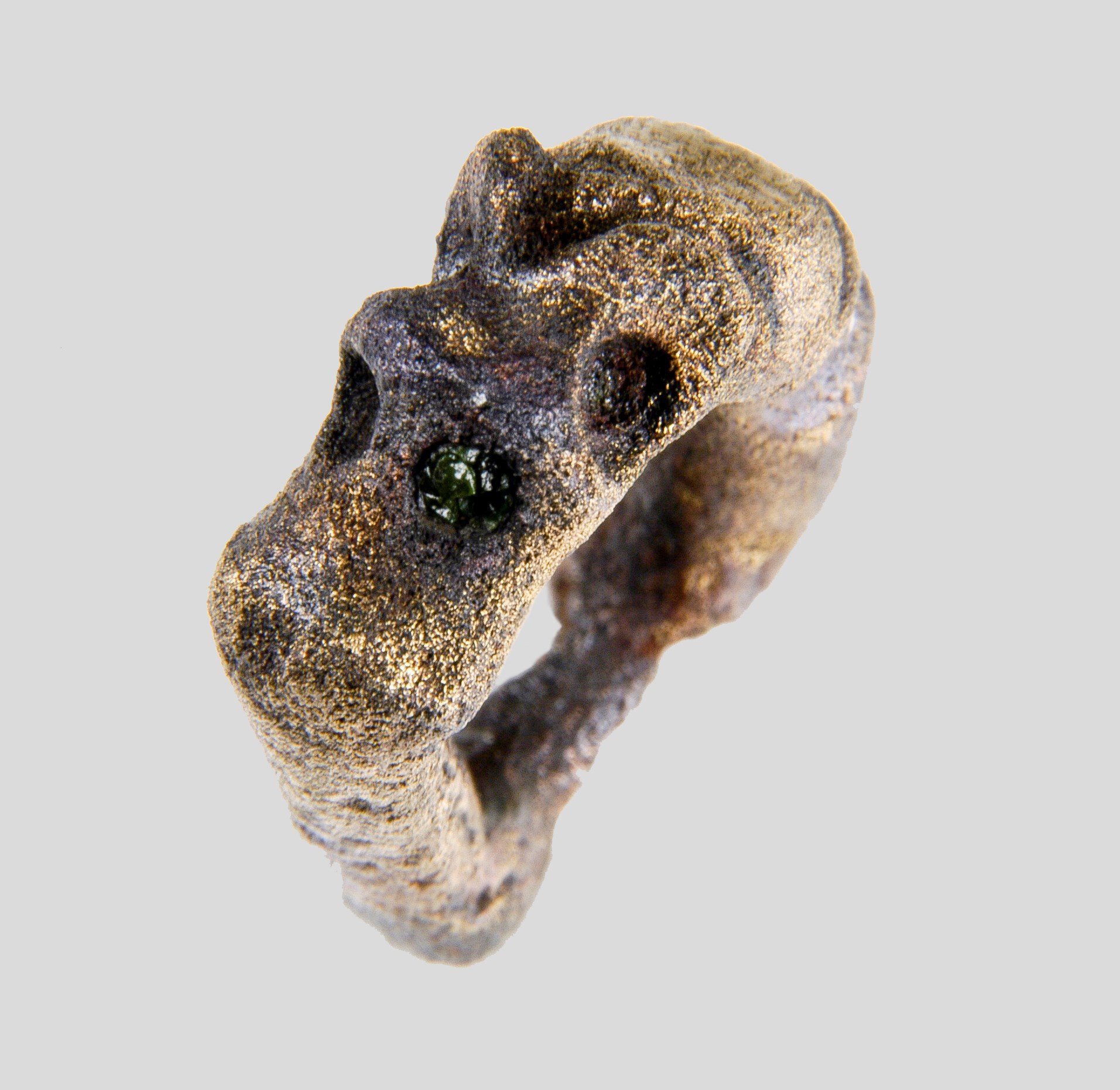 This section of a decorated stone cross-shaft holds two carved panels. The upper one has a central seated figure with a halo which may represent a seated Christ in Judgment. Above him are two figures, each holding a book and blowing a trumpet. Below are two seated figures, each with a horn or scroll. Crosses such as this may have been placed inside a church to commemorate the deceased or to mark a burial place. 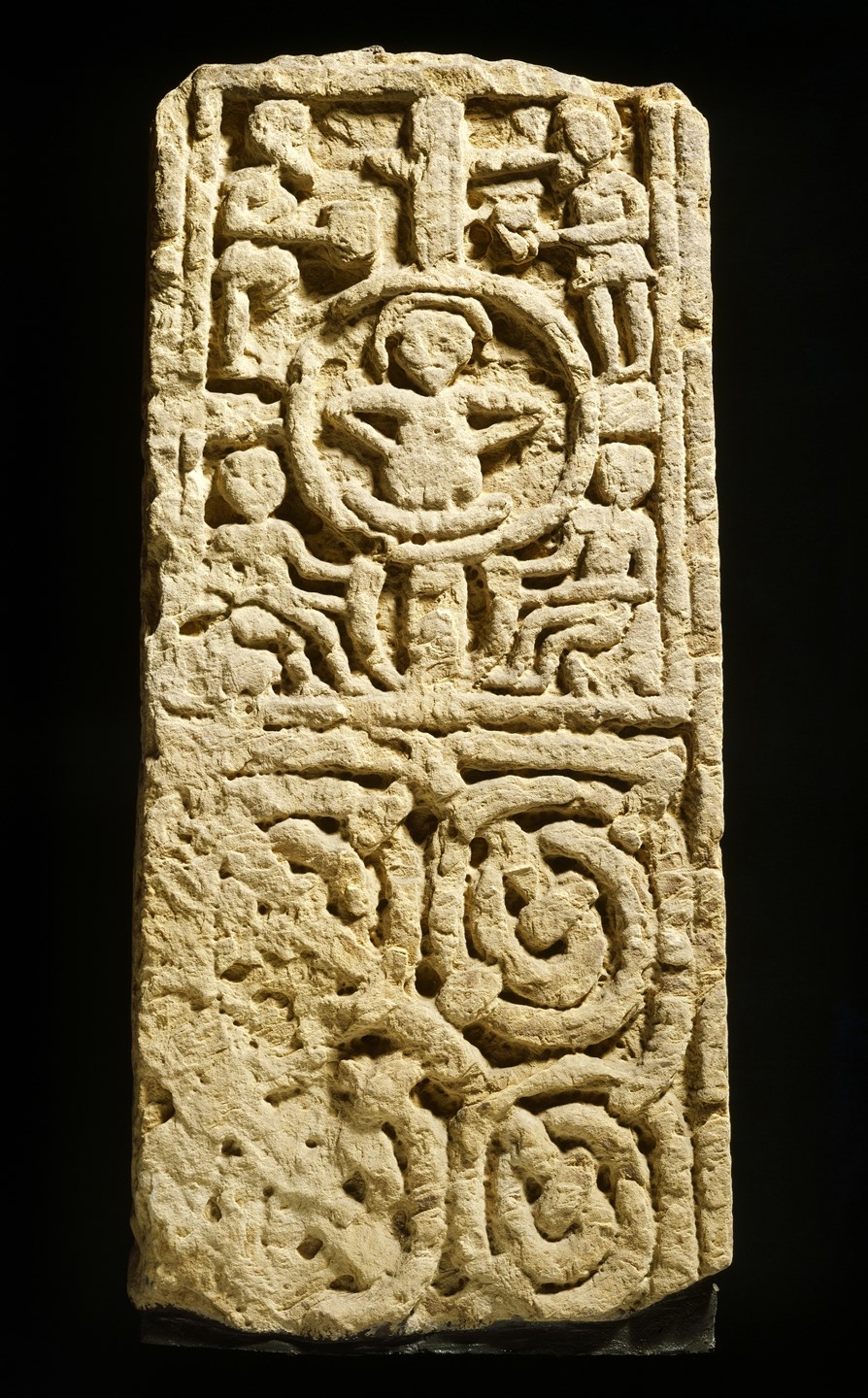 This stone gaming board is decorated with playing card symbols of hearts, clubs, diamonds and spades at each of the four corners, around a central, circular hollow. It may have been used by the soldiers or the officials who were stationed in the priory buildings in the 17th and 18th centuries. 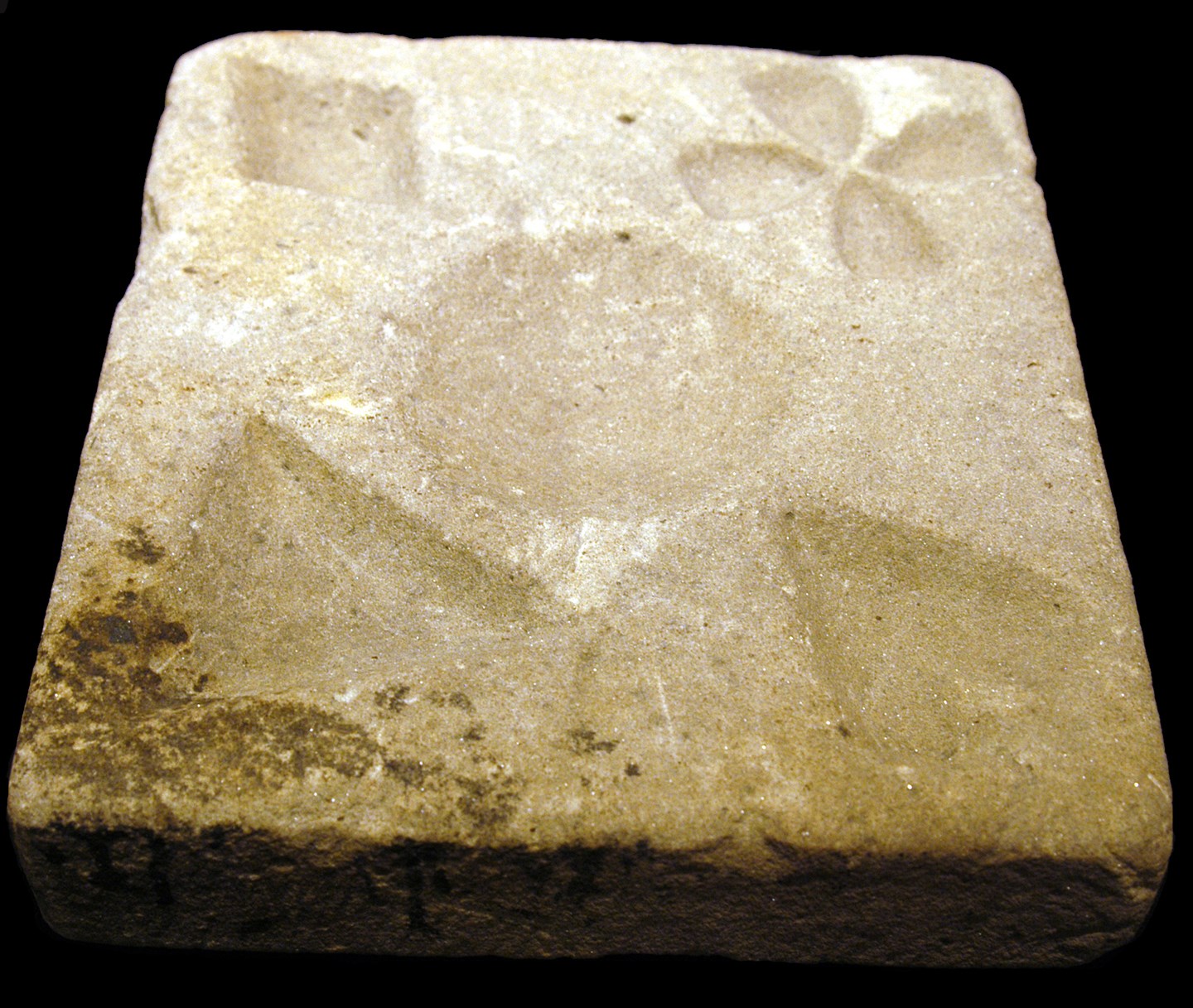 In Marmion Sir Walter Scott recorded a tradition that, on St Cuthbert's island at night, 'St Cuthbert sits and toils to frame the sea-born beads that bear his name'. These natural fossils were collected by pilgrims as souvenirs of a visit to Lindisfarne. They are nicknamed 'Cuddy's Beads' and are thought to represent the rosary beads of St Cuthbert. 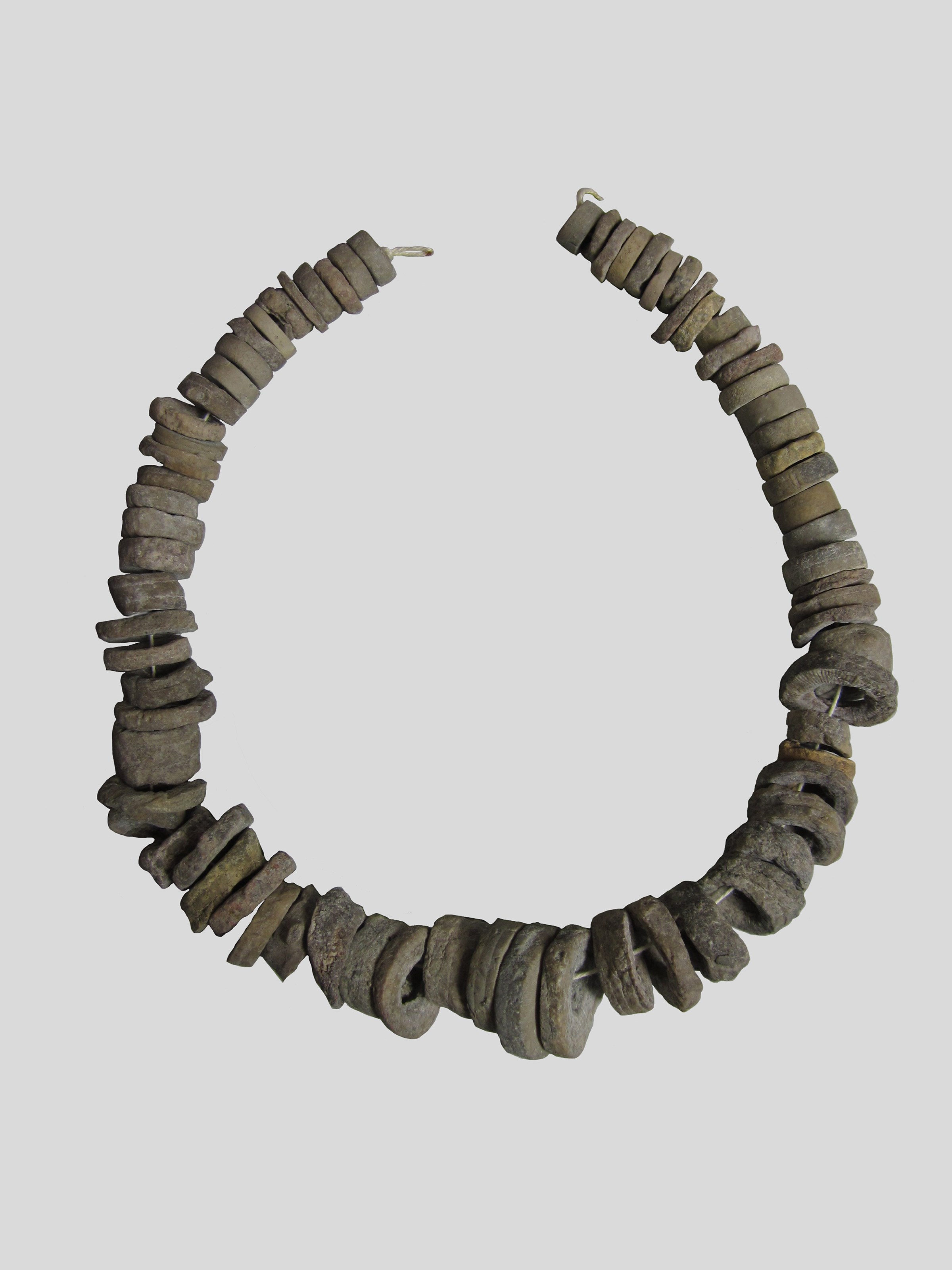 These remains of a fashioned knitted jerkin or jacket (possibly of Dutch or Flemish origin) represent some of the earliest known examples of knitting. The wool, now light sandy-brown, was perhaps originally white or natural-coloured. It is all 2-ply, S-spun and then Z-plyed so lightly that the two threads often lie side by side. The cloth is used and worn, and therefore may have been recycled, intended for use as gun wadding. 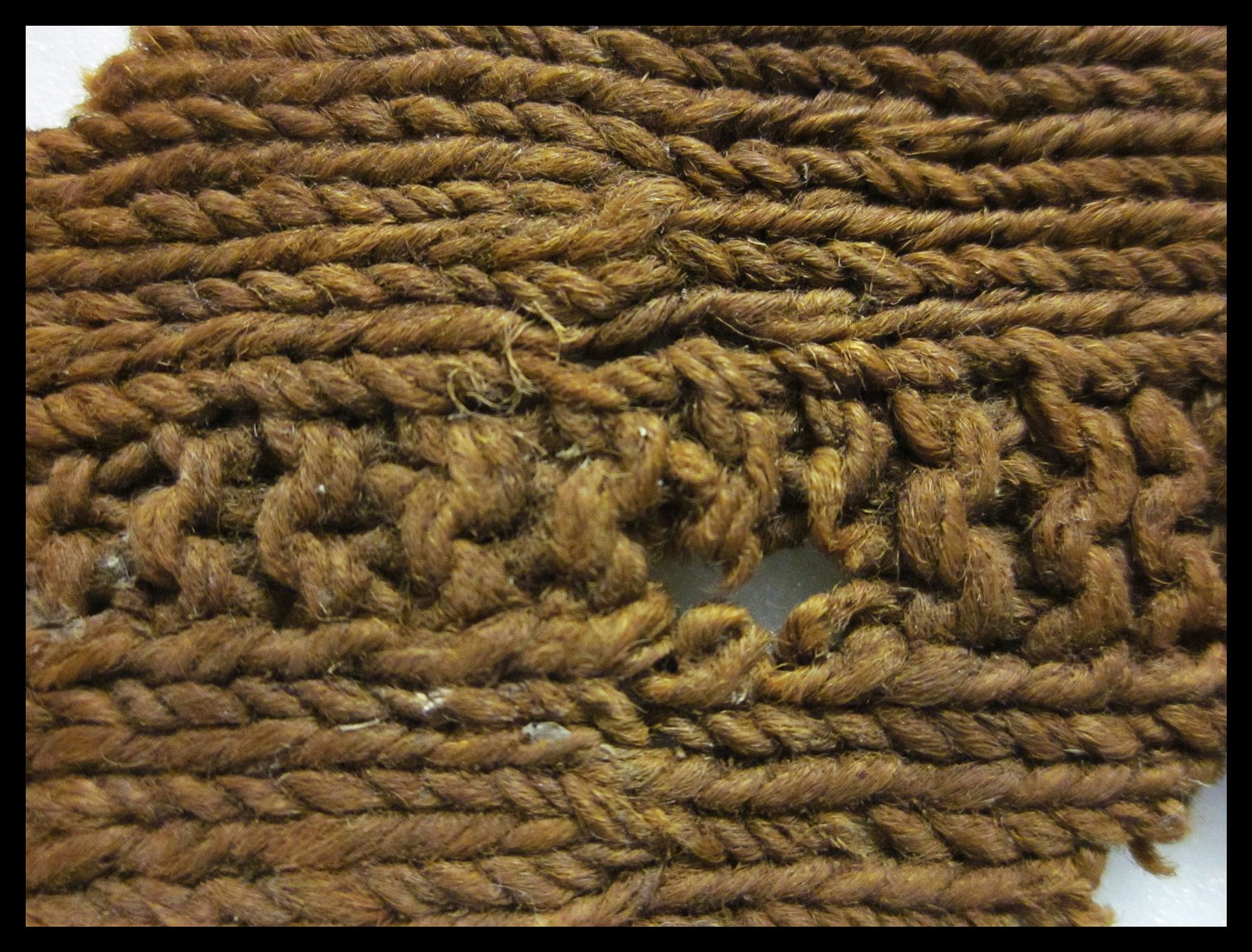