The daily life of a Carthusian

The life of a medieval Carthusian was very different from that of other monks. In a Carthusian priory, each monk lived alone in a substantial house, called a cell. Each cell was in effect a private monastery, with its own cloister for meditation and a walled garden. At Mount Grace Priory in North Yorkshire – the best-preserved Carthusian monastery in England – there were 25 of these cells.

The Carthusian way of life was strict, but the monks enjoyed a good standard of living. This allowed them to concentrate on their religious life, without worldly cares.

The purpose of Carthusian life was total withdrawal from the world to serve God by personal devotion and privation. While other monks lived communally, Carthusians rarely met one another, passing the long day in the isolation of their cells and surfacing only occasionally.

The monks’ lives were ordered by a strict timetable. They followed the same daily round of eight offices (or prayers) as monks of other religious orders. But uniquely, they only celebrated the night offices and the afternoon office of Vespers together regularly in the church, and Mass less frequently. Otherwise they said their offices and celebrated Mass alone in their cells.

Only on Sundays and feast days was the monastic day different. On these days, the monks dined together, met to discuss business and discipline, and celebrated all offices in the church.

Read more about the Carthusian order
A reconstruction drawing of Mount Grace Priory, showing the monks’ cells laid out around the great cloister in the foreground, with the church beyond
© Historic England (illustration by Dominic Andrews)

The monks’ hermitic lives account for the unique planning of Carthusian monasteries, or charterhouses. The layout of cells around a great cloister is recorded at the first charterhouse, the Grande Chartreuse in France, and remains unchanged today.

The cells were essentially private monasteries, and they, rather than the church, were the centre of religious life, where the monks spent most of their time, praying, meditating and working.

Documents and the evidence of excavation at Mount Grace Priory show what ‘trades’ the monks followed. One, Sir Thomas Goldwynne, was a weaver, and came from London with his loom and household goods in 1519. Other monks, from the evidence of pens and oyster shells full of coloured pigments, copied and illuminated manuscripts. One was a bookbinder, with tools and book fittings.

Carthusian monks ate together in their refectory (dining room) only on Sundays, feast days and days when monks were buried. They ate their main meal mid-morning, with a second light meal after Vespers. Normally, the lay brothers (domestic servants to the monks) brought food and drink to the monks’ cells, passing them through the hatch beside the door.

The monks fasted regularly and often drank water, which was supplied to each cell by a tap. Good drains and clean drinking water were central to the lives of Carthusians, who, unlike monks of other orders, drank water as well as beer.

In their cells, the monks had all they needed for eating and drinking, including two spoons, two pots, a jug, a bread knife and a salt cellar.

The Carthusians never ate meat. Excavation of the monastic kitchen at Mount Grace has shown that monks ate mostly fish, pulses and eggs, although they could grow vegetables in their gardens.

The monks’ guests were served meat, which was cooked in a separate kitchen, beside the guest house. 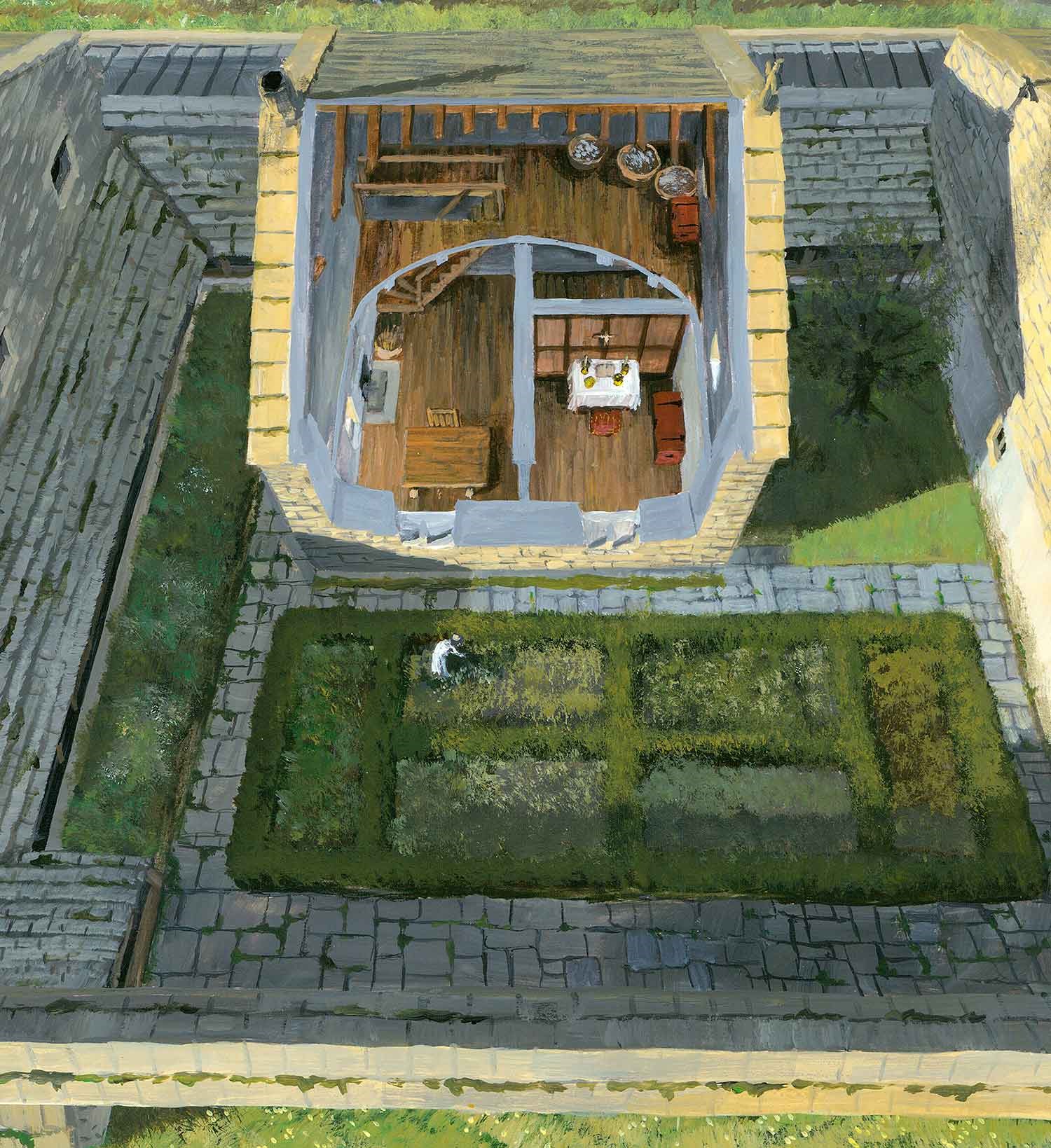 Inside a monk’s cell

Although there were some variations, most of the 25 cells at Mount Grace follow a common pattern, as shown in this reconstruction drawing.

There were three rooms on the ground floor – a living room, a study, and a bedroom combined with an oratory (a private chapel). Upstairs, there was a work room. Meals were passed to the monk through a hatch beside the entrance door from the cloister.

Between the cell and the garden was a short corridor that served as a private cloister where the monk could read and meditate. A second corridor led to the latrine, which was set in the garden wall away from the cell. In one of the corridors was a tap for drinking water.

High walls enclosed a private garden where the monk could perform manual labour and grow food. The garden also provided a spiritual metaphor for Paradise. Several of the gardens at Mount Grace have been excavated and details of their planting recovered.

The lives of the lay brothers

The lay brothers in a charterhouse were essentially servants subject to monastic discipline. They did the manual work of the monastery, leaving the choir monks free to pray, meditate and study.

At Mount Grace the lay brothers were originally housed in a separate but adjacent monastery. By the late 15th century, however, they lived in the same complex as the monks and obeyed the same rules. They were the cooks, bakers, brewers, gatekeepers and cleaners of the monastery, and its contact with the outside world and the estate. They were the responsibility of the most senior monk after the prior, the procurator, who also managed the priory’s estates and guests.

Some of the lay brothers may have come from gentry families. In the 12th century some bishops retired to become Carthusian lay brothers, showing that it was an honourable calling. Supporting the choir monks was itself a way of serving God.