Scarborough Castle has collections spanning from prehistory to the 20th century.

Many discoveries about the history and archaeology of the site were made during military works from the 18th century to the 20th, as the site was used as a military base, training camp and observation post.

The first formal excavations took place on the site of the Roman signal station during the 1920s and were carried out by FG Simpson. Many of those finds are held by Scarborough Museums Trust. The Trust has also acquired the excavation archive notes taken by Simpson and his daughter Grace. Further clearance and excavations were overseen by the Ministry of Works and its successors following state guardianship of the site.

The British Museum holds a Bronze Age sword and pottery discovered in a pit in 1980 by the south-west wall of the medieval King’s Hall (replicas are on display on site), as well as an example of the Civil War siege coinage.

This crude, bearded face is part of a decorative rim from a tall jug. The beard that sticks out from the jug and the thin arms accompanying the face would have been applied to the jug on either side. The jug is a form of pottery known as Scarborough ware. 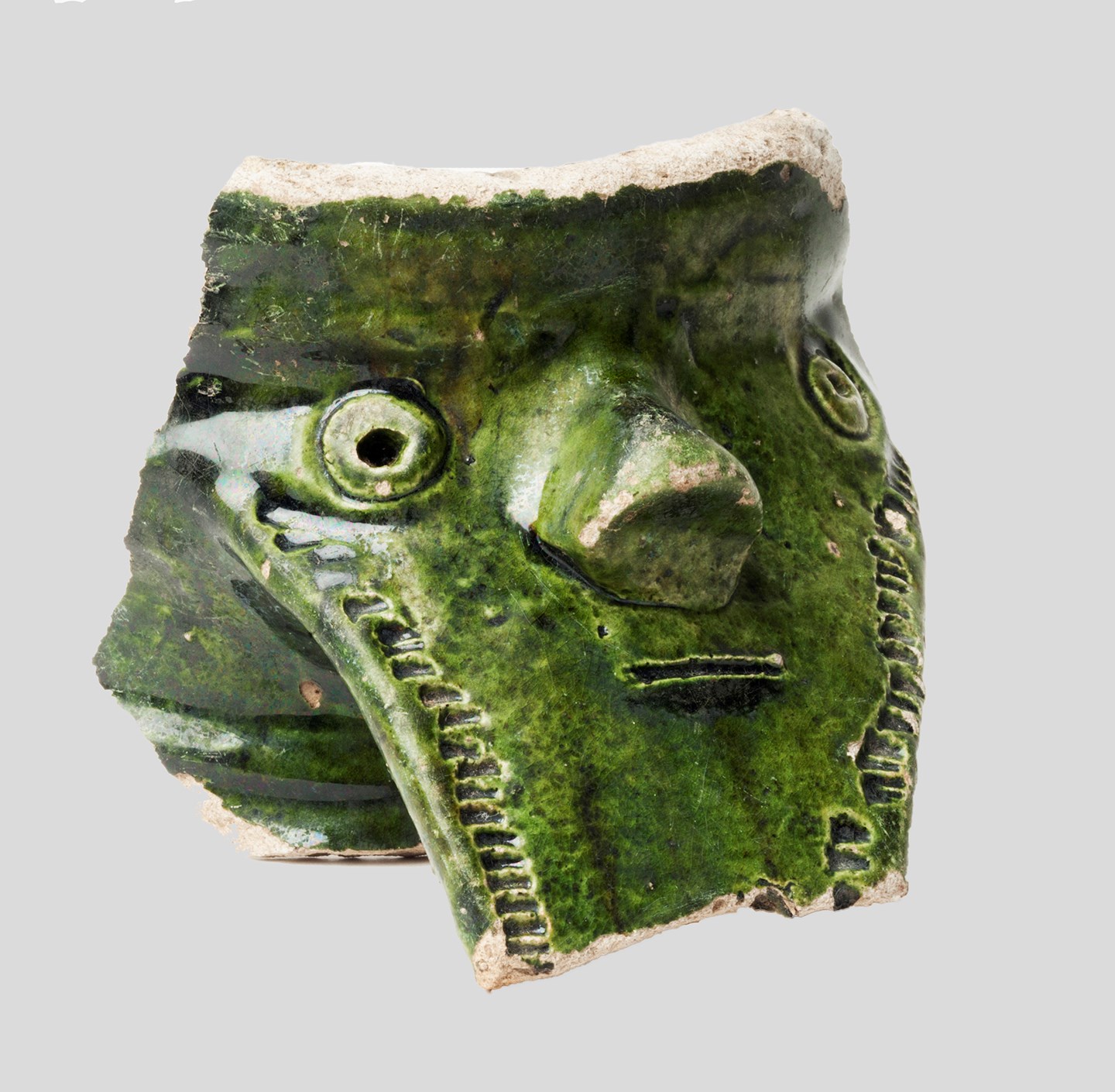 This pewter chalice was found in a grave in the medieval Chapel of Our Lady. Its presence indicates that the grave was that of a priest. 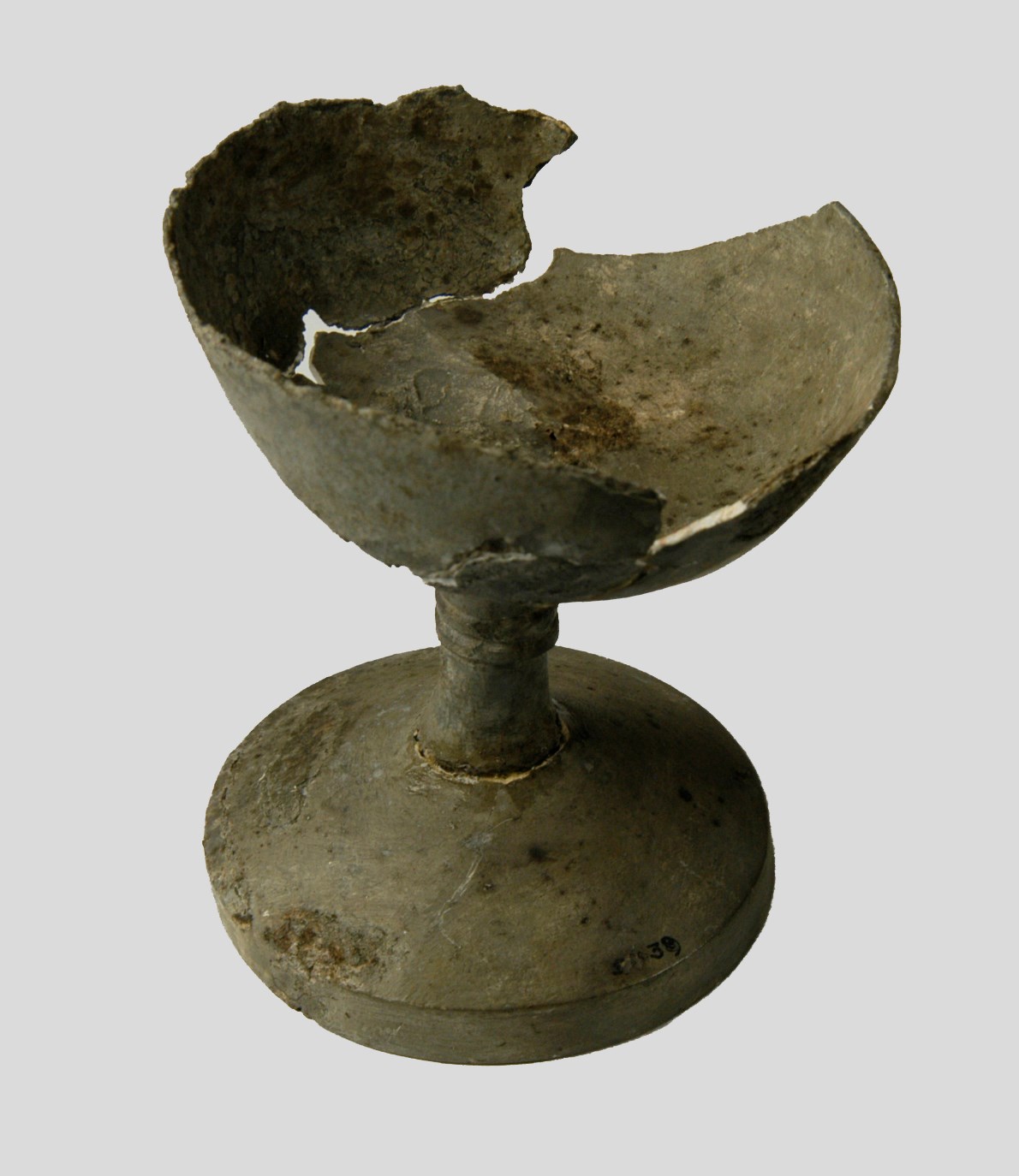 This section of a large cross-shaft is socketed at the top and base to connect to further sections. It is decorated with the crucified Christ, the Virgin Mary and St John the Evangelist standing at the foot of the cross. On the narrow sides are single figures of a bishop or abbot and a seated figure. The cross was intended to be viewed from all sides and may originally have been painted. 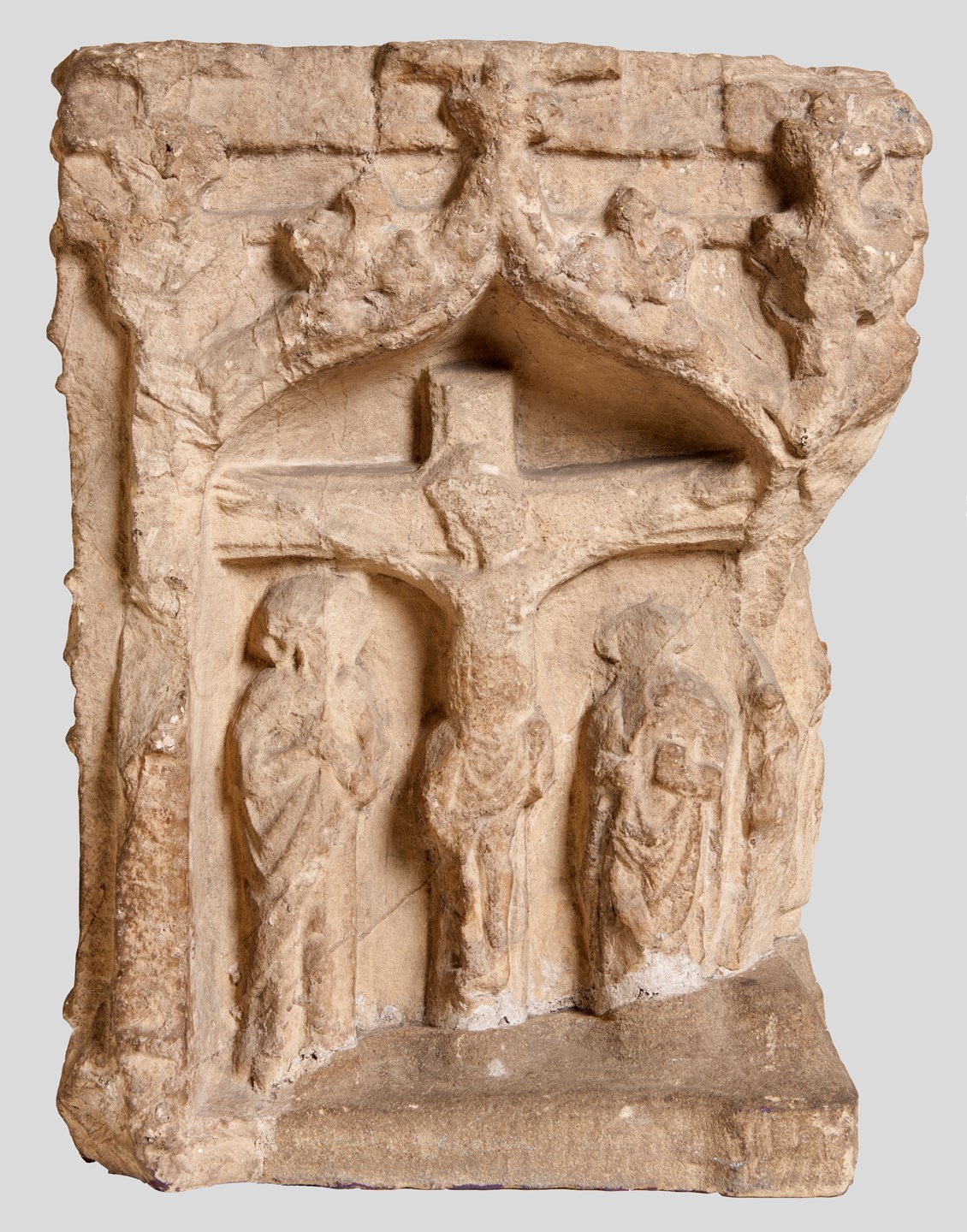 A quantity of tobacco pipes were found during excavations on the headland. Their date range matches the period of military use of the site throughout the 17th, 18th and 19th centuries. 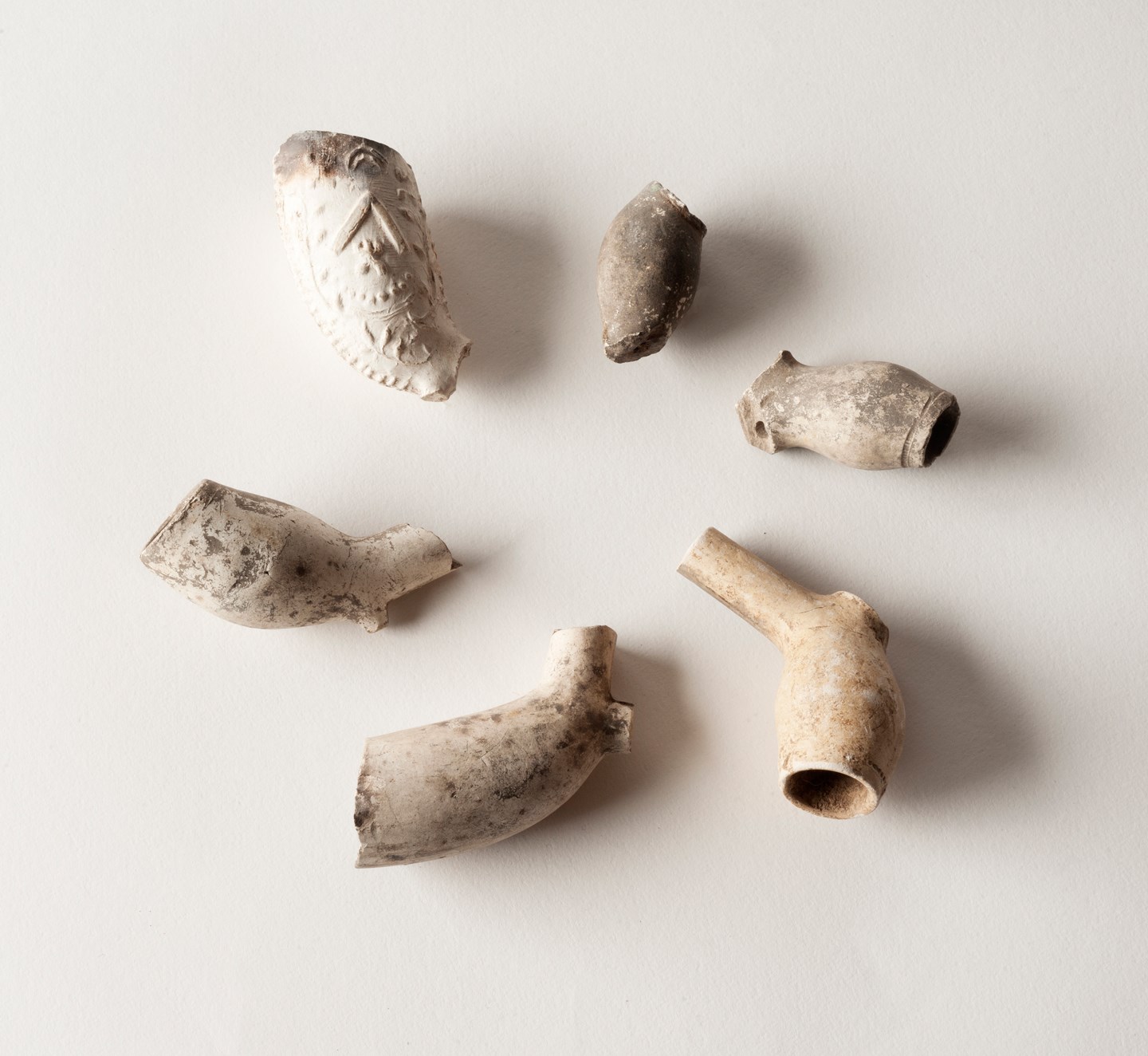 These beads include glass beads from a necklace and a large melon bead, which was possibly used on a horse harness. 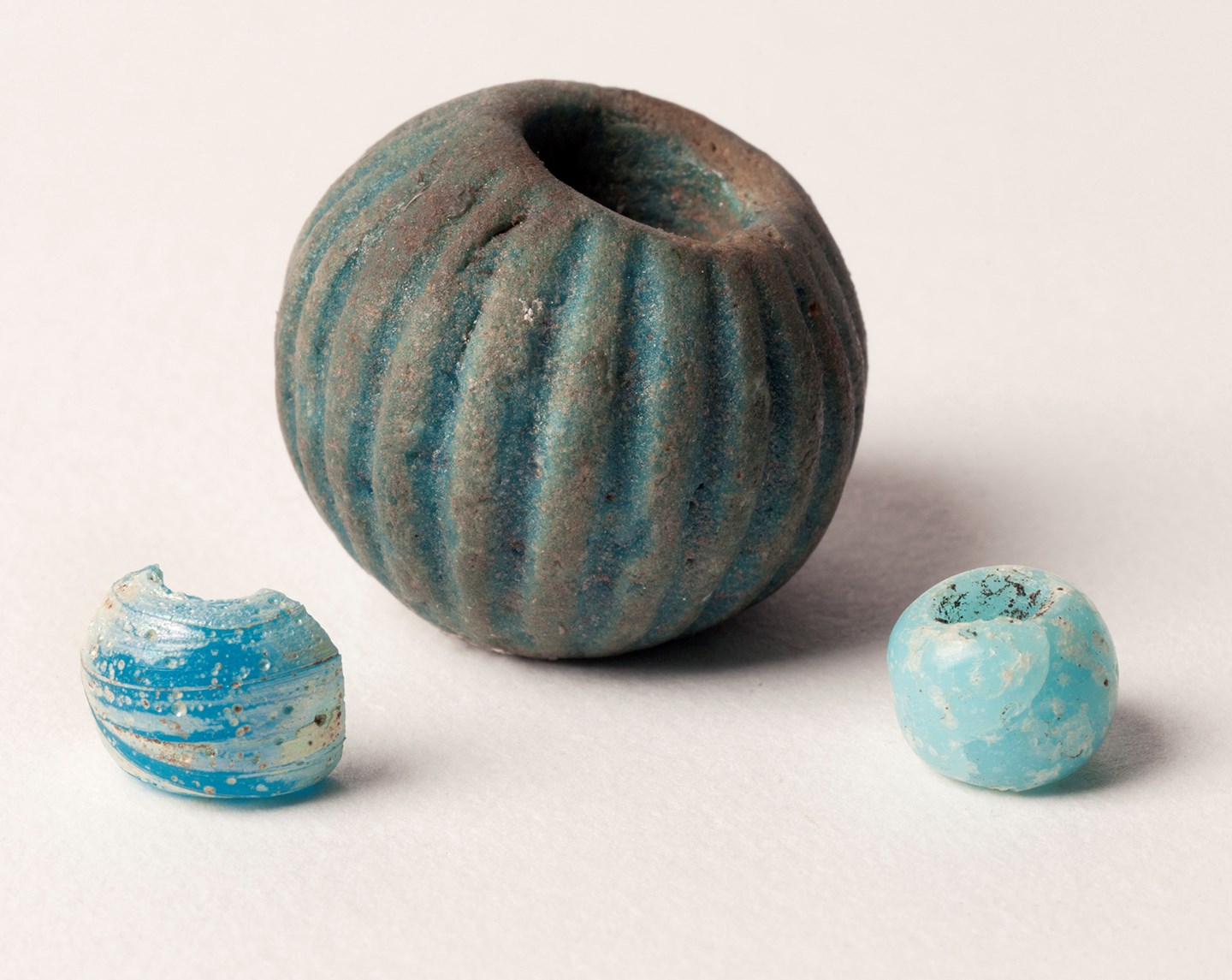 This axe-head is made from green slate and has been polished and shaped to form a sharp cutting edge. In experienced hands it could cut down a small tree in minutes. 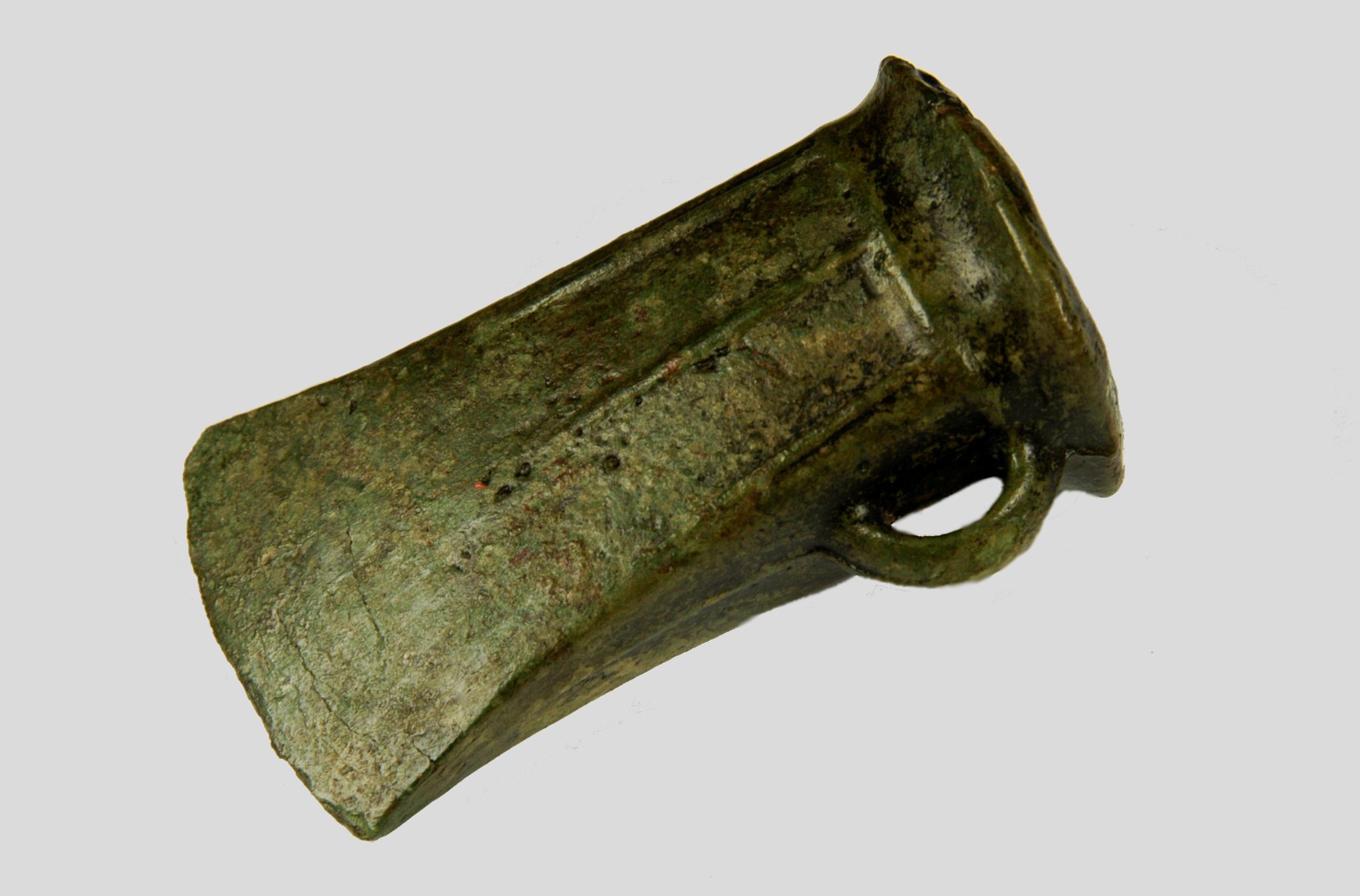 Only the upper part of this large, green-glazed Scarborough-ware jug remains. It is decorated around the neck, rim and spout with knights carrying triangular shields and riding on horseback. The kiln site of this pottery was just outside the castle gates. 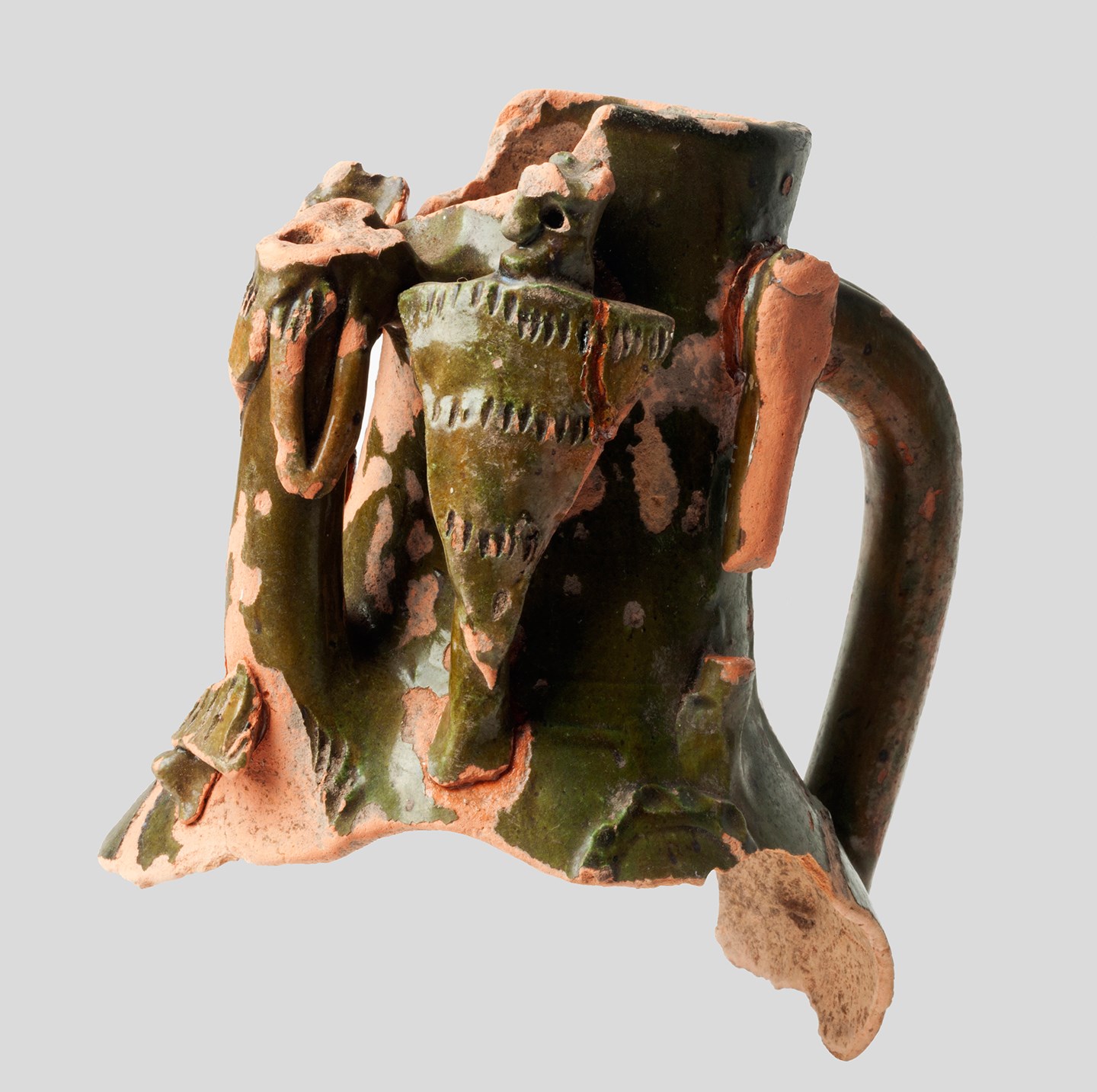 This ribbed Yorkshire axe-head was used as a general-purpose tool. It is cast with a socket to receive a handle. The loop was used to tie a leather or twine thong to the handle to reinforce it. The ribbed surface was not only decorative but also strengthened the head. This axe and other items of Bronze Age metalwork were found in pits on the headland. 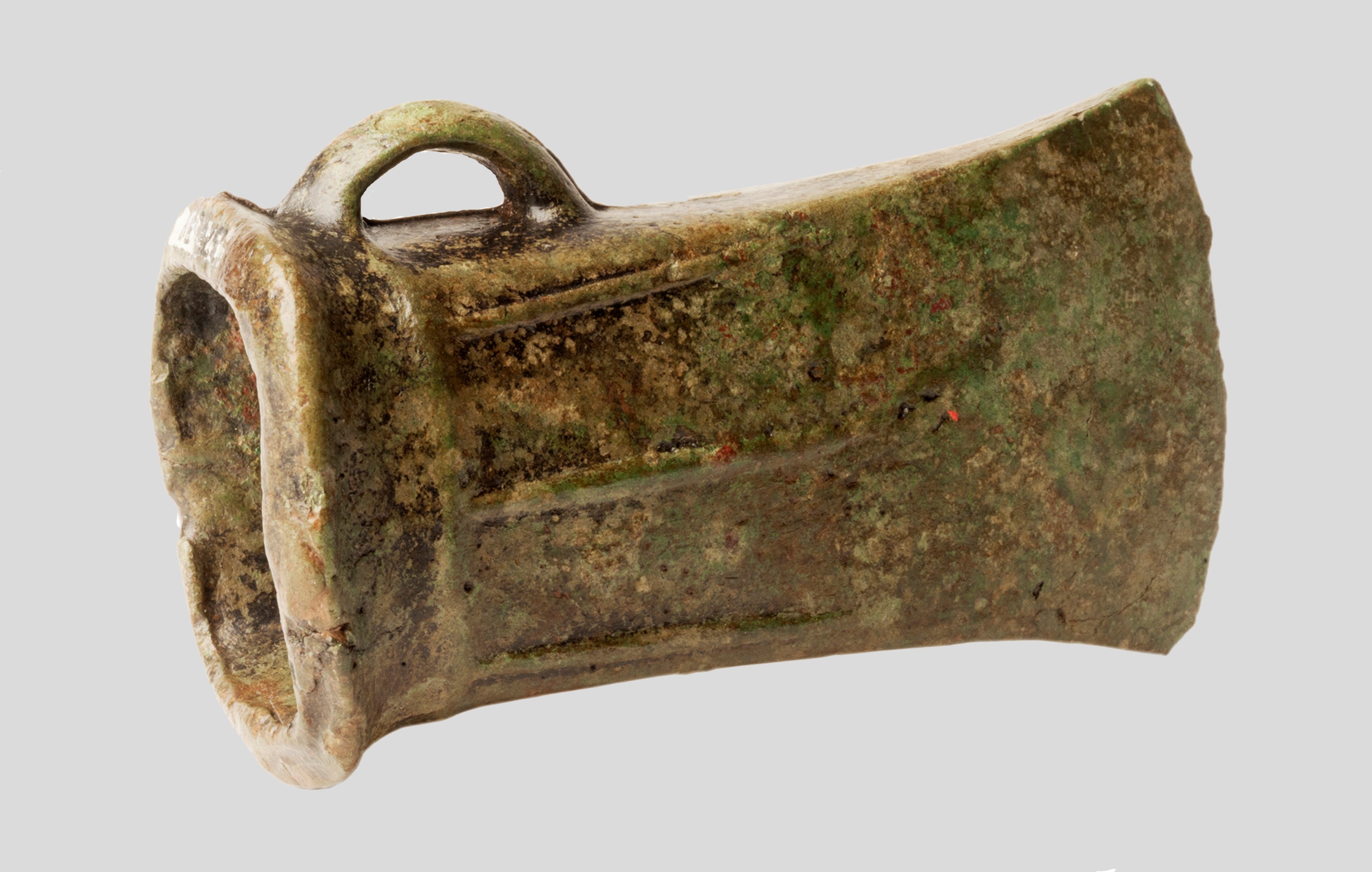 A range of Roman pottery vessels dating from the late 4th century AD, when the Roman signal station was in use, was found on the site of the signal station. These pots were carefully reconstructed in the 1920s using the surviving fragments. Very few complete pots were recovered. 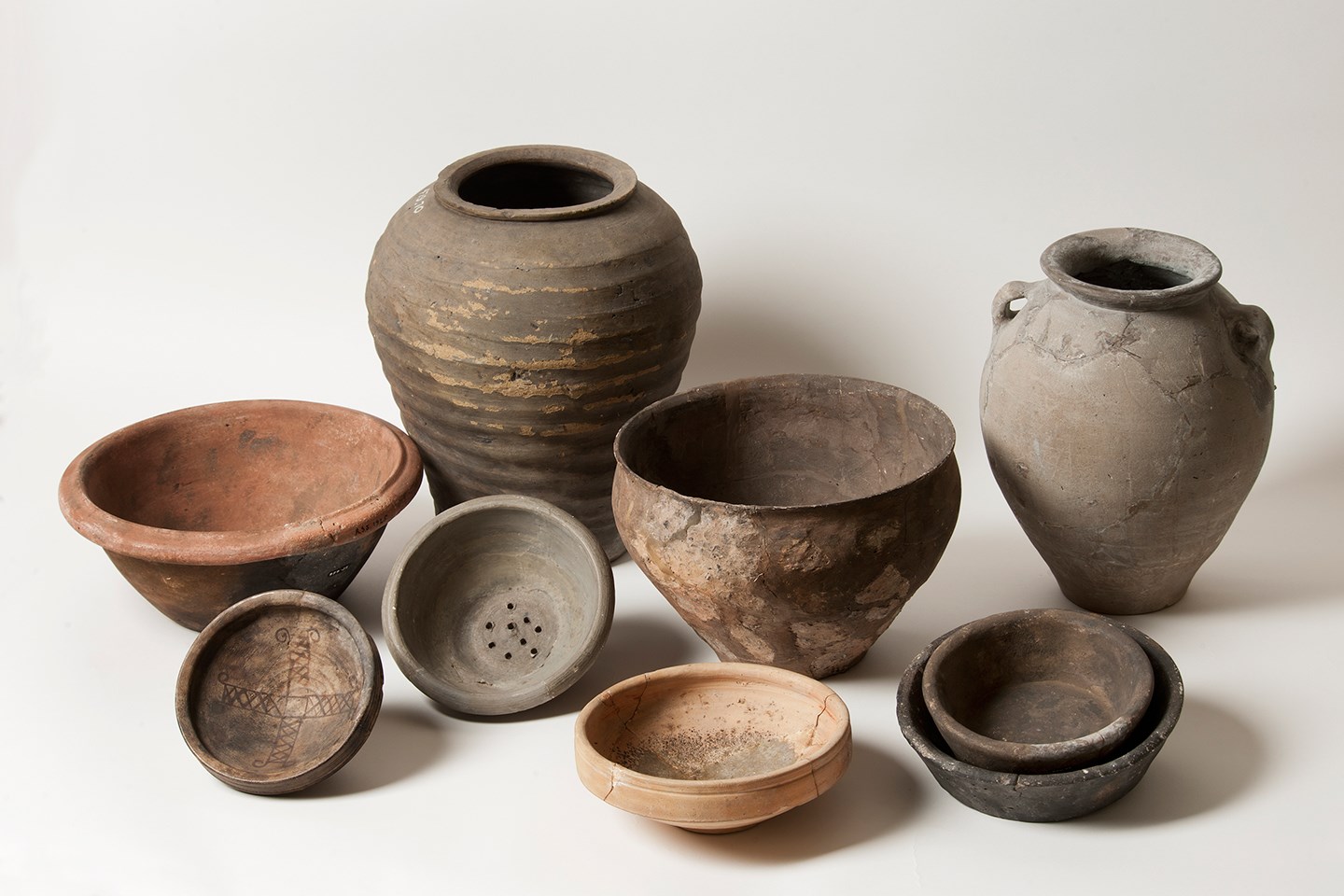 This cross pendant is made from jet, locally sourced from Whitby. It is beautifully made and has been inlaid with silver. The upper arm has a hole through it, so that it could be suspended on a necklace. It is one of two excavated from Scarborough Castle. This example was found in the graveyard of the medieval Chapel of Our Lady. 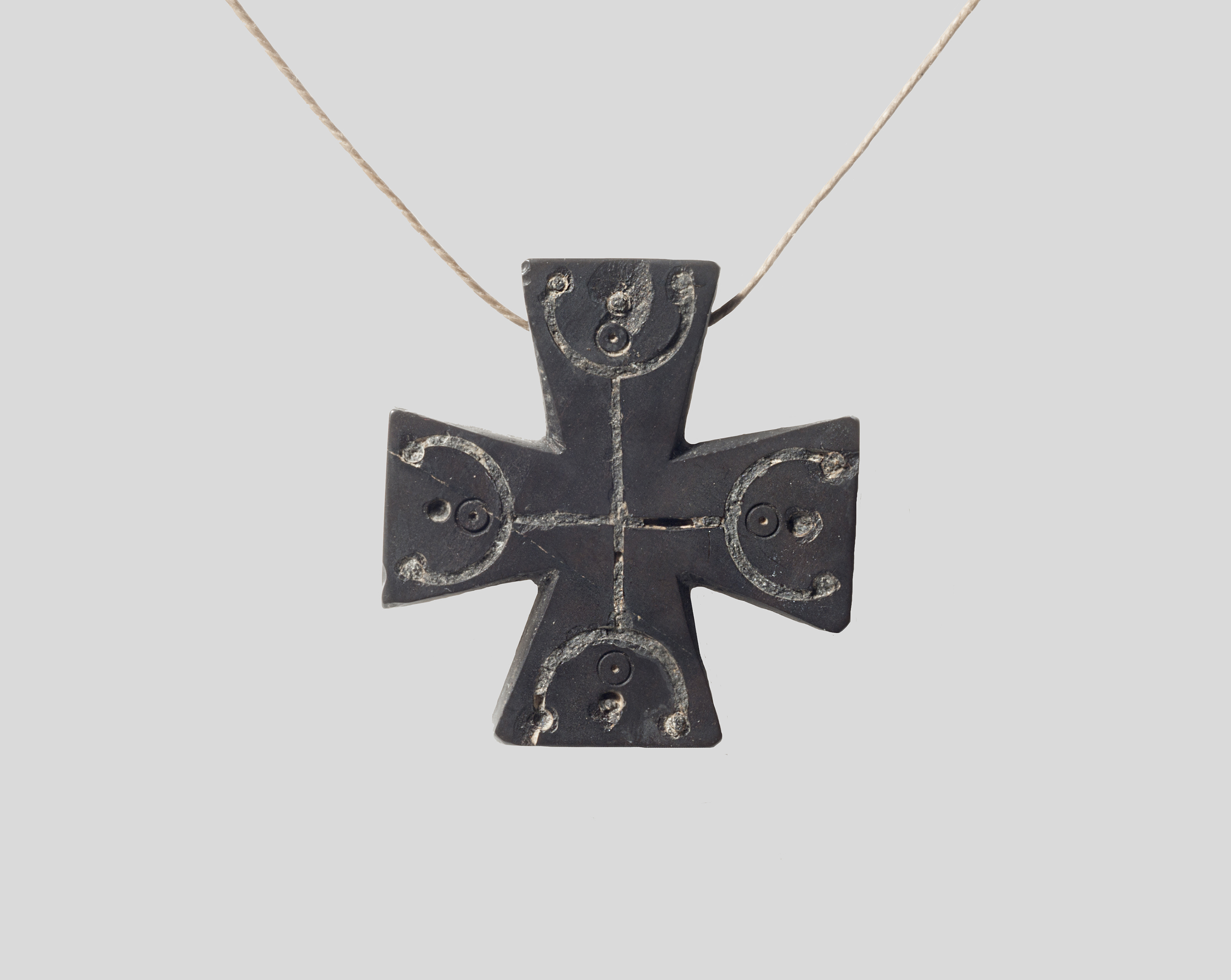