The tiny church of St Mary at Kempley, Gloucestershire, was probably built in the early 12th century by Baron Hugh de Lacy, owner of Kempley manor. Its exterior is unassuming, but inside, this simple Norman building is adorned with the most outstandingly complete and well-preserved medieval wall paintings in England. Those in the chancel, dating from the early 12th century, are particularly rare, and are the most complete set of Romanesque paintings in northern Europe. They are a vivid reminder of a time when church interiors were covered in such decoration.

St Mary’s also has some exceptionally ancient timbers, including the oldest timber roof of any building in England.

The church of St Mary, Kempley

Built around 1130, this tiny church is an extraordinary survival from the Norman world. Its exceptional decoration is owed to the patronage of one of the wealthiest early Norman families in England, the de Lacys.

Walter de Lacy had fought with William the Conqueror at the battle of Hastings and owned large stretches of the Welsh marches. Kempley was in de Lacy hands in the late 11th and 12th centuries. After Walter died in 1085 his body was taken from Hereford to Gloucester for burial, and may have rested briefly at Kempley. His son Hugh may have built St Mary’s to commemorate this.

St Mary’s probably replaced an earlier Saxon church on this site, and retains a simple ‘Saxon’ layout, with a rectangular chancel and an aisleless nave. The tower, blocking the church’s west entrance, was added in about 1276 during Edward I’s wars in Wales. The timber-framed porch dates to the 14th century.

The surround of this chancel window is decorated with a chequerboard pattern, which draws the eye to the narrow opening. The walled city above the window is a representation of the gates of Jerusalem

Medieval church paintings were used to educate and inspire a congregation who may not have understood the Latin church services. They taught a Christian understanding of the world, offered moral guidance, and aroused the emotions. The artists at St Mary’s used the nave – the main body of the church – to depict more earthly subjects, while the chancel (the east end, where the altar stood) was conceived as Heaven, and shows a vision of Christ at the Apocalypse.

The first artists at St Mary’s were working in the newly built church, around 1130. They painted onto fresh lime plaster (fresco technique) and added other details when the plaster was dry (secco technique). They also painted directly onto the stonework.

Other painting schemes were added in the late 14th and 15th centuries. Later, with the hostility to religious art during the Reformation, the paintings were hidden behind whitewash. They were only rediscovered in 1872.

Scroll through the images below to see scenes from the wall paintings.

Help us conserve these wall paintings 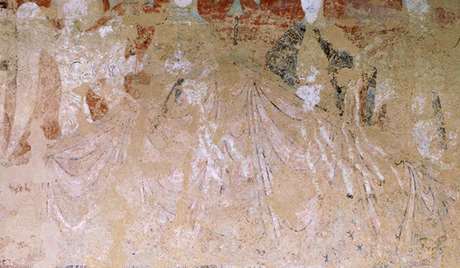 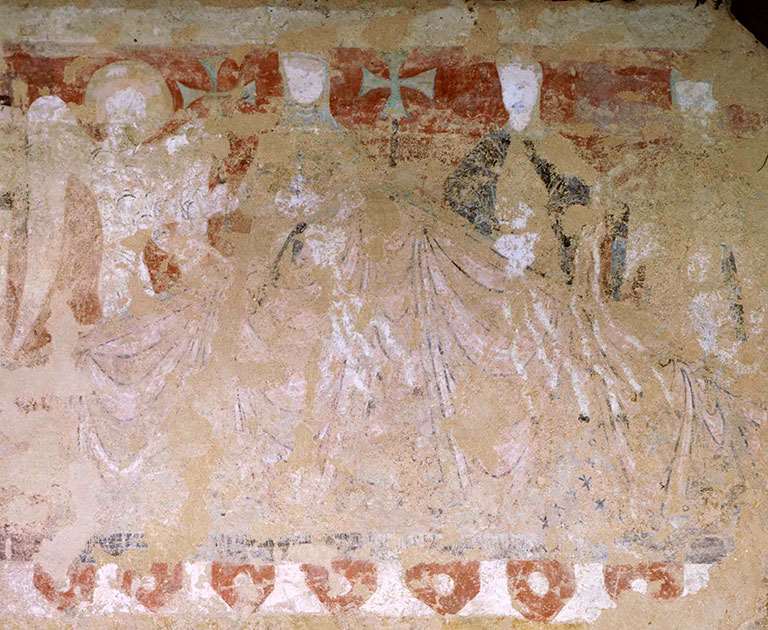 This scene shows the three Marys visiting Christ’s empty tomb. At Easter time, clerics performed the roles of the angel, on the left, and the three Marys to the right. The angel draws back a white cloth, which is draped over a wooden ‘sepulchre,’ to show that Christ has risen from the dead. 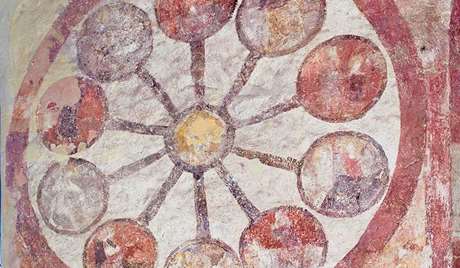 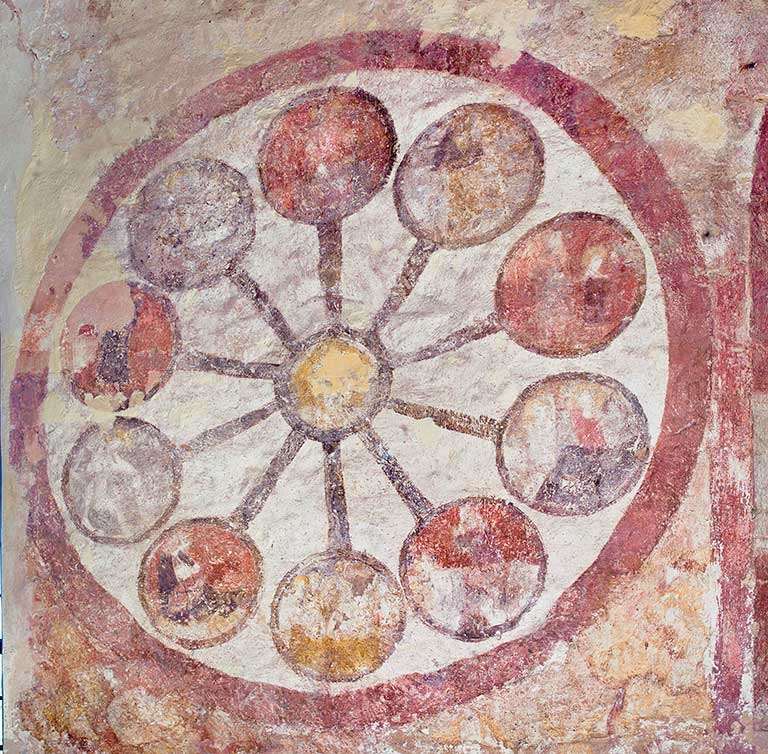 The wheel of life represents the ten ages of man. The painting shows (clockwise from bottom left): a woman seated with a child, a boy, a youth, a young man on a white horse, a king on his throne, an elderly man, a blind old man guided by a boy, an old man in bed, a coffin and a tomb. 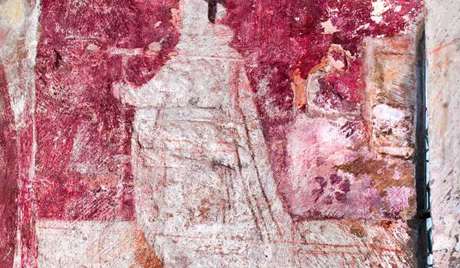 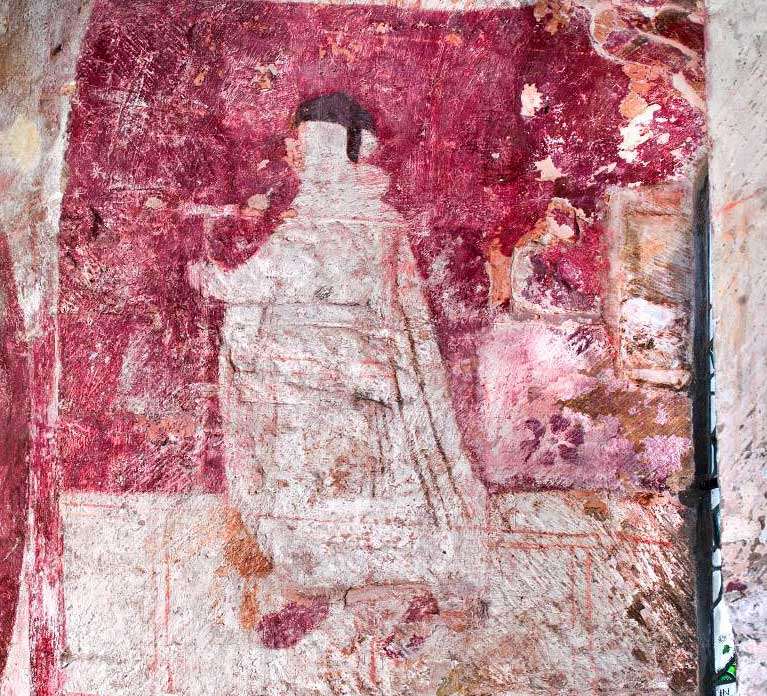 St Anthony was a monk who lived in the desert of Egypt in the late third or fourth century, and advocated a life of hard work and self-discipline. He is shown holding a book in his left hand and a staff in his right. 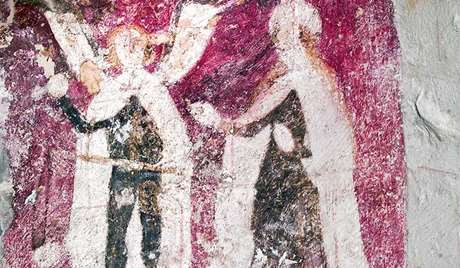 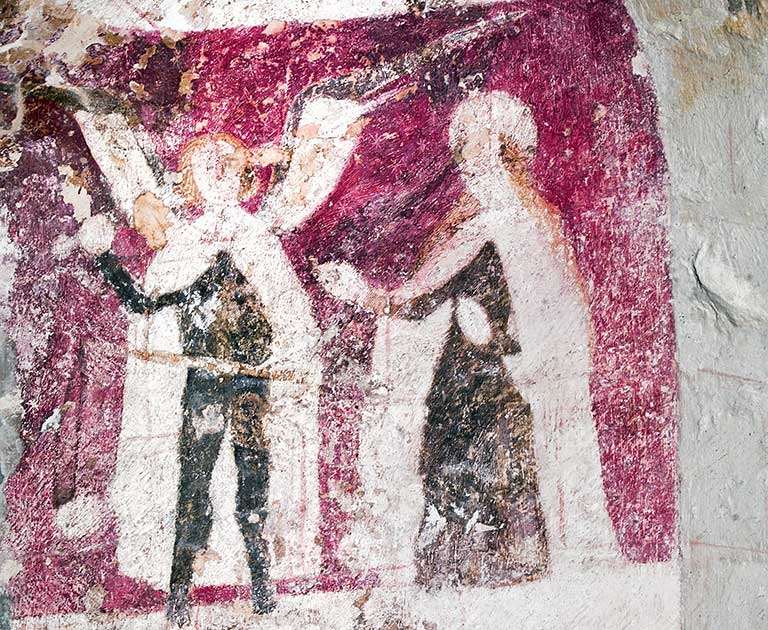 This painting shows the archangel St Michael on Judgement Day. He holds a pair of scales in which souls are weighed against their sins, and a sword with which to defeat Satan. Next to him is the Virgin Mary, who holds out her hand to intervene on behalf of a soul. 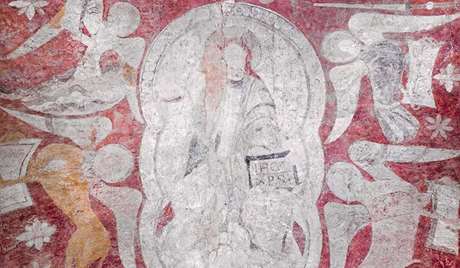 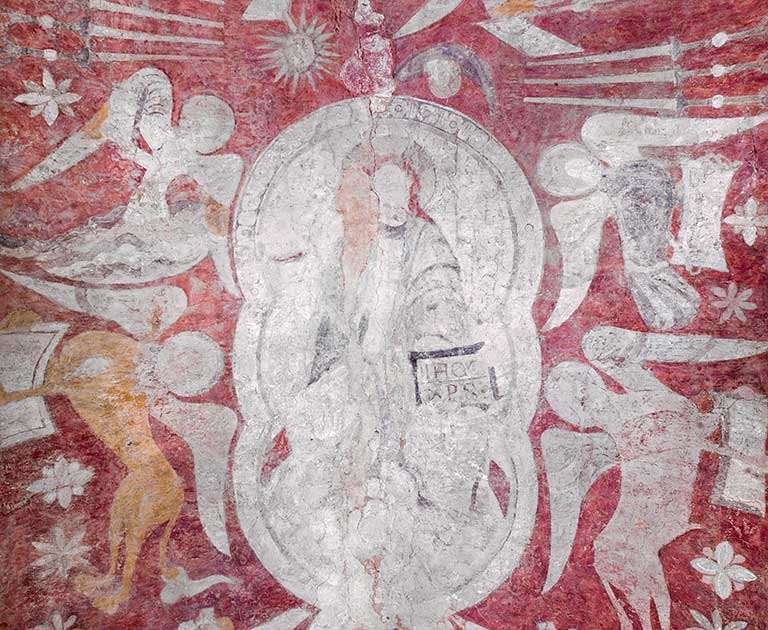 In this painting from the chancel vault, Christ is commanding the universe at the end of the world. He holds a book painted with the Greek monograms of Christ, IHC and XPS. His left hand is raised in the act of benediction. Surrounded by heavenly beings, the sun, the moon and stars, he sits on a rainbow, and rests his feet on the globe. 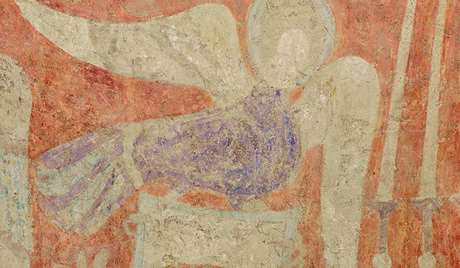 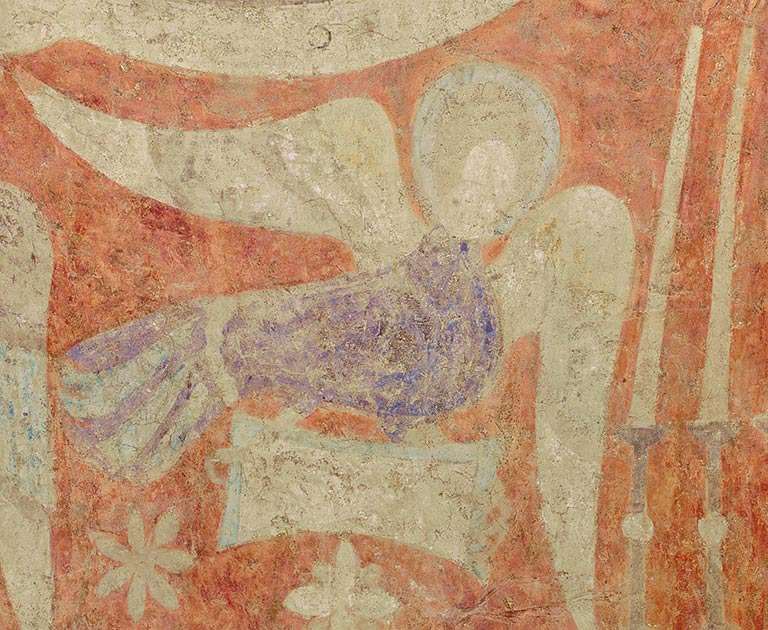 In the Apocalyse painting on the chancel vault, the four Evangelists, authors of the Gospels, surround the enthroned Christ. Each is depicted by his symbol, the angel (Matthew, shown here), the lion (Mark), the ox (Luke) and the eagle (John). 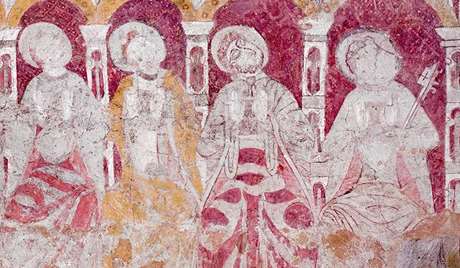 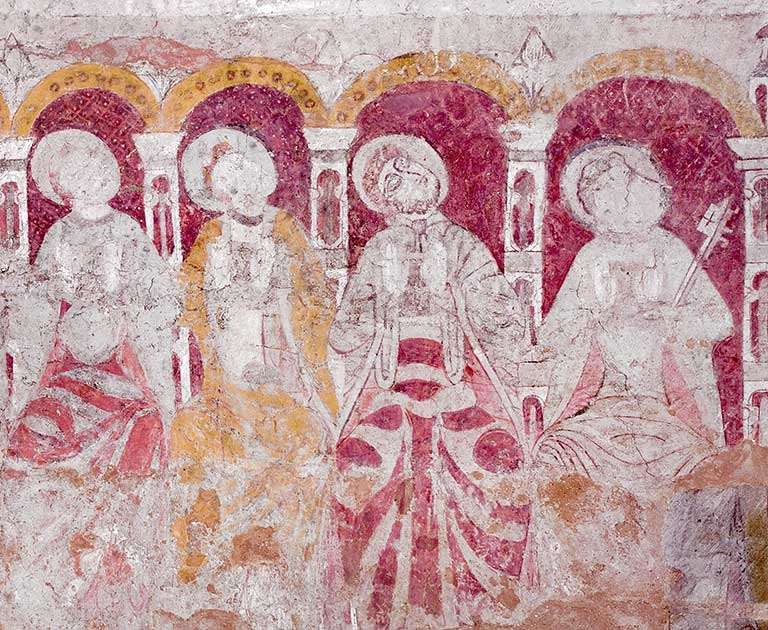 The role of the Twelve Apostles was to assist at the Last Judgement. Seated on thrones either side of the chancel, they gaze up at Christ on the vault above. Each figure has been painted to look individual, some with beards and other distinguishing details, like St Peter (on the right) who is clearly recognisable by his key (to Heaven). 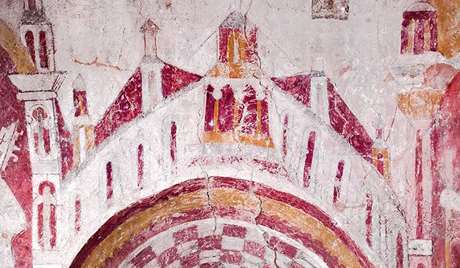 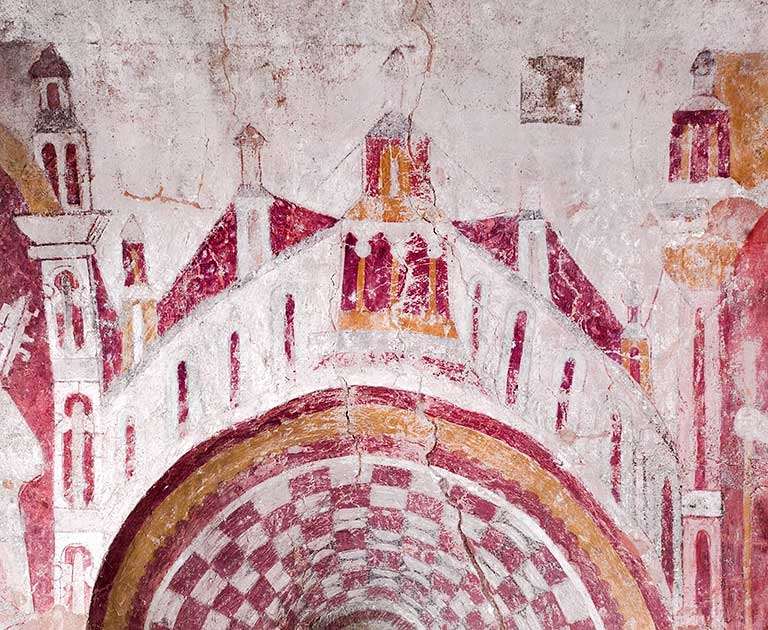 The walled city shown in this painting is a representation of the Heavenly Jerusalem, the City of God. 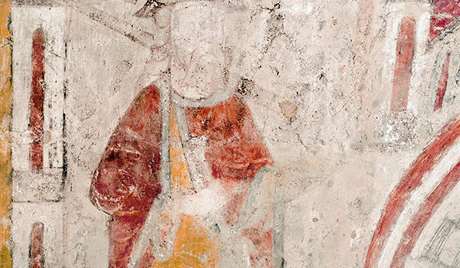 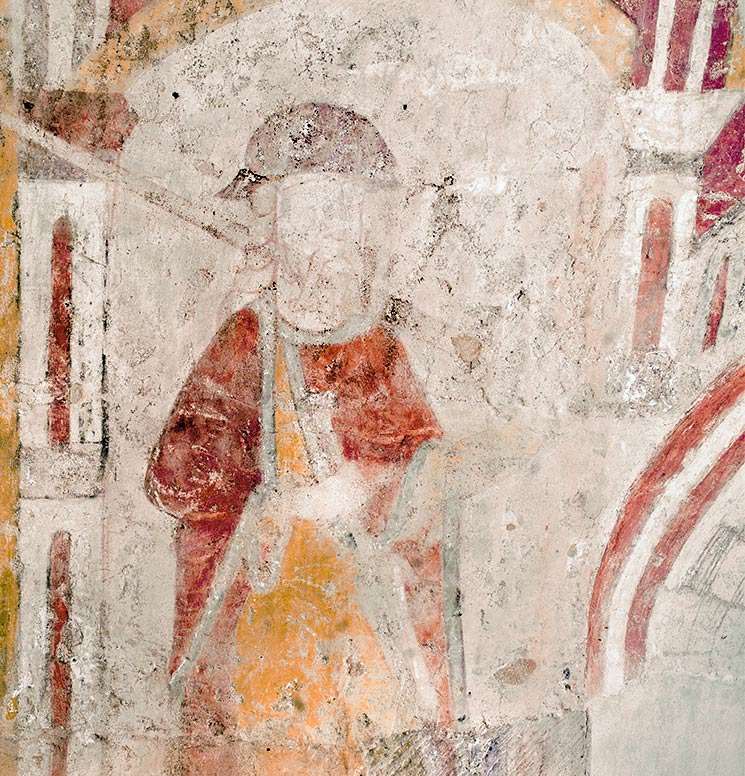 The two figures either side of the altar are dressed with pilgrims’ hats, cloaks and staffs, and carry swords over their shoulders. They may represent the church’s wealthy patrons, perhaps Hugh de Lacy and his father, Walter, possibly commemorating a pilgrimage they made to Santiago de Compostela in Spain.

On the right of the east window is a mitred bishop, dressed as for Mass and holding a pastoral staff. He is holding his hand up in blessing and may represent a contemporary bishop, perhaps the Bishop of Hereford.

Tree-ring dating has revealed that St Mary’s still has its original Norman roof and doors.

In the 1990s tree-ring dating was carried out on timbers from the church roof, which was hidden above the 17th-century ceiling in the nave. This revealed that St Mary’s roof was built in the early 12th century, making it the earliest and most complete Norman timber roof known in Britain. Unlike later medieval roofs, its 16 roof trusses were held together with collars (horizontal beams) and struts, rather than tie-beams spanning from wall to wall.

The west door into the tower is one of the earliest doors still in use in England. It was originally an external door, but the building of the tower in the 13th century has helped to protect it from the elements. The timber used for it was felled between 1114 and 1141, and all the planks were cut from a single tree. The parish chest in the tower is later, and has been dated between 1492 and 1522. Used to store villagers’ valuables, it is simply constructed from a hollowed-out oak log with an elm lid.

Image: the 12th-century timber door between the nave and the west tower