Food and Feasting at Stonehenge

Feasts were a crucial part of life in prehistoric Britain, involving long-distance travel, spectacular ceremonies and vast quantities of food.

Read on to find out more about what the people who built and used Stonehenge ate, how they cooked and served their food, and the cutting-edge science behind these discoveries.

A reconstruction drawing of Durrington Walls, near Stonehenge. People were probably travelling over long distances to take part in the feasts and ceremonies here
© Historic England (illustration by Peter Lorimer)

Around 2500 BC, the people who built and used Stonehenge probably lived at Durrington Walls, a large settlement about 2 miles away. Over 38,000 discarded animal bones have been found there – probably representing at least 1,000 animals. Analysis of these bones can tell us a great deal about where the food came from, and how people prepared their meals.

Of the bones and teeth excavated at the site, 90% were from pigs, and the rest mostly from cattle. Many still had meat attached to them when they were discarded, suggesting that there was more than enough food to go round. Some of the bones have cut-marks made by flint tools, showing that beef was cut up into pieces. Burnt foot bones suggest that pigs were often roasted over open fires.

This was not regular, everyday consumption. Many of the pigs had been killed at about nine months old. Since the piglets were most probably born in the spring, they were therefore all being slaughtered at midwinter. This suggests that people were gathering for feasts at this time of year. Both Stonehenge and some of the timber monuments at Durrington Walls were built to align with the movements of the midwinter and midsummer sun. Were people feasting at Durrington Walls, before processing to witness the midwinter sunset at Stonehenge?

Where were the animals eaten at Durrington Walls being raised? By measuring the relative amounts of different types of strontium, oxygen and sulphur in the animal bones and teeth – using a technique known as stable isotope analysis – it’s possible to work out roughly where animals were raised, as these elements are affected by geology, nearness to the coast, and climate.

Analysis of the pig teeth from the site suggests that some of the pigs were reared in west Wales, some in upland northern England and some even as far away as north-east Scotland. The cattle teeth also suggest that these animals were not raised on the local chalk geology.

The animals are likely to have been herded to the Stonehenge area, which would have been much easier than slaughtering them first and transporting the carcasses. So people were herding animals over long distances, perhaps even bringing them by boat. People across Britain must have known about Stonehenge and travelled there from afar, whether to help build the monument or to take part in ceremonies and feasts there. 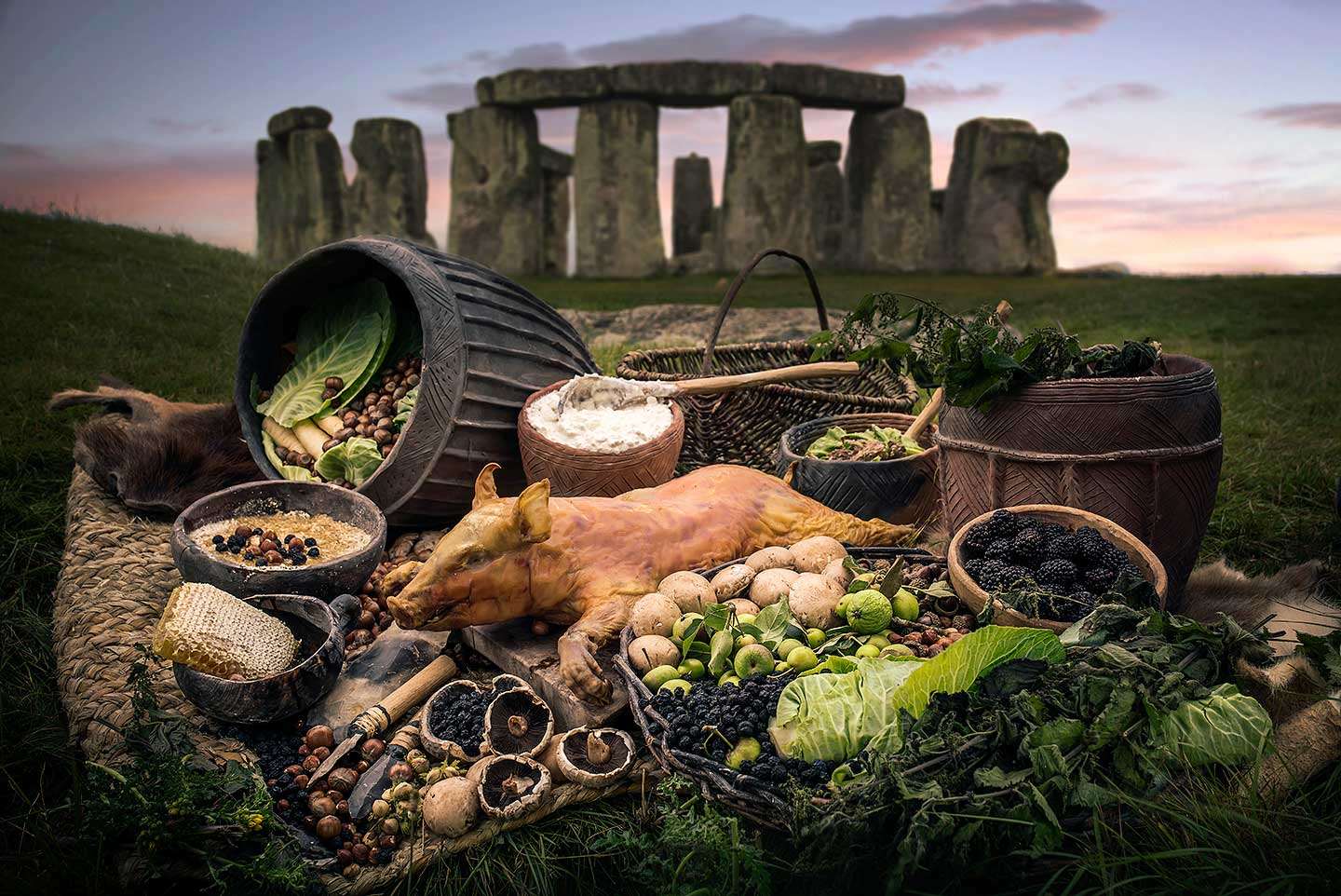 Use the hotspots to find out more about the food eaten at Durrington Walls at the time of Stonehenge.

How did this feasting at Durrington Walls contrast with people’s everyday diet? By the late Neolithic period (3000–2300 BC), people in Britain had been farming for over 1,000 years, so they were expert at raising domestic animals for meat and milk, which seem to have been the most important elements of their diet and economy. They also cultivated and processed cereals, although not on a large scale. The earliest field systems and permanent settlements date from the Bronze Age, around 1500 BC. People also continued to gather wild foods such as mushrooms, berries and plants, and to hunt wild animals.

Domestic animals and plants had arrived in Britain in about 4000 BC, brought from the Continent as part of the much wider spread of agriculture across Europe. Over time, domestication changed the body shapes and behaviours of animals. There is also some evidence of interbreeding, for example between prehistoric aurochs and domesticated cattle.

Since the Neolithic period, many types of food have become available to people living in the British Isles. The Romans brought a variety of exotic foods, and European exploration of other parts of the world led to imports of new foodstuffs such as potatoes, tomatoes, sugar and chocolate. Use our timeline to find out when different foods became widely available in Britain.

Explore the food timeline
This mineralised human poo was found at Durrington Walls and is over 4,000 years old. It contains tiny remains that can tell us what the person ate
© Mr & Mrs SJ Rawlins and Mr & Mrs WH Rawlins (Photo English Heritage/Clare Kendall)

You are what you eat!

How do archaeologists know what people ate over 4,000 years ago? Other than food remains at archaeological sites, the most direct evidence comes from analysing human bones, teeth and excrement. Teeth, for example, are an excellent source of information. Tooth decay is the result of eating too many starchy crops or too much sugar. Gritty, fibrous or hard foods can wear teeth down gradually over time, and food can also cause ‘microwear’, small scratches or pits only visible with a microscope. Dental calculus, or plaque, was common before the invention of the toothbrush and can preserve tiny fragments of food.

Scientists can also learn about diet by using stable isotope analysis to measure the amounts of carbon and nitrogen within human bone. This can indicate whether a person was eating mostly marine (eg shellfish and fish) or terrestrial organisms, and whether they had a vegetarian, meat or mixed diet. On rare occasions, when a body is preserved in ice, in a bog, or by mummification, the contents of a stomach can survive. Ötzi, for example, a Bronze Age man whose mummy was found in an Alpine glacier, had eaten preserved goat meat for his last meal.

The people living at Durrington Walls do seem to have had a meat-heavy diet, but this is because people were gathering for feasts on special occasions. This cutaway reconstruction drawing shows cooking on an open hearth within one of the houses there
© Historic England (illustration by Peter Lorimer)

The modern Paleo diet is a low-carbohydrate, high-protein nutritional plan based on the presumed meat-heavy diet that people ate in the Palaeolithic period (about 2.6 million to 10,000 years ago).

But contrary to popular belief, early modern humans didn’t just eat meat – they also ate a wide range of plants including roots, seeds and wild grasses. Even our more ancient ancestors weren’t pure carnivores – recent analysis of the dental calculus of a Neanderthal individual from El Sidrón cave, Spain, showed that he or she had eaten mushrooms, pine nuts and moss.

Unlike animal bones, plant remains often don’t survive on archaeological sites, so it takes careful analysis of pollen and tiny fossils or charred plants, coprolites or dental calculus to work out what plants and fungi people were eating. This is maybe one reason why the myth that early modern humans only ate meat has taken hold.

The people living at Durrington Walls used a type of pottery now known as Grooved Ware because of its geometric grooved decoration. It is often found at henges and ceremonial sites and seems to have been made with feasting and serving in mind.

When a pot is used for cooking, some of the food molecules seep into the porous ceramic material. Scientists have recently developed new ways of chemically analysing pottery fragments to extract these trace residues and identify them. At Durrington Walls, the pots were mostly found to contain pork and beef fats.

About a quarter of the Durrington Walls Grooved Ware pots that were tested were found to contain dairy products – milk, butter, yoghurt or cheese. Most of the pots that had held dairy products were found in and around the Southern Circle, a timber ceremonial monument. Perhaps milk was part of the religious ceremonies that took place there. In many world cultures, milk is seen as a special substance, associated with purity and nourishment.

We know that people in Britain at this time were lactose-intolerant –  they did not have the ability to digest raw milk – and therefore had to process milk into products like cheese and yoghurt so that they could digest it. In this video, Dr Penny Bickle from the University of York explains how Neolithic people might have made cheese.

More about prehistoric cheese
This bronze cauldron was found at the bottom of a lake at Llyn Fawr in Rhondda Cynon Taf, south Wales. Dating from about 700 BC, it was part of a hoard of objects, probably an offering to deities associated with a lake. It would have been used and displayed during large feasts
© National Museums Wales

The late Neolithic period, when the stone circle at Stonehenge was built, wasn’t the only time in prehistory that communities gathered to hold large feasts. Later, at the end of the Bronze Age and in the early Iron Age (1000–600 BC), large midden sites (waste dumps) were created by people gathering for feasts across southern England and Wales. They survive today as deep build-ups of dark soils (which is why they are sometimes known as black earth sites) and usually contain ash, manure, food remains and pottery.

These mounds of dark earth, made of fertile organic remains, were not spread on the fields as would normally be expected, but appear to have been deliberately kept and built up into huge mounds. These may have become markers of community identity and symbols of fertility. At least 30 such midden sites are known and their size can be quite extraordinary – the small part of the midden excavated at Potterne, Wiltshire, has produced about 134,000 animal bones. Archaeologists often find fragments of cauldrons, smaller bronze bowls and ladles in middens, suggesting that display and serving with style were important parts of the feasting ceremonies.

The earliest Iron Age midden sites also contain many fragments of pottery, much of it highly decorated. Some of the vessels from All Cannings Cross in Wiltshire, for example, were burnished, possibly to imitate cauldrons. Sharing food from such vessels may have been a way of negotiating friendships and alliances in the community.

You can find out much more about the scientific research into food and feasting in prehistory from:

More about Stonehenge and prehistoric feasts