Stonehenge stood at the heart of the world’s largest military training camp during the First World War. One million men trained for war there between 1914 and 1918, coming from across the Commonwealth.

Explore these objects and images to find out what life was like for the men and how the Stonehenge landscape and its communities were changed by the First World War. Select an image to see a larger version and to read more information about the object or photograph.

This image shows the harvest gathered in mainly by women assisted by Soldiers in Downton, Wiltshire. Shortages of farm workers during the First World War meant that many more women had to work on the land. In 1916 the Wiltshire Women's Land Corps provided 2,656 voluntary workers and in 1917 recruits began receiving wages for their work when the Women's Land Army was formed. 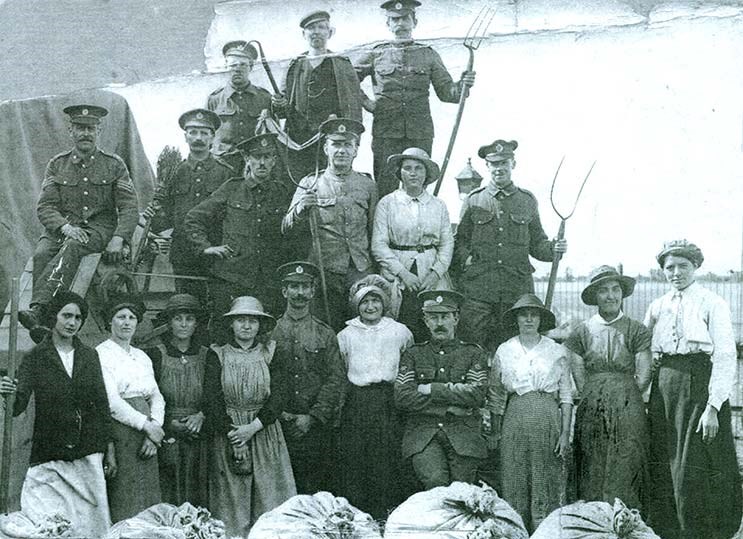 Dennis Wheatley trained as an artillery officer on Salisbury Plain in 1916. Wheatley later became famous as a writer of occult novels and used Stonehenge as a setting in his most famous novel The Devil Rides Out.

This card target can be seen along with a selection of other papers and artefacts from Wheatley's time on Salisbury Plain.

Original drawing of The Better 'ole cartoon by Captain Bruce Bairnsfather.
The artist Bruce Bairnsfather trained troops on Salisbury Plain in 1915 after having been shell-shocked near Ypres in 1915. While at Sutton Veny he drew what became his most famous cartoon in which an old soldier says to a young one 'Well, If you knows of a better 'ole, go to it.' 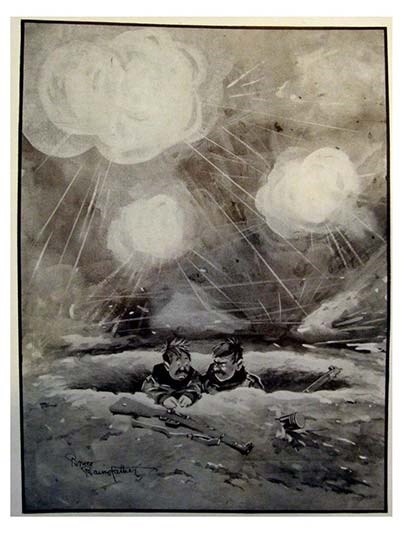 Men of the 10th (Alberta) Battalion pass Stonehenge. From October 1914 to February 1915, over 30,000 Canadians trained on Salisbury Plain before departing for the Western Front.

Souvenirs such as this gave a cheerful picture of a soldier's life to reassure those at home. These French-made cards were popular on the Western Front but were more unusual in Britain. From 1916, Australians and New Zealanders became the most numerous overseas troops on Salisbury Plain 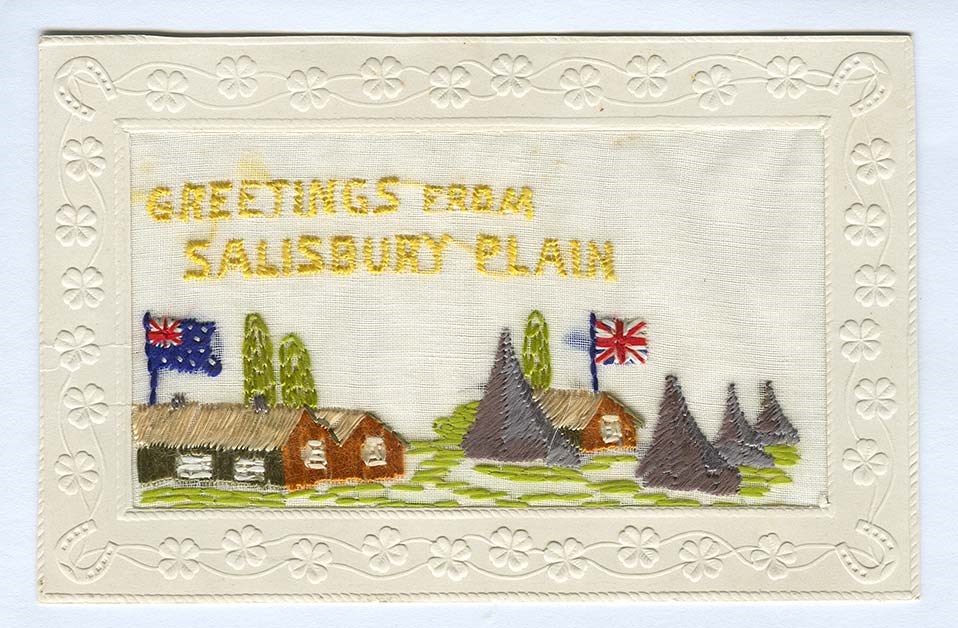 The artist and poet David Jones served with the London Welsh Battalion of the Royal Welch Fusiliers and drew this sensitive study of a soldier sleeping in his great coat with his equipment for a pillow while training on Salisbury Plain. He was later wounded on the Somme in 1916. 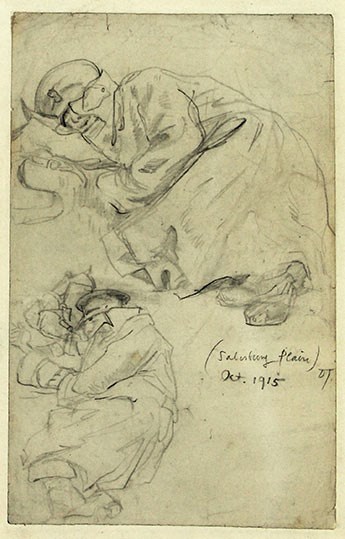 This Wiltshire Regiment cap badge is evidence of construction work and training at Yatesbury airfield. Other finds from the airfield include cap badges of the Royal Flying Corps and Royal Engineers, a cartridge case and bullet from a machine gun range, and a turn buckle used for tightening aircraft rigging.

Found during field walking as part of the Yatesbury RFC Aerodrome Community Archaeology Project, run by Finding the Forgotten and the Wiltshire Archaeology Field Group. 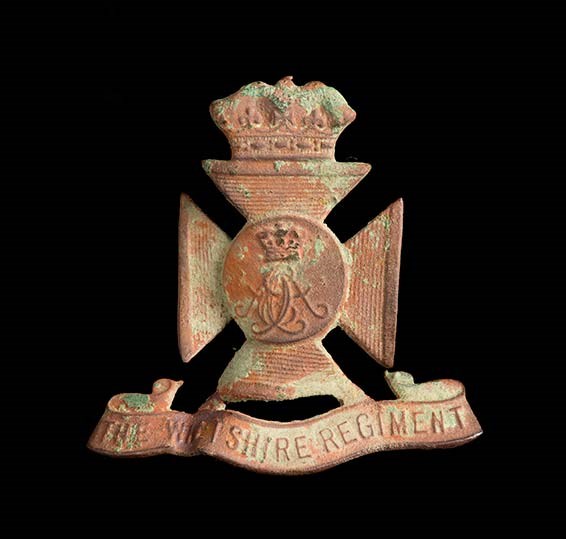 Sale Catalogue for the Amesbury Abbey Estate and Stonehenge, 21 September 1915

Sale Catalogue for the Amesbury Abbey Estate and Stonehenge, 21 September 1915

Sir Edmund Antrobus, the owner of Stonehenge, died in February 1915, less than four months after his only son and heir was killed in action. As a result, the Amesbury Abbey estate including Stonehenge was sold at auction. There were calls for the nation to purchase Stonehenge but it was actually bought for £6,600 by Cecil Chubb, a Shrewton-born barrister. 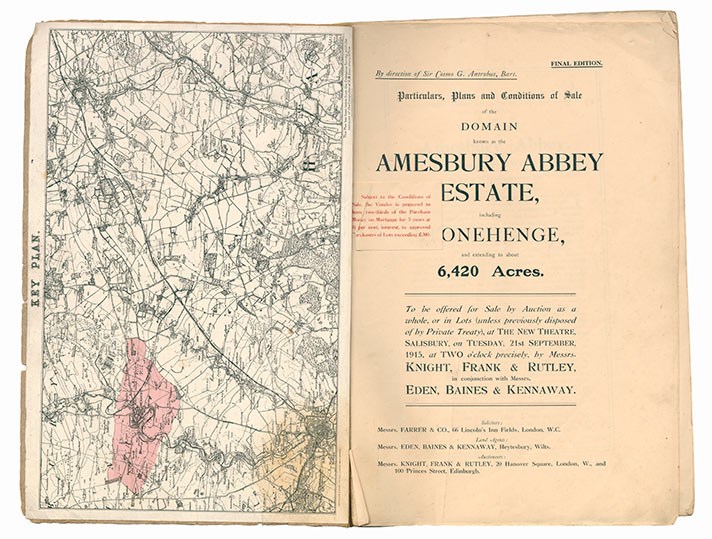 At the beginning of the First World War Stonehenge was privately owned by Sir Edmund Antrobus. His son and heir, Lieutenant Edmund Antrobus, was killed at Ypres, Belgium on 24 October 1914 and his father died just four months later, it was said of a broken heart. This portrait, attributed to Howard Speed, still hangs in Antrobus House in Amesbury. 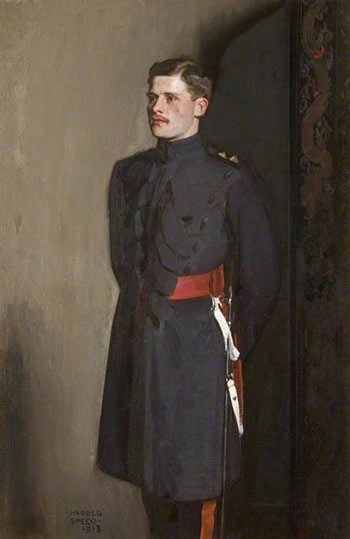