Stones that align with the sun 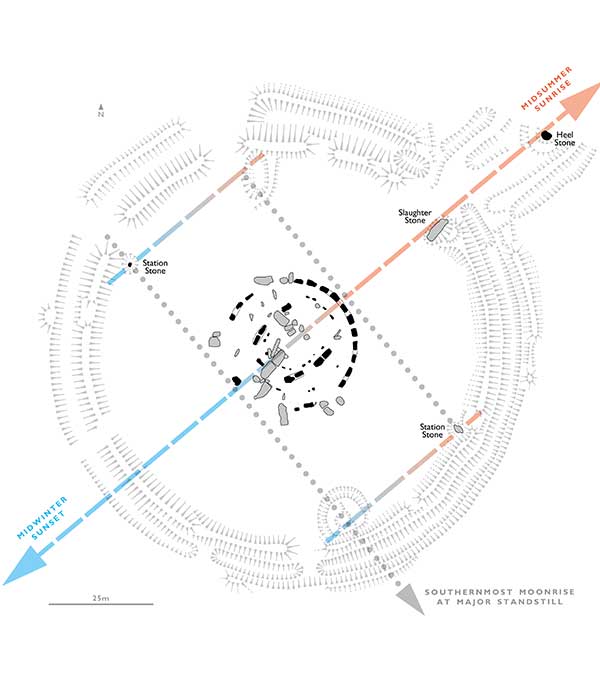 The sarsen stones, put up in at the centre of the site in about 2500 BC, were carefully aligned to line up with the movements of the sun. If you were to stand in the middle of the stone circle on midsummer’s day, the sun rises just to the left of the Heel Stone, an outlying stone to the north-east of the monument. Archaeological excavations have found a large stone hole to the left of the Heel Stone and it may have held a partner stone, the two stones framing the sunrise.

On midwinter’s day, turning 180° to face towards the south-west, the sun would originally have set between the two uprights of the tallest trilithon, at the head of the sarsen horseshoe. It would have dropped down into the Altar Stone, a sandstone block which was placed across the solstice axis. Today, this effect has been lost because one half of the trilithon has fallen at some point in the history of the monument. Analysis of a laser survey of Stonehenge has shown that those stones that frame the solstice axis were the most carefully worked and shaped using hammerstones, creating vertical sides that framed the movement of the sun.

The whole layout of Stonehenge is therefore positioned in relation to the solstices, or the extreme limits of the sun’s movement; the word solstice is derived from the Latin sol ("sun") and sistere ("to stand still"). The solstice axis is also marked by the Station Stones which are positioned in a rectangle on the edge of the surrounding circular ditch, with the short sides of the rectangle on the same alignment as the sarsen stones.

The avenue, made up of parallel banks and ditches, links Stonehenge to the nearby River Avon. It also has an important link to the movements of the sun, with its final straight stretch close to Stonehenge aligned on the north-east to south-west solar axis. Recent excavations across the avenue have found that the earthworks appear to follow the line of some natural ridges, with gullies (known as periglacial stripes) between them. These are natural features from glaciation, but the presence of ridges and gullies that happened to line up with the solstice may have been noticed by Neolithic people, leading them to build Stonehenge on this particular site. 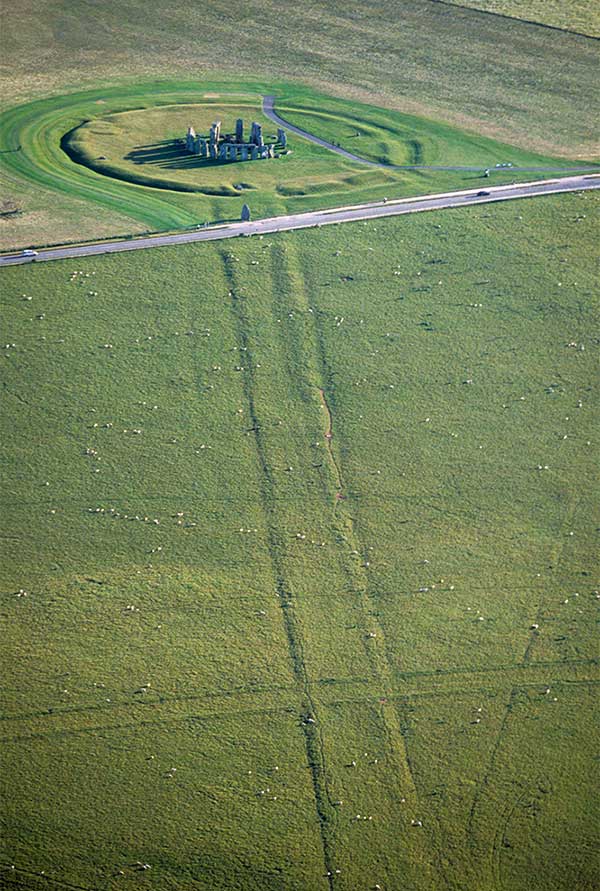 Stonehenge and the avenue from the air

Marking the movements of the sun was clearly important to the people who built Stonehenge, as they went to such enormous effort to carefully line up the monument. However, there is very little evidence as to what ceremonies might have taken place here; there are few clues from excavations within the stone circle seems to have been kept clean and separate from everyday debris. We can imagine that people gathered at the monument to celebrate the midsummer and the midwinter, although only a few people would have been able to directly observe the important alignment.

The people who built Stonehenge were farmers, herders and pastoralists and so the changing seasons would have been of immense significance. This was practical – the seasons dictated what they could grow and when – but also probably spiritual. So Stonehenge is likely to have been much more than simply a calendar. These dates may have been important times of year to remember the dead, as we know that people buried about 150 of their cremated dead at the monument, or to worship a solar deity.

It’s also thought midwinter, rather than midsummer, would have been perhaps the most important focus for the people who built Stonehenge. This is partly because the alignments towards the setting midwinter sun are ahead of you when walking up the avenue and entering the monument, much the same as the most important parts of a church are located in front of you when you enter. There is also that people gathered to feast at midwinter at Durrington Walls, the settlement to the northwest of Stonehenge where the builders and users lived. Pig bones have been found buried in pits and in rubbish dumps known as middens, and most were killed when they were about nine months old. If these pigs had been born during the spring, the majority were being killed at midwinter. Evidence from the cattle and pig bones show that they were being brought over long distances to the feasts at Durrington Walls, suggesting that midwinter was a time when people gathered in great numbers to conduct ceremonies at the monuments and feast together.

Why celebrate and gather at midwinter? The nights are long and the days are cold, and after the bounty of summer and autumn, stocks of food are beginning to dwindle. The ground is frozen solid. Nothing seems to grow. The sun’s dim light barely scrapes above the horizon, and around the solstice the sun seems to stand still – its position in the sky barely moves at all, and that’s plain to see as people gather to watch the sun set between the Great Trilithon. It might have seemed that the sun – giver of light, warmth and life – was dying.

And then, thankfully, the sun starts to move northwards again, and after a few days it no longer rises between those two great stones. It’s still cold, and the nights are still long, but as the sun resumes its journey north it’s clear that the days will get longer, and warmth will return. The rebirth of the sun promises of another year of life.

The moon, planets and stars 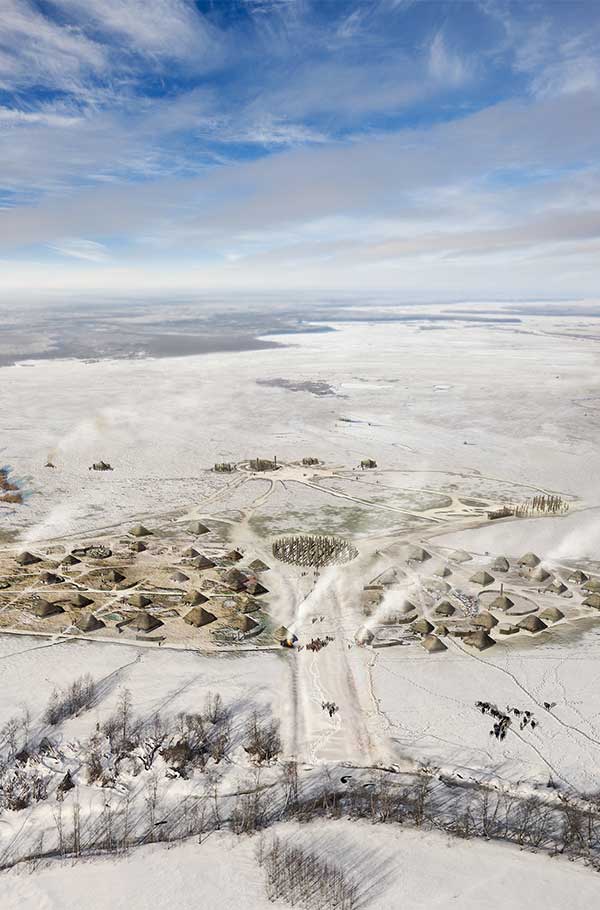 Although we can be sure that Stonehenge was aligned with the sun, whether the movements of the moon were marked is more debateable. Whereas the sun follows a cycle that takes place roughly over the course of a year, the moon’s cycle is much more rapid. Moonrise and moonset move from their northernmost to southernmost limits and back again in the course of just a month. For ancient people the light of the moon would have been useful at night, especially in midwinter, and the regular lunar phases would have been a convenient way to measure time.

It is possible that the one major standstill of the moon was marked during the early phase of Stonehenge. During this period, particularly between about 3000–2800 BC, people were burying their cremated dead in the Aubrey Holes (56 pits within the ditch which held upright timber posts or stones) and in the ditch and bank of the henge. These cremations cluster in the south-eastern part of the monument, in the direction of the most southerly rising position of the moon, where there were three timber posts set into the bank. The long axis of the rectangle formed by the four Station Stones also shares this same orientation, in the direction of the southernmost moonrise at the major standstill. There may have been a close association between the moon and the white bones of the cremated dead.

There is no evidence to suggest that the people who built Stonehenge marked the midpoints between the solstices in spring and autumn. Although people today gather at the equinoxes at Stonehenge to watch the sunrise, archaeo-astronomers think it is unlikely that the equinoxes meant anything to prehistoric people.

The stars and visible planets may also have been important to people in prehistory, but it is impossible to know any beliefs relating to them for sure. Certainly they are likely to have had stories, myths and histories relating to the constellations and movements of the planets. The gradual changes caused by the precession of the rotational axis of the Earth means the rising and setting positions of the stars have changed over the centuries, and so the night sky above Stonehenge today is not the same as the one our ancestors would have seen thousands of years ago.

Other monuments in the Stonehenge landscapes were also built to align with the movements of the sun. Woodhenge, a timber monument near Durrington Walls, was built on the same axis, aligning with the midwinter and midsummer solstices. The nearby timber monument known as the Southern Circle is orientated towards the midwinter sunrise, and has an avenue leading down to the River Avon that is aligned on midsummer sunset. These alignments might suggest that people undertook processions and ceremonies in one part of the Stonehenge landscape at dawn, processing to another part at sunset. Clearly the monuments were closely connected to principles relating to these important solar directions.

Several other elaborate monuments dating from the late Neolithic period in Britain and Ireland were built to align with the sun. A similar alignment to the one at Stonehenge is known at the chambered tomb of Maeshowe on Orkney, the passage of which is orientated towards the setting sun at winter solstice. The entrance of the enormous passage tomb at Newgrange was built to align with the midwinter sunrise, with the sun shining directly into the chamber through a roof-box above the entrance, once closed with quartz blocks. This same midwinter dawn alignment is also known at Bryn Celli Ddu passage tomb on Anglesey, Wales. Interestingly, given the use of Stonehenge for the burial of the dead, all these other monuments were also used for burials, and were places where people gathered for ceremonies and feasting. It may indicate that people in these distant places shared similar beliefs and religious practices.