History of the Sanctuary, Avebury

The Sanctuary was a remarkable ceremonial temple, built of concentric rings of standing stones and wooden posts. We do not know if the stones and posts all stood at the same time, but archaeological finds from the site suggest that this unique monument was used in the late Neolithic period, and probably built about 2500 BC.

William Stukeley’s drawing, made in 1723, shows the Sanctuary when many of its stones were still standing, before the land was cleared for agricultural use
© Chronicle/Alamy Stock Photo

The stone circles were first recorded by the antiquary John Aubrey, who first visited in 1649 and noted that local people called it ‘The Sanctuary’. His plan of the monument and its associated avenue shows that many of the stones were still standing.[1]

In 1723 another antiquary, William Stukeley, also drew the stone circles, but shortly afterwards the monument was destroyed so that the land could be used for agriculture.[2]

Excavators at the Sanctuary in 1930, standing in some of the excavated pits. Standing with notebook is Benjamin Cunnington, who co-directed the excavations with his wife, Maud
© Alexander Keiller Museum / WEV Young 1930

Using these antiquarian records, Maud Cunnington rediscovered and excavated the Sanctuary in 1930. With her team, she found two concentric rings of stoneholes, and unexpectedly, five rings of postholes.[3] Many objects including flint tools, animal bones, human remains and pottery fragments were found, seemingly placed according to certain rules and patterns as people moved about the monument.

Today the positions of the stoneholes are marked with rectangular blue concrete blocks, and the postholes by circular red blocks, a scheme devised by Cunnington to help visitors understand the monument’s layout. 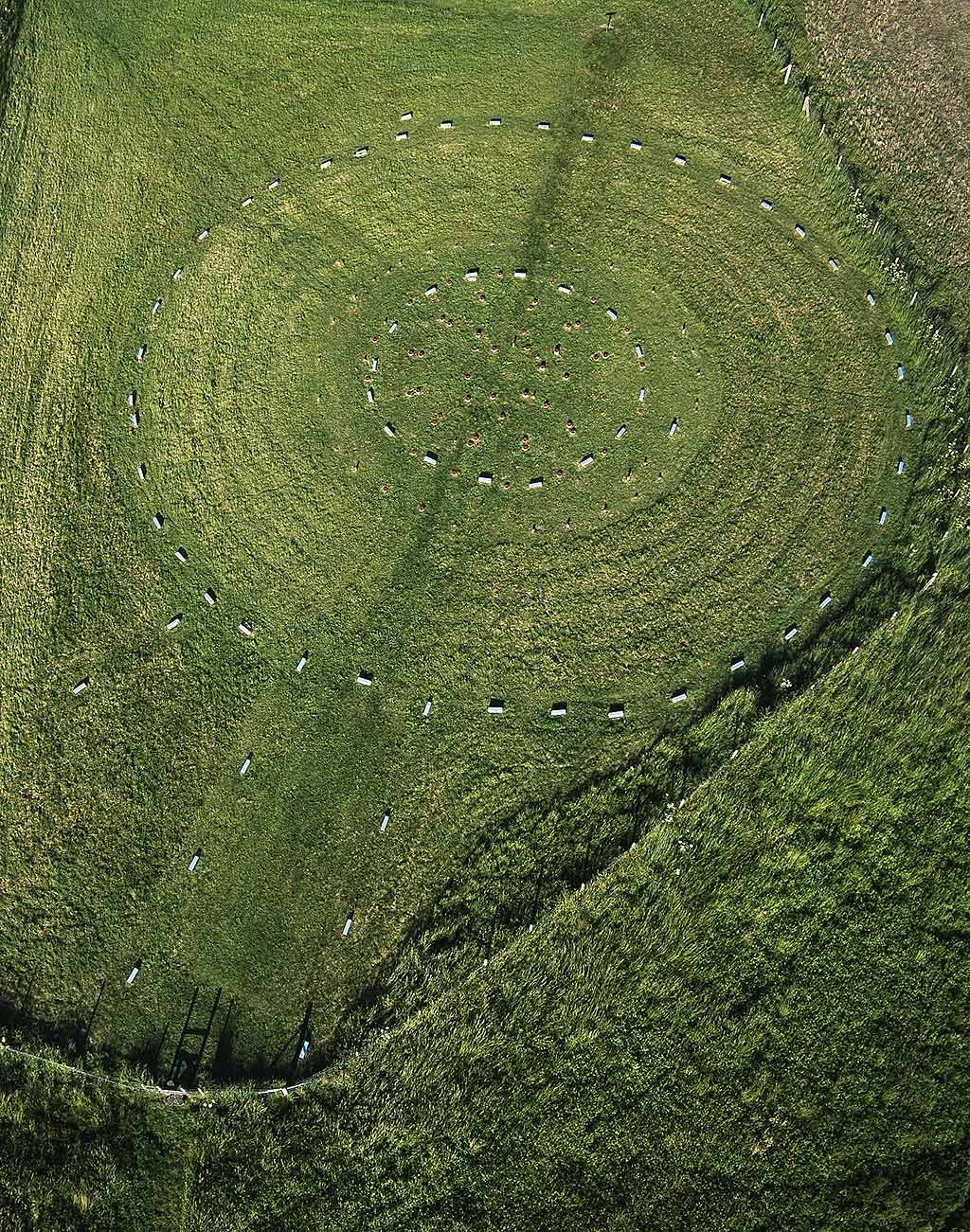 An aerial photograph of the site. The concrete blue and red blocks mark the positions of the stoneholes and postholes respectively

The standing posts and stones of the Sanctuary seem to have been carefully positioned to control the space and the movement of people, restricting visual and physical access to the ceremonies that took place inside.[4] We don’t know if all the elements stood at the same time, or whether the monument was built in several stages.

Working inwards from the outermost circuit, the largest stone circle measured about 40 metres (138 feet) in diameter and comprised 42 small sarsen stones. Enclosed within this were five concentric circles. The largest and outermost of these had timber posts which probably stood about 1 metre (3 feet) high, with two larger posts on the north-west side marking an entrance.

The next ring had alternating standing stones and timber posts (16 of each). Within this were two further circles of 12 and 8 timber posts. Each of the postholes forming the outer of these circles was associated with a short ramp, presumably dug to help erect much taller timbers. These are now marked by double concrete markers. The taller posts stood as high as 3 metres (10 feet) and perhaps originally supported horizontal lintels.

Finally, at the centre there was a ring consisting of six smaller timber posts with slender stakes positioned between them. In the middle was another small stakehole.

Some archaeologists have suggested that the concentric rings represent a roofed building, but it seems more likely to have been a free-standing structure. Excavations by Mike Pitts in 1999 showed that individual posts were replaced on a number of occasions – an activity which would have been difficult under a heavy thatched roof.[5]

Part of a complex

Located on Overton Hill, the Sanctuary lies at one end of the West Kennet Avenue, two parallel rows of standing stones that stretch over 1½ miles (2.3km), linking the site to the henge and stone circles at Avebury. This avenue may not have been continuous – there seems to be a gap about halfway along, where a spring was located.[6]

During the early Bronze Age, while the Sanctuary was standing, a series of timber enclosures and temples were built and occupied in the nearby Kennet valley, now known as the West Kennet palisaded enclosures. The great mound of Silbury Hill was also constructed shortly after the Sanctuary was built. The Sanctuary as it may have looked in about 2300 BC, when a teenage boy was buried at the site. In the background, the West Kennet palisaded enclosures and Silbury Hill are being constructed
© Historic England (illustration by Peter Urmston)

In the early Bronze Age, about 200 years after the Sanctuary was constructed, a teenage boy was buried against the base of one of the stones. His body was accompanied by a small Beaker pot – a distinctive style of decorated pot that spread to Britain from the continent from about 2300 BC. There are several examples from the Avebury area of burials placed at the base of older standing stones in this period.

Chemical analysis of this boy’s teeth shows that as a child he had lived a long way from the local area, in the west or north of Britain, Ireland, or possibly north-west France.[7] By the time of his burial, the monument would already have been old, with the timber posts rotting and decayed.