The site of Tintagel Castle has been inhabited at least since the late Roman period, and a community flourished here in the 5th to 7th centuries. In the 12th century Tintagel gained literary fame when Geoffrey of Monmouth named it as the place where King Arthur was conceived. These Arthurian associations may have inspired the fabulously rich Richard, Earl of Cornwall, to build a castle at Tintagel in the 1230s, and the enduring legend still ensures Tintagel’s international renown.

No conclusive evidence has been found that there was an Iron Age fort at Tintagel, although the site would have been similar to those of Iron Age promontory forts found on other south-western headlands, such as on Willapark headland, 1 mile east.

Similarly it is uncertain how much activity there was on the site in the Roman period. The two Roman honorific markers from the area, one now in Tintagel church and one at Trethevy 1½ miles east, suggest some presence in the area in the 3rd and 4th centuries. Various small finds, including pottery and some late 3rd- and early 4th-century Roman coins, also suggest activity on the headland at this period. However, this seems unlikely to have been significant. 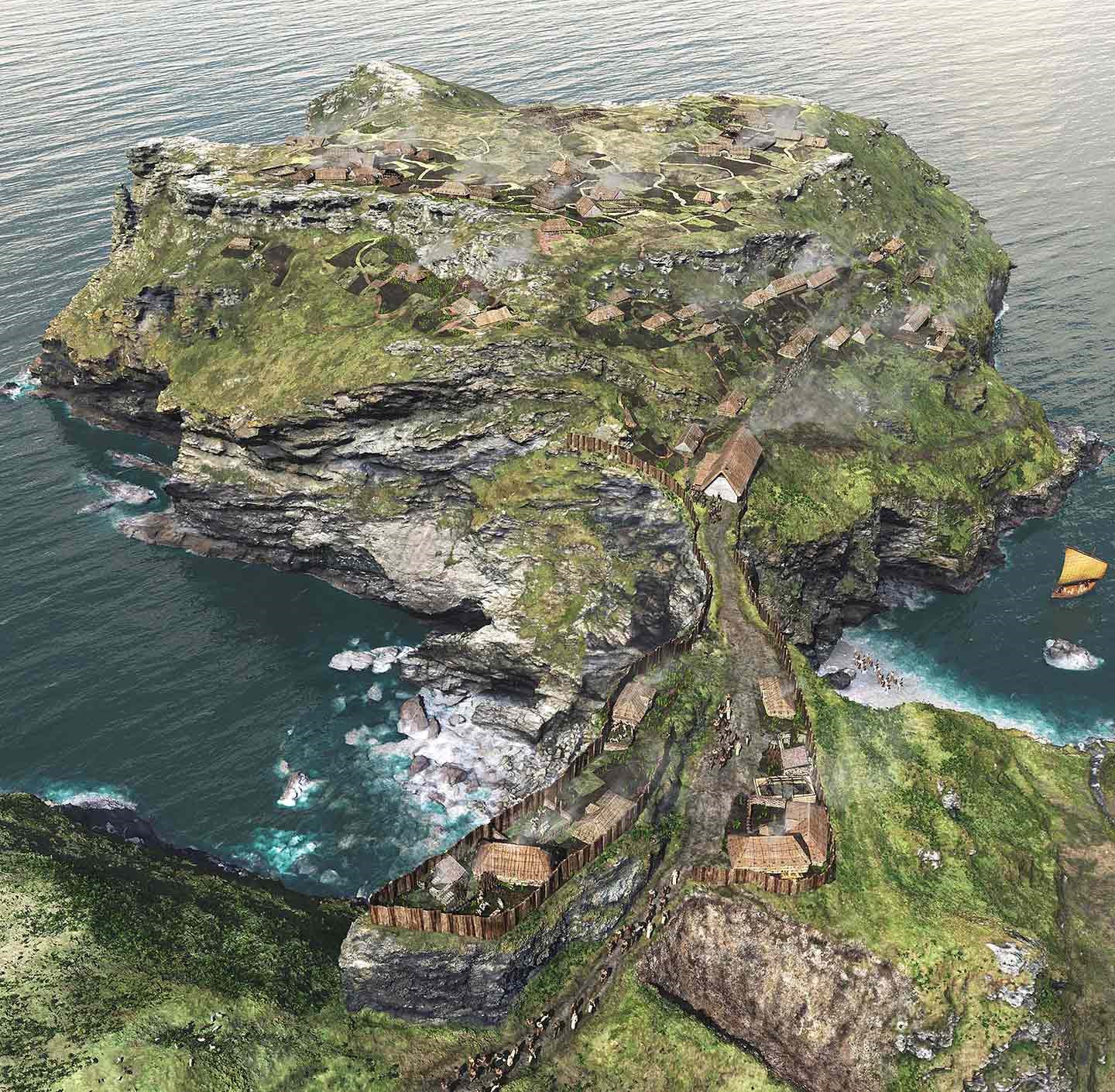 A reconstruction of Tintagel as it may have looked in about 700, showing the island dotted with simple houses
© Historic England (drawing by Aaron Watson)

Tintagel in the 5th to 7th centuries

From about AD 450 until about AD 650 Tintagel was a prosperous and highly significant site, closely involved in trade with the Mediterranean world. The island was covered with many small rectangular buildings, some visible today. A large bank and ditch, also still visible, defended the landward side of the narrow neck, which at this date may have been as high as the land on either side.

The site’s precipitous headland (the island), connected to the mainland only by a narrow neck of land, makes it strongly defensible, with extensive views over the whole southern part of the Bristol Channel. Most unusually it also has supplies of fresh water.

The most likely explanation of the site is that it was a secular stronghold of the then rulers of Dumnonia (Devon and Cornwall). British kingship at this period was peripatetic, so Tintagel would probably have been one of several royal sites in Devon and Cornwall.

The headland could also have been defensive, possibly a response to settlement in its hinterland by Irish-speaking colonists at the same period, known from monumental stones with Irish inscriptions found in north-east Cornwall and down to the Tamar valley.

Pottery and glass were imported to Tintagel from all over the Mediterranean during this period. This map shows the known sources of these wares

Tintagel and the Mediterranean World

Both the importance and the date of the early occupation of the site are evident from the many pieces of imported Mediterranean pottery, including high-quality tableware, found on both the mainland and the island. Such fragments have been found all over western Britain, but Tintagel has by far the largest quantity so far discovered.

Fragments of Mediterranean glass of the same period have also been found. These goods arrived in the south-western peninsula by ship as part of a systematic trade which brought luxury goods and in exchange presumably took tin, the most distinctive and desirable commodity produced here, back to the Mediterranean.

The pottery finds, combined with the buildings on the island, some of which have hearths, suggest intensive occupation at this period.

The early settlement remains on the eastern slopes of Tintagel island, looking across to the rocky headlands of the Cornish coast. The dramatic landscape was vividly described in Geoffrey of Monmouth’s ‘History of the Kings of Britain’

The birth of the Arthurian Legend

After the mid-7th century there is little evidence of activity on the headland for over 500 years. In about 1138 Geoffrey of Monmouth’s History of the Kings of Britain gave the figure of King Arthur, the legendary ruler of Britain, Ireland and large parts of continental Europe, its international fame.

The History contains the earliest written mention of Tintagel in the tale of how Arthur was conceived there by Uther Pendragon, King of Britain, the result of his magically assisted seduction of Queen Igerna (Igraine), wife of Duke Gorlois of Cornwall.

The reasons for Geoffrey’s use of Tintagel can only be guessed. He associated Arthur closely with Cornwall, and Cornish legend may have preserved a folk memory of the earlier importance of the site, perhaps as a stronghold of the rulers of Cornwall. Geoffrey described its dramatic physical attributes, evidently appreciating its romantic nature.

Independent support for such a folk memory comes from the legend of Tristan, known from French and German poems later in the 12th century, which seem to have drawn on Cornish legends. Tintagel appears in these poems as the court of Tristan’s uncle, King Mark of Cornwall.

The visible remains on the headland would have helped to keep alive a memory of its former importance. 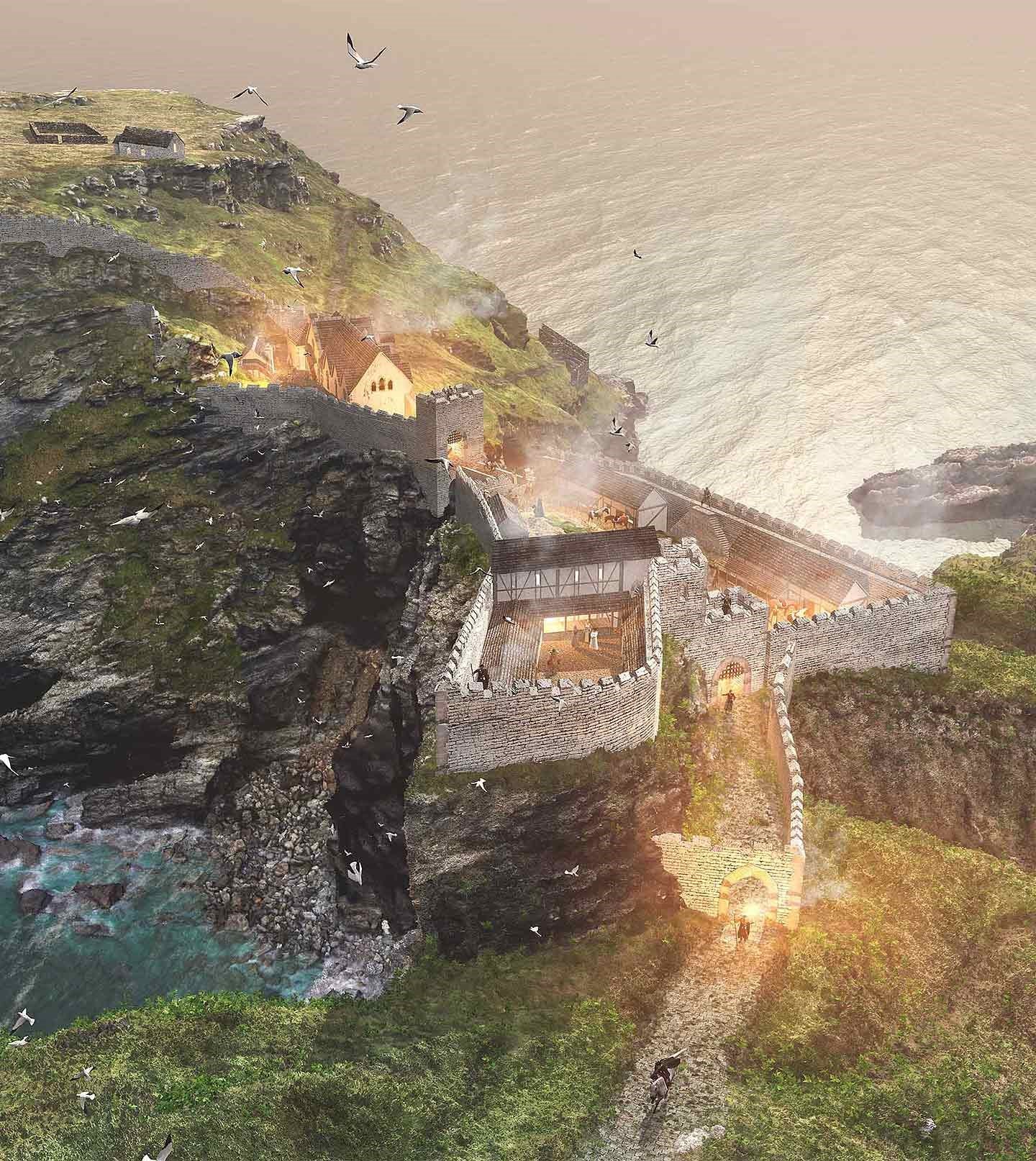 In May 1233 the newly created Earl of Cornwall, Richard, brother of Henry III, bought the ‘Island of Tyntagel’, together with ‘Richard’s castle’, from Gervase de Tyntagel (whose father, Robert, had changed the family surname from Hornicote to Tintagel).[1] ‘Richard’s castle’ was presumably built by the earl himself. If so, it was begun between 1225, when King Henry granted him the county of Cornwall, and 1233, when the transaction took place.

It is likely that Earl Richard was keen to exploit Tintagel’s international literary fame. In about 1242 he used the castle to receive his nephew, the Welsh prince Dafydd ap Llywelyn, whose allegiance to Henry III was questionable.[2] Any doubts over Richard’s own loyalty, however, were dispelled when soon afterwards he campaigned in Wales on Henry’s behalf against Dafydd.

Apart from this episode, little is known of how much the castle was used, if at all. Earl Richard was involved in international politics, going on crusade to the Holy Land in 1240 and being elected King of the Romans (ruler of Germany) in 1257. From that date until his death in 1272 he is unlikely to have had much time to visit Cornwall.

Read more about Richard and Tintagel
The remains of the battlemented curtain wall, built between 1240 and 1260, which surrounded the island courtyard

Tintagel in the later Middle Ages

By 1337, when the Duchy of Cornwall was created, the great hall of the castle was in decay;[3] the constant coastal erosion of the site may have caused a partial collapse. Edward the Black Prince, the first duke, had the hall reworked into smaller buildings.

A small staff, including a chaplain, was employed to look after the castle, and in the late 14th century two high-status prisoners were brought there from London for secure keeping. A survey made in 1583 recommended that the headland should be strengthened against possible foreign landings, but by 1600 the site was largely deserted.[4]

The cavern on the west side of the Haven beach, which has been known since the late 19th century as Merlin’s Cave

The growth of the Arthurian Legend

Although the castle was little used, imaginative legends continued to flourish. In about 1480 the antiquary William Worcestre gave Tintagel as the place of Arthur’s birth as well as his conception; and in 1650 the name King Arthur’s Castle is first found.

By this date references to King Arthur and to the castle had become an inextricable mixture of local folklore and literary legends. In medieval romance Caerleon, and then the legendary Camelot, not Tintagel, had occupied the role of King Arthur’s castle.

Oliver Padel is an authority on Cornish place-names and history, and president of the English Place-Name Society. He has also written about the legends of Arthur and Tristan.

Find out more about the castle