Wrest Park, like many other country houses, was pressed into service as an auxiliary hospital during the First World War.

Wartime hospitals were real social mixing pots. Hospital work threw together people from many different places and vastly different backgrounds, all with a common purpose – caring for the wounded.

Official records and diaries give us glimpses of the women who came to Wrest to work as nurses. Unfortunately, many remain unidentified and their important contribution is unrecognised. Can you help us tell their story?

Most WWI auxiliary hospitals were staffed by volunteers from the Red Cross and Order of St John of Jerusalem, but Wrest Hospital was different. It was privately organised and funded by the then owner, Auberon (Bron) Herbert, 8th Baron Lucas.

Nan Herbert, Bron's sister, supervised the transformation of the house into a hospital. She was also responsible for the recruitment of nurses, a difficult task in wartime as trained nurses were in short supply. Many of those taken on proved unsuitable as Nan noted in her diary:

'An assortment of nurses came and went – two or three who drank, one who took drugs, stewardesses who wanted to do war work, and probationers who preferred sharing a chair with a patient to finding an empty one.'

In time, though, a dedicated team of around 20 nurses was assembled. They were skilfully managed by Nan who took on the role of matron after a crash course of training at the Metropolitan Hospital in London.

The Wrest Park Nurses in Colour

Some of the wonderful photographs of nurses from Wrest Park Hospital have been painstakingly colourised using the latest digital technology.

These images breathe new life into the fascinating stories of the First World War nurses as we can now see what they and the hospital would have looked like in glorious colour for the first time.

Click on the thumbnails below to explore the images. Group photograph of nurses on the terrace at Wrest in 1915. The hospital was staffed by 20-25 nurses and could accommodate up to 200 patients. 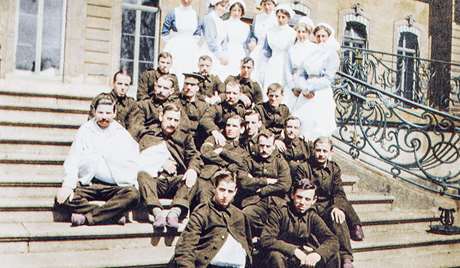 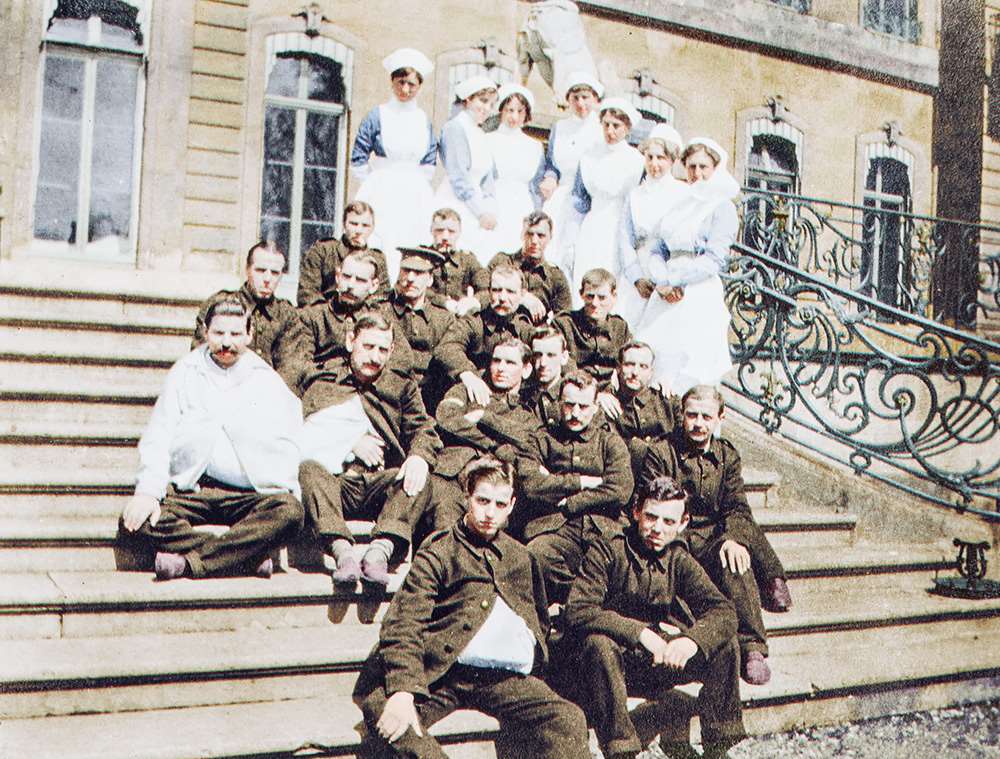 Nurses and convalescents on the terrace steps at Wrest, Christmas 1914. The names listed below the photograph are probably those of the convalescents. 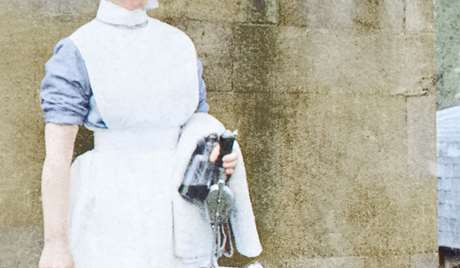 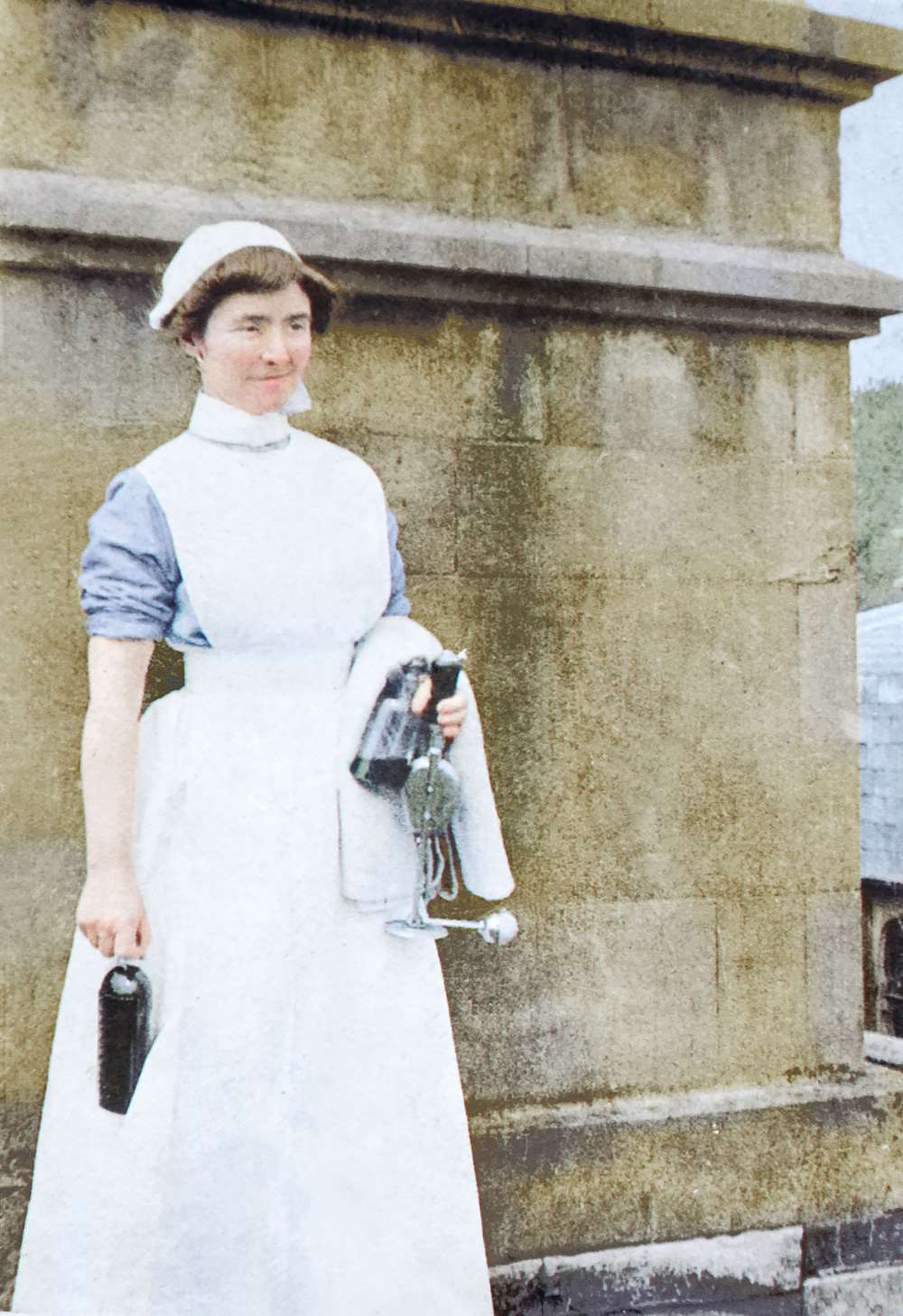 Nurse Phillburn on the terrace at Wrest. She appears to have a bottle in her pocket and to be carrying a small medicine bottle and some medical equipment 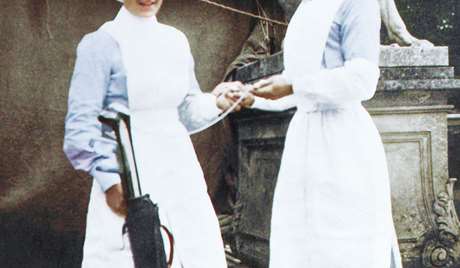 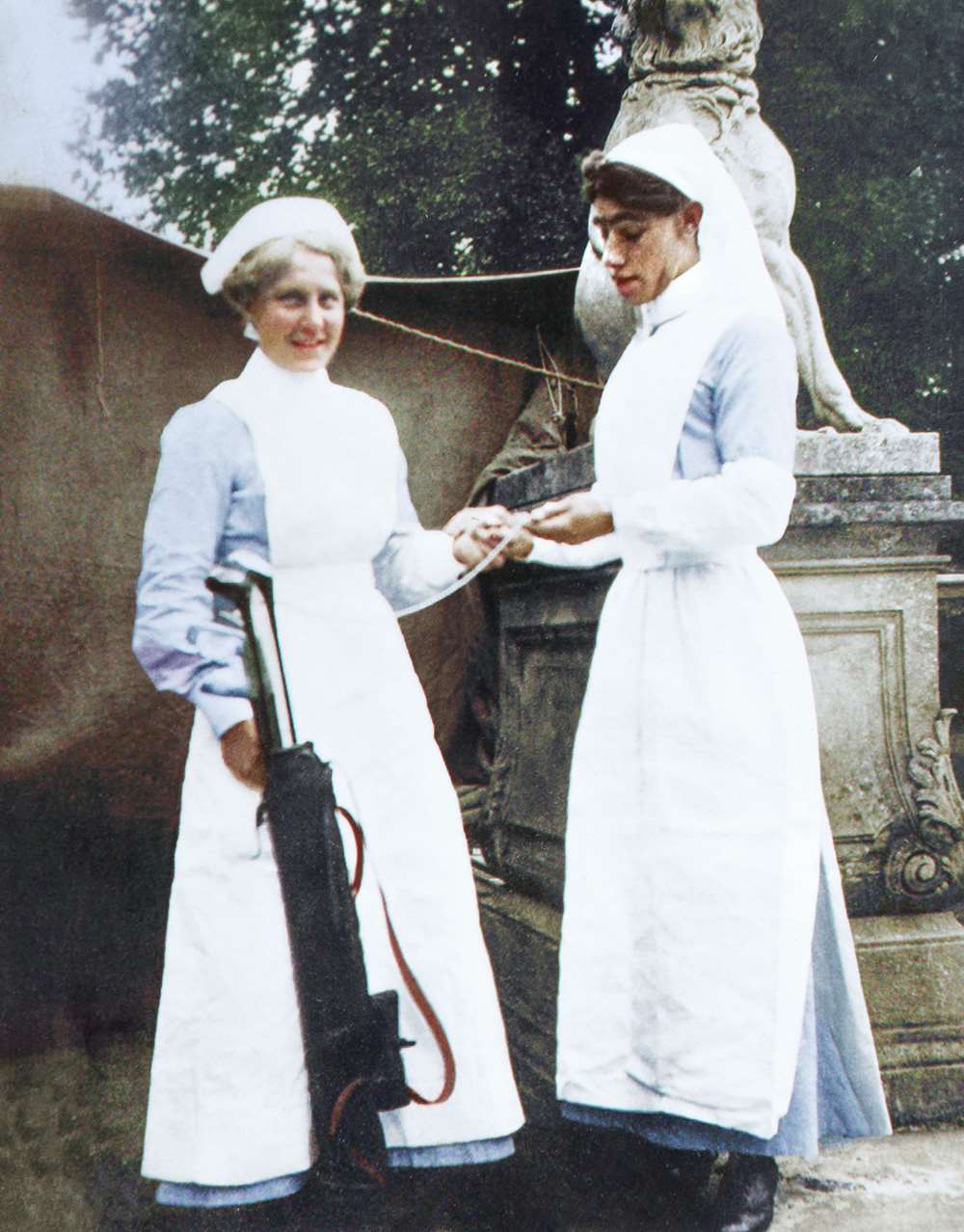 Nurse Cockburn with one of the hospital patients dressed up as a nurse. Many of the soldiers enjoyed dressing up in costume for parties and theatricals. 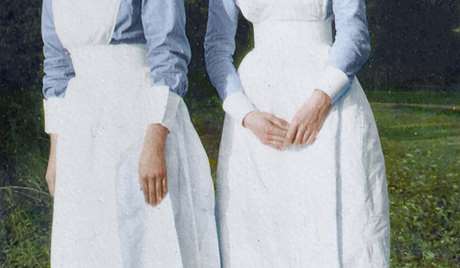 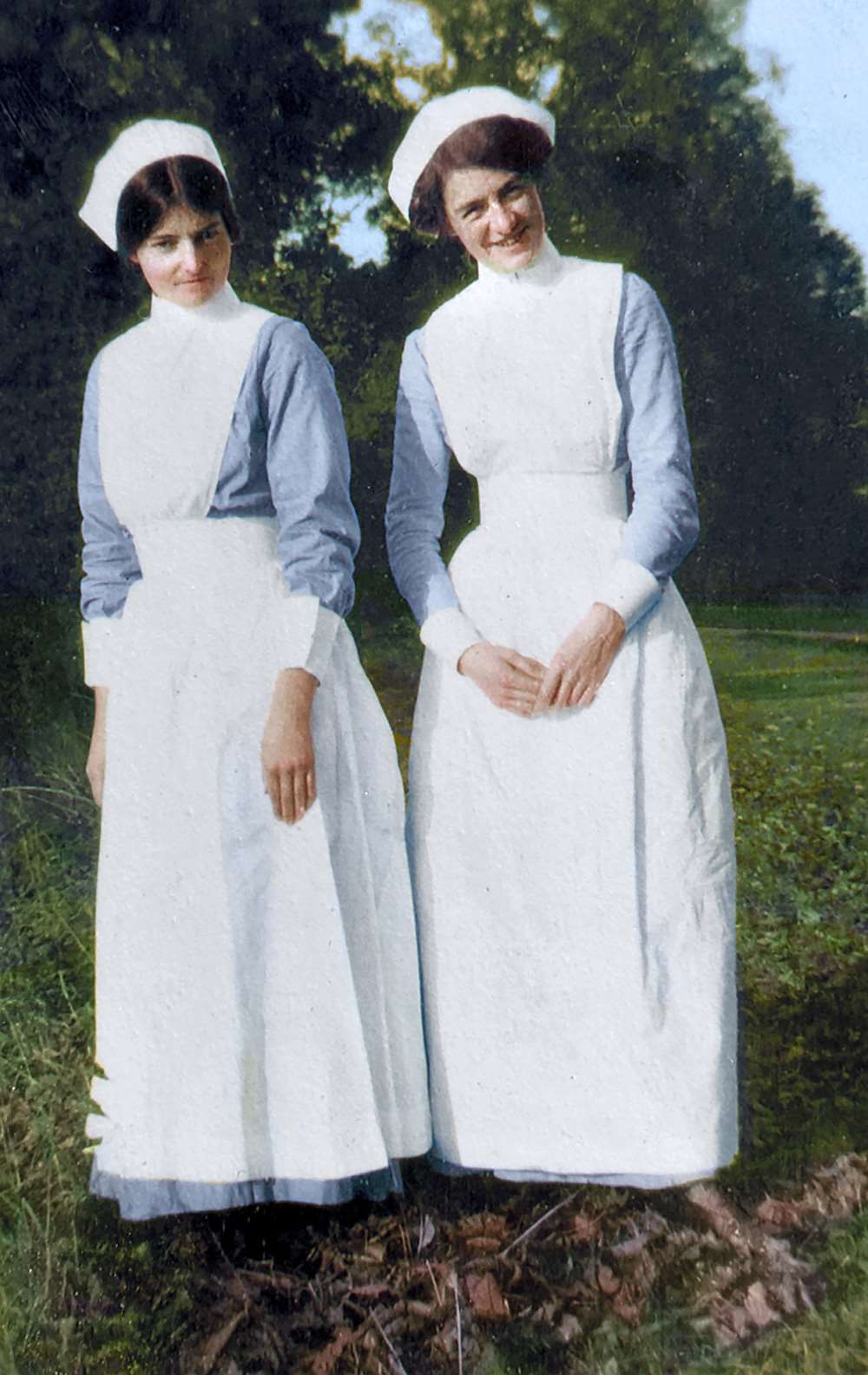 Two nurses, Nurse Wilcox on the right. The plain cap worn by both nurses distinguished them as volunteers. Trained military nurses, in contrast, wore a floating triangular veil.
Nurse Ridley was one of the Wrest Park nurses with an aristocratic background – she was the daughter of the Russian Ambassador, and a friend of Bron and Nan Herbert.
© Image from a private collection

From All Walks of Life

Nursing brought together women from all levels of society, working and socialising with people they would otherwise never have met.

Some of the recruits had a wealthy background. Nathalie Ridley was daughter of the Russian Ambassador, Count Alexander Benckendorff whom both Bron and Nan had known for many years. She had enrolled as a Nurse Probationer at the Metropolitan Hospital at the outbreak of war despite having two young children. Others, such as Eileen Strode and Gwendolen Dorrien-Smith were the daughters of aristocrats.

Edith Taylor, in contrast, was an experienced career nurse, who had trained at Great Ormond Street Hospital, and was working as a fever nurse at Woolwich Military Hospital when war broke out. She had spent time nursing in Australia and had a certificate in midwifery as well as nursing.

Group of soldiers and nurses on the terrace at Wrest in the spring of 1915. Sister Ife, who was responsible for A-Ward is the nurse furthest of the left, Nurse Cook is second from the right.
© Private collection

Sybil Cockburn was more typical of the middle class women who joined Voluntary Aid Detachments (VADs) to contribute to the war effort. She was a married woman, aged 39 in 1914, whose husband was a brewer in Baldock, Hertfordshire. After leaving Wrest she was a sister, then matron at the VAD Hospital in Royston, Hertfordshire.

Others, like the ward assistant Jeanie Webb and orderly Frank Hucklesby had a solidly working class background. Then there was Nurse Butler, ‘an elderly Irish woman with wild blue eyes’. She became infamous for improvising the patients’ favourite game, Shooting the Dardarnelles, where ‘one of the wheel-chair men’ had to ‘make his way down the length of the ward, whilst all the bed patients opened fire on him with slippers, pillows or anything else available.’

Nurse Catherine MacIver (centre) pictured in the 'Loyal Lewis' Roll of Honour. Scottish First World War rolls of honour contained listings of casualties and those who died while on active service
© National Library of Scotland

Recruits came from far and wide. Catherine MacIver hailed from the Hebrides. She had been the first nurse appointed to Lewis Hospital in Stornoway, and was working as a district nurse in Kenmore, Perthshire before arriving at Wrest.

Kathleen Adair was from County Carlow in Ireland and came to Wrest from the South Devon and East Cornwall Hospital in Plymouth, whilst Gwendolen Dorrien-Smith was from Tresco Abbey on the Isles of Scilly.

There were even recruits from overseas, like Ellen Dobbie from Auckland, New Zealand and Lois Windeyer, who was Australian.

Wrest Park Hospital’s operating theatre was housed in the first floor bedroom over the entrance hall on the north side of the house.
© Private collection

Detailed research has allowed us to tell the stories of some of the Wrest Park nurses, but there are many for whom we have no record, or just a name. We are calling for help from members of the public to help us identify these unknown women who made such a vital contribution.

'Being able to identify these nurses would help us better understand life at Wrest during the war, and the important role that women and country houses played in supporting the effort at home. It would be wonderful if the public could help us identify these forgotten women.'

Do you recognise any of the nurses in the photographs in this article? Do you know more about the lives of the women we have named? Are you aware of a family member who worked at Wrest Park during the First World War? If so, Wrest Park’s Volunteer History Team would love to hear from you.

The end of an era

Wrest Park’s life as a hospital came to an abrupt end on 14 September 1916 when the mansion was badly damaged by fire. All 156 patients were safely evacuated, but the damage was so serious that it was not practical for the hospital to be reopened.

After leaving Wrest these women went their separate ways. After her brother’s death in November 1916, Nan Herbert succeeded to his titles becoming Baroness Lucas of Crudwell and Lady Dingwall. She sold Wrest Park in 1917, and, in the same year, married Lt-Col Howard Lister Cooper.

Nathalie Ridley helped her mother set up a benevolent fund for Russian soldiers, Sibyl Cockburn went back to her family in Hertfordshire, whilst Edith Taylor carried on in nursing until her retirement.

The hospital at Wrest Park was staffed by a diverse group of people, but for the short time they were there they shared the same experiences, the regimented routine and hard graft – but also the lighter moments and camaraderie. It would be an experience that few of them would ever forget.