Sir Arthur Harris served as a pilot in the Royal Flying Corps (RFC) during the First World War, and as an officer in the Royal Air Force (RAF) from 1918 to 1946. He was a senior officer throughout the Second World War, most notably in charge of the RAF’s Bomber Command (1942–6). He made Bomber Command into a force capable of large offensive operations against Axis targets, especially by large-scale strategic bombing. From 1943, Bomber Command cooperated with the 8th United States Army Air Force and together they formed the most powerful air strike force of the era.

Faith Winter’s statue of Harris was erected outside St Clement Danes Church in 1992 as a memorial to him and over 55,000 men of Bomber Command who lost their lives in the war. 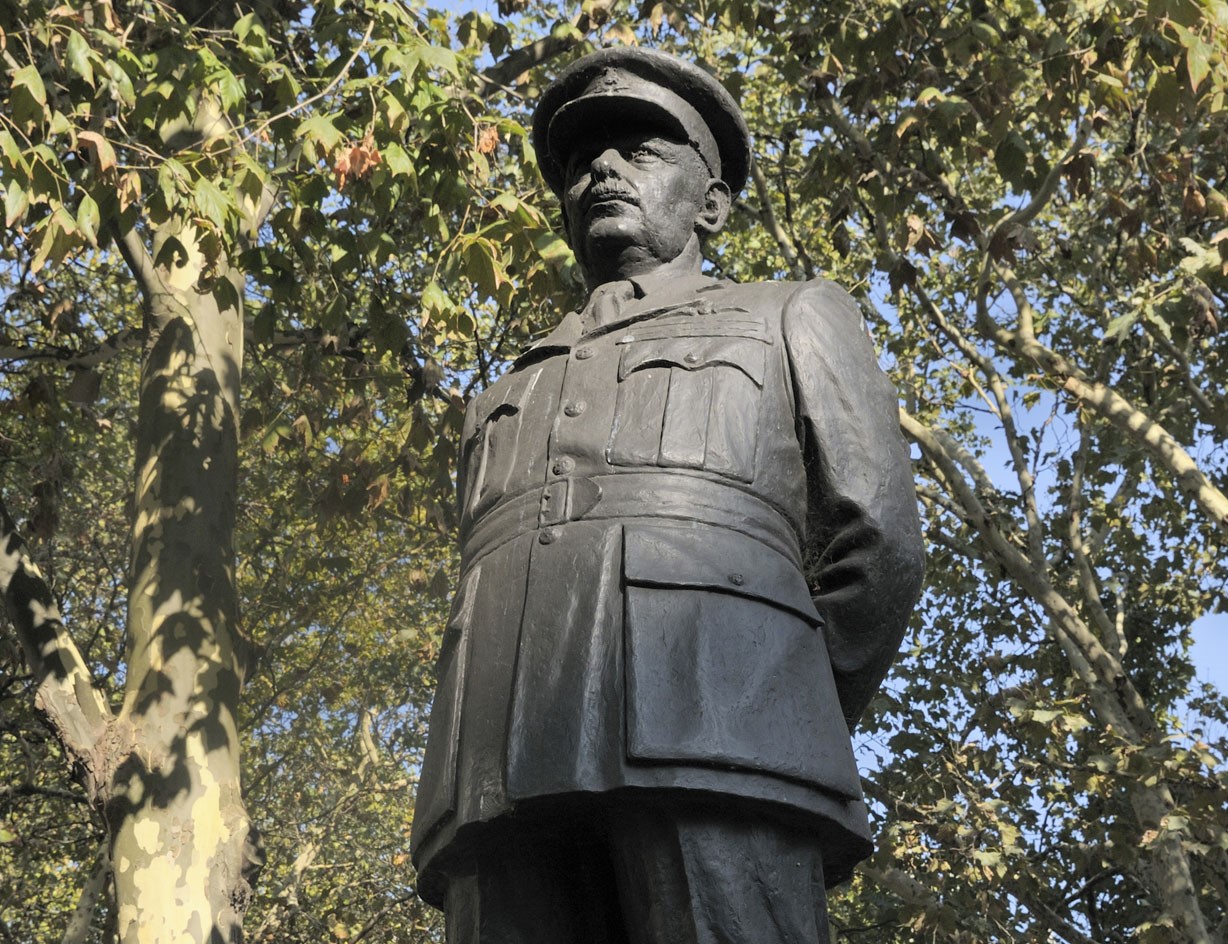 From late 1915, Harris was a fighter pilot in the RFC, gaining five ‘victories’ (enemy aircraft destroyed) in France. In 1918, as a squadron leader, he transferred to the newly formed RAF, and later served in India, notably in Waziristan (now in Pakistan) during a campaign against a major tribal uprising (1921–2). Later in 1922 he was in Iraq, successfully flying the Vickers Vernon aircraft to support ground troops fighting Turkish and Kurdish forces. This included their improvisation as bombers, large-scale troop transport and casualty evacuation. He also pioneered night flying, target marking and accurate aerial bombing, emerging with a reputation as an efficient, innovative commander.

Back in England, in May 1925 Harris took command of a heavy bomber squadron (No. 58) at RAF Worthy Down, Hampshire, and his continued innovation and leadership contributed to his promotion to Wing Commander in July 1927.

As a Group Captain between 1933 and 1937, Harris had a desk job at the Air Ministry, part of a small team that developed air policy and the RAF expansion programme in the light of a growing German threat. Harris promoted the creation of a heavy bomber force to counter the expected German air offensive. From 1936, British re-armament began in earnest, and in 1937 came the formation of Bomber Command.

In May 1937, Harris returned to operational service in command of No. 4 (Bomber) Group – officially titled ‘Air Officer Commanding’ (AOC). After a short trip to America in April 1938 on a mission to procure aircraft, he went to Palestine (1938–9) during the Arab Rebellion. Here, as the AOC, he developed a policy of containment of enemy forces by bombing, to give time for ground troops to arrive.

By July 1939, aged 47, Harris was back in England, and at the outbreak of the Second World War in September, took over as AOC 5 Group, one of five subdivisions of Bomber Command. Harris held this command until November 1940 and cemented his reputation as a leader who made vigorous efforts to improve the aircraft and conditions for staff in his command.

After another posting at the Air Ministry, and briefly as a liaison officer in the USA, Harris was appointed as AOC for all of Bomber Command in February 1942. He inherited a dispirited force, ill-equipped for its purpose. Slowly, systematically but doggedly in a climate where resources were fiercely contested, Harris improved everything, including the numbers and types of aircraft and the detailed operational training needed. Though like many senior officers he was seemingly aloof, stiff, and abrupt, he appears to have inspired great loyalty and respect from those who served him. Sir John Curtiss who served in Bomber Command during the Second World War later recalled of Harris:

…very few of us ever saw the man. But somehow his personality and his determination...he got across to us the feeling that if he asked us to do something, it was something that was really necessary to be done, and so we did it cheerfully.

Bomber Command’s roles included minelaying, support of ground and sea forces, and bombing of military, industrial and economic targets. These included aircraft, munitions and ball bearing factories, transport infrastructure such as railways, marshalling yards and canals, and oil refineries. It also carried out specialist tasks – for example, the Dambusters Raid against reservoir dams in the industrial Ruhr area of Germany, assaults against V1 and V2 rocket sites, and massed attacks prior to and during the D-Day landings in June 1944.

But its biggest effort was in the bombing of German industrial cities, on occasions deploying over 1,000 aircraft, to destroy factories, resources, infrastructure, and workers’ housing. The aim was to reduce Germany’s ability to fight and to break the morale of its people. The programme became known as ‘area bombing’ as, for most of the war, technology did not enable high precision, especially when cloud often obscured the targets. In some raids, bombing caused firestorms and massive loss of civilian life, as in Hamburg in 1943 (45,000 casualties) and Dresden in 1945 (25,000 casualties).

Harris was unequivocal, blunt and uncompromising, remaining certain that the bombing of German cities would bring the war to an early close, even debating with senior staff to persuade them he was right. This strategy became controversial among senior officers and in government circles in 1945, as the war in Europe approached its end. Some, more senior than Harris, continued to support it; others thought that it was no longer necessary. A few who had supported the policy now wanted distance. Harris became the focus of criticism almost immediately because he was consistent and vociferous in the belief that targeting industrial cities would shorten the war and save lives. However, the strategic bombing of German cities was not initiated by him: it was a British War Cabinet decision, taken before Harris took over at Bomber Command, and in the aftermath of the Luftwaffe’s devastating bombing of Britain.

As part of Allied strategy, it may have shortened the war but not by breaking German morale or ending warlike production. It was effectively a second front that diverted enemy production onto defensive measures – anti-aircraft guns and fighters – thereby removing vital resources from the war on the ground.

Harris’s statue was commissioned in 1989 – five years after his death – and was completed in 1992, the centenary of his birth and the 50th anniversary of his taking over Bomber Command. It was also intended to be a tribute to more than 55,000 men of Bomber Command who lost their lives in the war. The idea for the statue had originated in a conversation between Group Captain Ken Batchelor, Chairman of Bomber Command Association, and the President of the RAF, Sir Michael Beetham, while they were leaving St Clement Danes and passing the statue of Fighter Command’s leader, Lord Dowding. The Harris statue was commissioned for the same site.

The sculptor chosen was Faith Winter, who had made the Lord Dowding statue. The two figures stand outside the church of St Clement Danes, which had been gutted by incendiary bombs in 1941. It was rebuilt and re-consecrated in 1958 as a perpetual shrine of remembrance to those who have died in service in the RAF.

For the Harris commission, the architects were Tony Hart and Mike Goss and the statue was cast at the Burleighfield foundry. Funding for the project (about £100,000) was provided by members and benefactors of the Bomber Command Association.

Faith Winter (1927–2017) had trained as a sculptor at Guildford and Chelsea Schools of Art, and exhibited at the Royal Academy from the age of 19 but only became a sculptor full time in her 40s. Commissions for statues came from both the military and the royal family (Winter sculpted a bust of Princess Anne and another of Princess Diana and William as a baby). Winter’s husband, Colonel Freddie Winter, was an army man, and her work centres around contrasting themes of martial dignity and childhood innocence.

Harris’s family were pleased with the statue, and gave Winter his silver shaving bowl as a token of their appreciation. She portrayed Harris in RAF uniform, holding his gloves behind his back. The enormous bronze statue embodies qualities of strength, determination and bulk – yet a photograph of Harris among his men, in a similar pose, shows a more unassuming and informal side to his character. Winter was reported to have said that she tried to show a man ‘who absolutely hated what he felt obliged to do’.

On the stone pedestal Harris’s rank and dates are given, together with an inscription dedicating the statue:

In memory of a great commander and of the brave crews of Bomber Command, more than 55,000 of whom lost their lives in the cause of freedom. The Nation owes them all an immense debt. 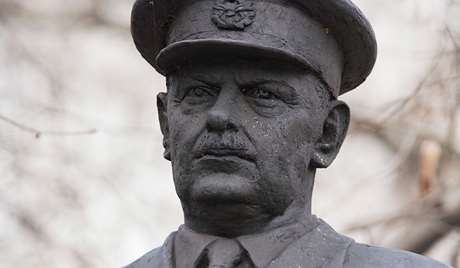 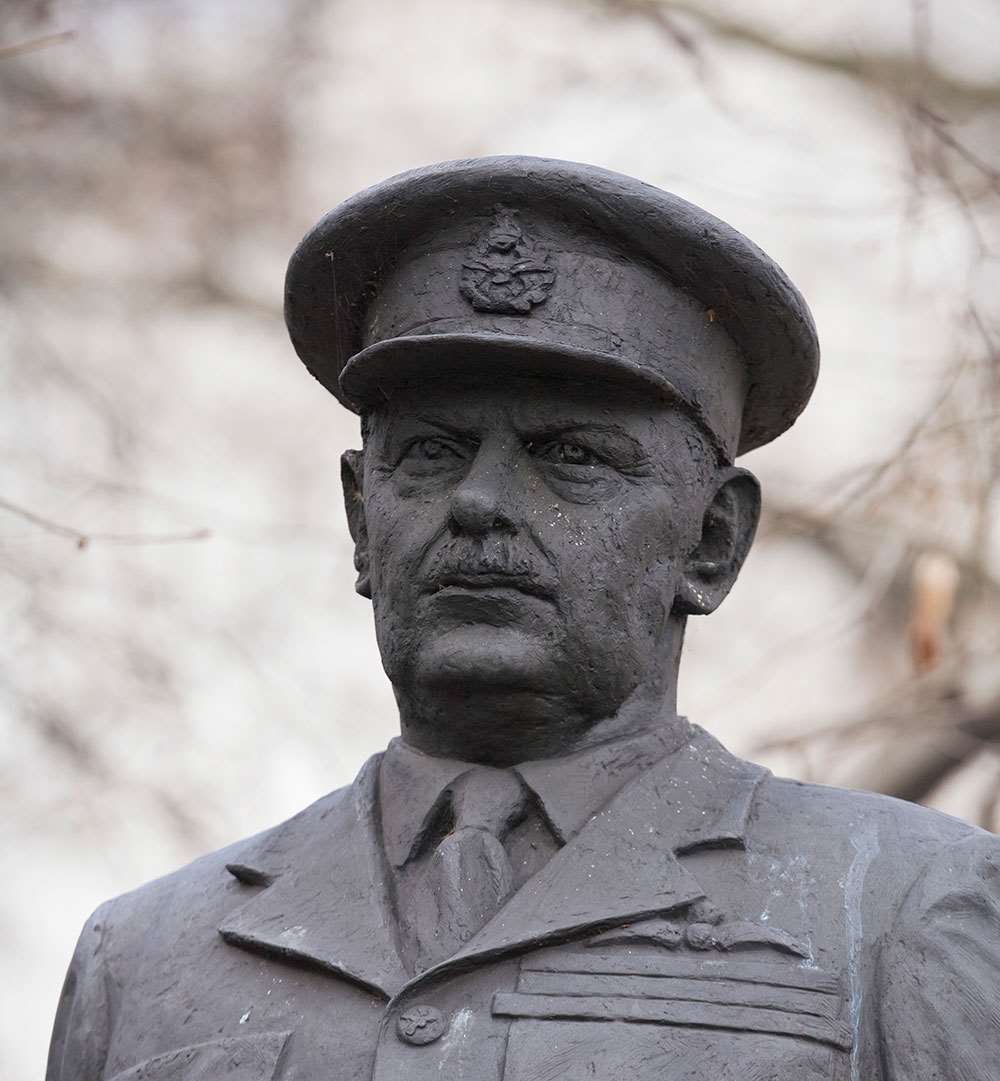 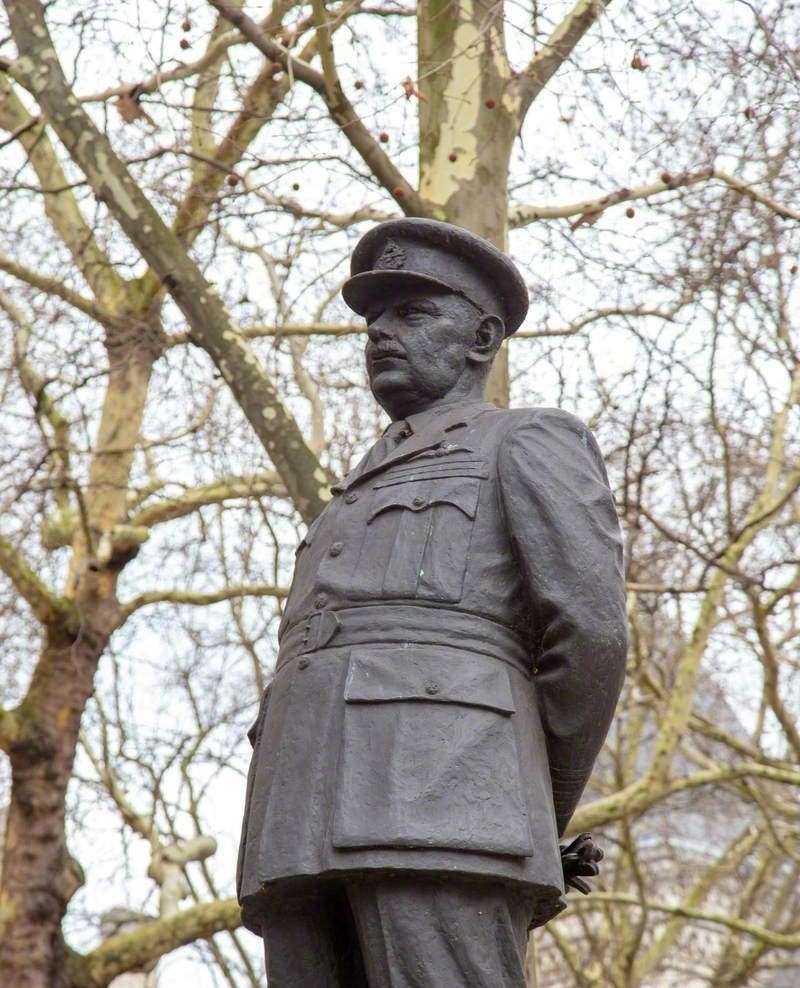 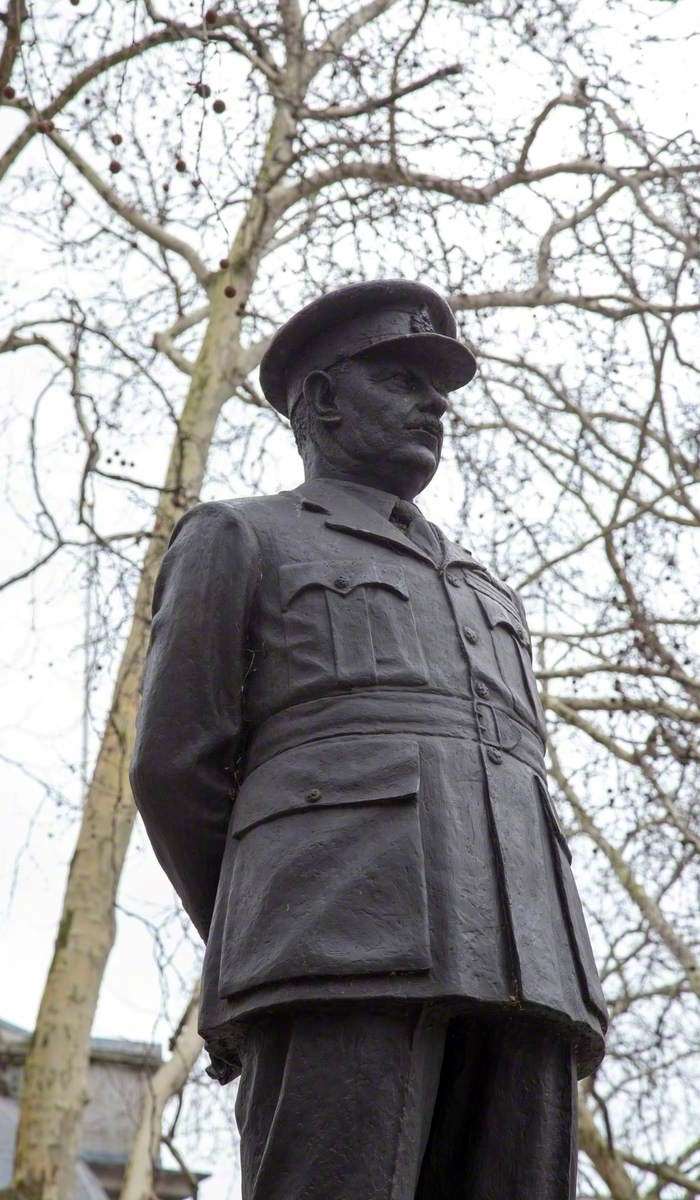 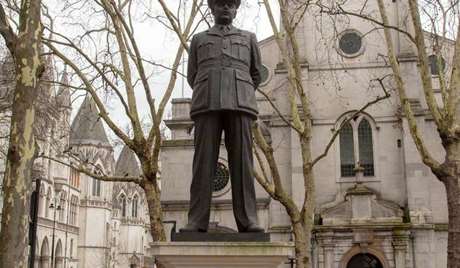 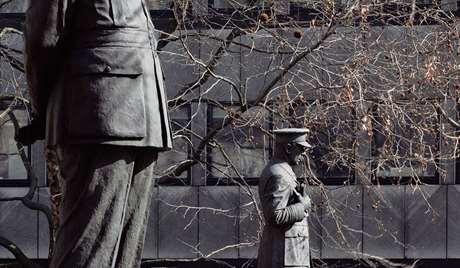 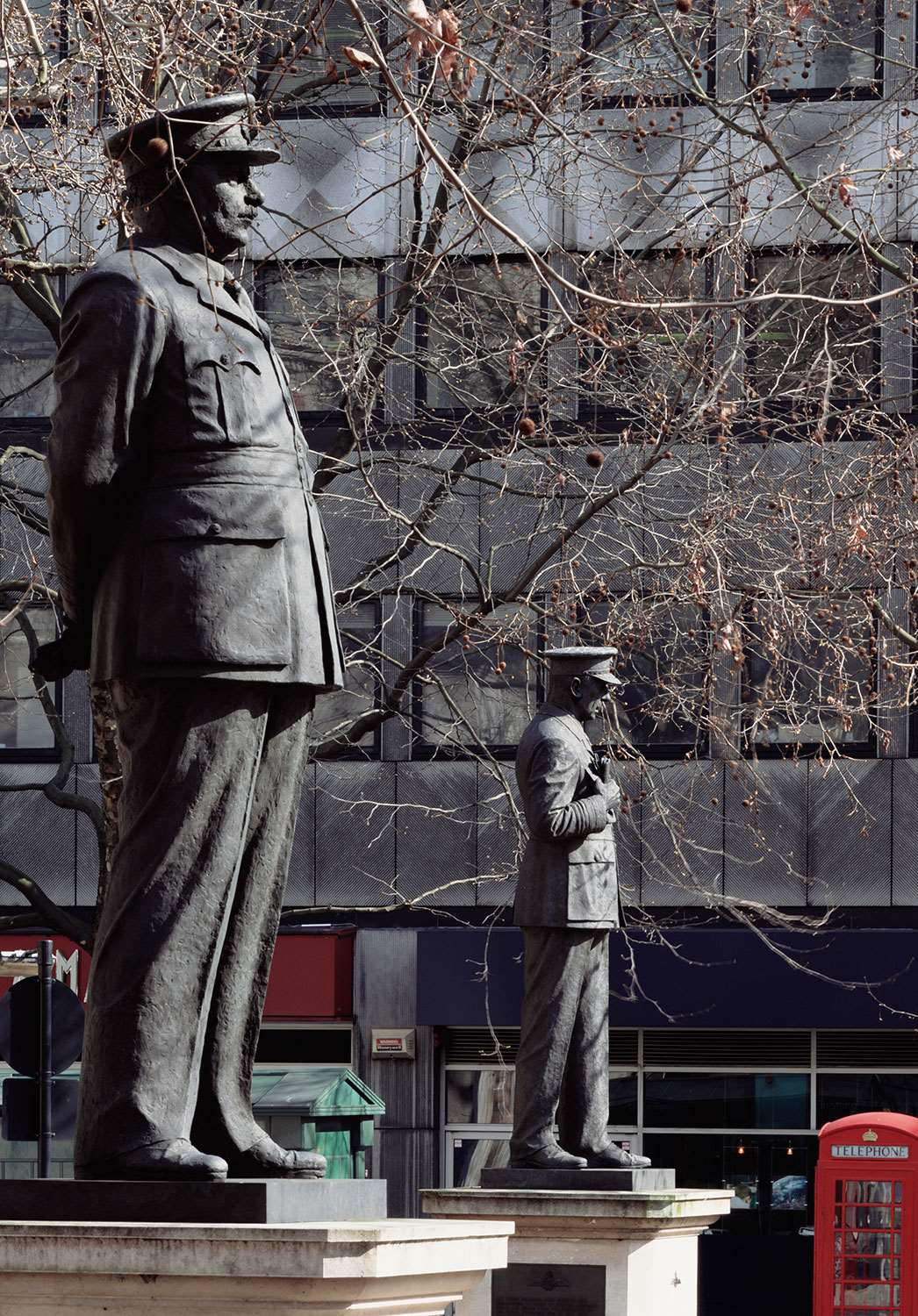 The statue was unveiled on 31 May 1992 by Queen Elizabeth, The Queen Mother. There were protests at the unveiling and the statue and plinth were sprayed with red paint and the word ‘Shame’ in October that year. There were renewed debates over the statue in 2020 and some have called for its removal. However, there has also been support for it from veterans, service personnel and their families.

One side holds that the bombing of German cities, with large numbers of civilian casualties, was a war crime. The other regards it as a legitimate response to the ‘total war’ initiated by the Nazis and their targeting of civilian cities in Europe, including many in Britain. Without Allied bombing, it is argued, the war would have lasted longer, with more lives lost. Such polarised opinions about Harris seem irreconcilable, and modern judgement is made difficult by our increasing distance from wartime conditions and from the people who endured them.

The statue remains outside the RAF church of St Clement Danes on the Strand, Westminster. It stands close to Winter’s other statue of an RAF officer, Air Chief Marshal Hugh Dowding.

Use the map below to explore more London statues and monuments in our care.