Lord Burlington, the architect and owner of Chiswick House, was known as the 'Apollo of the Arts'. He was one of 18th-century Britain's greatest patrons and art collectors. He filled his villa at Chiswick with paintings that were hung so densely as almost to obscure the velvet wall hangings. A selection of his original collection can still be seen at Chiswick House today, alongside complementary paintings, family portraits and painted views of the house and garden.

Burlington's friend and collaborator William Kent designed furniture specifically for the house. The collections include his mahogany and gilt chairs and a spectacular pair of marble-topped tables, which enhance the richly gilded interiors.

A new generation brought a change in taste. Burlington's grandson the 5th Duke of Devonshire and his wife, Georgiana, furnished the house to reflect their Anglo-French, neoclassical style. An impression of lightness and elegance is created by the painted and gilt French furniture now on display in the dedchamber at Chiswick House.

William Aikman was a leading Scottish portrait painter and he was commissioned by Lord Burlington to paint a series of family portraits. This oval portrait and a similar portrait of Lady Burlington's sister, Mary, are fitted above the doors in the bedchamber at Chiswick House. Lady Burlington was involved with furnishing the interiors at Chiswick and she was an accomplished artist in her own right. 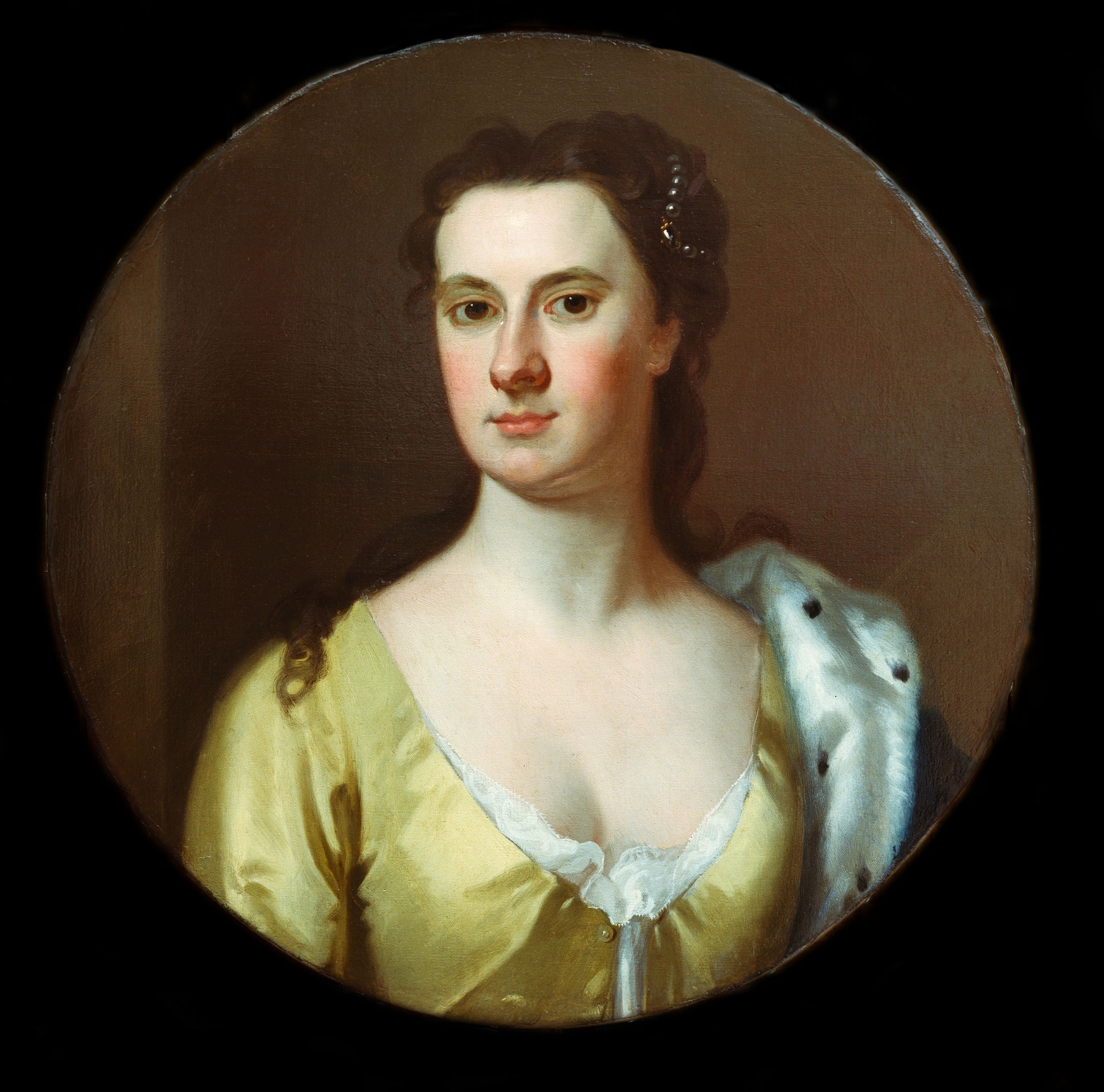 This is one of a pair of large vases made from an extremely hard purple volcanic rock known as 'Imperial Porphyry'. In 16th-century Italy, broken Roman columns and sculptures made from this highly prized material were re-used to create new pieces such as these vases. The vases were purchased by Lord Burlington on 4 February 1715 while he was visiting Italy as part of his Grand Tour of Europe. 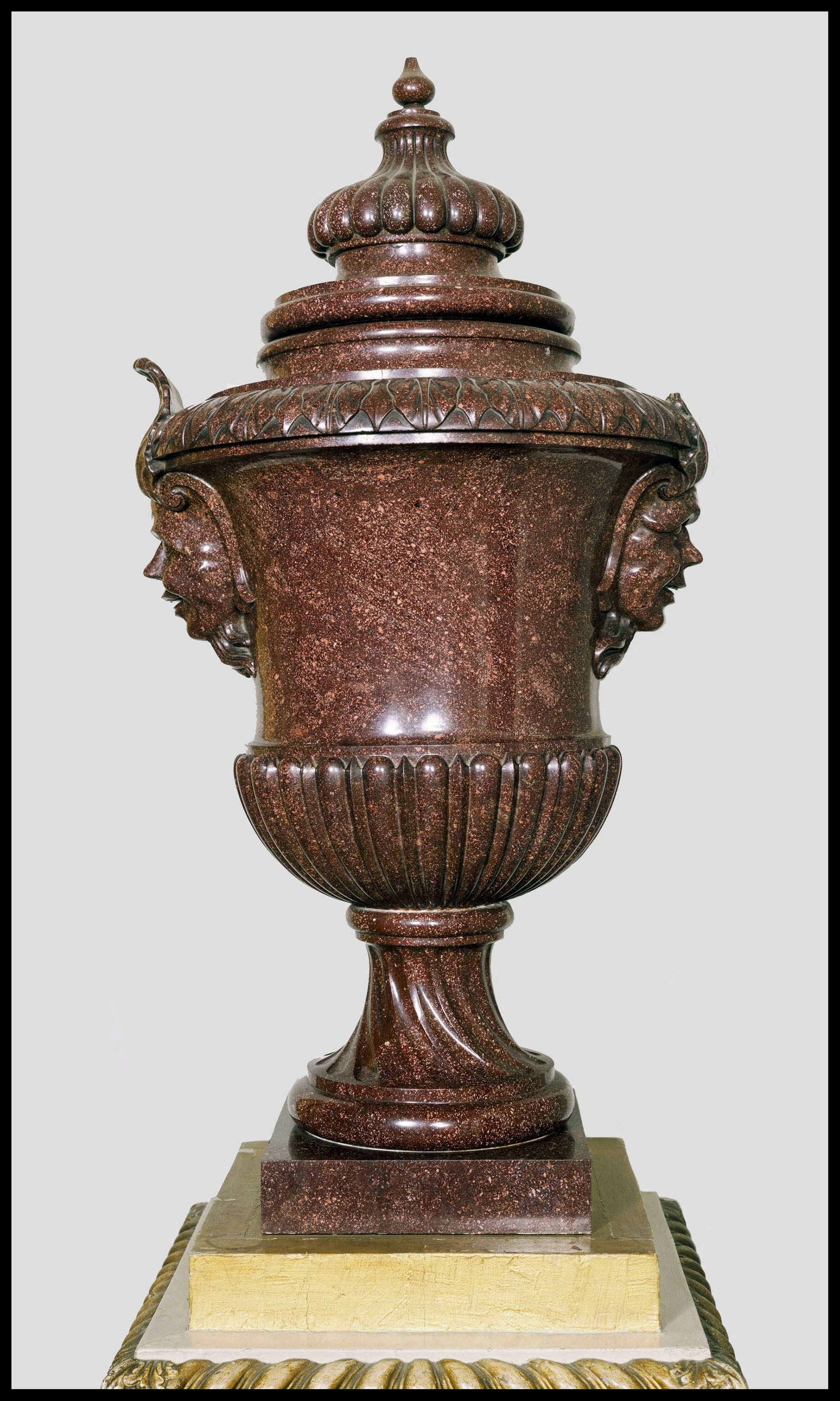 The base of this table is boldly carved with motifs associated with the sea. Sea nymphs support the corners of the table, and the mask of Neptune, god of the sea, is at the centre of the base. A chubby putto, balancing on a scallop shell, embraces Neptune and drapes him with swags of oak leaves. These sea motifs re-occur throughout the interiors of Chiswick House. 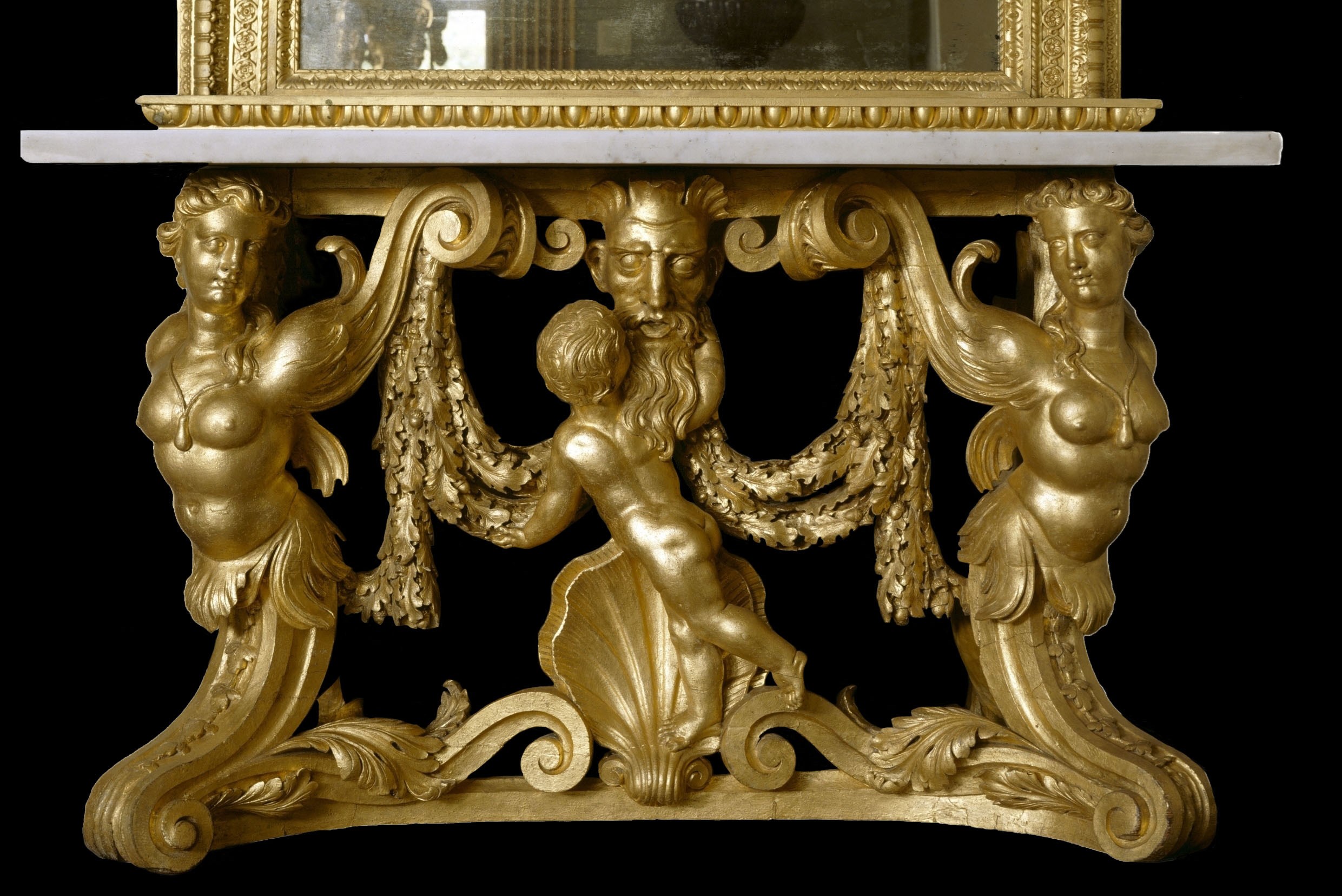 This side chair was designed especially for Chiswick House. It is unusually small, to suit the proportions of the villa. There is a scallop shell on the top rail - a motif which was frequently used by the designer William Kent. The legs are carved with fish scales and there are female masks on the knees. These masks represent Venus, while the decoration refers to her mythical birth from the sea. 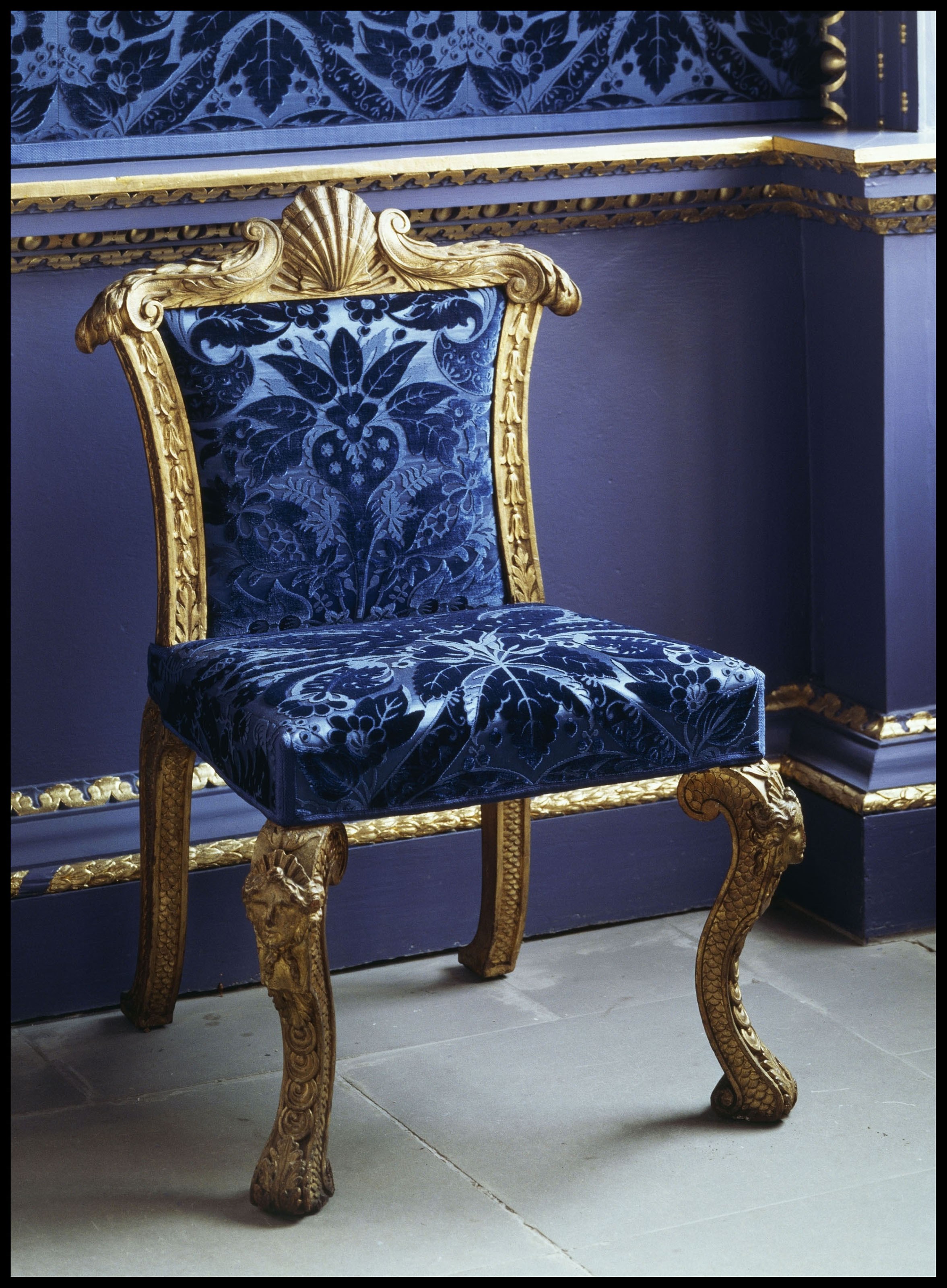 Viviano Codazzi and Michelangelo Cerquozzi - Classical Ruins with the Colosseum

Classical Ruins with the Colosseum

This painting is thought to have been purchased by Lord Burlington during his first visit to Italy in 1714/15. Viviano Codazzi often included recognisable buildings, such as the Colosseum, within his imaginative scenes and employed other artists to add the figures. In 1740 this painting was described as 'Ruins, Viviano, with figures by Michel Angelo', which is probably a reference to the artist Michelangelo Cerquozzi. 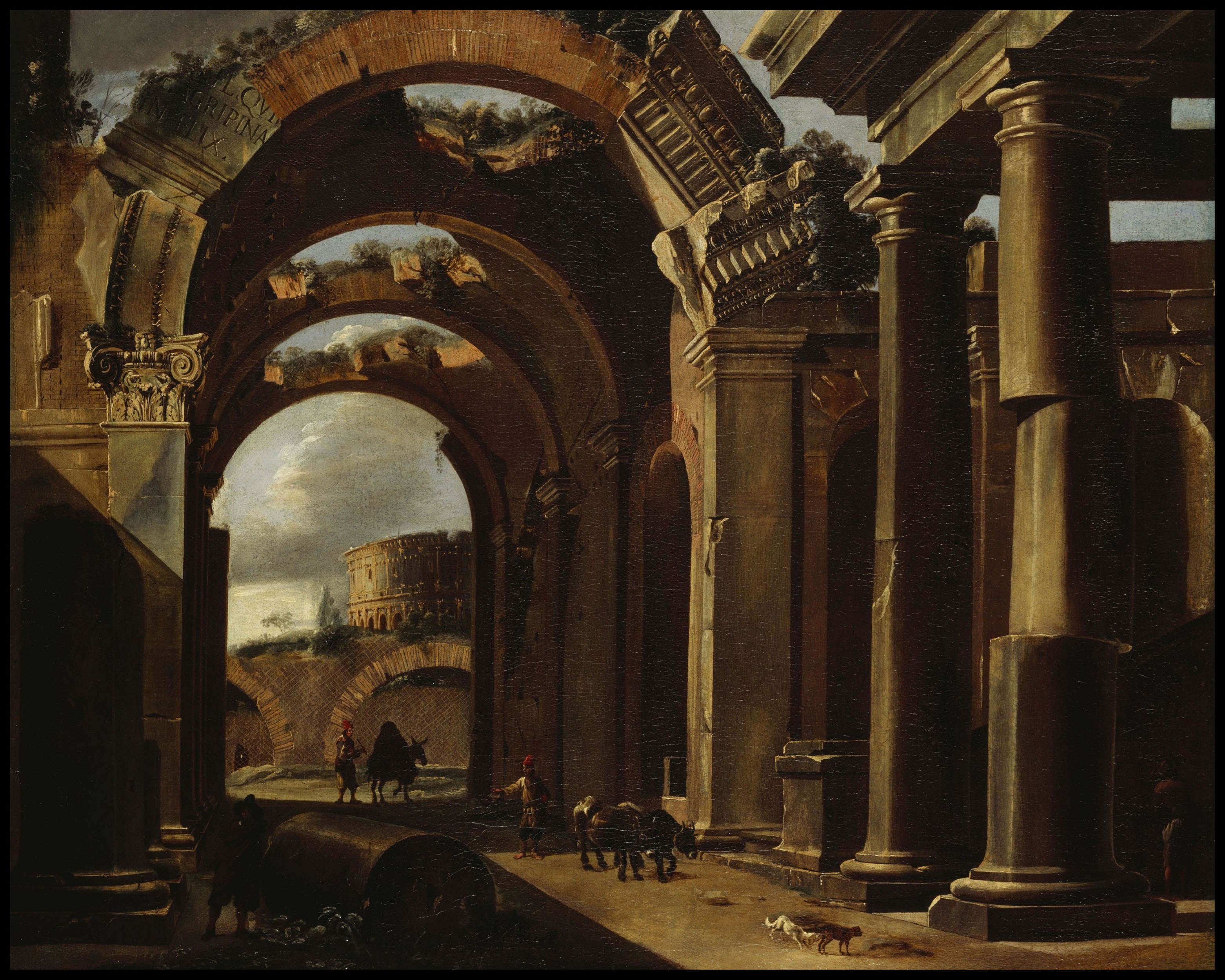 The Venetian decorative painter Sebastiano Ricci created this painting for Lord Burlington's central London property, Burlington House. It was moved to Chiswick when the new house was completed. The frame, designed by William Kent, is inscribed with the date 1729. The painting shows the moment in Classical mythology when Bacchus, god of wine, discovers Ariadne on the Greek island of Naxos, where she has been abandoned by Theseus. 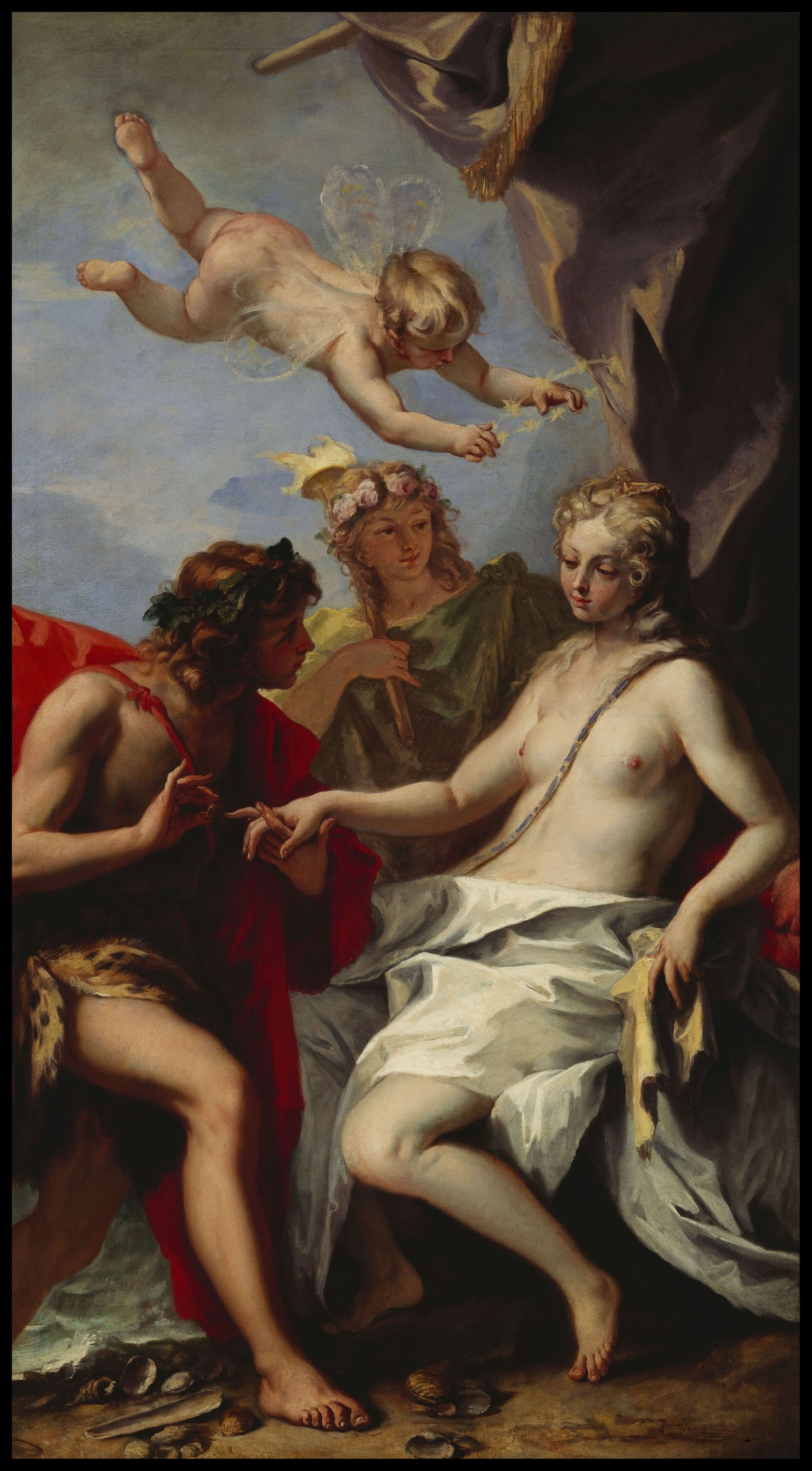 View from the Cascade Terrace, Chiswick

By the time that this view of Chiswick House was painted, the designer William Kent had begun to make changes to the gardens. The painting shows the sweep of lawn between the house and water that had been opened up to create a new, 'natural' style of garden. The painter George Lambert used his artistic licence, as the stone balustrade never actually existed. 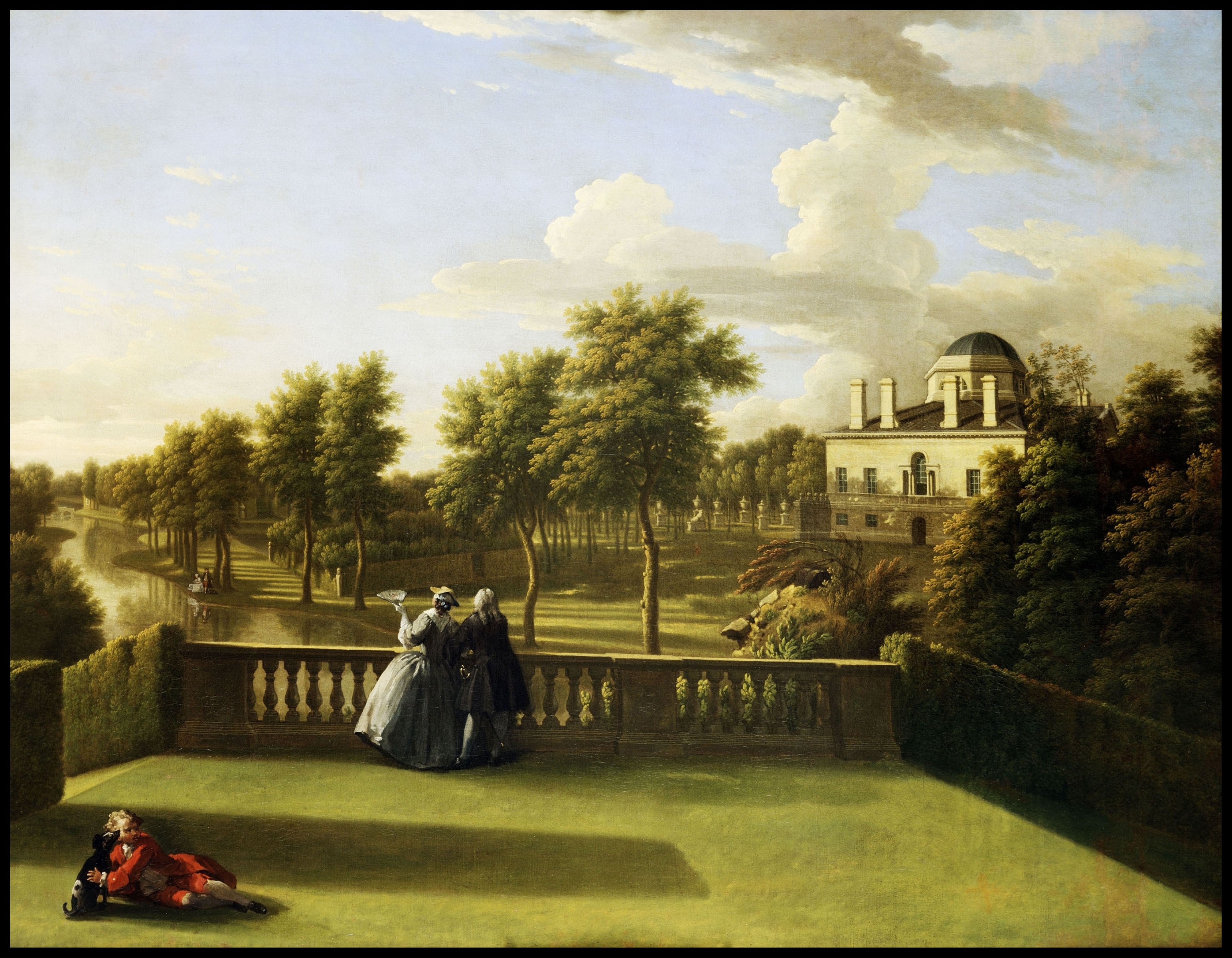 Lady Charlotte Boyle was Lord Burlington's youngest daughter. It was through her marriage to the Marquess of Hartington, later the 4th Duke of Devonshire, that Chiswick House was inherited by the Devonshire family. Charlotte died at the young age of 23. This portrait relates to a larger painting by George Knapton which shows her playing a harpsichord. 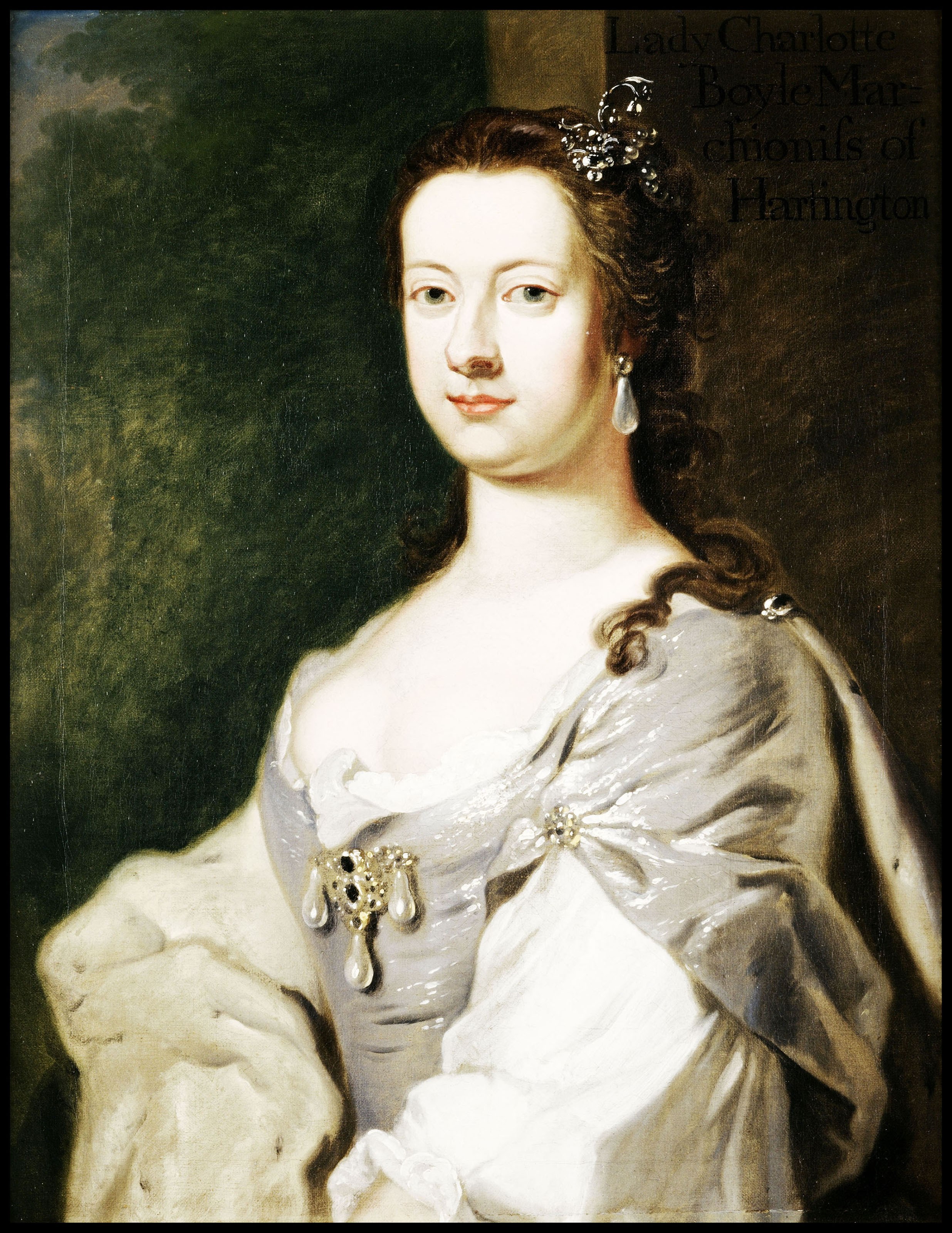 Godfrey Kneller and Jan Wyck - The Ambassador of Morocco

The Ambassador of Morocco

This striking painting was part of Lord Burlington's collection and hangs in its original position in the octagonal domed saloon at Chiswick House. It is a portrait of Muhammad Ibn Haddu, who was sent as an ambassador from Morocco to the Court of Charles II in 1681. He caused a sensation in London and became famous for his displays of horsemanship in Hyde Park. 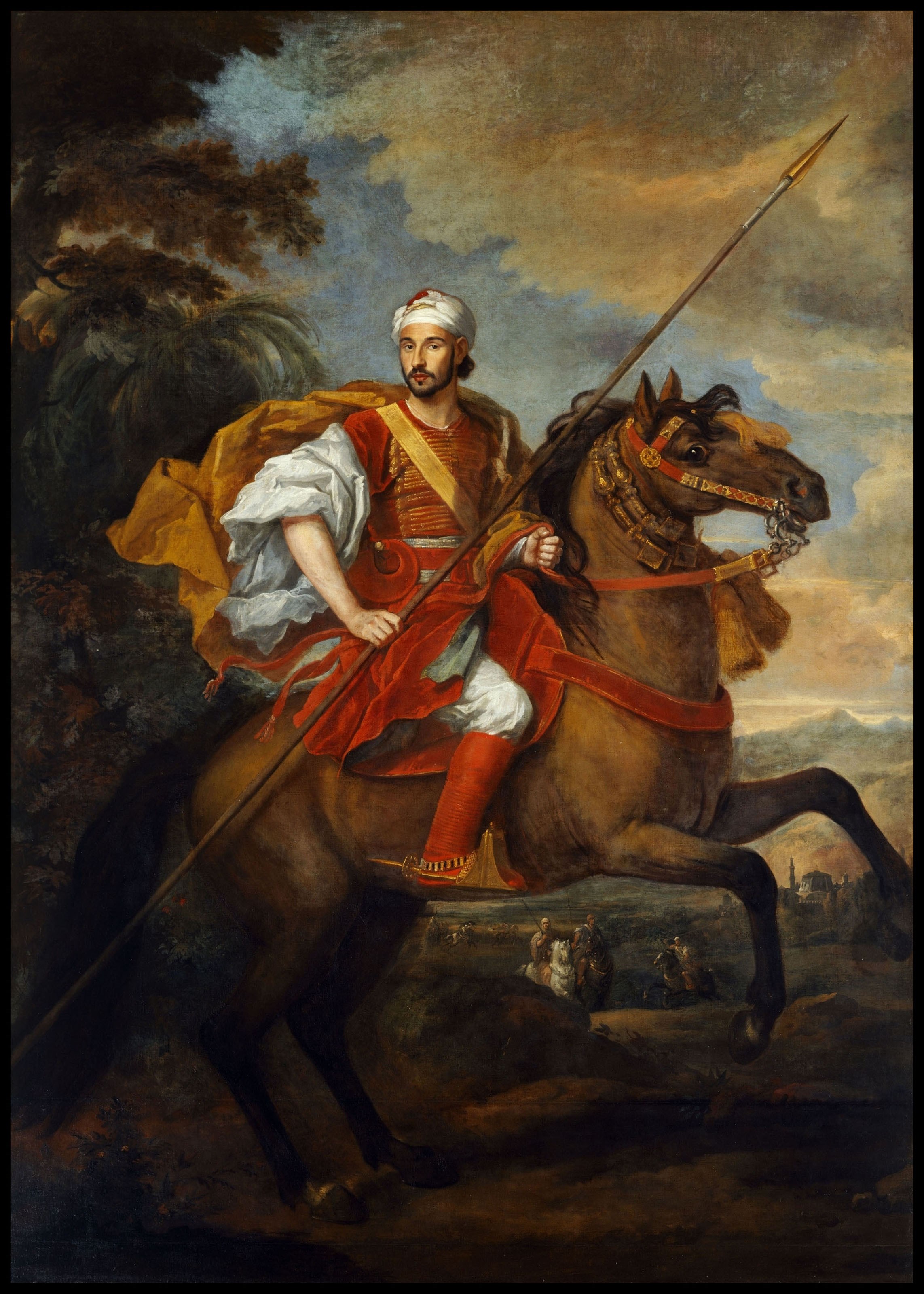 A View of Chiswick House from the South-West

This view of Chiswick House and gardens was commissioned by the house's owner and architect, Lord Burlington, not long after his new villa was completed. It provides a glimpse of the old house, a Jacobean mansion that was demolished in 1788. The painting is part of a larger set that may once have hung at one of Burlington's other houses as a reminder of Chiswick when he was away.

Purchased 2007, with assistance of the National Heritage Memorial Fund, the Art Fund (with a contribution from the Wolfson Foundation), the London Historic House Museums Trust, the Chiswick House Friends and private individuals. 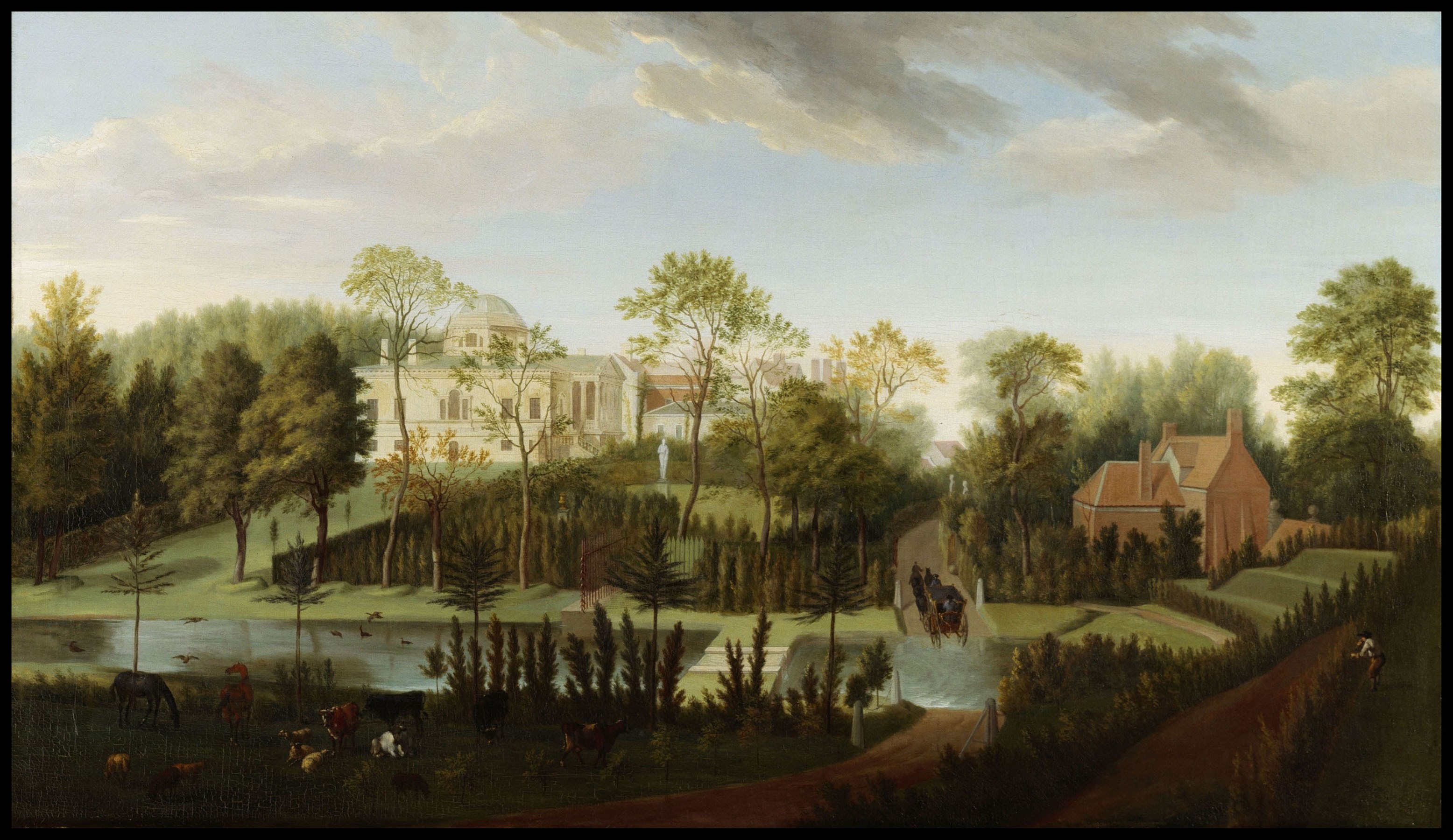