Down House was the home of Charles Darwin for 40 years. With his wife, Emma, and ten children, Darwin shaped an environment where he could both live comfortably and also develop and write his groundbreaking scientific theories. Flair and fashion were not key considerations for the Darwins when they furnished their home. Most of the furniture was chosen for its comfort and durability rather than style. Much of the rest was inherited.

A significant amount of this original furniture still remains at Down House today. It indicates that Down was a comfortable family home.

Charles Darwin’s life and career are also represented by the extensive array of personal artefacts and scientific paraphernalia that form the Down House collection. These include an assortment of instruments and notebooks from his Beagle voyage, various specimens from his studies at Down, and correspondence between Darwin, his family and friends. All of these help to form a valuable insight into a fascinating individual and his family.

English Heritage have collaborated with the Darwin Correspondence Project at Cambridge University Library to digitise three important collection items: two lavish albums containing photographs of scientists and naturalists in the Netherlands and Germany, which were presented to Darwin on his 68th birthday in 1877, and a photograph of another admirer, the Bohemian engineer Carl Kraus, who sent the image to Darwin on his 69th birthday in 1878.

Antoine François Jean Claudet - Daguerreotype of Darwin with his Son

Daguerreotype of Darwin with his Son

This early Daguerreotype was produced in 1842 - the year Darwin and his family replaced the clamour of London with the calm of Down. It shows Charles with his first child, William Erasmus. Demonstrating his affectionate nature, it is the only known image of Charles with one of his children when they were young. Daguerrotypes were some of the first widely produced forms of photographs and were popular from the 1840s. 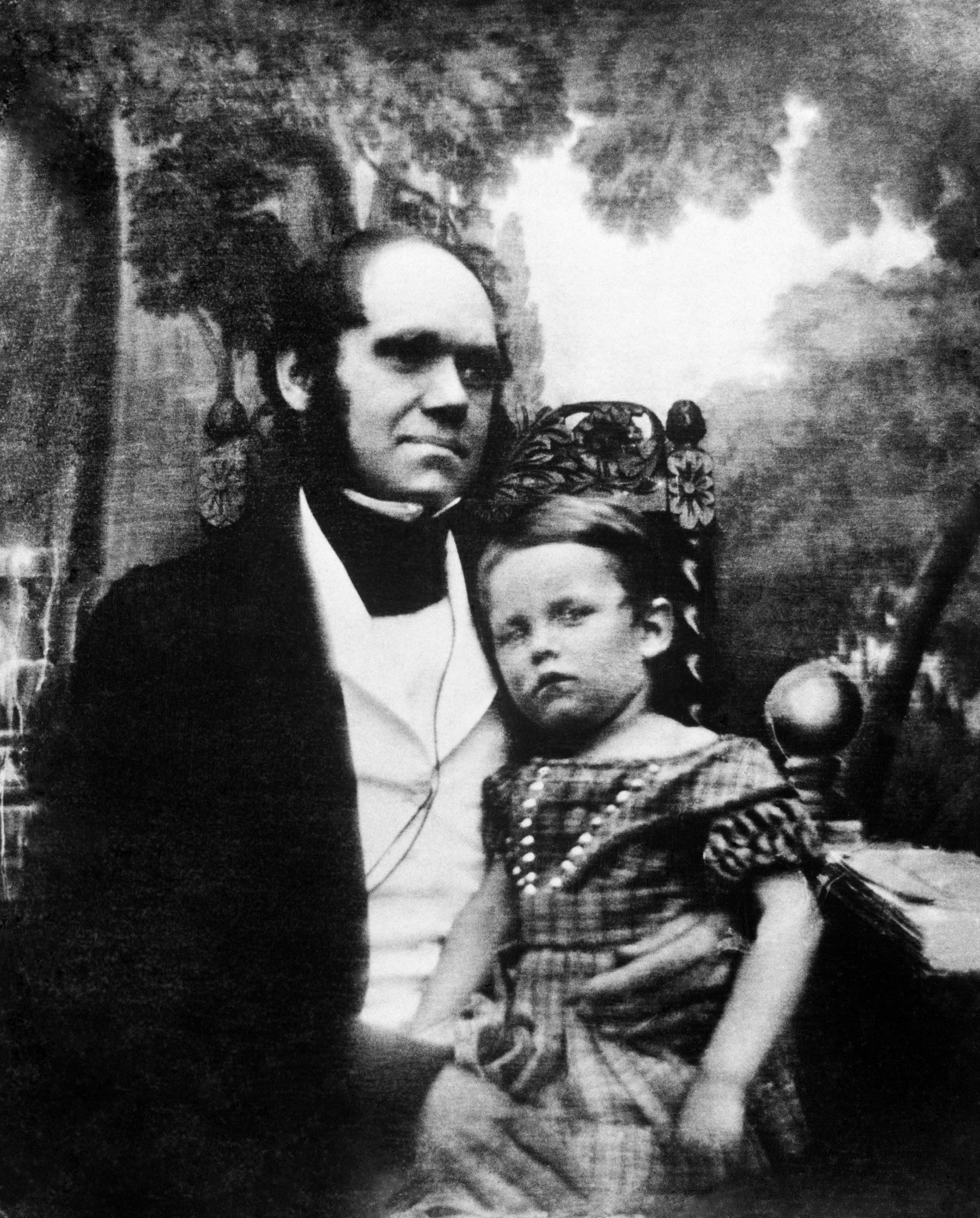 Production of this Water Lily (or Nelumbium Nucifera) pattern service in 1808 was probably the first time that the Wedgwood factories had employed the technique of underglaze printing. It is also the first time that Wedgwood used specific botanical images, copied from the periodical Botanist's Repository. This particular service was made for Charles Darwin's parents, Robert and Susannah Darwin. It was given to Charles and his wife, Emma, as a wedding gift. 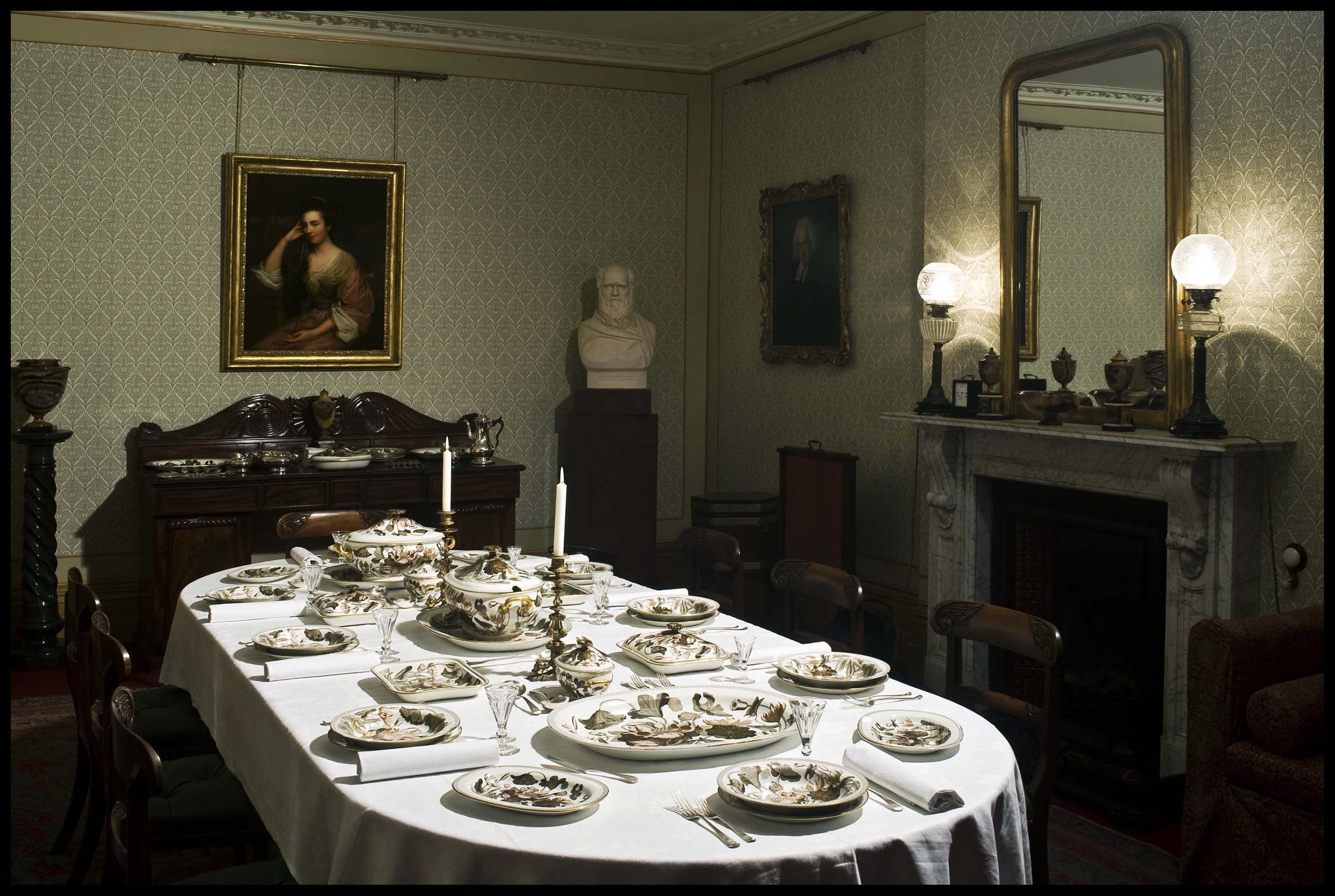 This George III drum library table contains four drawers alternating with four small cupboards. The top is covered with blue baize and rests upon a tapering stem with tripod legs. The table was used by Charles Darwin to examine insect specimens, which he kept in pillboxes. The fitted castors would have allowed him to move the table in the confined space of the study at Down House. 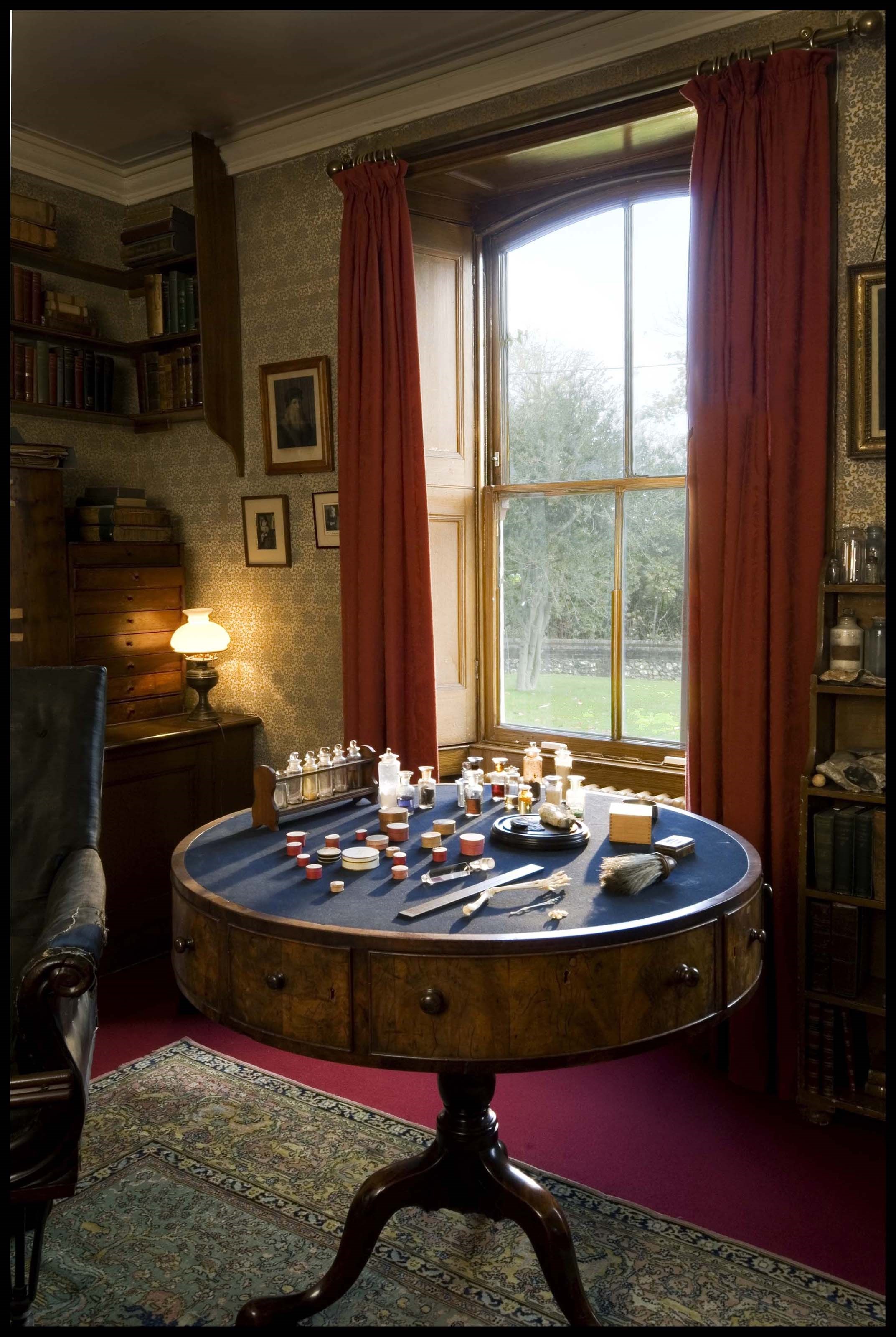 Charles Darwin - On the Origin of Species (First Edition)

On the Origin of Species (First Edition)

The publication in November 1859 of Charles Darwin's seminal work profoundly rocked Victorian society and forever changed humanity's view of the natural world. Only 1,250 first editions were printed by the publisher, John Murray. This copy was a gift from Darwin to his friend and confidant Charles Lyell, and contains the inscription 'From the author to Lyell'. 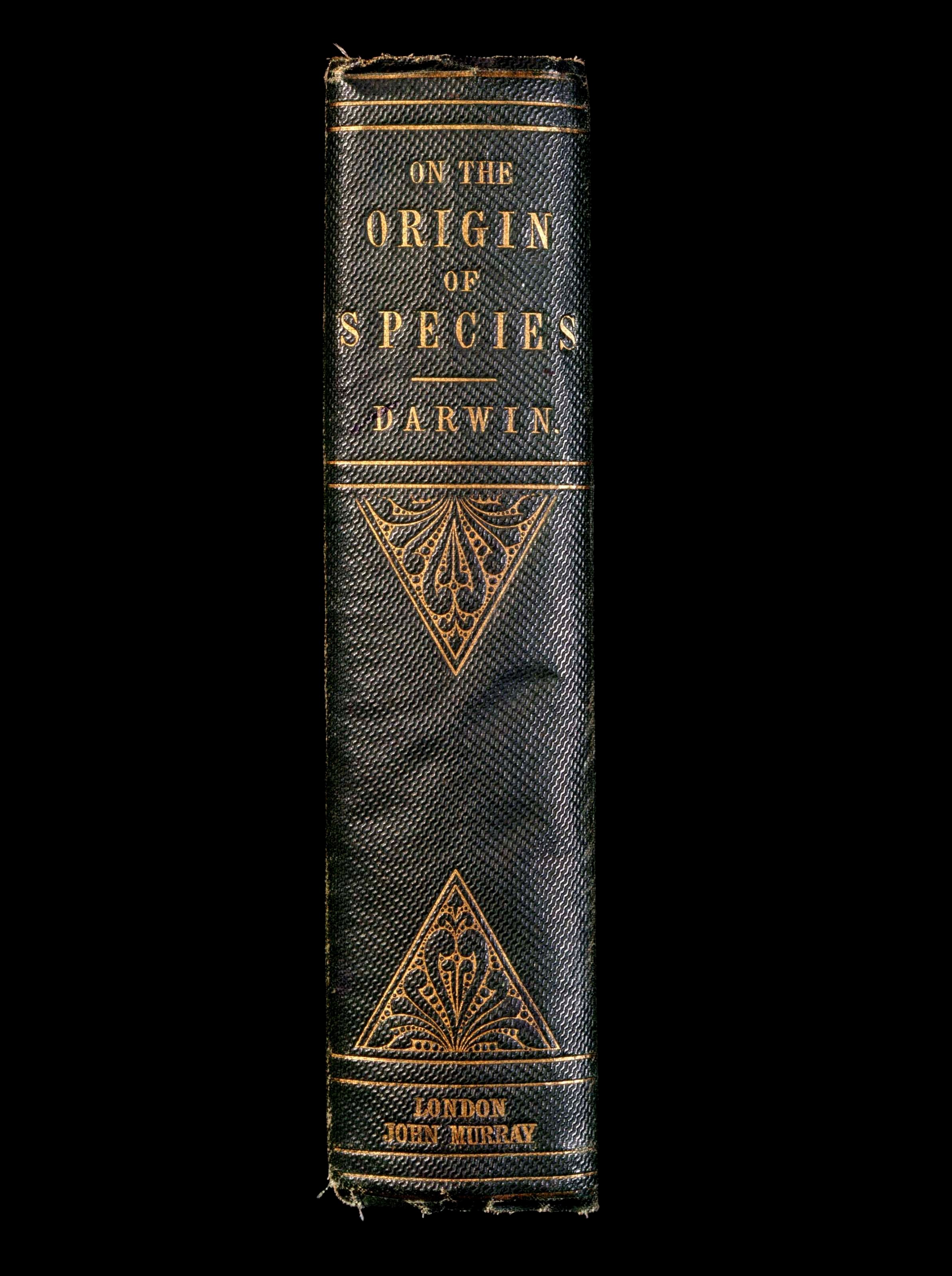 Emma Darwin was a keen and accomplished pianist, often playing in the drawing room at Down House. It is thought that she received lessons from Chopin. Broadwood's pianos were considered some of the finest of the time and had been preferred by both Mozart and Beethoven. Emma's piano is made from rosewood, which had been a particularly popular material in England since the 17th century because of its highly decorative appearance. 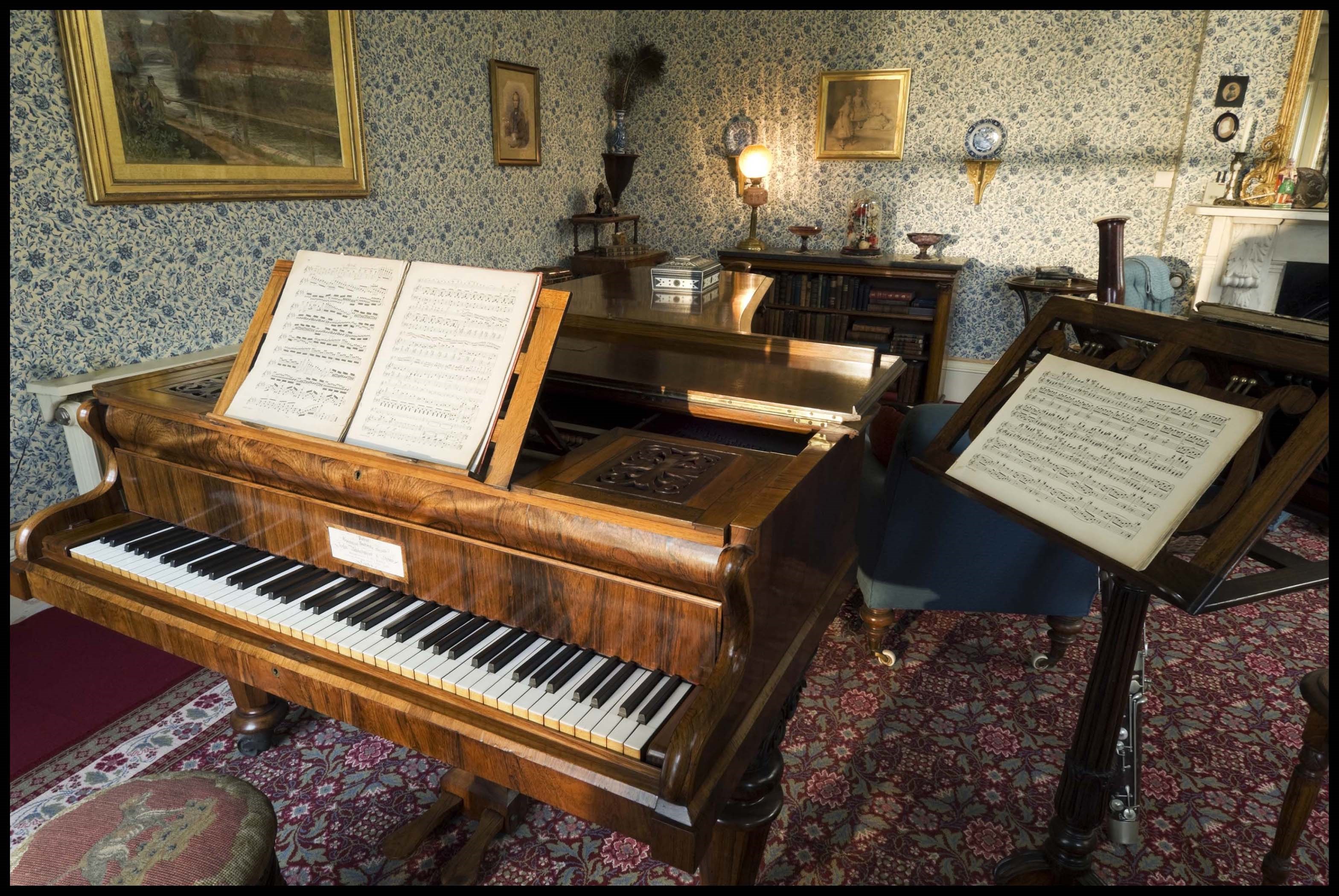 Charles Darwin - Journal of the Voyage of The Beagle

Journal of the Voyage of The Beagle

Throughout his voyage on the Beagle, Charles Darwin made his observations in small notebooks. After each day he would rewrite these notes, forming a comprehensive journal. The completed journal contains over 750 pages bound in alum-tawed - that is, aluminium salt-treated - leather. It represents Darwin's thoughts and interpretations over five of the most important years of his life - thoughts which would influence his most famous work, On the Origin of Species. 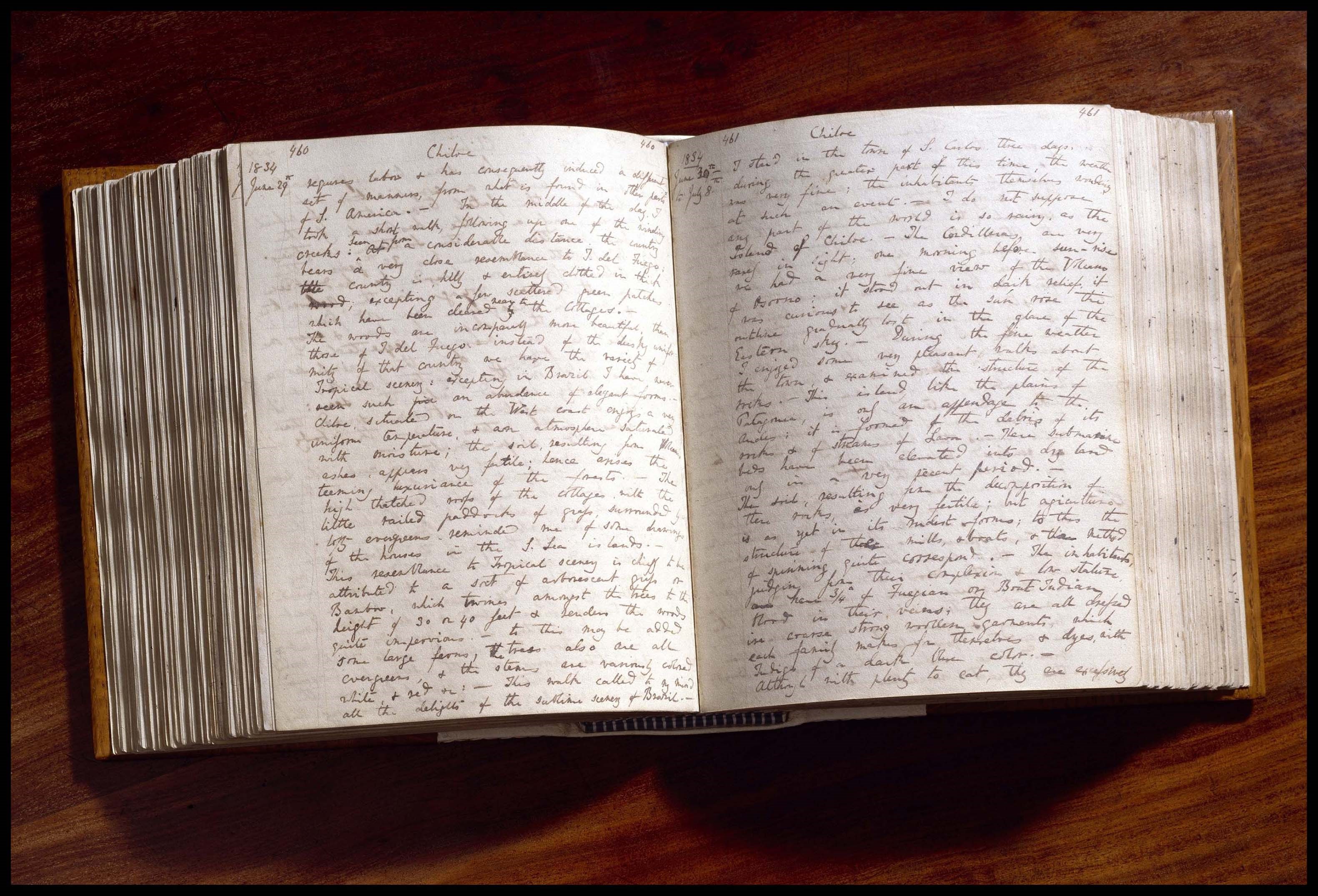 Still Life with Insects on Foxgloves

Charles Darwin inherited this painting from his father, Dr Robert Darwin, to whom it was presented as a gift by a patient. It hangs in its original place at Down House. The wildlife subject of the piece is likely to have appealed to Charles. The painter, Trajan Hughes, was a rather obscure Welsh artist. It is believed that only three signed examples of his work have been recorded. 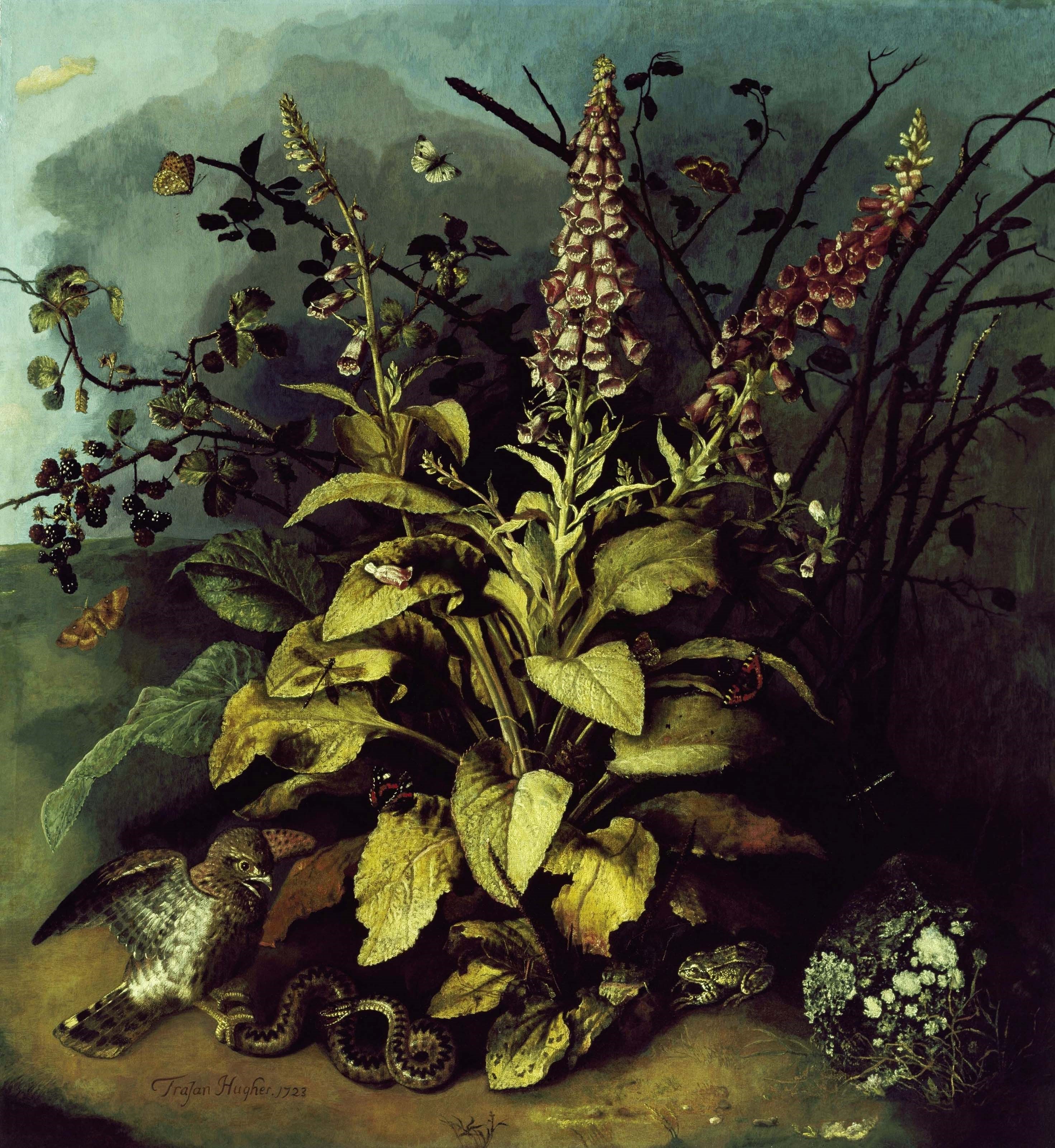 Charles Darwin commissioned the Downe village carpenter to make this stair slide soon after the family moved to Down House. By this time Emma Darwin had given birth to two children and was again pregnant. The slide was designed to fit the lower section of the staircase, and would have been enjoyed by all ten of the Darwins' children. There are even records of Emma and the children's governess trying it. 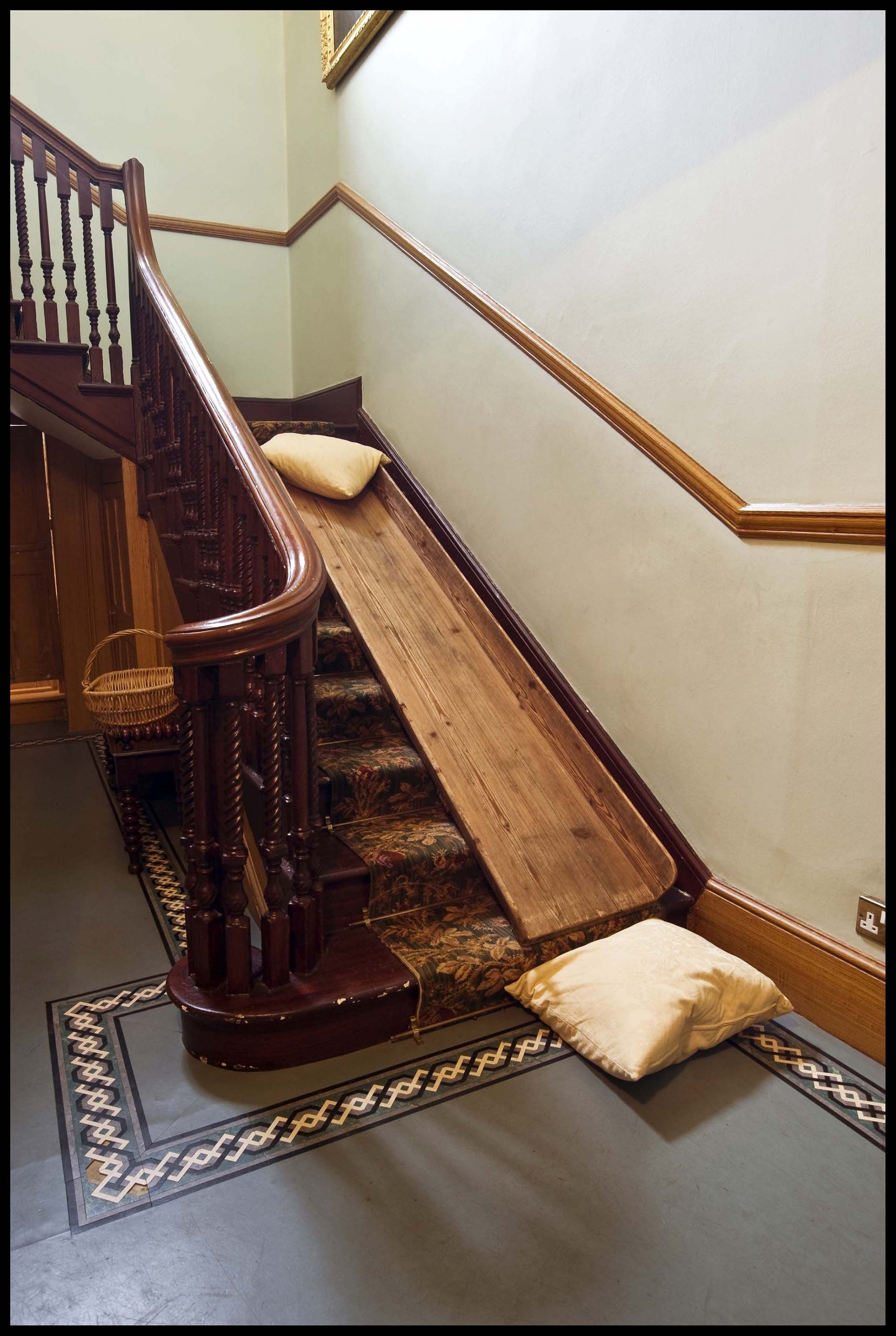 This pocket compass and clinometer was specially made for Charles Darwin for his Beagle voyage. The clinometer was used to measure the gradients of rock formations, making this a vital piece of geological equipment. William Cary's workshop in London was well known for the quality of the scientific instruments it produced. This piece is enclosed in a fine mahogany box. 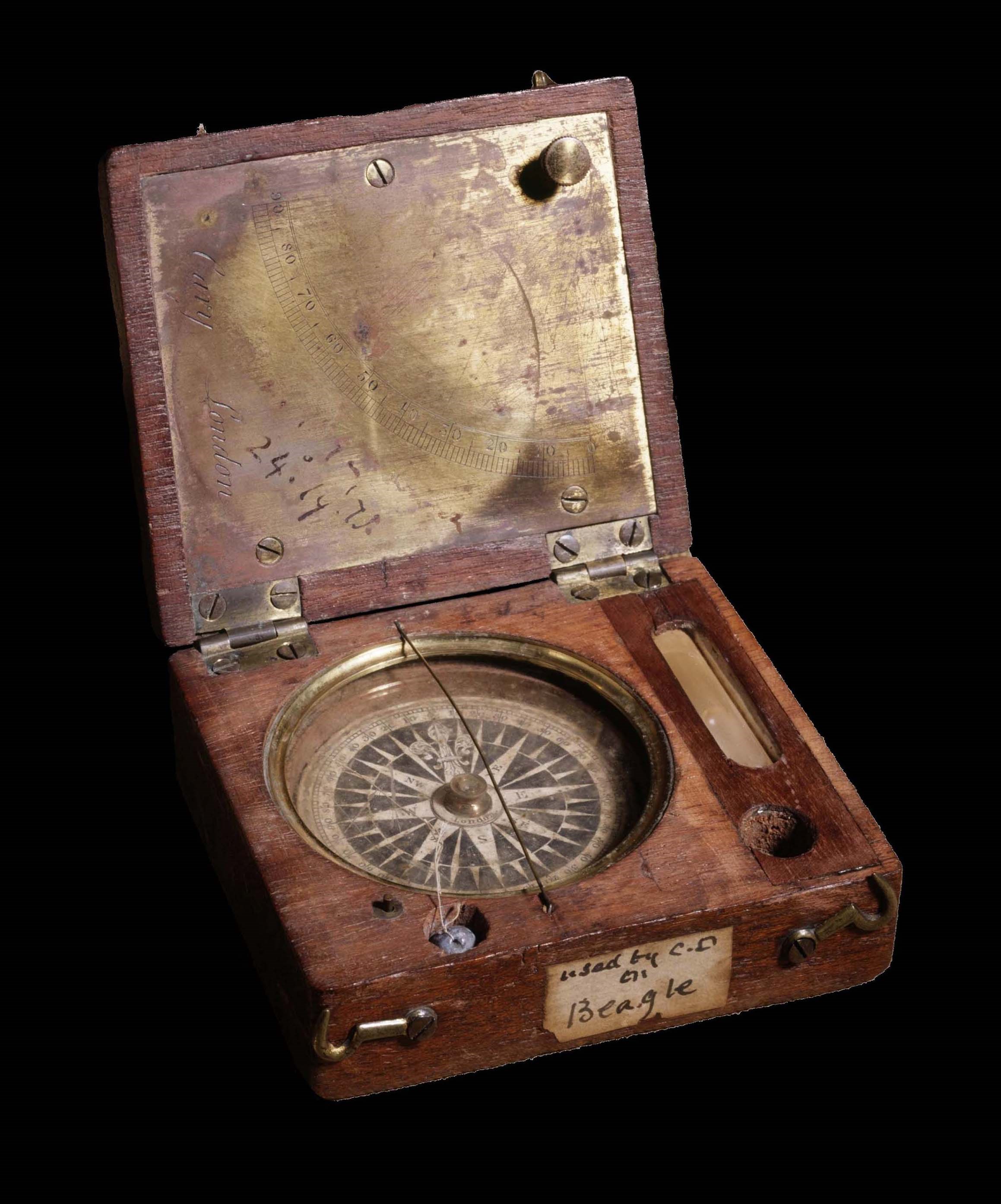