The material cared for by English Heritage and owned by the National Trust is just part of what has been excavated at Housesteads Roman Fort over the last 150 years or so. Some of the rest belongs to the Clayton Collection and some is on display at the Great North Museum.

English Heritage cares for material found both within and outside the fort, helping visitors to explore life in the military and civilian spheres.

Despite military occupation at Housesteads lasting almost 300 years, the material culture which remains is fragmentary. For example, only one helmet handle has been discovered. Does this mean that there was only one helmet at the fort? Or were handles well secured and Roman soldiers extremely careful?

Such questions are typical of those posed by the Housesteads collection. It is a fragmentary fraction of the material culture of many generations of soldiers, families and civilians. But the remains still offer a powerful insight into the lives of these people, their cultural and social mindset, and the administration and routines of the Roman army.

Intaglios are small insets designed to be held in a finger ring and usually made from semi-precious gemstones. Their themes were often deities or things seen in everyday life. This red jasper intaglio shows a huntsman carrying a hunting stick (a ‘lagobolon’) over his shoulder, from which hang a hare and a basket. It was possibly made in a local workshop but it is likely that most gemstones like this were imported. 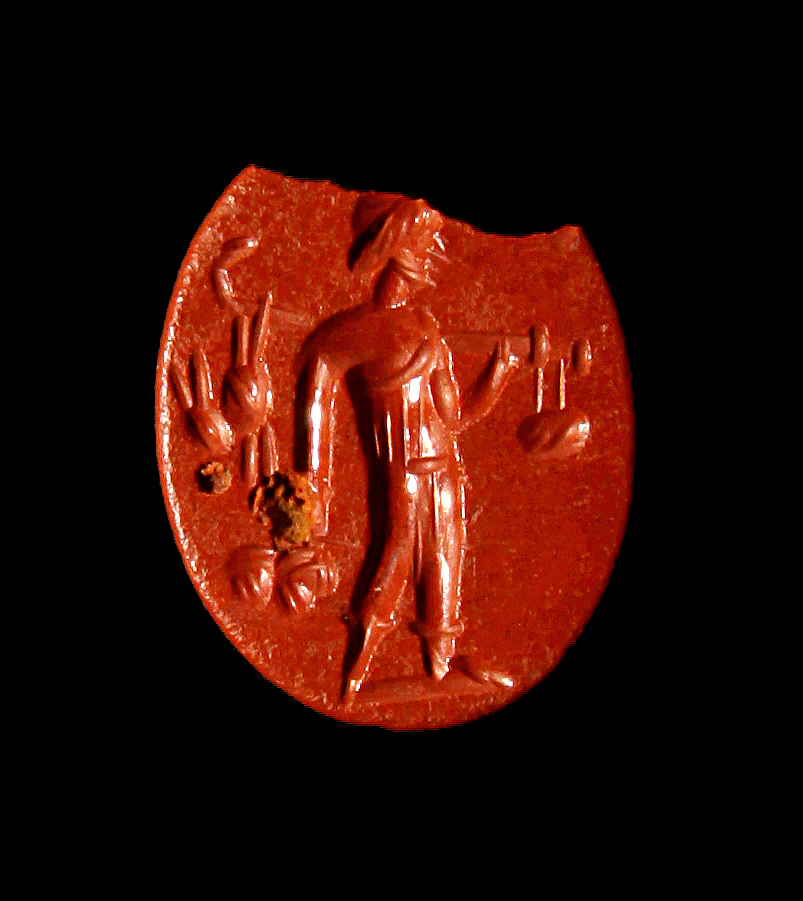 The survival of organic materials is rare along Hadrian's Wall because it requires specific environmental conditions. This shoe was a very personal possession. It has a detailed openwork upper which would have been laced up. The sole shows that the hobnails – many of which still survive – were spread across the sole to give better grip. 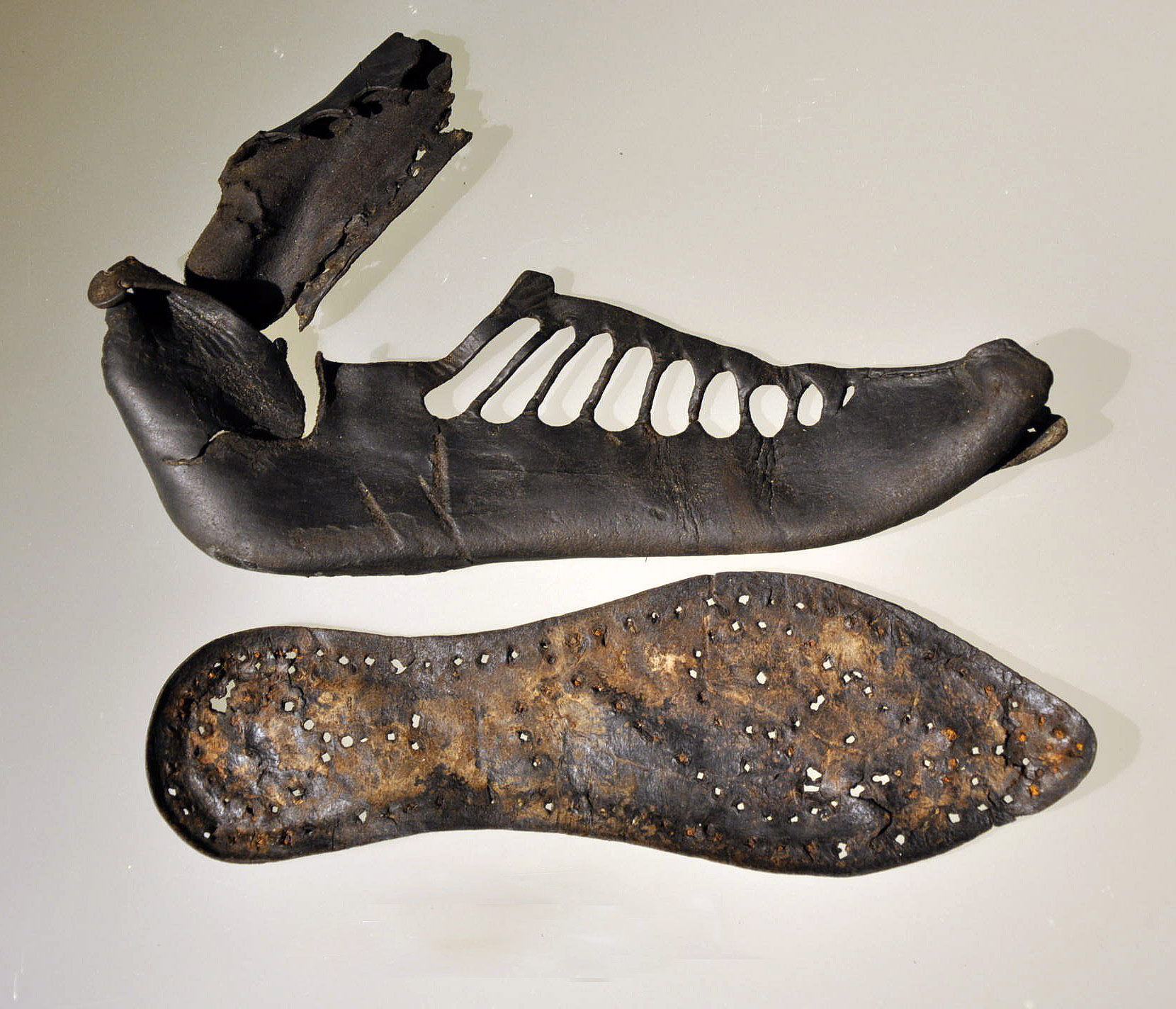 This rare and unusual flask has three inset bands of enamel, some of which survives, although it has decayed to a green colour. Unfortunately the lid was lost in antiquity.

The excavators described the flask as containing a beeswax-like material that was ‘scented’ when found. Jars like this would have contained something for medicinal or cosmetic use. As this one was found in a centurion’s quarters, perhaps it belonged to his wife. 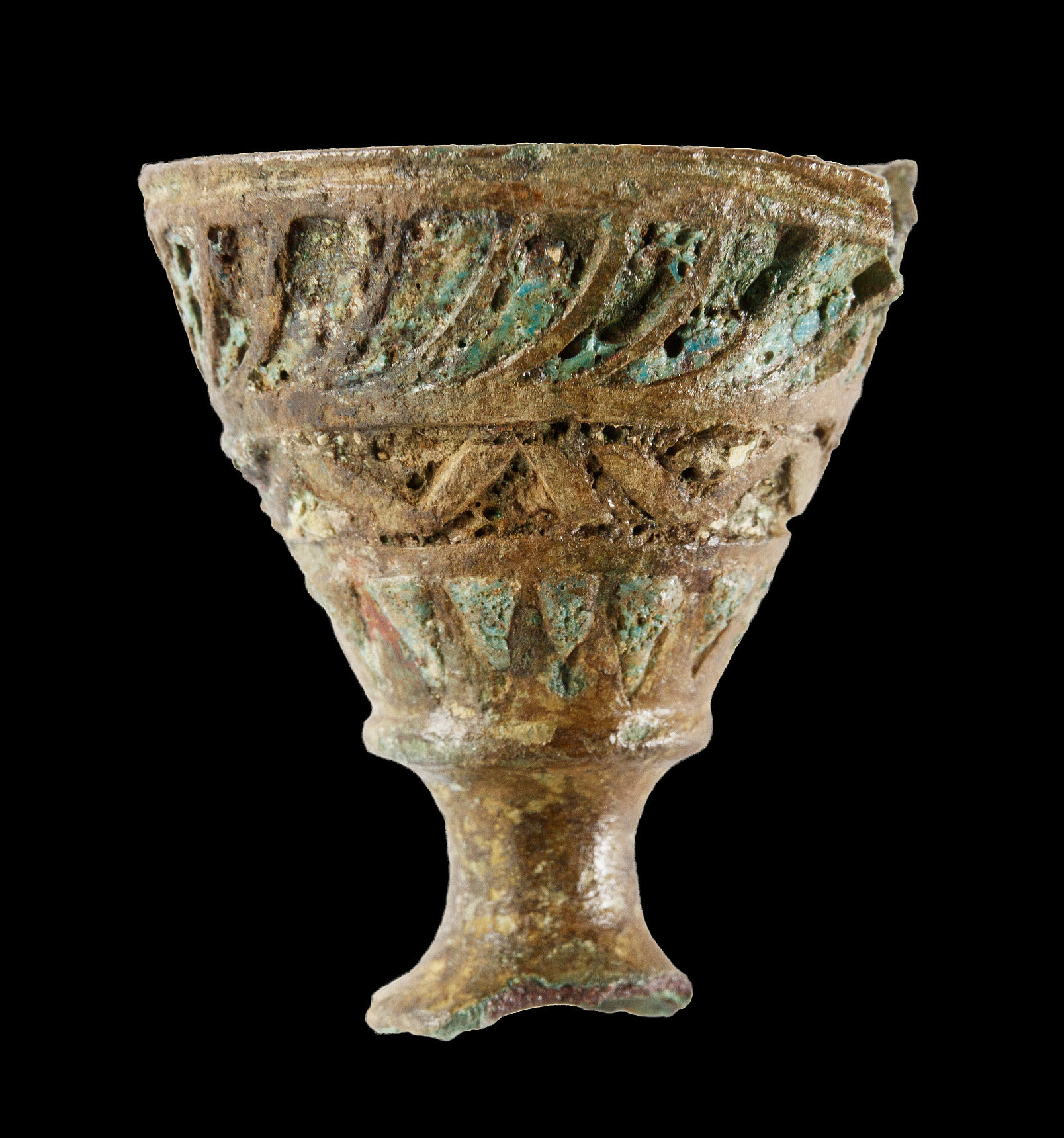 This altar dedicated to Mars, the god of war, has a knife carved on the left-hand side and a patera and jug on the right. It was dedicated by a soldier from Frisia, in modern-day Holland, from the tribe of Twenthe.

The altar is now on display at Chesters Museum. 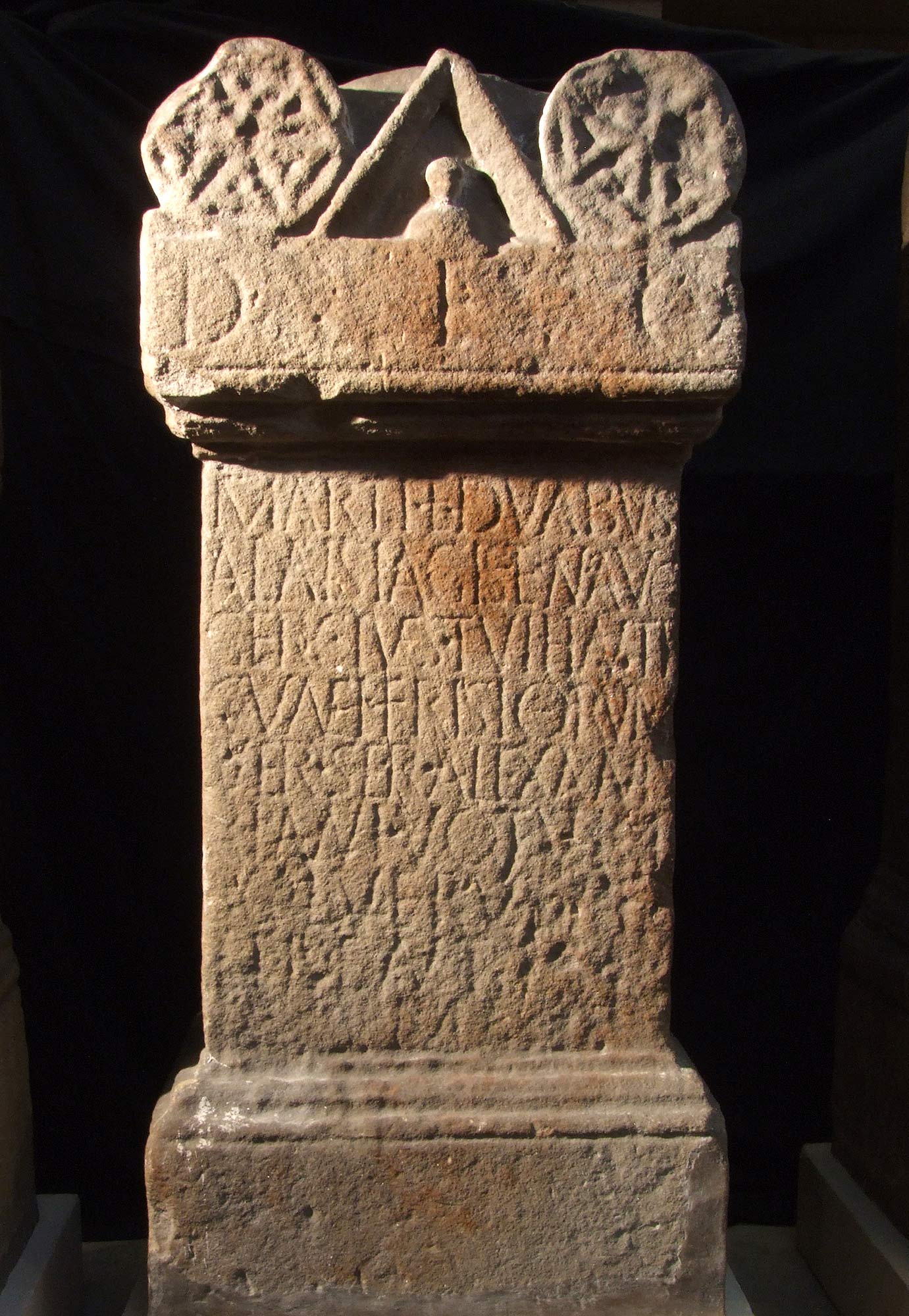 This arch probably formed part of the niche containing the cult statue or altar of the German war god Mars Thincsus in a temple built by the Frisians. In the centre is a figure of Mars, helmeted, holding a spear in his right hand and a shield in his left. He wears a cuirass (armour covering the torso) and a sword hangs by his right side. A large goose stands to his right, looking up at him.

The figures in the side panels are naked and cross-legged; both hold a raised torch in one hand and a large wreath in the other. It is possible that they are wingless cupids. In this context they could symbolise victory in battle under the protection of Mars Thincsus.

The altar is now on display at Chesters Museum. 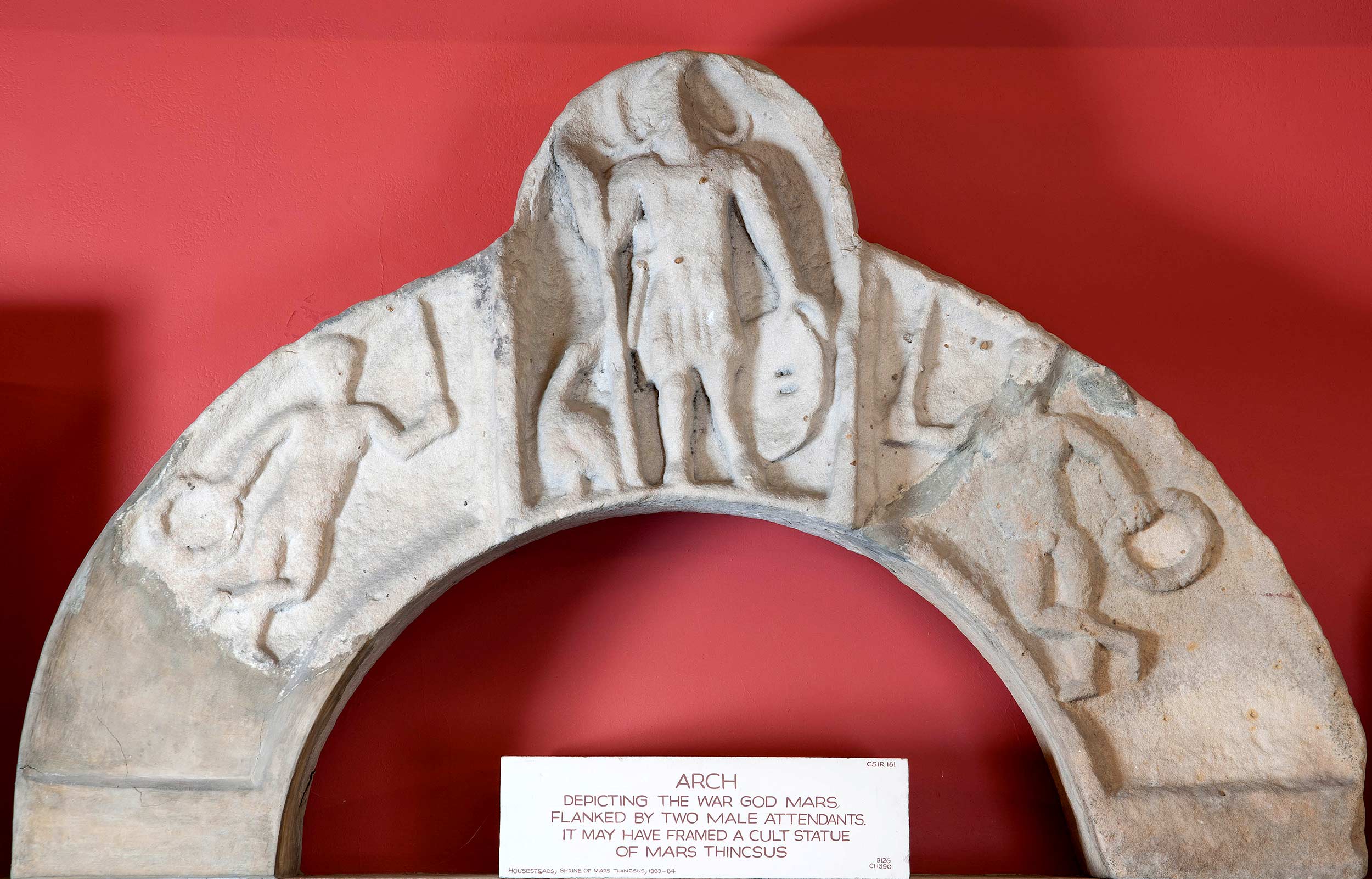 These genii cuculatti (hooded spirits) are wearing the cucullus, a hood attached to the cloak. Their cloaks may be the birrus Britannicus, the woollen cloak that Britain was famous for exporting across the Empire. A genius is a spirit, and there could be genii of certain places, or activities. These Celtic deities were associated with fertility and prosperity. 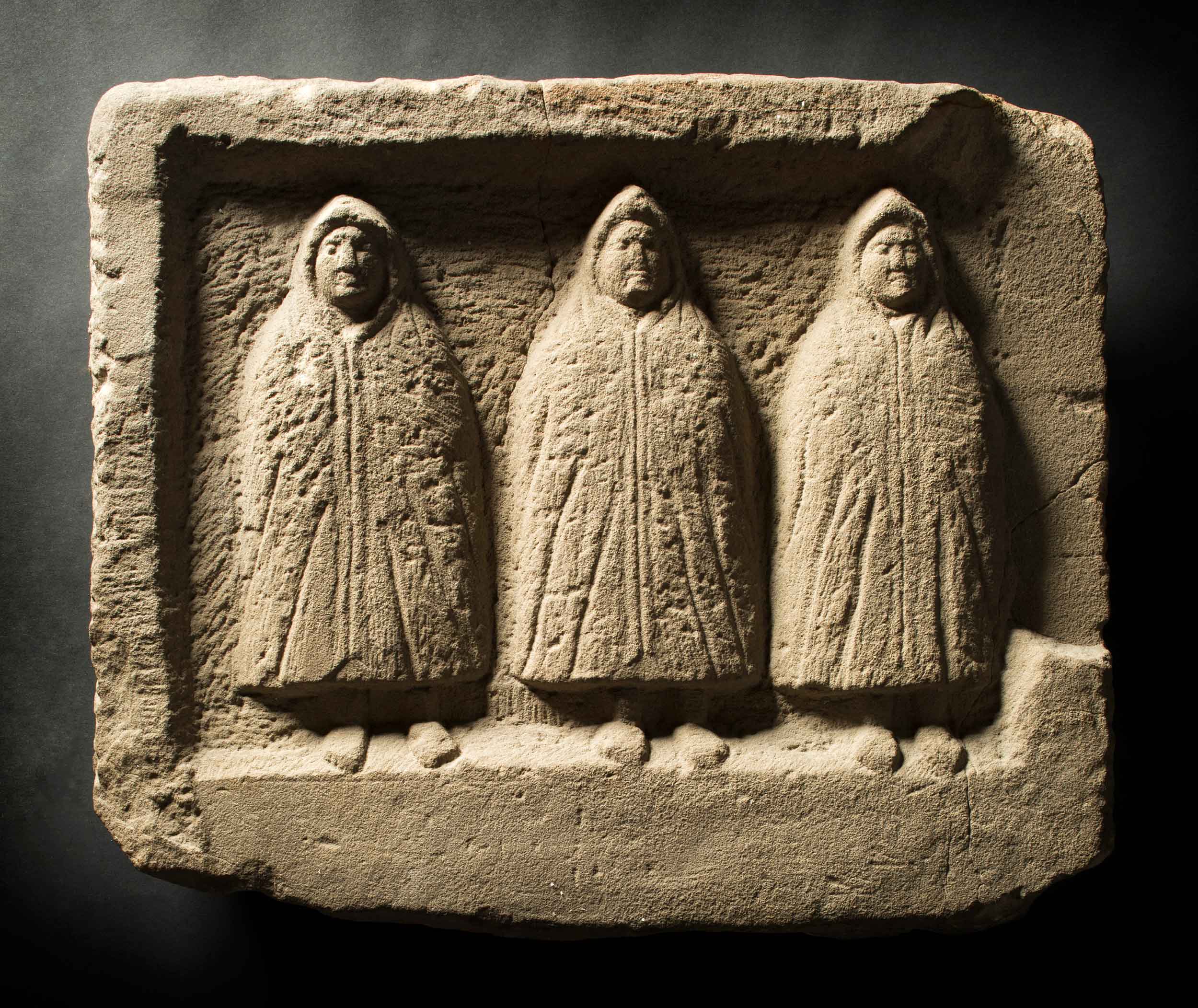 This unassuming pot is made of a type of pottery known as Housesteads ware, even though it has also been found at Birdoswald and Vindolanda. It is thought that this type of pottery was made by the families of soldiers from Frisia (an area of the Netherlands) based at the fort, who wanted to keep their native pottery tradition alive. 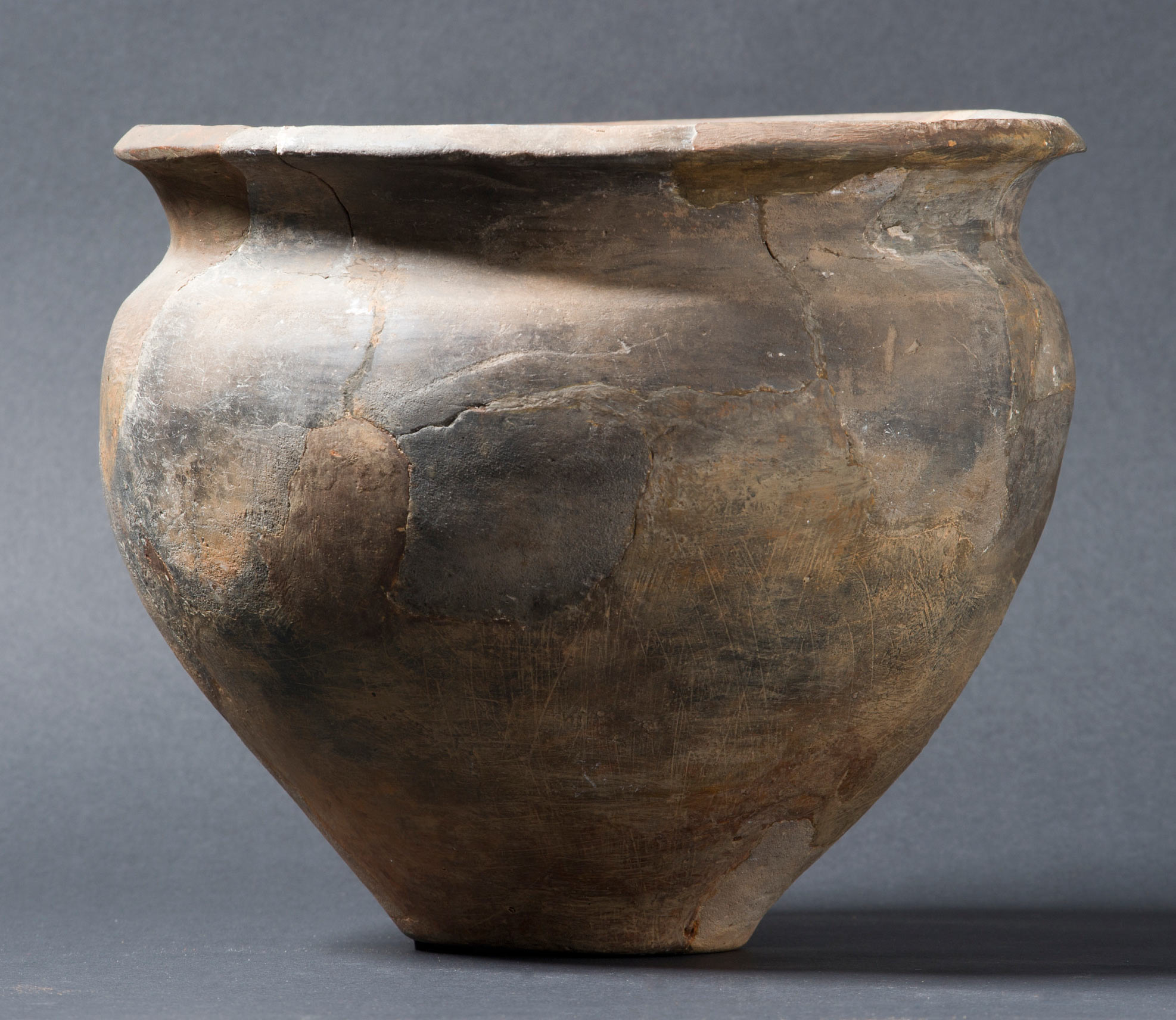 This coarseware dish has been marked with the Celtic name Belicianus. Belicianus was probably a soldier who needed to identify his dish in a fort of some 800 men, most of whom had similar items. Graffiti on pottery vessels occurs regularly at forts, usually on items such as bowls and beakers, showing that these possessions were personal and valued. 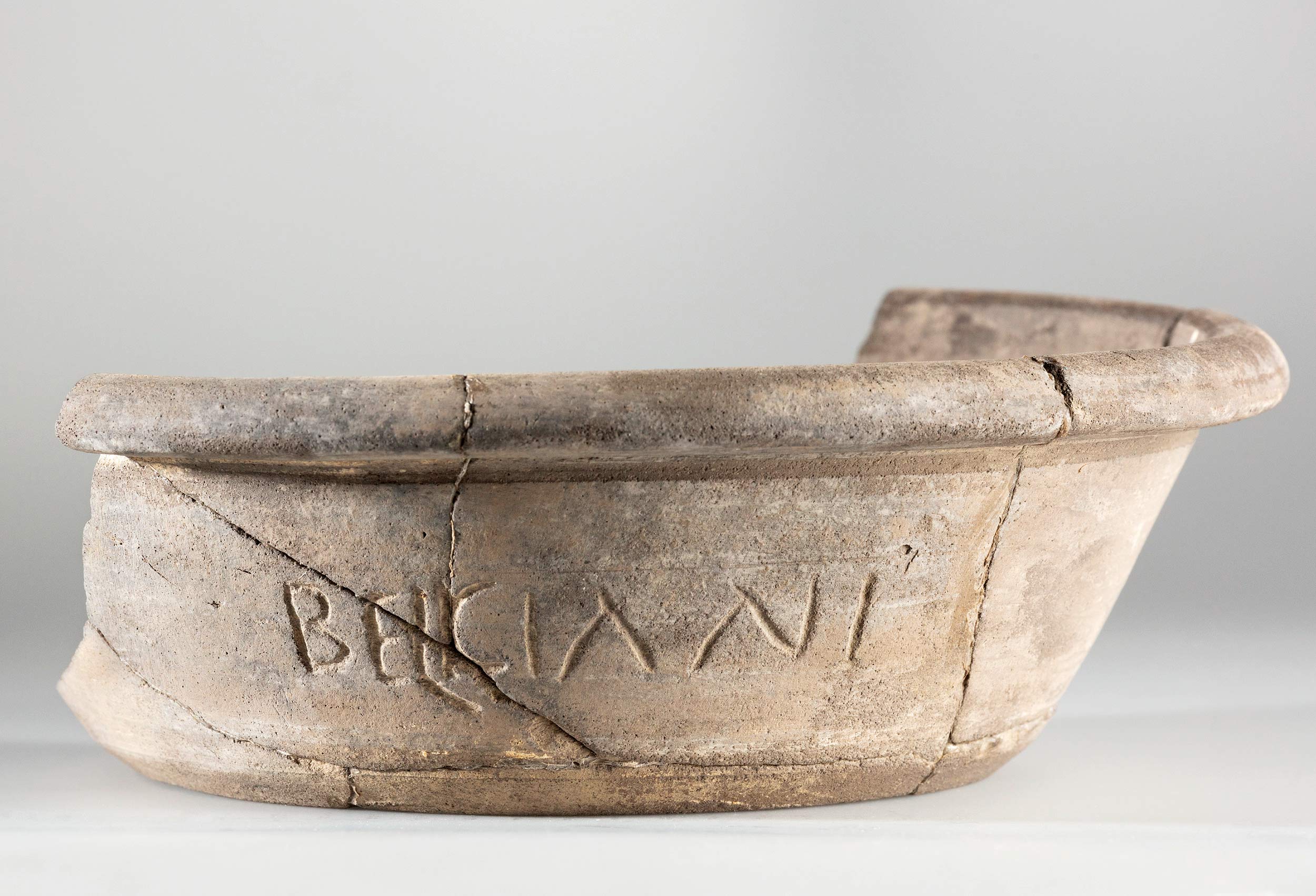 This coin mould and counterfeit coin provide evidence of illegal activity in the civilian settlement at Housesteads. Coinage was controlled by the emperor and there were harsh punishments for anyone caught counterfeiting.

The mould was used to make counterfeit coins of Julia Domna, the wife of Emperor Septimius Severus. The side shown here is the reverse, with the goddess Victory holding a wreath and palm.

The coin shown here was not made in this mould, but is a copy of a coin of Severus Alexander (AD 222–35) and shows Jupiter holding a thunderbolt and sceptre. 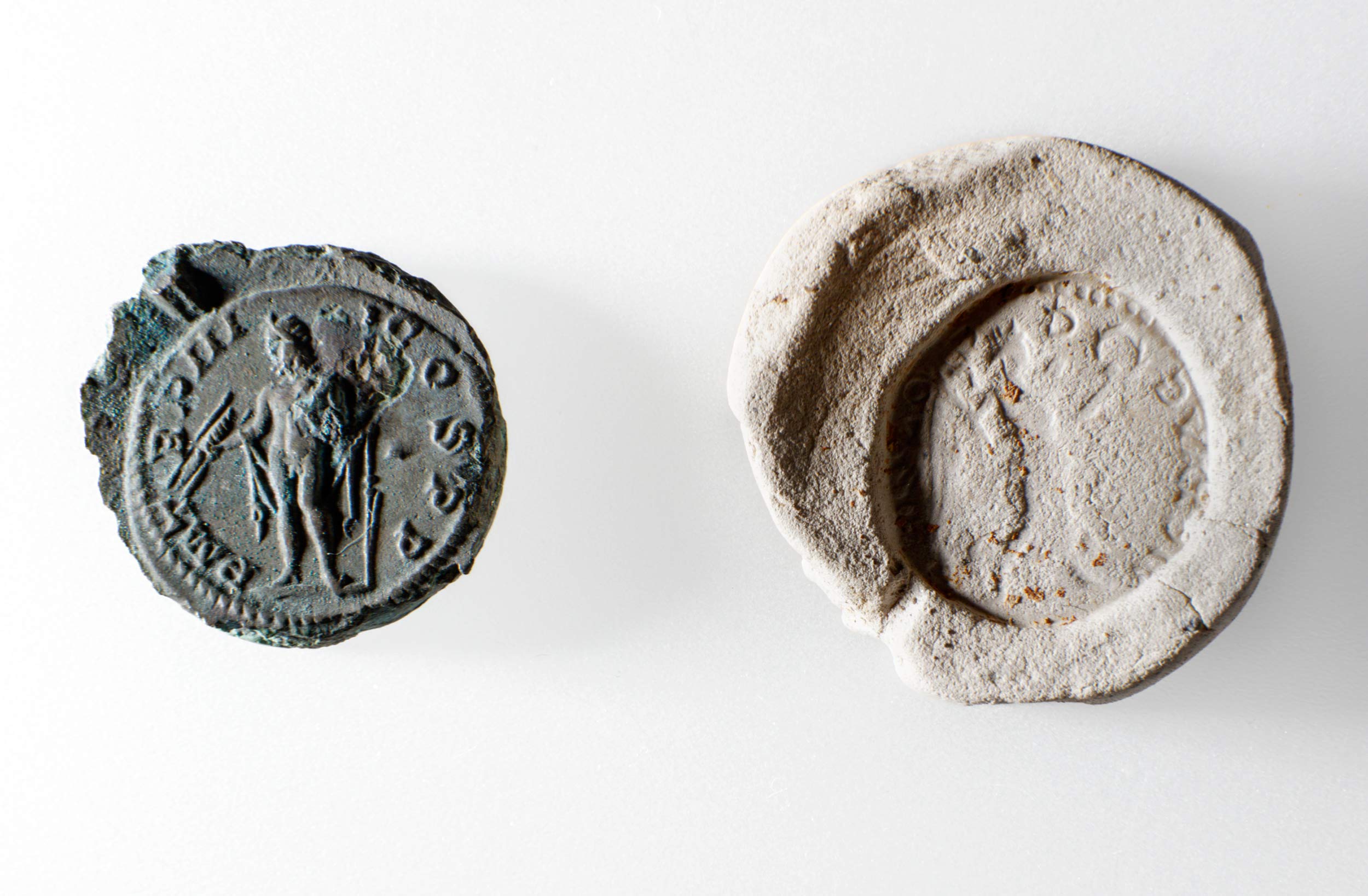 Amber is a fossilised tree resin which was imported from the Baltic. It was one of several materials thought to have protective properties, and its ability to create mild static electricity probably meant that it was often carried as a talisman. This amber bead (left) would have been worn in the hope that it would bring health and safety to the wearer.

The bead on the right is made from lithomarge, which was also thought to have magical properties. Lithomarge is a form of kaolin (clay) which was widely used for the manufacture of amulets in the Iron Age and Roman periods. 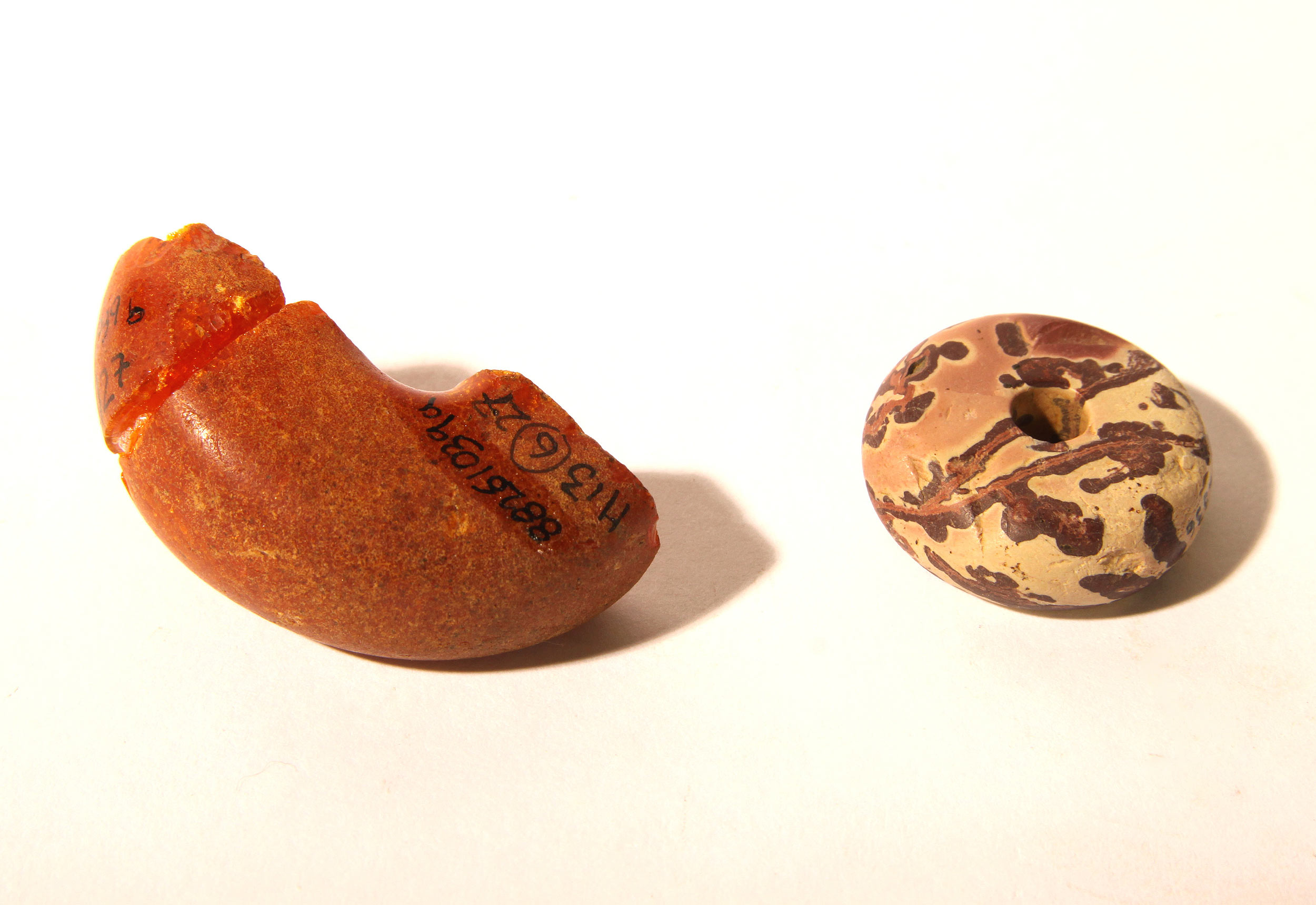 Figurines like this were made in Gaul (modern-day France) from a malleable kaolin-based clay that contained little iron, which gives it the white colour. They depicted a range of deities, but Venus, the goddess of love, was the most popular. Such figurines were probably used in daily observances within household shrines – religious worship did not take place only in public temples. 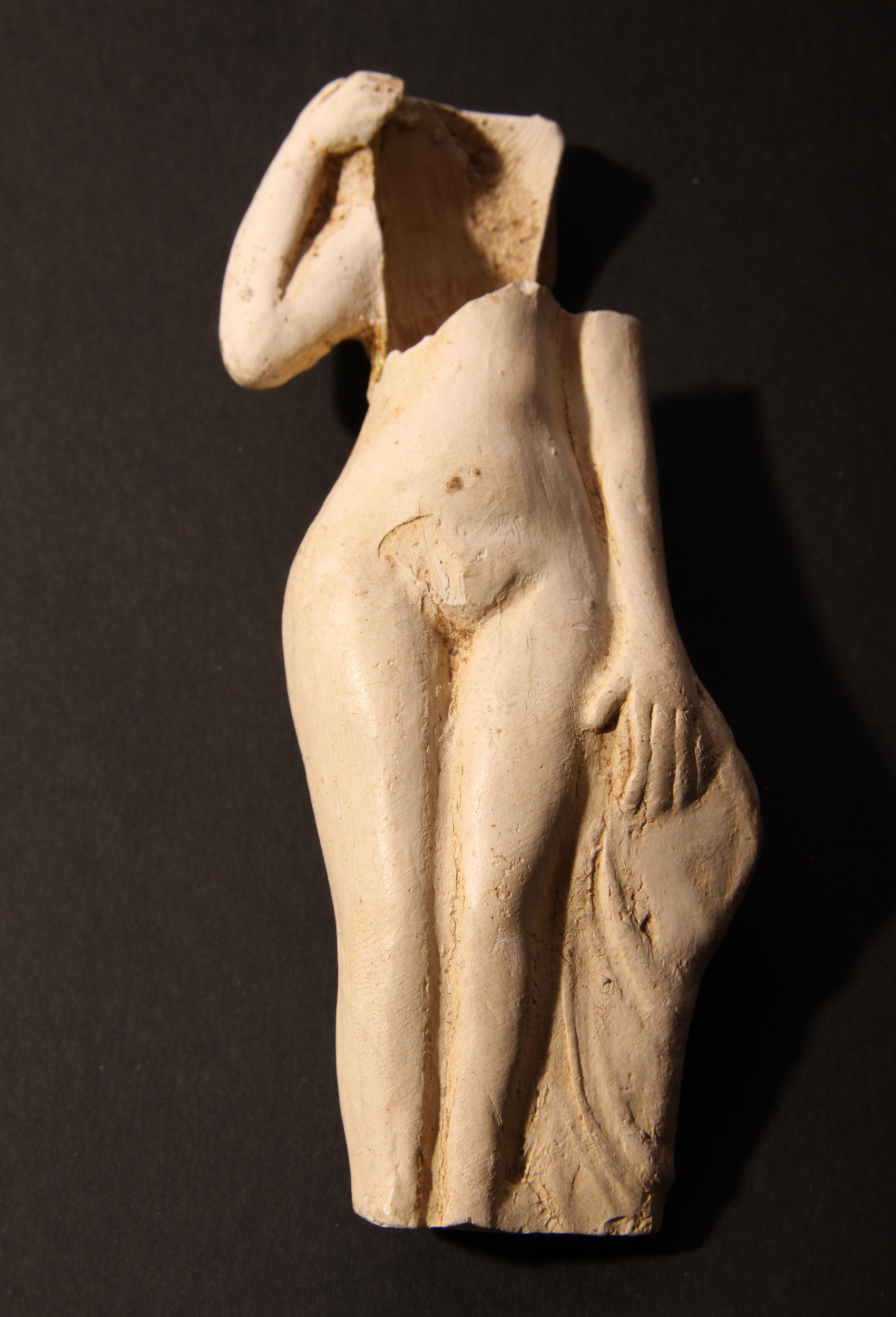 This copper-alloy handle from a knife or razor is in the form of a lower leg and foot. The sock is decorated with a herringbone pattern, perhaps indicating wool, and the sandal is shown as a ribbed moulding down the centre of the foot and at the ankle. The blade of the knife or razor has not survived but would have been made from iron. 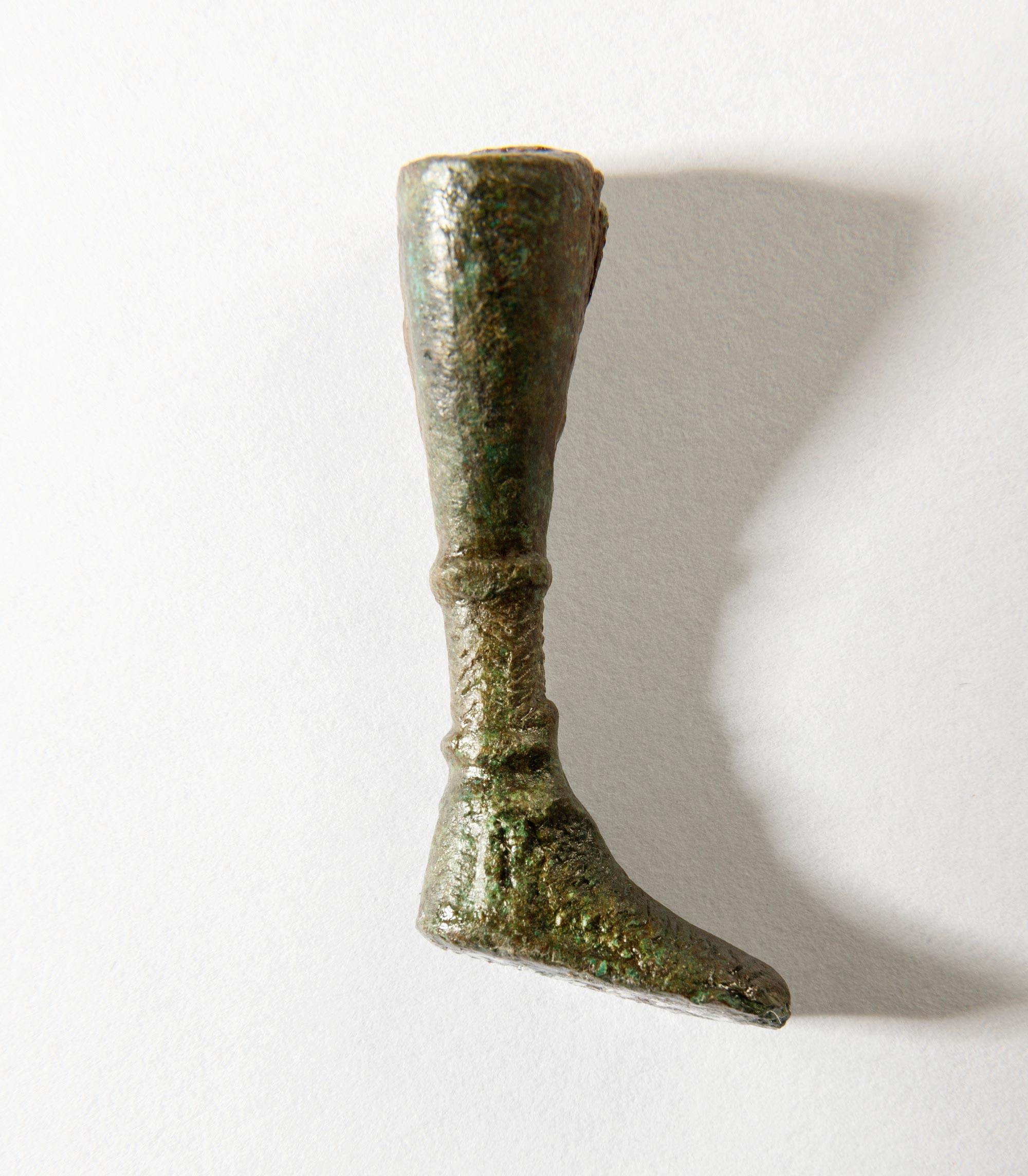