The Annunciation at Rievaulx Abbey

Visitors to Rievaulx Abbey may notice a stone panel discreetly placed high on a wall. Some of the detail of the carving has been lost to time and weather, but closer inspection shows two figures.

The scene depicts the moment of the Annunciation, when Mary was told that she would carry the Son of God. This square of stone tells us much about the importance of this biblical moment to the past inhabitants of Rievaulx – and indeed of the beliefs of the wider medieval world. 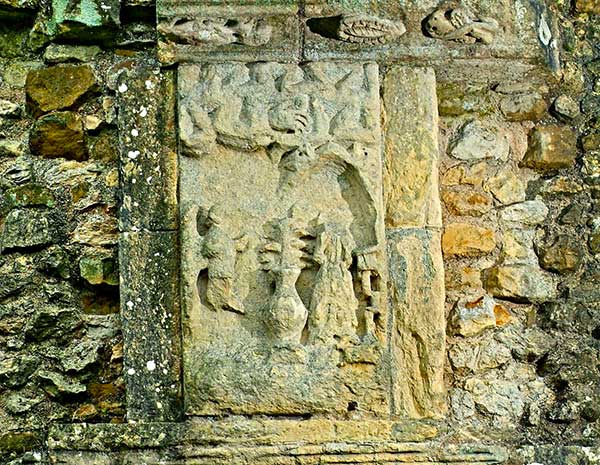 Weather-worn as they are, the shapes on the sandstone panel at Rievaulx can be identified as two figures with an imposing jar of lilies between them

Above the entrance to the late medieval abbot’s house at Rievaulx Abbey is a sculpted sandstone panel dating to around 1500. The panel provides insights into the beliefs of the monks who lived at Rievaulx between its foundation in 1132 and its closure in 1538.

The panel is the only piece of medieval imagery featuring figures which remains in its original location at the abbey. Inspection of the worn stone shows that it depicts the Annunciation to the Virgin: the moment in the Christian story when the Angel Gabriel appeared to Mary and told her that she would conceive Christ.

The stone panel at Fountains Abbey, not far from Rievaulx, which may even be by the same sculptor. This panel is less weathered than the Rievaulx Abbey example and the outlines of key features of the Annunciation in art are still visible

Time has not been kind to this sculpture. It has endured the aggression of religious zealots and centuries of exposure to the North Yorkshire weather. Despite this, its main features are still legible. On the left is the Angel Gabriel. A tall vase containing lilies is central. Under an arch on the right is the Virgin Mary, who stands next to a lectern with an open book. A hand, representing God the Father, emerges from undulating clouds above.

Another medieval stone sculpture depicting the Annunciation survives nearby. This panel is at Fountains Abbey, which, like Rievaulx, belonged to the Cistercian monastic order of the Middle Ages. Some details differ from the sculpture at Rievaulx, but they are broadly similar; it’s even suggested that they may be by the same sculptor. Such a relationship is plausible, as we know that there were close connections between these monasteries.

The Annunciation in medieval art

The Annunciation is one of the most significant events in the Christian story. Described in the Bible in the gospel of Luke, it tells how God the Father sent the Angel Gabriel to Mary in Nazareth. The angel greeted her with the words: ‘Hail Mary, full of Grace, the Lord is with thee’. He told her that she would conceive a child who would be called Jesus.

Mary, startled by the appearance of the angel and puzzled by his greeting, asked how she could conceive as she was still a virgin. The angel replied that the Holy Spirit would come to her from God the Father. The Virgin humbly consented to the will of God, making possible Christ’s incarnation and the salvation of humanity.

The importance of this biblical description to the image at Rievaulx – which features the angel, Virgin and God (represented by the hand) – is obvious. The sculpture also has a clear parallel in a miniature of the Annunciation from a 15th-century Book of Hours painted in York.

But the sculpture has other details that need explanation.

A detail from an English-made alabaster panel. A dove can be seen flying from the mouth of God the Father (upper left corner)
© Victoria and Albert Museum, London

The Rievaulx sculptor’s use of a hand to represent God the Father is rare for a sculpture dating from about 1500. By then, it was much more usual for God to be represented by a bust or a small head, usually in the top left hand corner. This motif was used in the Fountains Abbey sculpture, in which He appears to have spiked hair! These 'spikes' probably represent the heavens; contemporary Annunciation depictions show the head of God framed by clouds with sharp, shard-like edges.

A detail of a stained glass window at Ely Cathedral, 1340. Mary looks up at a dove representing the Holy Spirit. The panel at Rievaulx Abbey would have also originally featured a dove
© Holmes Garden Photos / Alamy Stock Photo

The Rievaulx panel would originally have depicted the Holy Spirit, represented by a dove, descending from the hand of God towards the Virgin. The angel in the Fountains Abbey sculpture carries a scroll inscribed in Latin. It bears the Angel Gabriel's words of greeting to the Virgin:

Hail Mary, full of grace, the Lord is with thee.

At the end of the scroll is the dove.

An illumination of the Annunciation from a Flemish psalter, c.1275. The arches above Mary and the angel indicate that they are within Mary's chamber
© Granger Historical Picture Archive / Alamy Stock Photo

The gospel account of the Annunciation describes the angel as ‘being come in’ to the Virgin. For this reason, the scene is usually depicted within an interior. The Rievaulx sculpture has an arch above the Virgin to show this. The Fountains Abbey panel also depicts Mary beneath an arch; hovering angels pull back textile drapes to reveal the interior.

Lilies are clearly visible in these two panels from a 16th-century triptych held at Apsley House, another English Heritage property

Some details in the sculpture have their source in later theological and devotional literature. From the mid-13th century, French depictions of the Annunciation typically included a vase containing lilies; by the end of the Middle Ages this tradition had spread to England.

Lilies were a common emblem of the Virgin in art and medieval theologians interpreted them as a reference to Mary’s purity. The Cistercian saint Bernard of Clairvaux, an important theologian and administrator, linked episodes of Christ’s life to the lily. This was seen as the flower of heaven and a symbol of life and light. St Bernard also wrote several sermons on the Annunciation in which he expounded on this meaning.

The late medieval ‘bestseller’ the Golden Legend (Legenda aurea), a collection of saints’ lives, quoted St Bernard’s discourse on the significance of the lilies:

Nazareth means 'flower'; hence Bernard says that the Flower willed to be born of a flower, in 'Flower', in the season of flowers.

The vase in the Annunciation sculpture from Fountains has a curious hole in its middle. Netherlandish paintings of the Annunciation dating to the 15th and early 16th centuries sometimes depict lilies standing in a glass vase with a ray of light shining through. This reflects that Mary remained a virgin despite conceiving Christ, and the hole in the vase on the Fountains panel probably had the same meaning.

A lectern and book are central in this detail reproduced from a miniature in The Great Hours of Anne of Brittany (Chromolithograph printed by Franz Kellerhoven, 1814–72)
© Lebrecht Music & Arts / Alamy Stock Photo

The lectern and book

From the 11th century onward, it became usual for depictions of the Annunciation to show the Virgin with an open book. This was to represent the Psalter, the biblical Book of Psalms, read by pious individuals during their private devotions.

But by the mid-13th century, a new tradition had emerged: that the angel disturbed the Virgin while she was reading a text in the Old Testament. This text – ‘behold a virgin shall conceive and bear a son’ (Isaiah 7:14) – prophesied the virgin birth.

The detail of this English 15th-century silver-gilt ring shows the kneeling angel beside Mary. The band of the ring bears the Latin words of the angel's salutation to Mary: 'Ave Maria, gracia plena'('Hail Mary, full of grace')
© Private collection

The Annunciation panel from Fountains depicts the angel kneeling, and it’s likely that the angel in the sculpture from Rievaulx was also in this position.

This detail first emerged in 13th-century Italy, and moved into England via French sources. The adoption of this iconographic detail may have been influenced by the Meditationes vitæ Christi, which was a popular devotional text written in about 1300 by a Franciscan friar known to modern scholars as the Pseudo-Bonaventure.

An English translation of this text was made by Nicholas Love, a Carthusian monk of Mount Grace Priory, North Yorkshire, in the early 15th century. Love’s translation describes the Annunciation in the following terms: ‘Gabriel then entred in to maryes chamber…knelinge with deuocion’.

The importance of the Annunciation at Rievaulx

Rievaulx, like all Cistercian monasteries, was dedicated to the Blessed Virgin Mary. Her gilded image is described in sources as standing on the high altar in the church. Each year, the monks celebrated six feasts in the Virgin’s honour, including the feast of the Annunciation on 25 March. This falls exactly nine months before the birth of Christ on Christmas Day.

St Aelred, abbot of Rievaulx between 1147 and 1167, wrote several sermons on the Annunciation. These would have been read to the monks in the chapter house (a meeting room in a monastery) on 25 March. Walter Daniel, a contemporary and biographer of Aelred, was the author of a commentary on the biblical text describing the Annunciation. We know it was in the library at Rievaulx in the 1530s, but no copies survive. 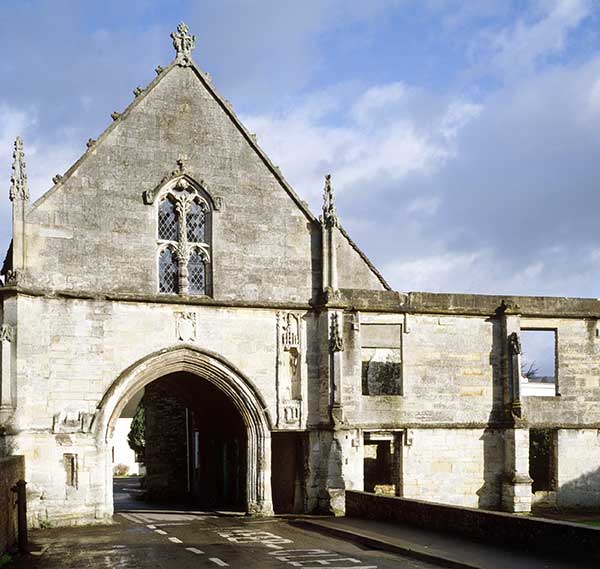 Kingswood Abbey Gatehouse, also cared for by English Heritage, features a pedestrian doorway (centrally above) above which is a recess where faint traces of a former Annunciation scene can be made out

Devotion to the Virgin explains why the sculpture at Rievaulx is positioned above the entrance to the abbot’s lodging.

It was usual for depictions of the Annunciation to be placed close to doorways and other openings, such as on the gatehouse of the Cistercian abbey of Kingswood, Gloucestershire, which dates to around 1500.

Nicholas Love’s English translation of the Meditationes vitæ Christi includes passages on the devotional importance of the Annunciation. The text describes how the doors of heaven, closed by the sinfulness of Eve, were reopened by the Virgin’s humility and obedience at the Annunciation. Positioning Gabriel and Mary in close proximity to doorways and other openings therefore emphasised the symbolic reopening of heaven at the Annunciation.