How did our ancestors see Stonehenge? These objects tell the story of our changing understanding of the monument, from medieval myths and antiquarian theories to modern archaeology.

Select an image to see a larger version and to read more about the object.

The oldest surviving story of the building of Stonehenge was written about 1136 by Geoffrey of Monmouth (d.1154/5). He described how a monument called the ‘Giant’s Round’ was supposedly brought from Ireland by the wizard Merlin and set up on Salisbury Plain as a memorial to the British who were killed in a battle with the invading Saxons. This Norman verse edition, which dates from about 1480, is illustrated with Merlin dismantling or raising a trilithon. 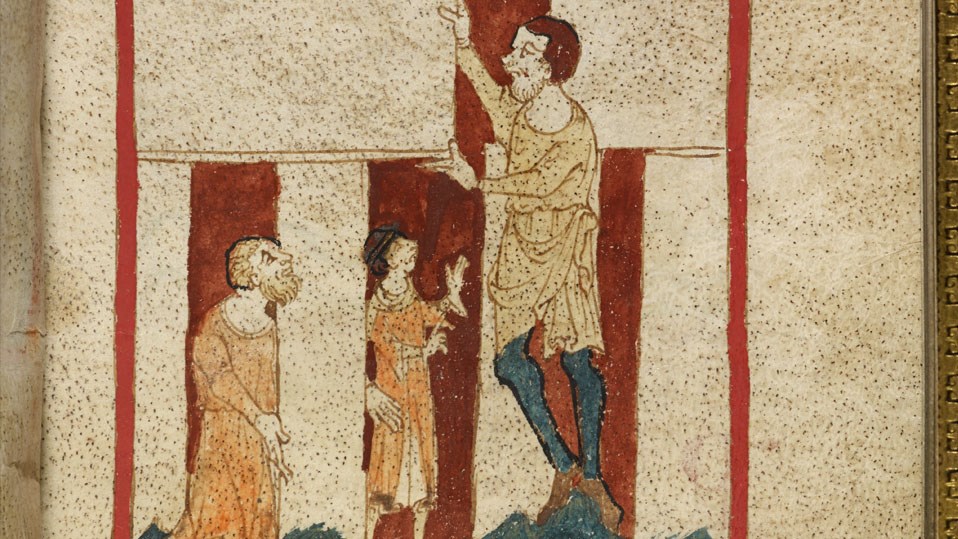 These drawings were prepared for a 1655 publication on Stonehenge by the architect Inigo Jones (1573–1652), who had been commissioned by James I of England (r. 1603–25) to investigate the monument. Jones, having carried out a thorough survey, thought that Stonehenge contained precise geometrical patterns and concluded that it had been built in the Roman period as a roofless temple. These drawings show the monument as Jones imagined it complete, with an additional central trilithon.

Image credit: © The Trustees of the British Museum

Although Stonehenge was more than 2,500 years old by the time of Roman Britain, a large number of Roman objects have been found at the monument. These include in excess of 1,500 fragments of pottery, as well as coins, pins and pieces of jewellery, such as this brooch fragment. Excavations in 2008 uncovered evidence that people were digging deep holes at the site in the Roman period too, and so Stonehenge could then have been a place for ritual activity. 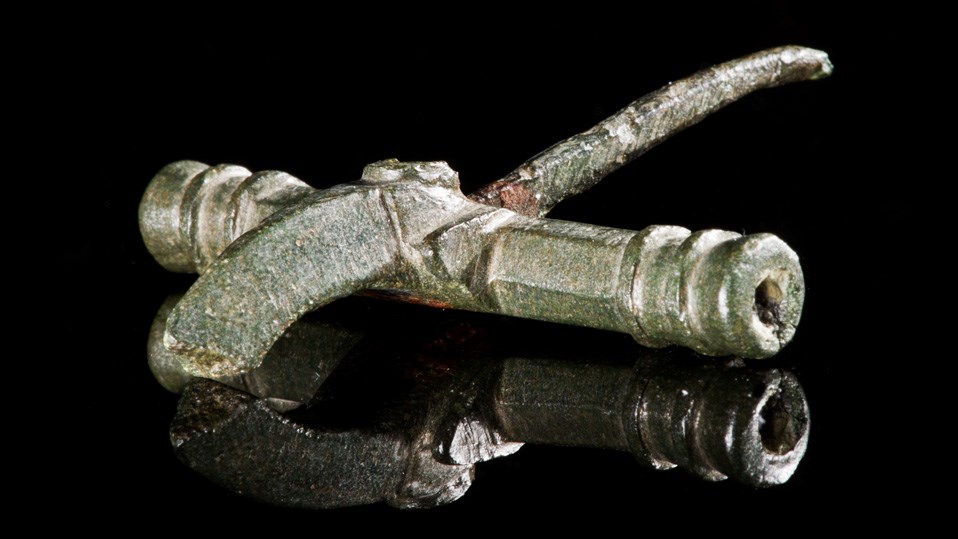 The physician Walter Charleton (1620–1707) claimed that Stonehenge was built by the early medieval Danes, as a coronation place of kings. Set out in his Chorea Gigantum (Giant’s Round) of 1663, his theory relied entirely on the 1642 publication Danicorum Monumentorum (Danish Monuments) by the Danish antiquary Ole Worm, which contained descriptions of megalithic monuments in Denmark. Charleton thought that some appeared similar to Stonehenge. 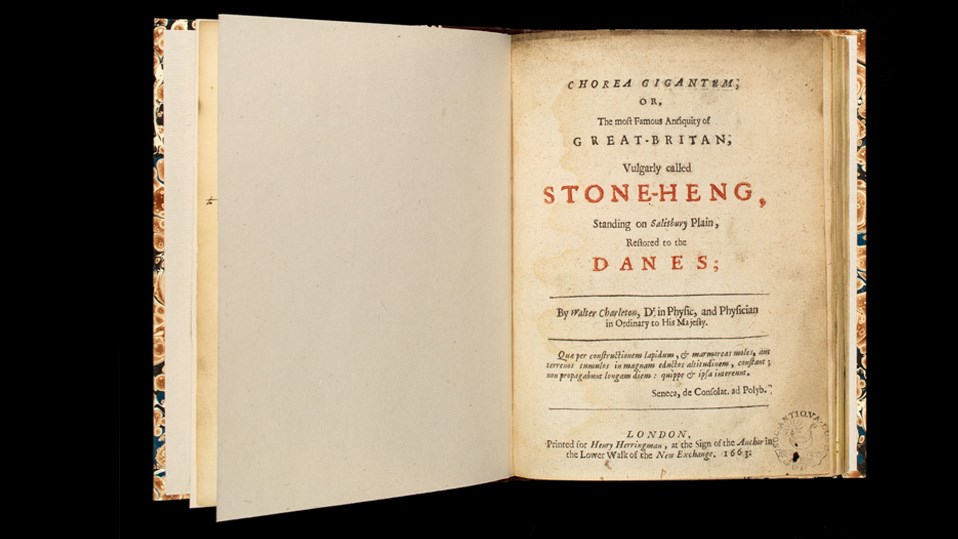 In about 1718, the antiquary and clergyman William Stukeley (1687–1765) obtained a transcript of John Aubrey’s Monumenta Britannica, and it had a deep influence on his career and thinking. In his 1740 volume, Stukeley clearly set out his argument for the role of the native Britons, and in particular the Druids, in the construction of Stonehenge. Moving far beyond Aubrey’s ideas, Stukeley went on to argue that Druidism had been an archaic Christian religion.

Image credit: From the collection of Lydiard House and Park 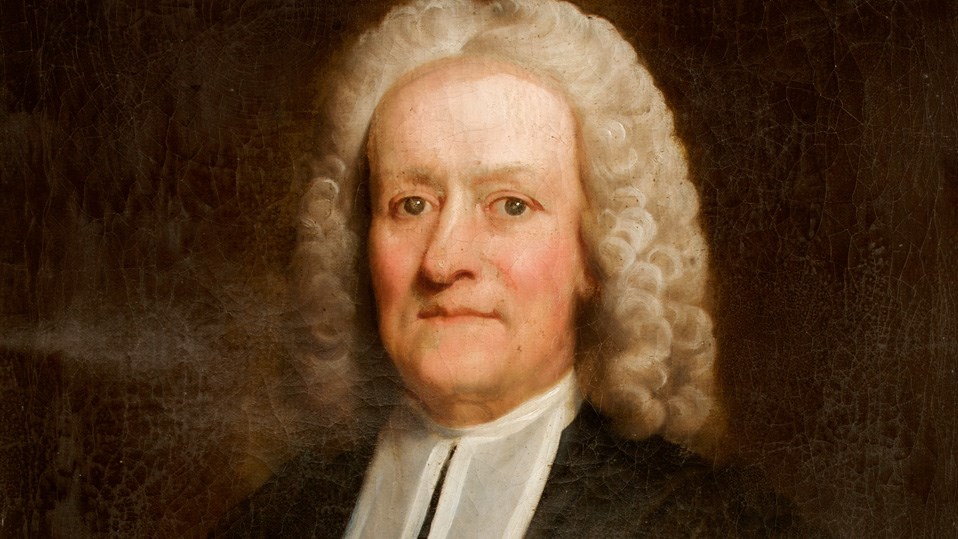 Theodolite, Made by Thomas Wright

Theodolite, Made by Thomas Wright

The antiquary and clergyman William Stukeley (1687–1765) spent most summers from 1719 to 1724 conducting surveys and making notes and perspective drawings of Avebury, Stonehenge and other monuments. This simple theodolite, a precise instrument used for measuring angles, is similar to the apparatus that he would have used. His careful observations led to the discovery of the Stonehenge Cursus, and also the Avenue, which, he noted, aligned on the midsummer sunrise.

Image credit: © The University of Oxford for its Museum of the History of Science 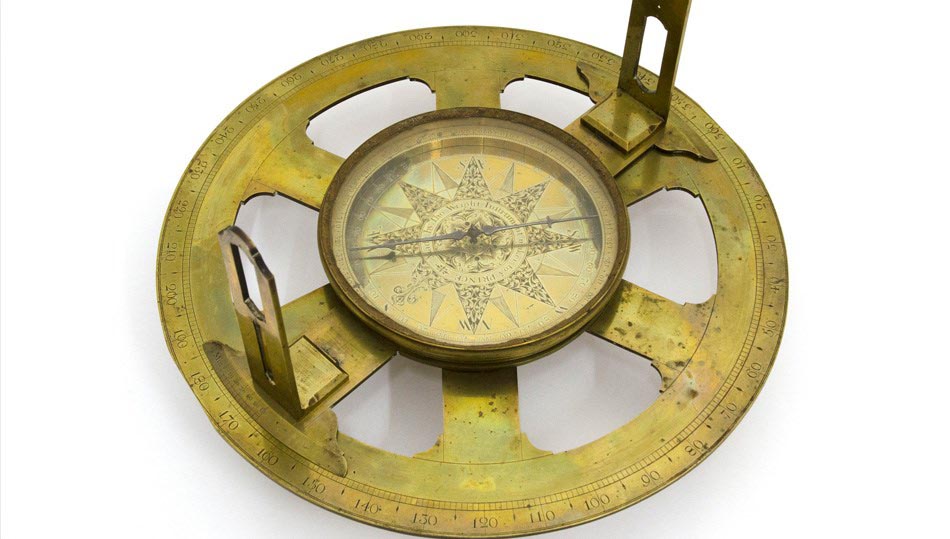 John Aubrey (1626–97) conducted detailed surveys and also made observations at Stonehenge. He noted that megalithic sites were found in areas of Britain that had not been conquered by either the Romans or the Danes. This led him to the important conclusion that these monuments were built by the indigenous population, specifically the pre-Roman Druids. Aubrey never published his work, and at his death it remained a collection of manuscript notes. 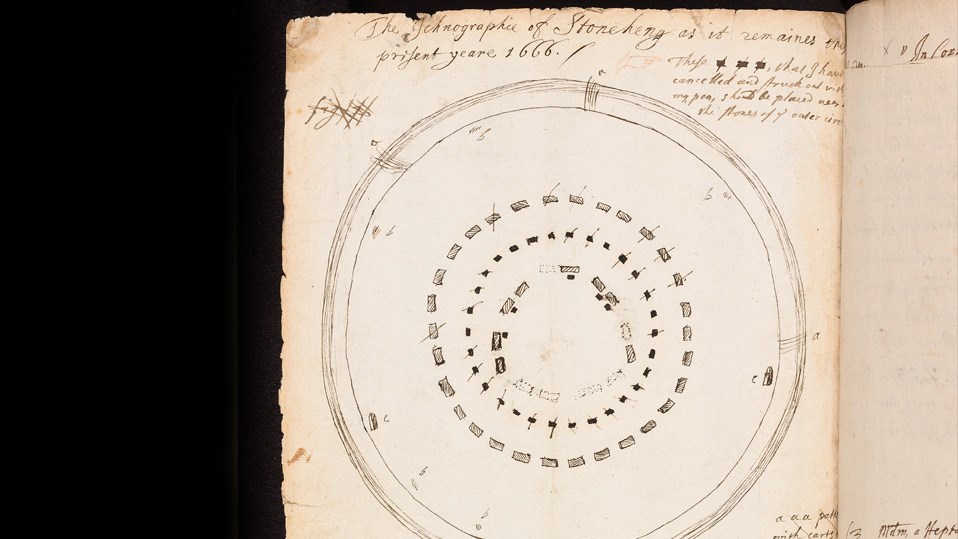 William Stukeley's idea that Stonehenge had been built by the Druids was taken up enthusiastically by scholars and the general public alike. This is a plate from Charles Hamilton Smith and Samuel Rush Meyrick's Costume of the Original Inhabitants of the British Islands. It depicts Stonehenge festooned with banners for a Druid festival, with attendees wearing a variety of medieval and prehistoric clothes and accessories. 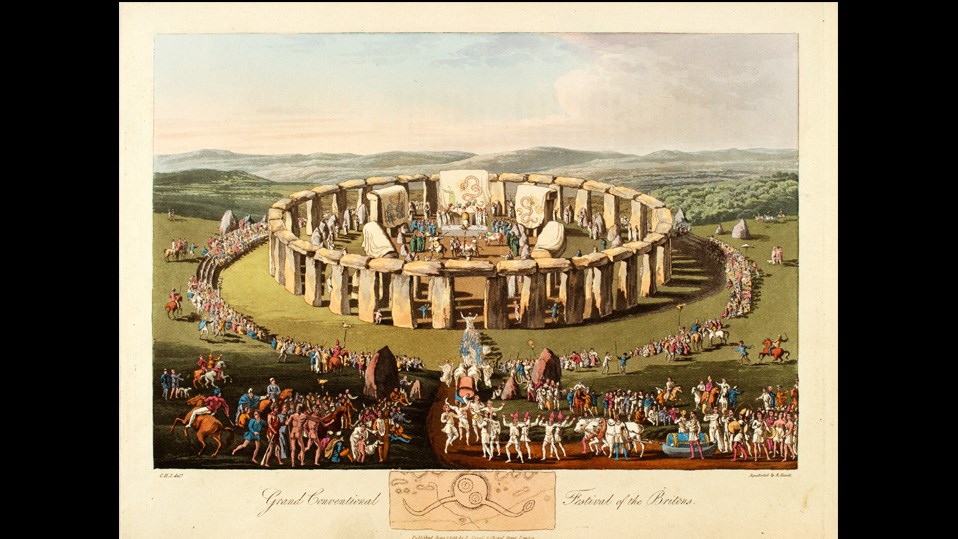 In 1952, a sample of charcoal from Stonehenge was sent to the scientist Professor William Libby in Chicago, United States. He applied his newly established method of dating by measuring the decay of radiocarbon. The result was 1848 BC. Later, when the information could be calibrated with tree-ring dating, the date of Stonehenge was pushed back to a millennium earlier. Today, we have nearly 70 radiocarbon dates from the site and our understanding of the dating of Stonehenge is more detailed than ever before. 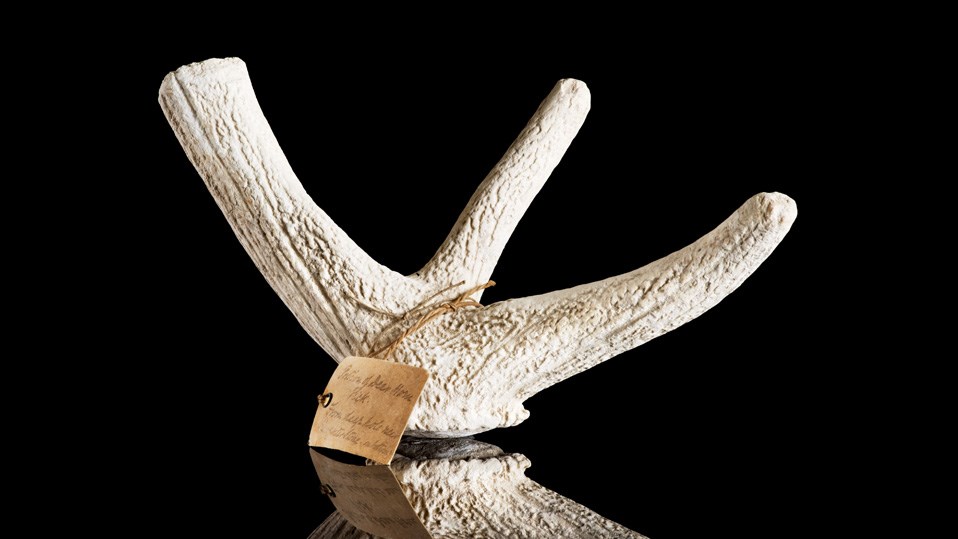 After William Stukeley's 1740 publication, various 'friendly societies' were inspired to adopt the name of the ancient Druids. By the late 19th century different groups had increasingly sophisticated ceremonies and initiation rites. Many of their medals and costumes featured images of Stonehenge, such as this sash of the United Order of Ancient Druids. By this time, archaeologists had realised that Stonehenge was much older than the Iron Age Druids. 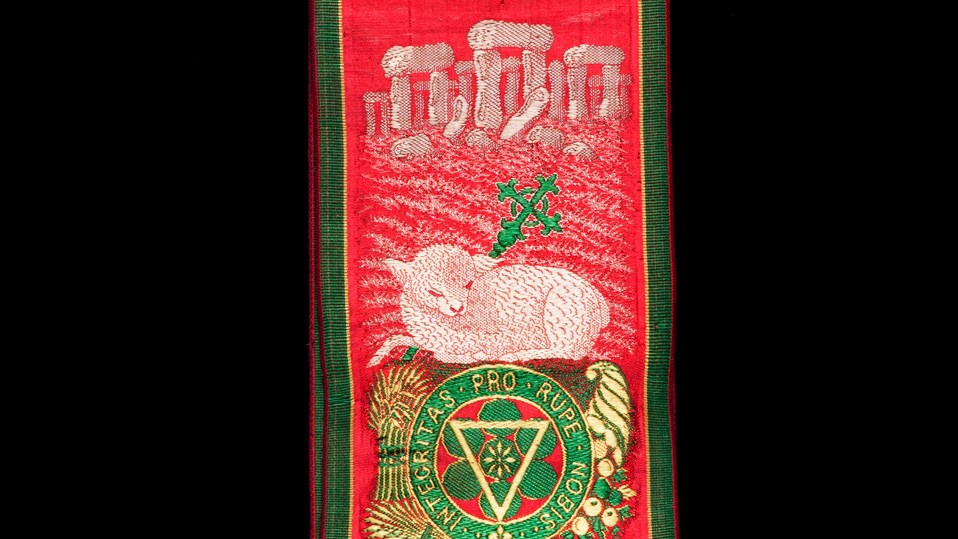