The last member of one of England’s great medieval dynasties, Lady Anne Clifford became something of a legend in her own lifetime, and has remained a celebrated figure in the history of northern England ever since. 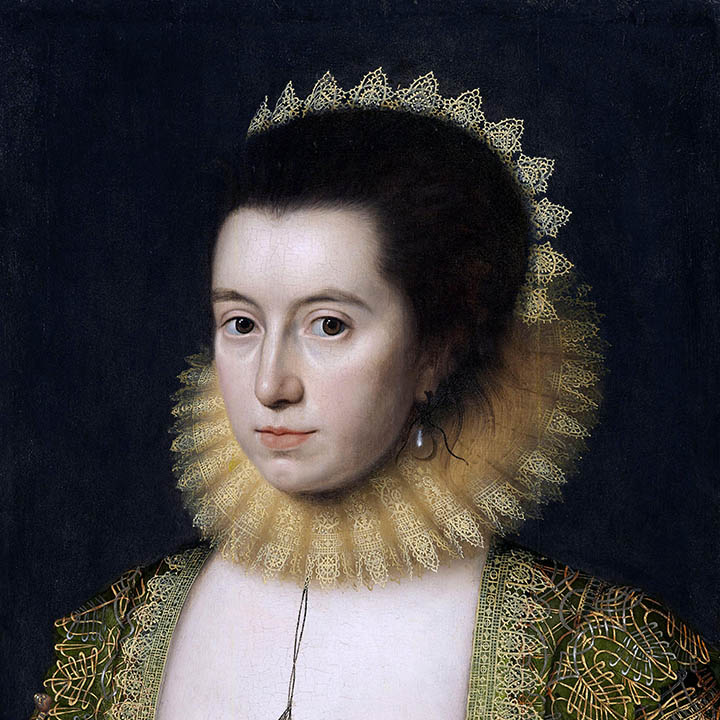 Lady Anne erected this monument, the Countess Pillar, at Brougham in 1656. It marks the spot near Brougham Castle where she and her mother, Margaret, had ‘a grievous and heavy parting’ in 1616, a month before Margaret’s death

Lady Anne was born in 1590, the daughter of George Clifford, 3rd Earl of Cumberland, and his wife, Margaret. As a little girl she was said to have been ‘much beloved’ by Queen Elizabeth.

The Clifford family estates in northern England were vast, and included five great castles in Westmorland and Yorkshire. Anne’s two brothers died young, and as the only surviving child of the 3rd Earl, she might have expected to succeed to the estates when he died in 1605. But instead he left them to his brother, Francis, and to Francis’s heirs. In doing so he had breached an entail dating back to the early 14th century, under which they should have passed to the eldest heir, whether male or female – which was Anne.

So began Anne’s long legal battles against her uncle and later his son Henry in defence of her right to inherit. Yet all her efforts to have the will set aside came to nothing. Despite the unwavering support of her mother, Margaret, Anne wasn’t able to secure her family’s lands and castles.

To add to her sorrows, neither of her marriages seems to have brought her lasting happiness. In 1609 she married Richard Sackville, 3rd Earl of Dorset, a notorious wastrel and spendthrift. He died in 1624 and in 1630 Anne married Philip Herbert, 4th Earl of Pembroke, himself widowed with many children. The couple were soon estranged, and during the Civil War (1642–51) Lord Pembroke sided with the Parliamentarians, while Lady Anne remained loyal to the king.

Meanwhile she continued to refuse to accept any offers of a settlement from either Francis (who died in 1641) or his son, Henry. Only the possibility that Henry would have no heir, in which case the Clifford inheritance would revert to her, gave Anne any prospect of success.

Her hopes were finally fulfilled when Henry died in 1643. But thanks to the Civil War it was only six years later – by which time she was nearly 60 – that Anne finally felt it was safe to leave London and return to her lands in the North.

The south curtain wall at Brough Castle. On the right is Clifford’s Tower, restored by Lady Anne, who always occupied the chamber at the top of the tower when she stayed at Brough

‘REPAIRER OF THE BREACH’

The last three decades of Lady Anne’s life were highly creative. She found her estates badly neglected and the five Clifford castles – Brough, Brougham, Appleby and Pendragon in Westmorland and Skipton Castle in Yorkshire – ruined or in poor condition. Pendragon had been abandoned since the reign of Edward III, and Brough since a devastating fire there in 1521, which had left ‘nothing … but the bare walls standing’. The other castles had been damaged during the Civil War.

Gradually, Lady Anne restored her estates, and repaired all five castles. Conscious of their antiquity, she took great pains to restore them in a style in keeping with what was already there.

Anne was a staunch Royalist, but when it was suggested to Oliver Cromwell that he should stop her building, he is said to have replied: ‘Let her build what she will, she shall not be hindered by me.’ Since she had no soldiers, her castles would have been useless as fortresses. No doubt Cromwell realised this, and appreciated that what she was really doing was converting castles into country mansions, on a scale appropriate to her dignity.

Lady Anne Clifford’s tomb in St Lawrence’s Church, Appleby, with its magnificent display of heraldry expressing her pride in her family’s past

Lady Anne was intensely aware of her dynastic standing. Her interest in her family’s history and her determination to gather evidence in support of her claim to their estates led her to compile three great volumes of material on Clifford family history – her ‘Greate Books of Record’, which remain an essential source for the history of the Clifford family.

She also gave visual expression to her pride in her ancestry on her own tomb in St Lawrence’s Church in Appleby. It bears no image, just 24 shields, which set out her lineage in an impressive display of heraldry.

Her diaries record the pleasure she took in visits from members of her family – especially if she could send them off to inspect and admire one of her castles. She set up inscriptions to mark her restorations, each usually ending with a passage from the book of Isaiah, which reveal how she saw herself:

And they that shall be of thee shall build the old waste places: though shalt raise up the foundations of many generations: and though shalt be called, the repairer of the breach, the restorer of paths to dwell in.

Lady Anne remained on her northern estates for the last 27 years of her life, ruling over them as a benevolent despot and travelling from one castle to the next with her household. She made each in turn the base from which she exercised her influence and authority, as befitted the last bearer of the Clifford name.

Despite her upbringing at court, and the fact that her two husbands were both courtiers, it is striking how as soon as she could settle back in the North, Lady Anne turned her back on metropolitan fashions, preferring those of earlier generations. This was just one of the ways in which she showed the independence of mind that was typical of her character – a character also shaped by many years of frustration and disappointment.

She died at Brougham Castle on 22 March 1676, in the room where her father had been born and her mother had died, and was buried in the family vault in St Lawrence’s Church, Appleby.