Margaret Brotherton was a wealthy and influential noblewoman, whose business acumen, as well as a series of untimely deaths, made her one of the richest women in England. 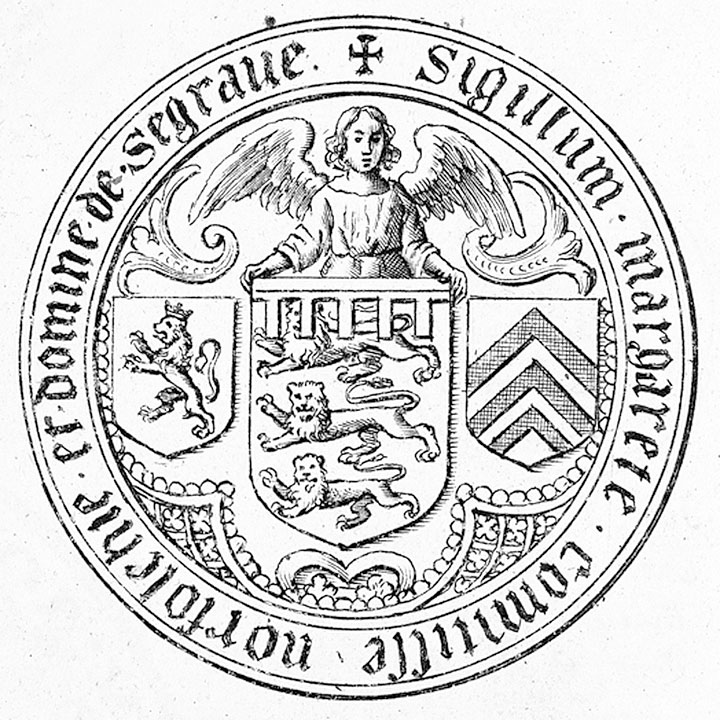 This late medieval carving of a woman’s head is one of five at Framlingham Castle that may be likenesses of the Mowbrays, Margaret Brotherton’s descendants

The granddaughter of King Edward I, Margaret was a formidable woman. Although her history is less well known than that of some of her female contemporaries, she occupied an important position in medieval England.

Born in about 1320 to Thomas of Brotherton, 1st Earl of Norfolk, and Alice Hales, Margaret was married by the time she was about 15 – as was common for a girl of the time. Her husband was John, Lord Segrave, a soldier and baron, with whom she went on to have four children. Her second child was born by the time Margaret was 18.

In 1338 she succeeded with her sister, Alice, to the Brotherton family estates – their only brother had died the year before.

By about 1350 the redoubtable Margaret was unhappy – and determined – enough to seek a divorce from Lord Segrave. Ignoring a royal ban on her travel, she set out for Rome in person to plead with the Pope. Unfortunately for Margaret, she wasn’t able to secure a divorce and was arrested on Edward III’s orders for violating his travel ban.

Lord Segrave died in April 1353, and soon afterwards (probably in 1354) Margaret married Lord Walter Mauny. She was soon in trouble with the law again, and had her land seized, for marrying him without securing a marriage licence from the king. Following her trial, two of the king’s serjeants were ordered to ‘lead her as quietly and honourably as they can’ to Somerton Castle in Lincolnshire, where she was detained.

By May 1354, however, the Brotherton estates had been restored to Margaret, and in 1355 she was pardoned for both her marriage to Lord Mauny and her illegal travel.

After Lord Mauny’s death in 1372, Margaret – a shrewd businesswoman – dedicated the last 27 years of her life to managing her vast estates. By now she had inherited her Brotherton estates, Segrave lands and a portion of Lord Mauny’s war profits, and in 1382 the entire Brotherton inheritance came into her hands after the death of her sister’s heirs.

Most of her time was now spent at Framlingham Castle in Suffolk where, with no dependants, she could spend her money as she chose: on an extravagant lifestyle and a great deal of entertaining.

An account from 1385–6 of Giles of Wenlock, keeper of the household, reveals Margaret’s flamboyant lifestyle. In that year alone 70,321 loaves of bread were consumed and 40 casks of red herring, 72½ carcases of beef, 9 wild boar, 151 carcases of pork, 697 carcases of mutton, 24 pounds of saffron and gallons of red and white wine from St Emilion and Gascony were bought.

Framlingham Castle today, reflected in the water of the medieval mere. Its almost perfectly preserved stone walls still look much as they did when Margaret Brotherton lived there

During her years as a prominent widow, Margaret enjoyed close ties with various members of the nobility. They included John of Gaunt, Duke of Lancaster, with whom she exchanged new year’s presents, Henry Bolingbroke (later Henry IV), who sent his son John to be educated at Framlingham, and Richard FitzAlan, Earl of Arundel, who – although he was unrelated – remembered her in his will as ‘my mother of Norfolk’.

By the 1370s Margaret had self-styled herself as the Countess Marshal. Her late father’s hereditary position of Marshal of England had gone to the Earl of Salisbury. But this didn’t stop the spirited Margaret from adopting the title, becoming widely known as Margaret Marshal. Although she sought to perform the official duties of the position too, this claim seemed a step too far and it remained a largely symbolic title.

On 29 September 1397 Margaret was elevated from Countess to Duchess of Norfolk. Two years later, at nearly 80 years old, she died and was buried at Greyfriars in London.