The collection at Apsley House reflects the life and achievements of Arthur Wellesley, 1st Duke of Wellington – a military leader and later a politician, who is most famous for defeating Napoleon Bonaparte at the Battle of Waterloo (1815).

We've asked the Keeper of the Wellington Collection, Josephine Oxley, to introduce herself and highlight some of her favourite objects in the collection at Apsley House.

My name's Josephine Oxley and I'm the Keeper of the Wellington Collection. This means that I look after the 1st Duke of Wellington's wonderful home, Apsley House. I'm also responsible for Wellington Arch which has three floors of exhibition space.

Apsley House has an outstanding collection of fine and decorative arts, so it's difficult to pick a favourite object. For me, Diego Velázquez’s painting, 'Portrait of a Gentleman' is a very masterful work and is definitely one of my favourites.

I've worked with collections for a long time. I got into the job because of my love of history and art. I love working in an historic house with a collection in context. It's very special when that collection has been put together by one person, like at Apsley House. 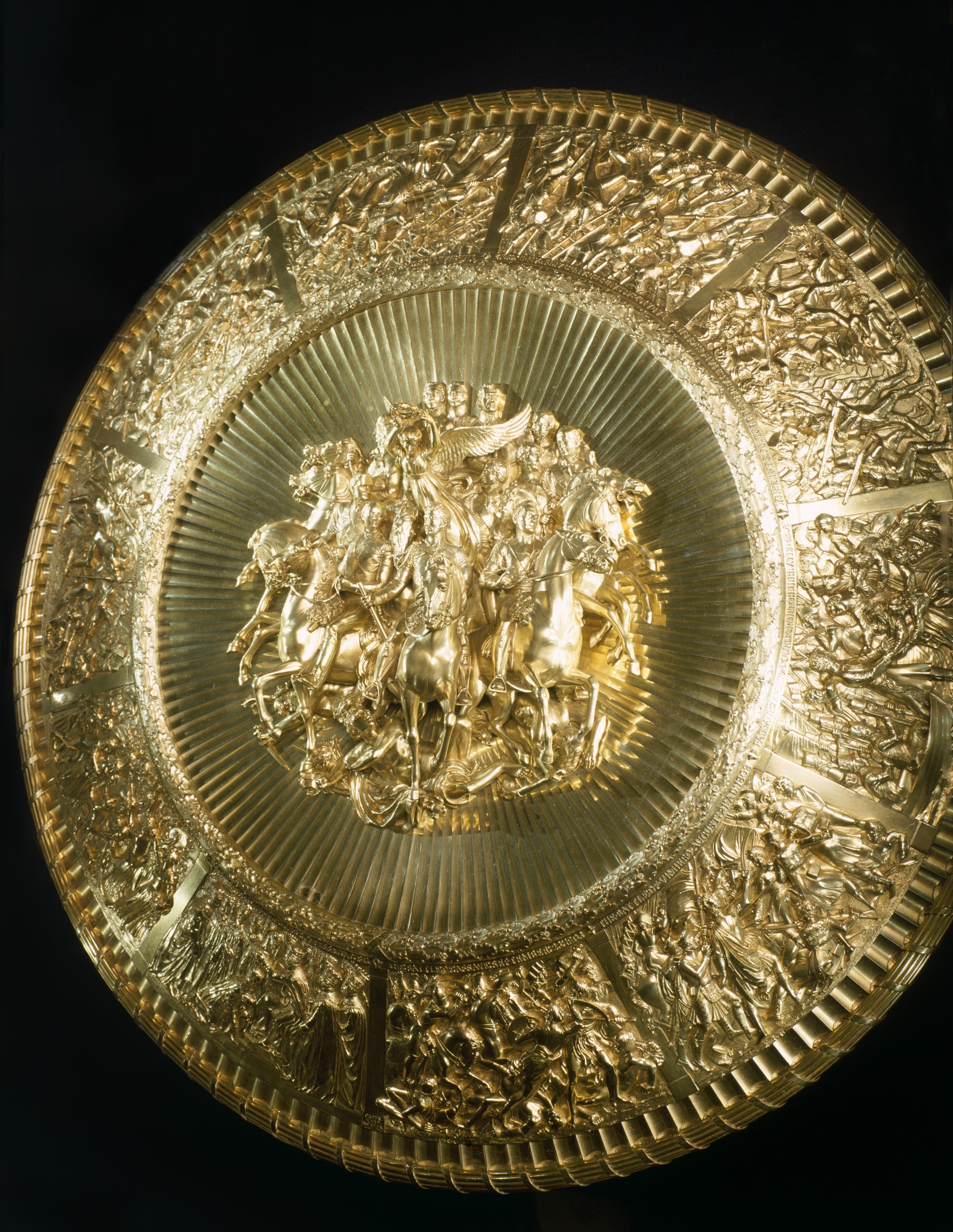 Description: After Wellington's victory over Napoleon at the Battle of Waterloo in June 1815, he became a national hero. This shield was a gift from the bankers and merchants of London. It was designed by Thomas Stothard who was inspired by the classical description of Achilles's shield in Homer's Iliad. It's a large object (over one metre wide), made from silver gilt, which took many years to design and make. It was finally given to the Duke in 1822 along with two giant candelabras. The shield cost the bankers and merchants £1,000 (which is over £1 million today).

This object is a celebration of Wellington's military victories. Around the outside of the shield you can see ten sections of decoration which depict all of the Duke's famous battles from 1803 to 1815. Wellington sits on a horse in the centre of the shield and is surrounded by his generals as he is crowned the Angel of Victory. The shield was displayed every year at the Waterloo Banquets held at Apsley House from 1820 to 1852.

Further Learning Idea: Design your own ceremonial shield, highlighting your achievements for everyone to see. Think about using symbols and imagery that reflect your story. 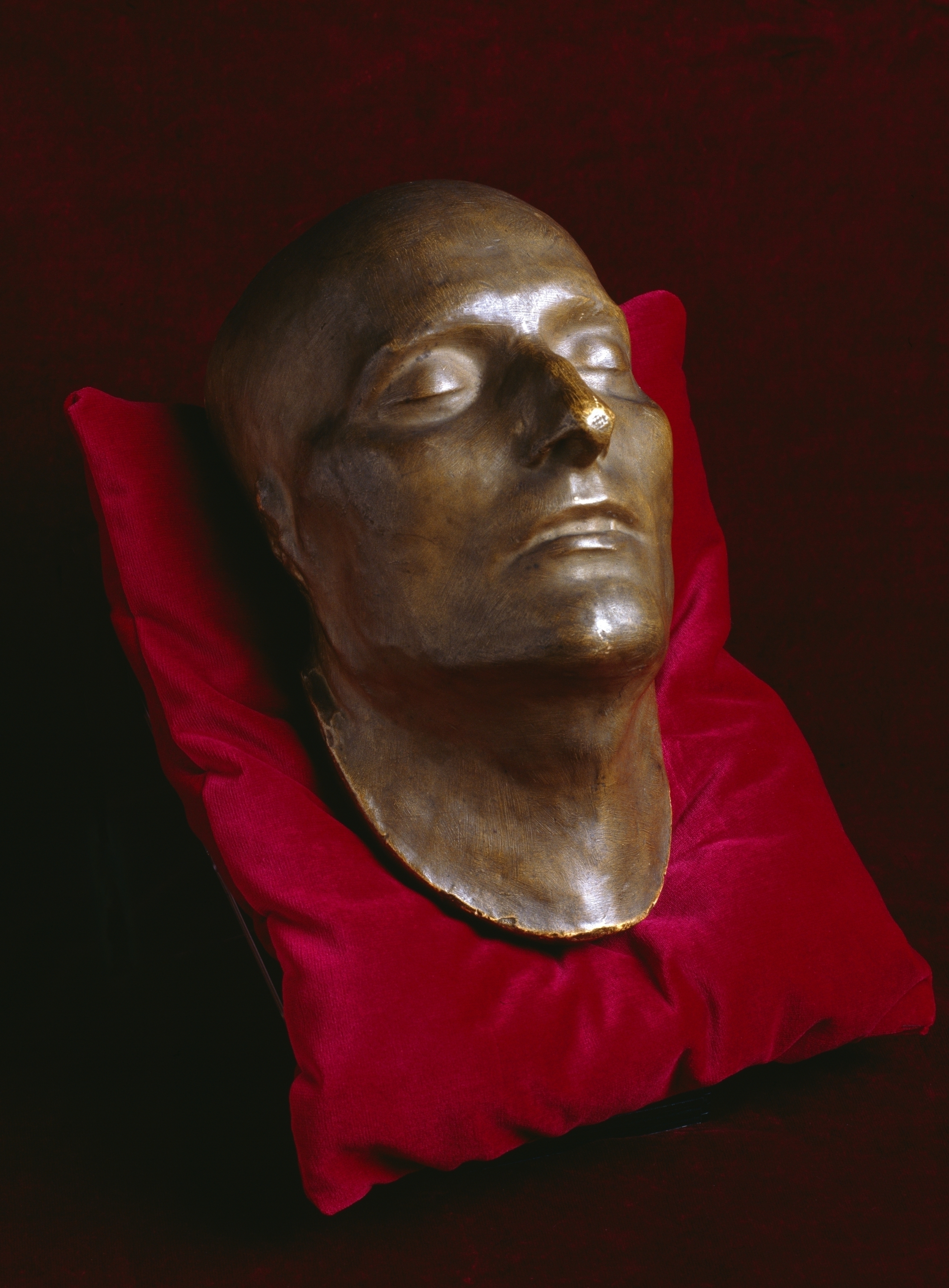 Description: Death masks were often made for painters and sculptors so that they could use them to create images of people who had died. By the 19th century, it was common to make death masks of famous people and display them as objects in their own right. The original mask was made of plaster and would have been a direct impression of Napoleon's face when he died in 1821. This is a copy, made in bronze.

After his defeat at Waterloo in 1815, Napoleon was exiled to the remote island of St Helena because both the victors, and France, didn't know what to do with him. He was imprisoned on the island by the British, in a house called Longwood where he died on 5 May 1821.

The Duke of Wellington owned many items related to his enemy, Napoleon. Some, like the sculpture 'Napoleon as the Peacemaker' by Canova, were given to the Duke to celebrate his achievement in defeating Napoleon at the Battle of Waterloo.

Further Learning Idea: Research Napoleon's exile to St Helena. Find out how he got there, who went with him, and consider what his final days there may have been like. 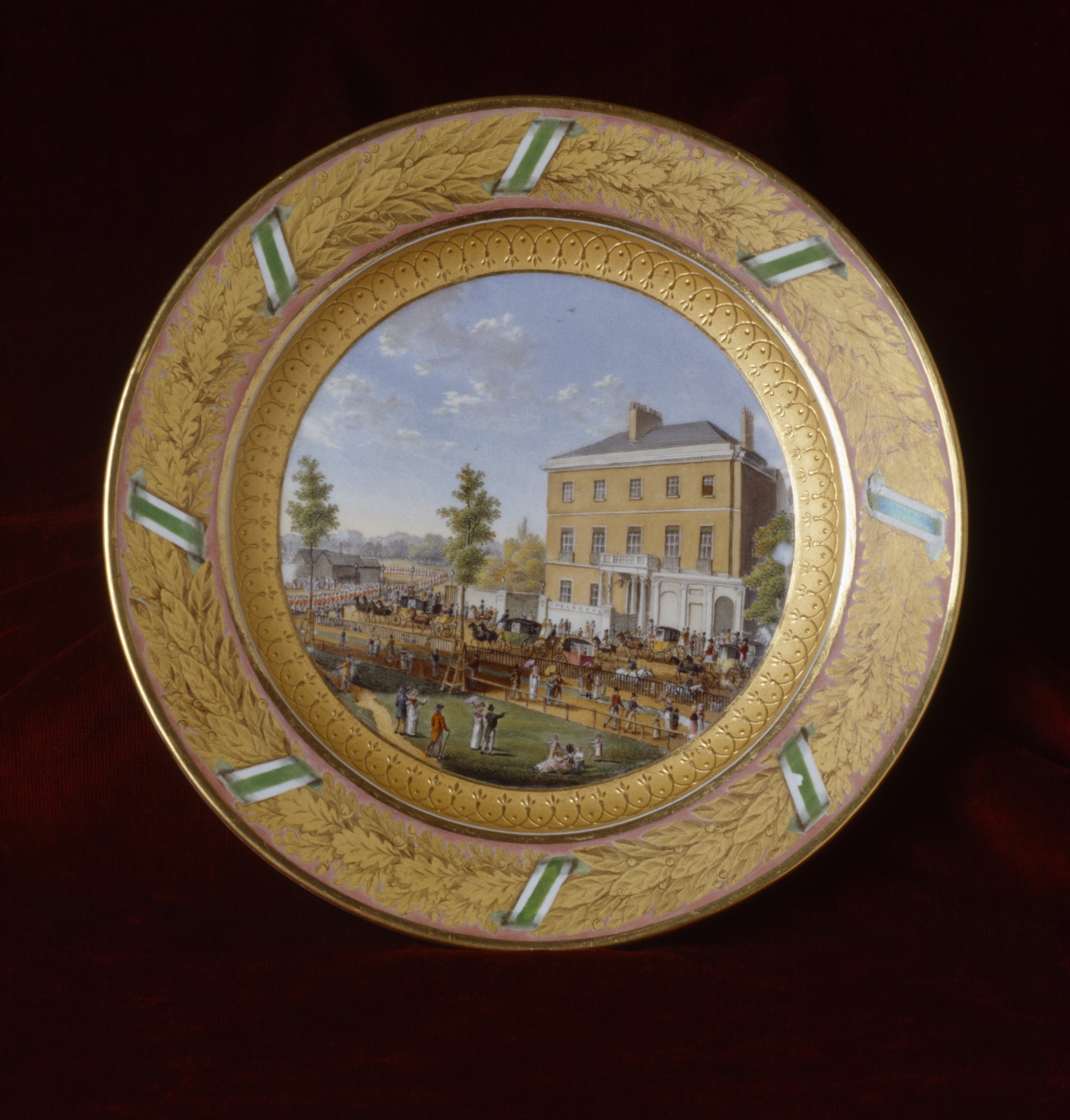 Dessert Plate from the Saxon Service

Description: Sometimes you can find clues about the story of a historic house in unexpected places. This little porcelain dessert plate is part of a large dinner service given to the Duke of Wellington by King Frederick Augustus IV of Saxony (now part of Germany). It was made at the famous Meissen porcelain factory in Dresden and was personalised for Wellington. The plates are hand-painted with pictures of scenes from his life.

This example shows what Apsley House would have looked like when it was first built in the 1770s by the celebrated architect, Robert Adam. Throughout the 1820s, the Duke had two big extensions built which changed the house significantly. As we have few images showing what the original house would have looked like, the image preserved in the decoration on this plate is a very valuable source. It helps us understand more about the early history of Apsley House and how the Duke of Wellington chose to develop his London residence.

Further Learning Idea: Find out more about your local area through photographs and paintings. What can these sources tell you about life in the past?

The State Dining Room, completed in about 1819. On display is the centrepiece of the Portuguese Service, presented to Wellington in 1816

Description: This silver gilt dining table centrepiece is one of the biggest objects at Apsley House. It was designed by a leading painter at the Portuguese royal court and made in Lisbon, Portugal. One hundred and fifty craftsmen worked for nearly four years to create it. The centrepiece was presented to the Duke of Wellington by the Portuguese nation as a thank you for his part in driving the French army from Portugal, and later Spain, during the Peninsular Wars (1807-14). It was sent by ship in 55 packing cases and arrived in Portsmouth in 1816.

The whole service consists of over a thousand pieces and it was always used when Wellington hosted his famous Waterloo Banquets at Apsley House.

Further Learning Idea: Take on the role of a court official in Portugal checking over the centrepiece before it's sent to the Duke of Wellington in England. Work out an average for the number of pieces in each crate: there are 1000 pieces packed in 55 crates.

Description: We can tell a lot about a person from the objects that they bought and the artworks they commissioned. This painting, by Sir David Wilkie, was the most expensive painting that the Duke of Wellington commissioned.

He asked Wilkie to paint a picture of a group of old soldiers gathered outside a tavern but Wilkie thought that he could do something more interesting and decided to incorporate Wellington's victory at Waterloo. In the end, it took him six years to finish the painting.

In the centre, you can see a group of soldiers, including some Chelsea Pensioners (old retired soldiers), poring over a copy of the London Gazette reading the Waterloo Despatch. The Despatch was Wellington's official military letter sent to the King and Parliament after his victory at the Battle of Waterloo. The scene is set off the King's Road with the Chelsea Hospital (where the Chelsea Pensioners live) on the left.

Further Learning Idea: Imagine that you are going to commission a special artwork. It could be a person, a pet, a place, anything you like. Write a detailed set of requirements for the artist. Test your instructions by asking someone else to use them to produce your chosen picture. 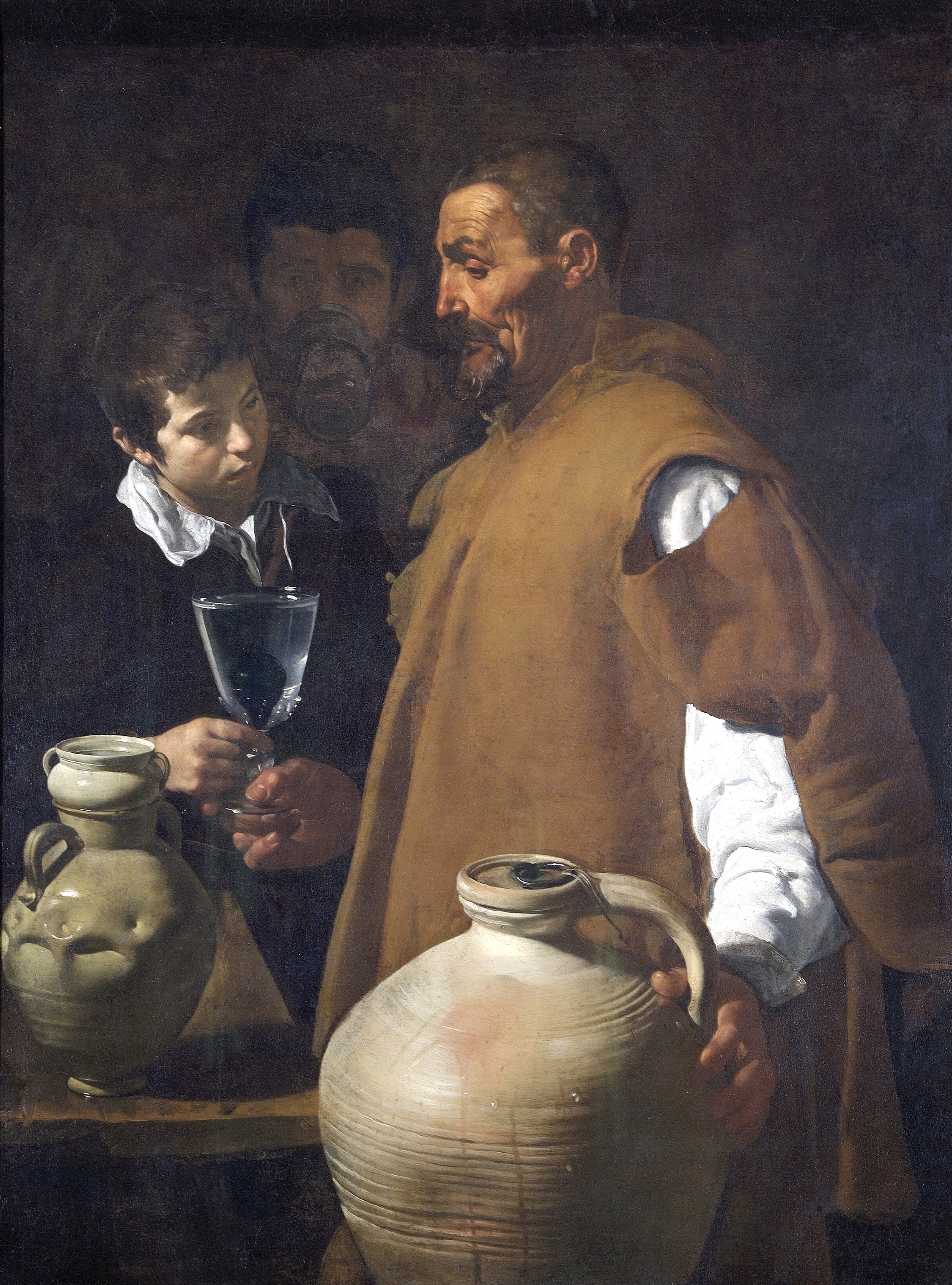 'The Waterseller of Seville' by Diego Velázquez

Description: This is one of the most famous paintings of the 17th century. It was painted when the Spanish artist, Velázquez, was only 20 years old.

Water sellers would have been a common sight in the 17th century as people didn't have running water in their homes. We know that the boy in the portrait must have come from a wealthy household as the glass he is carrying is very good quality. It may have come from Venice, a famous glass-making city.

Velázquez shows in this work that he can paint every type of surface: glass, pottery and cloth. He uses the light in a clever way to highlight the faces of the old man and the boy.

Collecting masterful artworks like this marked Wellington as a wealthy and cultured person in his own time. The art collection that the Duke amassed at Apsley House is regarded today as an internationally important collection of paintings, silver and porcelain.

Further Learning Idea: Take inspiration from Velázquez and set up your own portrait. Choose items for your portrait that have different textures so that you can practice depicting a variety of materials and shapes.