Our collection relating to Battle Abbey tells the story of the Battle of Hastings, the Norman Conquest, and a medieval monastic community.

We've asked one of our curators, Kathryn Bedford, to introduce herself and highlight some of her favourite objects in the collection at Battle Abbey.

I'm Kathryn Bedford, the Curator of Collections and Interiors in the South East. This means that I look after all the objects from all of our sites in Hampshire, Kent, Surrey and Sussex. The objects I look after range from Stone Age axes, to carpets and furniture, as well as a machine to measure nuclear bombs.

I started working in museums after I finished a PhD in medieval history and gained experience with a wide variety of collections and historical periods before I came to English Heritage. I enjoy being able to work across multiple sites and collections. There is always so much to learn!

Trying to choose a favourite object is really difficult – like trying to pick between your children! At Battle Abbey, I'm particularly fond of the inscribed slate. I love how you can piece together its history and learn so much from a single, small, broken object. 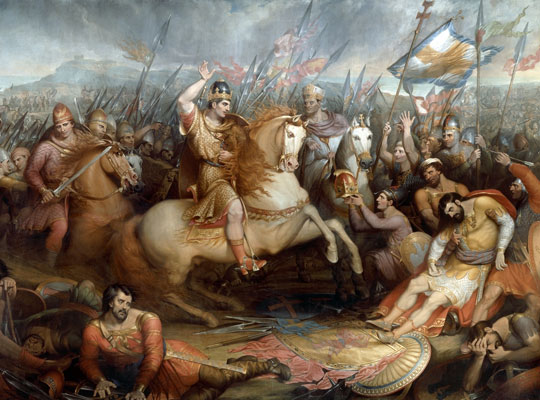 'The Battle of Hastings’ by Frank Francis Wilkin (1791–1842). This enormous Victorian painting, which now hangs in the great hall at the abbey, depicts William the Conqueror finding the dead Harold on the battlefield. Wilkin allegedly modelled William on Sir Godfrey Vassall Webster, fifth baronet, the then owner of Battle Abbey
© Historic England

'The Battle of Hastings' by Francis William Wilkin

Description: Many of the people who have lived at Battle Abbey over the centuries have sought to enhance their own reputations by emphasising the site’s connection to the Battle of Hastings and its important place in British history. One of these people was Sir Godfrey Vassall Webster, 5th Baronet (1789–1836) who inherited the property in 1810.

Godfrey refitted and extended his house in the gothic style, reflecting the Abbey’s medieval past. He installed wood panelling, a minstrel gallery, stained glass and commissioned a suite of furniture from London furniture maker George Bullock. One of his major commissions was this large-scale painting (5 x 9.5 m) of the Battle of Hastings from artist Francis William Wilkin which dominated the great hall – the first room that visitors would enter. Sir Godfrey himself was the model for William the Conqueror in this painting and it's been suggested that other figures represent people from his household. Godfrey would even joke to his visitors that a stuffed horse hung over the fireplace was identical to the one owned by the William the Conqueror.

Shortly after the painting was completed, Godfrey became the first owner of Battle Abbey to open the site to the public, offering tours once a week. This began a practice that continues today now that English Heritage cares for Battle Abbey.

Further Learning Idea: Consider a special event from history that you would want to commemorate in a painting like this one. Create an artwork to reflect the event that you've chosen. You could even use people you know as models for your piece, just like Godfrey did. 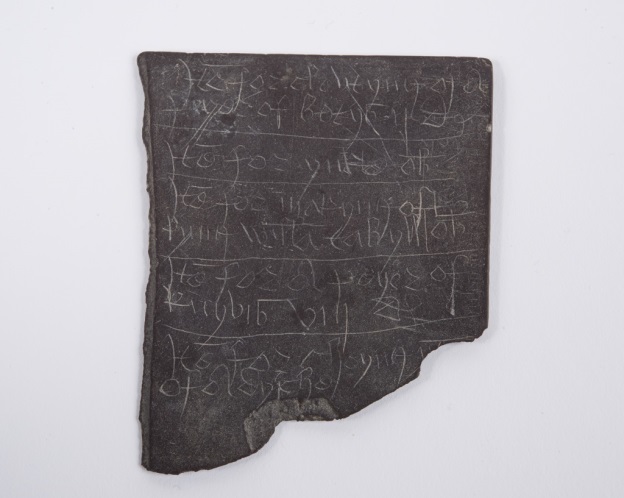 Description: Objects in our collections offer us an insight into how materials have been used and reused over time. One side of this slate is engraved with stave lines for musical notation, almost certainly for use in teaching music. The fact that they're five-line staves points towards polyphony (two or more lines of independent melody played together rather than a chant). It's likely that this technique was taught and used within the abbey. The variety of slate that this fragment is made from is not local to Battle Abbey and is of good quality. This suggests that it was specially bought rather than being made on site. From the condition of the music inscription, it doesn't appear that the slate was ever used for its intended purpose. It may have broken shortly after it was bought.

After it was broken, the slate was turned over and the other side (shown here) was used to record accounts. The way the writing fits onto the area of the slate shows the order in which these two events took place – the words fit to the damaged edge. The scratched inscription includes payments for the repair of some boots, purchase of ink, and 'repair of King William's table'. The word 'table' here is probably an abbreviation of 'retable' – a decorative structure or artwork placed behind an altar – and refers to a painting of William the Conqueror.

The slate was found with tuning pegs (below).

Further Learning Idea: As we can see from this object, recycling is not a new idea. Select an object from your home, classroom or local area and make a plan for how it could be recycled to make something new. 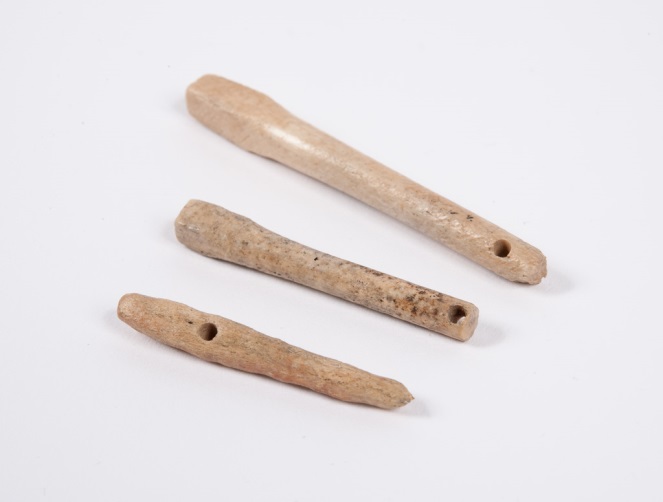 Description: Archaeologists sometimes unearth interesting finds that can tell us more about life at our historic places.Twelve tuning pegs for stringed instruments were discovered during excavations at Battle Abbey. The squared ends on most of the pegs were to allow a shaped tool to be used to turn the peg during tuning, much like we might use a spanner to tighten a nut.

All but one peg show patterns of wear around the ends which suggest they've been used, but there is no damage around the holes for the string. We can infer from this that the instruments didn't use metal strings, but softer materials like animal gut or horsehair.

The length and shape of these tuning pegs can be used to work out what instrument they came from. It seems that we have pegs from at least three different instruments: long pegs from a harp, shorter ones from a fiddle or rebec, and one of a completely different shape which was used on a boxed (keyboard-type) instrument like a zither.

Further Learning Idea: Discover the kind of songs played at Battle Abbey and uncover the meaning behind the Battle Abbey carol with our learning activity. 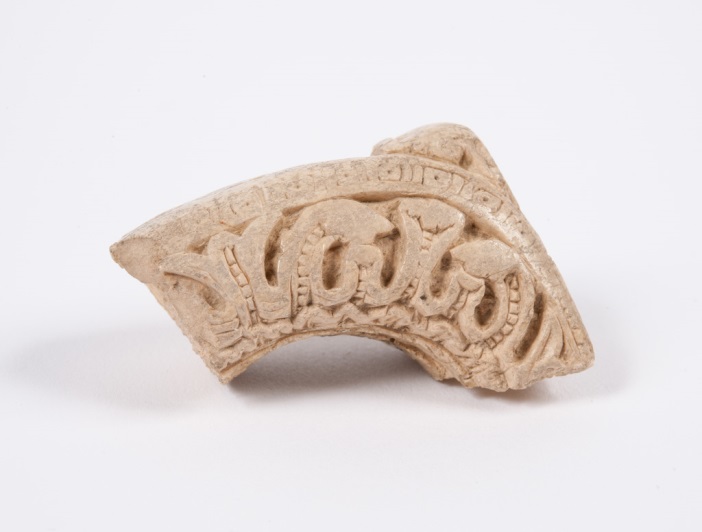 Description: This small piece of carved walrus tusk was once part of a pastoral staff. These were carried by bishops and other high-ranking church officials, including abbots, to represent their role as a shepherd to their congregations. They were a symbol of the Church's authority.

The Tau Cross is a 'T' shaped cross that was used in England both before and after the Norman Conquest. It started to go out of fashion in the early 13th century.

The decoration of acanthus leaves and beading on the cross is typical of very early 12th-century design but the details are so similar to carvings found at Canterbury Cathedral that it's been suggested the staff came from that city. A possible explanation for these similarities is that Abbot Henry, arrived at Battle Abbey in 1096 having previously been Prior of Canterbury.

The irregular wear pattern on the carving of this fragment has led to suggestions that it might have been reused as a burnishing tool for gilding manuscripts after the staff broke. This idea has been questioned because the fragment's shape would have made it uncomfortable to hold at a time when custom-made burnishers were readily available.

Further Learning Idea: Use this image of the Tau Cross fragment, and the information you've found out about it, to create a reconstructed image of what the 'T' shaped cross may have originally looked like.

Description: This pot contains traces of vermilion pigment (a bright red colour), which was used from the Greek and Roman periods to the 19th century, and was almost as expensive as gold leaf. Artists used small pots like this one because they only made up as much paint as they needed that day to prevent wastage. Paint was made by combining powdered pigment with 'glair' (egg white and water) to create a liquid.

However, this object wasn't originally made to hold paint. Recent research suggests it was originally used in the making of lead oxide. A lead pot, usually larger than this, would be filled with vinegar or urine and left to heat up in dung or compost. The lead oxide formed on the lid would then be crushed for use as pigment. This pigment would be used to create lead white paint.

Although monasteries are known for being places where illuminated manuscripts were created, by the 15th century most high quality books were actually being produced commercially. We wouldn't expect Battle Abbey to be using vermilion on new books at this time. What this pot might show is evidence that important books were being repaired at Battle Abbey.

Further Learning Idea: Find examples of illuminated manuscripts and design your own illuminated letter using our learning activity. You could use the first letter of your name or write out your favourite story or poem.

Description: This lead pilgrimage badge showing a crowned head is just 40mm long. It probably shows St Edward the Confessor as it is very similar to another badge found in London (where St Edward's cult flourished). It could also be St Edmund.

Pilgrim badges were common from the 14th century until the Protestant Reformation in the 16th century. They were small, mass-produced tokens usually made from cheap metals like lead or pewter and were decorated with the saint whose shrine had been visited. These badges could be worn by pilgrims or put on display to show which shrines a person had visited –much like tourist souvenirs today.

There's no way of knowing who this badge belonged to. Maybe it belonged to a member of the community at Battle Abbey or one of the pilgrims who visited the site? Battle Abbey is known to have possessed at least 175 relics and many of these were given to the abbey by William the Conqueror as part of his penance for the bloodshed at the Battle of Hastings. Objects that would have been popular with pilgrims included a fragment of the 'true cross' and the hair shirt and finger bone of St Nicholas.

Further Learning Idea: Take inspiration from this pilgrimage badge to design your own Battle Abbey souvenir. Think carefully about the decoration and choose a design that you think best represents the story of the site.