‘The land without music’ is how one German critic described England in 1904. There was perhaps some truth to the jibe – in the 18th and 19th centuries, England produced very few great composers. But the English still welcomed new musical experiences and London became a magnet for foreign-born composers. They came from across Europe to perform, to compose, and to escape wars and revolutions abroad. London’s blue plaques celebrate many of them. 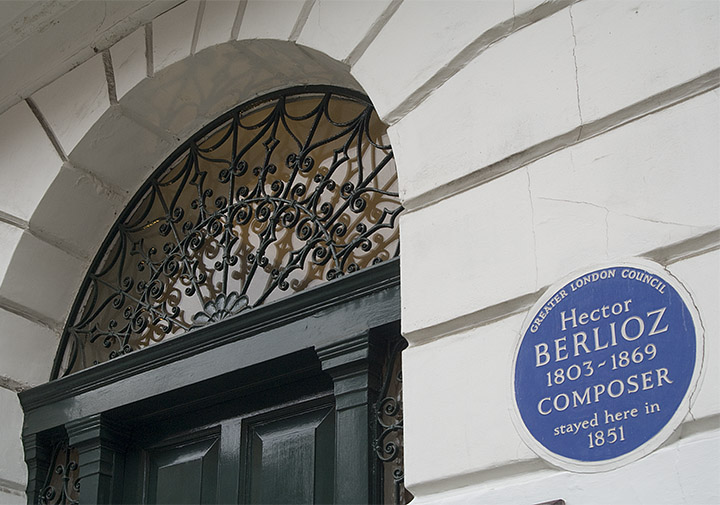 FROM OPERA TO ROCK

German-born George Frideric Handel (1685–1759) first came to London in the autumn of 1710, drawn by the popularity of opera in the city. Four years later, his patron – George, the Elector of Hanover – became King George I of England, a fortunate boost to Handel’s career. He was to live in London for the rest of his life.

In 1723 he moved to what is now 25 Brook Street, Mayfair, a terraced house that would then have been almost new. While living there he composed, among other pieces, ‘Zadok the Priest’ (1727) – a coronation anthem for George II – the Messiah (1742) and Music for the Royal Fireworks (1749).

Handel died at the house on the morning of Easter Saturday in 1759. A plaque first went up in 1870 and has twice been replaced, keeping alive the composer's association with the building and with London. The present one went up in 2001, when the house opened as a museum to Handel.

The Handel Museum now extends next door to number 23 – the home, in 1968–9, of the American-born guitarist and songwriter Jimi Hendrix (1942–70). With their plaques resting side by side, Handel and Hendrix form a famous juxtaposition of musical epochs.

A much shorter stay in London is marked by the plaque to Wolfgang Amadeus Mozart (1756–91) at 180 Ebury Street, Belgravia. Although Mozart only spent about a month in this house while his father Leopold recovered from illness in August and September of 1764, he was in London for over a year while on a grand tour of Europe.

The boy composer’s time in the capital was a formative experience. It was in Ebury Street (or Five Fields Row, as this semi-rural street was then called) where the eight-year-old prodigy composed his first symphony, K.16 in E flat major. It was also in London that he first met Johann Christian Bach (youngest son of Johann Sebastian), who was a great influence on Mozart’s work.

While Mozart came to London at the start of his career, the Polish composer Frédéric Chopin (1810–49) did so close to the end of his – in 1848, fleeing from revolutionary unrest in Paris, where he spent most of his life. Having lodged that summer in Dover Street, Mayfair, he stayed at 4 St James's Place, just north of St James’s Park, for little more than three weeks, arriving on 31 October.

It was from this house that Chopin left to play what turned out to be his final performance. That concert, on 16 November, was a benefit for the cause of Polish independence, held at the Guildhall. Not long afterwards he returned to Paris, and died of consumption the following year.

‘It is fearful! It is mad! I am giddy and confused. London is the grandest and most complicated monster on the face of the earth’, wrote Felix Mendelssohn (1809–47) on the first of his ten visits to the city, in 1829. Later he declared that there was ‘no question that that smoky nest is my preferred city and will remain so. I feel quite emotional when I think of it.’

Mendelssohn’s influence on British music – on improving the standard of performances, and on composers such as William Sterndale Bennett (1816–75) and the German-born Julius Benedict (1804–85) – is well established. Britain – or specifically, Scotland – was equally influential for Mendelssohn, as is apparent from the title of The Hebrides overture (1830), otherwise known as ‘Fingal’s Cave’. The lyricism of this piece is at odds with the composer’s actual experience, though: when he visited the cave, he was violently seasick.

On four – perhaps five – of his London visits, Mendelssohn stayed with his friend Carl Klingemann, a Hanoverian diplomat, at 4 Hobart Place, Belgravia. A plaque there was approved in 1909, but vetoed by the building’s owner. Mendelssohn eventually got his recognition in 2013, a mere 104 years later.

By strange coincidence, the day Mendelssohn died in November 1847 was also the first day spent in London by one of his greatest admirers – the French romantic composer Hector Berlioz (1803–59).

He visited the city five times, mostly to conduct, and his experiences were more mixed than Mendelssohn’s. In 1848 an opera promoter went bankrupt, so he never received his fee. In 1851, when Berlioz came to work as an adjudicator of musical instruments at the Great Exhibition in Hyde Park – a ‘stupid job’, in his opinion – he also never got paid.

On that trip, one recompense was that the Beethoven Quartet Society held recitals directly underneath where he was staying – at what is now 58 Queen Anne Street, Marylebone, the house that bears his plaque. Berlioz did not even need to leave his rooms to enjoy their performances: ‘I opened my door wide, Come in, Come in, welcome proud melody!’

Like Chopin, the French composer Charles Gounod (1818–93) – most famous for the opera Faust (1859) – came to London more or less as a refugee; in his case, it was from the Franco-Prussian war, in 1870.  He spent just five weeks at 15 Morden Road in Charlton, where his plaque can be found, but was based in London for about four years, living mostly with the singer Georgina Weldon in Tavistock Square.

Their relationship was the subject of much snide speculation. After Gounod went back to his wife in Paris, Weldon refused to send on his belongings – and when she relented, wrote her name in crayon on every page of one of his manuscript scores. She went on to sue him, unsuccessfully, for £10,000.

A Taste of Scandinavia

Edvard Grieg (1843–1907) avoided such difficulties when visiting London, and would often perform with his wife, the singer Nina Hagerup. On four visits from their native Norway between 1888 and 1897 they stayed with Greig’s publisher, George Auguner, at 47 Clapham Common North Side, a flat in one of two large, matching French Renaissance-style blocks facing the Common. Apparently Grieg got a kick out of travelling up to town from Clapham by tram, meticulously noting down the fare in his pocket book.

Another visitor from the north was the Finnish composer Jean Sibelius (1865–1957), who paid five visits to London – the longest of which, in the early months of 1909, saw him compose the string quartet Voces Intimae. This was at 15 Gloucester Walk, Kensington, where a plaque went up in 1995, the first to honour a Finnish national.

A Symphony of  Noise

Béla Bartók (1881–1945) is widely acknowledged as the greatest Hungarian composer, though the shifting boundaries of central Europe mean that his birthplace is now in Romania. In London, he stayed at least a dozen times between 1922 and 1937 at 7 Sydney Place, South Kensington – the home of his friend Sir Duncan Wilson, a leading civil servant.

Bartók’s trips were all undertaken to perform, part of the attraction being that he could earn more in London than in Hungary. Such economic considerations undoubtedly drew other composers too, helped by the Londoners appetite for new musical experiences.

But the pull of England and its capital is perhaps best summed up by the ever-quotable conductor Sir Thomas Beecham (1879–1961): ‘The English may not like music, but they absolutely love the noise that it makes.’