Discover which past Olympians and remarkable sporting feats have been celebrated by the London blue plaques scheme and where to find their plaques. 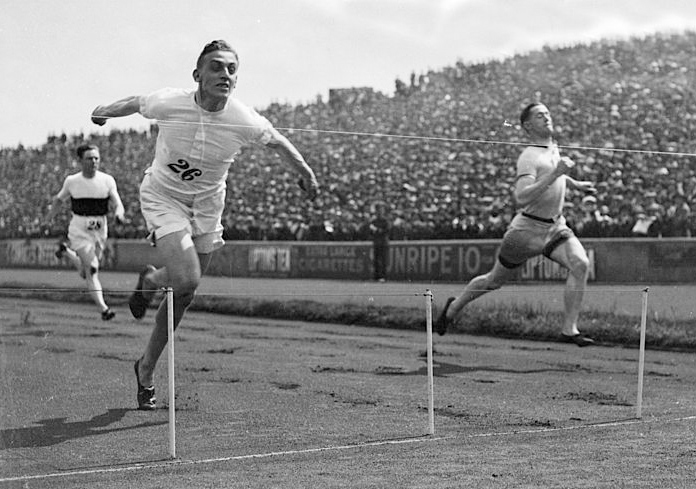 Thanks to the film Chariots of Fire (1981), the Olympic exploits of the athlete Harold Abrahams (1899–1978) (above, crossing the finishing line) are well known. He took the gold medal for the 100 metres at the Paris games in 1924, becoming the first European to win an Olympic sprint title.

Abrahams also held the English long jump record for some 30 years, and went on to become a successful barrister, journalist and athletics administrator. His English Heritage plaque is at 2 Hodford Road, Golders Green, on the house in which he was living with his mother, Esther, at the time of his Olympic triumph.

Abrahams was coached to his 1924 gold medal by Scipio Africanus ‘Sam’ Mussabini (1867–1927), who was himself awarded a blue plaque in July 2012, just before the London Olympics. Using cameras to analyse running techniques and developing a pioneering running action called the ‘poly’ swing, the Blackheath-born athletics coach saw his protégés win a total of eleven Olympic medals over five games.

Mussabini is commemorated at his former home at 84 Burbage Road, which, appropriately, lies within sight of the athletics stadium at Herne Hill where he coached Abrahams and other Olympic medallists including Reggie Walker, Willie Applegarth and Albert Hill. Hill won gold medals in both the 800 and 1,500 metres at the 1920 Antwerp games.

The man who crossed the line second to Albert Hill in the 1,500 metres at Antwerp was Philip Noel-Baker (1889–1982). In addition to his silver medal, Noel-Baker was a finalist at the 1912 Olympics and captained the British Olympic team at the 1920 Games.

But, like Abrahams, he was an athlete with more than one string to his bow. Noel-Baker went on to serve as Secretary of State for Commonwealth Relations in the post-war Labour government and to win the Nobel Peace Prize in 1959 for his efforts to promote disarmament. He was a strong advocate of sport as an aid to international understanding.

Rowing first featured in the Olympics in 1900, and Jack Beresford (1899–1977) was the first rower to win medals at five games in a row. He was successful in eights, fours, pairs and sculls, winning two Olympic silver medals and three golds between 1920 and 1936.

He led the British team at the notorious Berlin Games of 1936 and, with his colleague Dick Southwood, beat the German favourites for gold in the double sculls event – in front of a watching Adolf Hitler.

Beresford was also a successful coach and sports administrator, and helped to organise the 1948 Olympic Games in London and Henley. ‘The Old Fox’, as the Germans called him, is commemorated at 19 Grove Park Gardens in Thames-side Chiswick – his home from 1903 until his marriage in 1940.

Lambert Chambers also took seven Wimbledon singles titles between 1903 and 1914, which remains a record for a Briton. To this, she added five doubles triumphs, as well as playing competitive badminton and hockey. Born Dorothea Douglass, she was raised at 7 North Common Road, the vicarage of St Matthew’s, Ealing Common, and lived there until her marriage in 1907. The house was marked with an English Heritage plaque in 2005.

The following year, English Heritage honoured the finest British woman tennis player of the interwar years – Kathleen (‘Kitty’) Godfree (1896–1992) – with a plaque at 55 York Avenue, East Sheen, her home between 1936 and 1992. She ties with Venus Williams for the most number of Olympic medals won at tennis – Godfree won five in total, including gold in the women’s doubles at the Antwerp Games of 1920.

Making her Wimbledon début in 1919, Godfree went on to win both the singles and the mixed doubles at the championships of 1924 and 1926. She shared her 1926 doubles triumph with her husband, Leslie (1885–1971), and they remain the only married couple to have won the title. Godfree was also four times All England Badminton Champion between 1920 and 1924, and an accomplished skater, golfer and cricketer.

One of Britain’s finest tennis players, Fred Perry (1909–95), was denied the chance to add a gold medal to his Wimbledon trophies when tennis was withdrawn from the Olympic Games in 1928, and not reinstated for another 60 years. At the London 2012 games, therefore, Andy Murray became the first British man to win the Olympic singles gold medal in tennis since Josiah Ritchie in 1908.

English Heritage took on the London-wide plaques scheme in 1986, since when the number of sporting plaques has risen sharply. Thanks to some inspired public suggestions, and also to work with Sport England and other bodies, a number of sporting champions have been honoured with one of the famous blue roundels. Nonetheless, sport remains an under-represented area, and more nominations are welcomed.