In the 400 years since William Shakespeare died his plays have been continually reborn on the British stage. In London the Bard’s legacy can be traced through the blue plaques to the playwrights, actors and theatre managers he inspired. Join us on a journey through four centuries of Shakespearean performance. 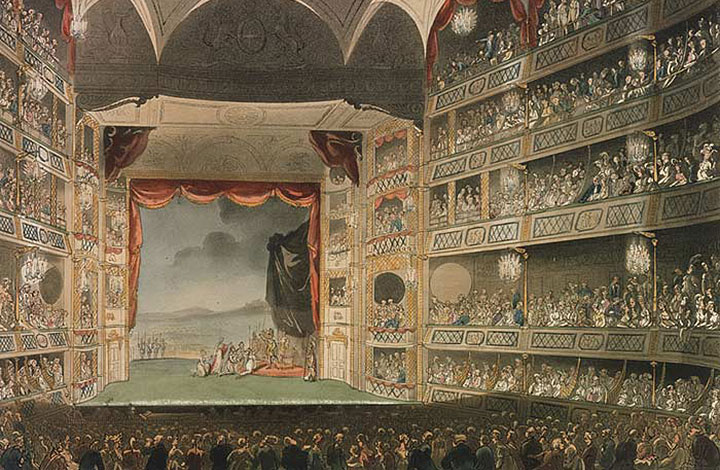 At Christmas time in 1598 a group of men armed with ‘many unlawful and offensive weapons, as namely swords, daggers, bills, axes and such like’ pulled down The Theatre, London’s first purpose-built playhouse. Built in Shoreditch in 1576, the theatre had been allocated to the acting company The Lord Chamberlain’s Men in 1594. Their resident playwright was William Shakespeare.

The armed men didn’t destroy The Theatre, but reinvented it. They transported its splintered remains across the river from Shoreditch to Southwark and used the timber to build a new stage: the Globe Theatre.

Those original timbers and Shakespeare’s London addresses have long since been lost, but the Bard’s presence is never far from the capital’s streets.

Shakespeare’s plays weren’t immediately popular in the decades following his death in 1616. Samuel Pepys, writing in 1662, called A Midsummer Night's Dream ‘the most insipid ridiculous play that ever I saw in my life’, though he admitted it was redeemed by ‘some good dancing and some handsome women’.

Restoration dramatists turned increasingly to spectacular scenery, costumes and individual performances to make Shakespeare more popular for their age. They also started taking liberties with his works. In 1667 John Dryden collaborated with Sir William Davenant on a production of The Enchanted Island, their own take on The Tempest. In their version, Ariel gets a girlfriend, Prospero a second daughter and Caliban a sister. After seeing this performance, Pepys declared him and his family ‘mightily pleased with the play’.

It was the start of a long history of adaptation in Shakespearean theatre. As with Nahum Tate’s famous rewrite of King Lear – the original described by Tate as ‘a Heap of Jewels, unstrung and unpolisht’ – the genuine Shakespeare text for The Tempest wasn’t performed again until well into the 19th century.

Despite being unfaithful to Shakespeare’s plays, Dryden was one of the first writers and critics to glorify him. Shakespeare was, he said, ‘the man who of all Modern, and perhaps Ancient Poets, had the largest and most comprehensive soul’.

By 1740, almost a quarter of all performances in London theatres were Shakespearean productions. There were several new editions of his works, including one in 1765 by Dr Samuel Johnson, who declared that Shakespeare ‘may now begin to assume the dignity of an ancient’. However it wasn’t Johnson but his former pupil, the actor David Garrick, who did the most to elevate Shakespeare to the status of semi-divine idol.

‘The God of my idolatry’

Garrick’s stage début as Richard III in 1741 was the start of an acting revolution, particularly in Shakespearean performance. Audiences flocked to see this dynamic young star who, instead of giving a controlled delivery of the script, dared to express the full scope of human emotions in his performance. ‘Shakespeare revives!’ a pamphlet of 1752 announced. ‘In Garrick breathes again!’

Borrowing from Romeo and Juliet, Garrick called Shakespeare ‘the god of my idolatry’ and built a ‘grateful temple to Shakespeare’ in the gardens of his villa in Richmond-upon-Thames. As actor-manager of Drury Lane theatre in Covent Garden, Garrick put the Bard at the centre of the programme and called the theatre the ‘house of William of Shakespeare’. He restored much of the original text to King Lear and the title role became known as one of his greatest tragic performances. His very last appearance as Lear in 1776 was so moving it took Sir Joshua Reynolds three days to recover from it.

But it may have been Garrick’s 1769 Stratford jubilee which finally established Shakespeare as a national icon. The event itself took place over three days in Stratford-upon-Avon while the crowning showpiece – a grand procession of Shakespearean characters – went on to be performed 91 times in one season at Drury Lane.

Drury Lane’s next manager – the Irish playwright Richard Brinsley Sheridan – wasn’t as faithful to the legacy of Shakespeare as Garrick. In 1796 he staged a performance of Vortigern, a ‘Shakespearean’ play he had bought from William Henry Ireland, who claimed to have discovered it along with two other of the Bard’s long-lost manuscripts. The two preeminent stage actors at the time, John Philip Kemble and his sister Sarah Siddons (who was the first woman to receive an official commemorative plaque, though it was later lost to demolition) reluctantly performed the lead roles to the derisory laughter of the audience. It came as no surprise when in the same year the scholar Edmond Malone exposed the manuscripts as forgeries – all part of Ireland’s elaborate and fraudulent hoax.

In following years, theatre managers took their Shakespeare more seriously. In the 19th century, performances became increasingly obsessed with historical accuracy and actor-managers such as William Macready and Samuel Phelps restored more and more of the original Shakespeare texts. Phelps, who had been forced for many years to play the Ghost to his competitor’s Hamlets (Charles Dickens was once called in to play referee after one such unfair distribution of roles) came into his own as manager of Sadler’s Wells in Islington.

At the time Sadler’s Wells was in a low to lower-middle class neighbourhood where high-minded drama wasn’t on the agenda. But Phelps believed that every area in London deserved ‘its own well-conducted theatre within a reasonable distance of the homes of its patrons’. And so during his 18-year stewardship from 1844 to 1862, he staged over 1,600 Shakespeare performances, including original-text versions of Richard III and King Lear and a Macbeth without the singing and dancing witches that had become standard in the previous century. He even produced the first performance of Pericles in 200 years and only the second production of Love’s Labour Lost since the Renaissance.

The next generation of actor-managers – namely Henry Irving and Herbert Beerbohm Tree – continued with the project of accurate, authentic Shakespeare productions.  George Bernard Shaw – who was competing both for the theatrical limelight and Irving’s rumoured mistress and acting partner, Ellen Terry – criticised Irving for neglecting the new style set by contemporary playwrights such as Henrik Ibsen. But Irving was more visionary in other ways: he was one the first actors to portray Shylock in The Merchant of Venice as a sympathetic character.

Informed by anti-Semitic sentiment, theatre directors had traditionally cast the Jewish merchant as a villain. But Irving perceived Shylock as ‘almost the only gentleman in the play, and the most ill-used’. The play demonstrated, he thought, that ‘the worst passions of human nature are nurtured by undeserved persecution’. To stress this tragic interpretation, he introduced a new scene in 1879 to portray Shylock as a victim and left out some of most anti-Semitic lines.

However attitudes towards race were slow to change in Shakespearean theatre. The first black actor to appear in a major production in London was Ira Aldridge in 1833. Born in New York into a racially segregated society, Aldridge travelled to London in 1824 in the hope of finding more acting opportunities. His big break came when Edmund Kean fell ill while playing Othello at Covent Garden Theatre in 1833. Aldridge stepped in to play the title role but, despite being well-received by the audience, the production was shut down after only two performances.

A century later, it was still a newsworthy event for black actor to play a leading role in the West End. In 1930 the African–American performer Paul Robeson played Othello opposite Peggy Ashcroft at the Savoy Theatre. He believed Britain to be more tolerant than his home country but his experience of the Savoy Hotel’s ‘colour bar’ demonstrated there was still a long way to go. He used his position as a famous singer and actor to make a clear political stand, telling a London audience in 1937: ‘The artist must take sides. He must elect to fight for freedom or for slavery. I have made my choice.’

The Savoy Theatre production of Othello moved to Broadway in 1943, where it became the longest running Shakespearean production of all time. Throughout his New York performances in 1943–4, Robeson refused to perform in front of segregated audiences.

London’s appetite for Shakespearean theatre was reawakened in the first quarter of the 20th century by Lilian Baylis. In 1912 she took over the Victoria Theatre – known to most as The Old Vic – from her aunt, Emma Cons, who had been running it as a temperance hall. Baylis immediately gained a theatre licence and in 1914 formed The Old Vic Shakespeare Company with Ben Greet.

Over the next seven years, Baylis became the first in history to stage a complete cycle of the First Folio. Her commitment to Shakespeare through the zeppelin raids of the First World War was legendary. ‘What’s an air raid when my curtain’s up!’ she once exclaimed.

She and Greet nurtured a new generation of Shakespearean stars: Sybil Thorndike, Edith Evans, John Gielgud, Peggy Ashcroft, Michael Redgrave, Alec Guinness and Laurence Olivier. On the day that Baylis died – 25th November 1937 – Laurence Olivier narrowly escaped death himself when a stage weight crashed onto the set during a dress rehearsal of Macbeth. The opening of the play was delayed due to a car accident involving the director and lead actress and, in sympathy, Baylis’s portrait came loose and clattered to the floor.

It was the end of an era at the Old Vic, but Shakespeare continues to take centre stage in London. From the capital’s theatres to the buildings associated with the generations of playwrights and performers he inspired, his legacy has shaped the very fabric of the city.