At the top of Deal Castle, inaccessible to modern visitors, is a hidden secret. Since at least 1724, people have left graffiti on the castle’s roof. Hundreds of images have been carved into the soft lead, giving us a tantalising glimpse of life at Deal over the centuries.

From a mysterious 18th-century woman known as Teetsy to three soldiers stationed at Deal during the Second World War, this gallery showcases just a few of the most remarkable examples of Deal’s rooftop graffiti.

This simple drawing shows a man wearing a coat with a high collar, and possessed of a rather large nose. Could it be a caricature of the Duke of Wellington, nicknamed ‘Old Nosey’ by his soldiers, who was Lord Warden of the Cinque Ports at nearby Walmer Castle, from 1829 until 1852? If not, it certainly seems to be poking fun at someone, perhaps a military or naval officer. 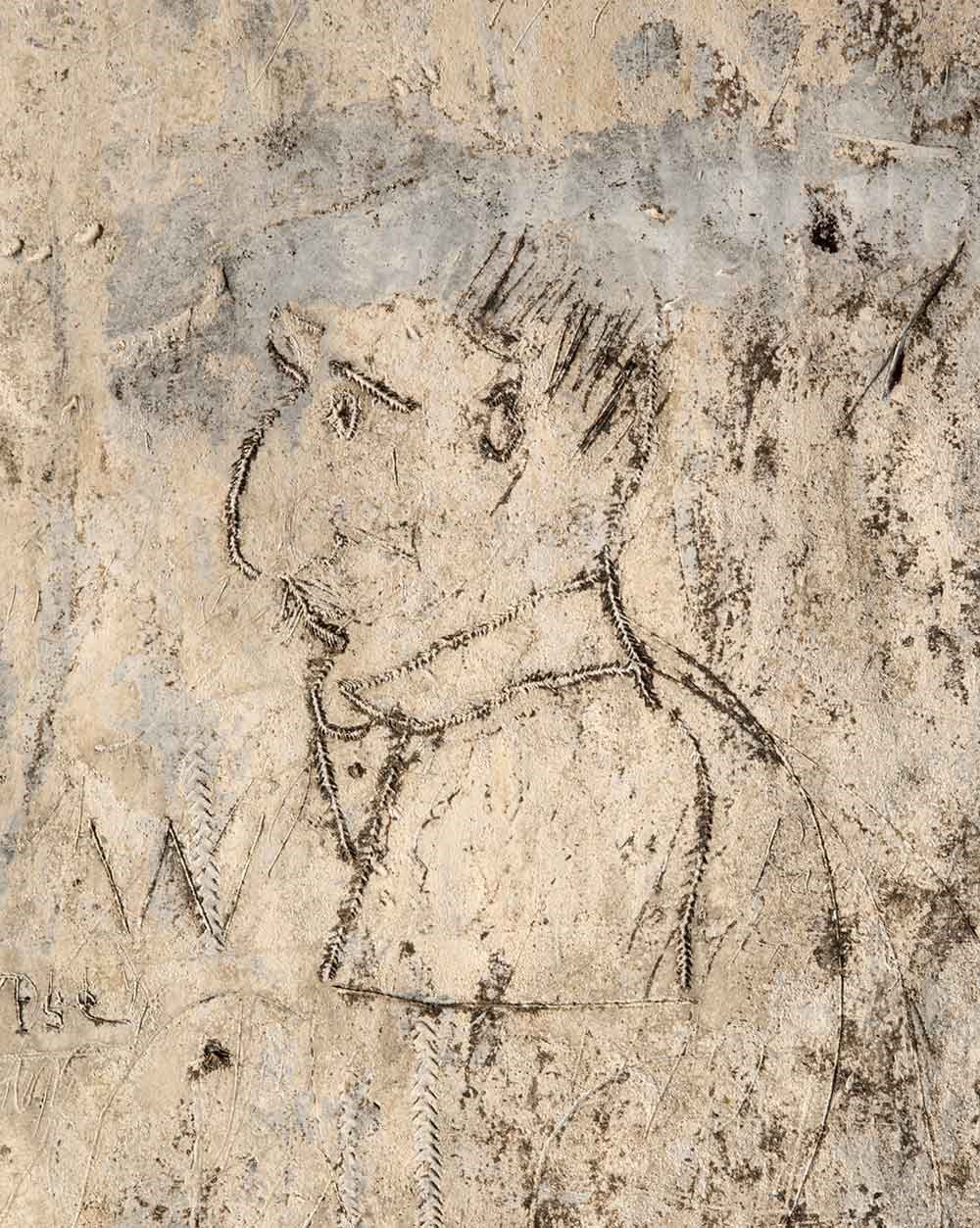 Many people have left their names and a date, like this one. ‘W Woodcock 1866’ was probably William Woodcock who was a blacksmith working in Deal in the 1860s and 70s. It is likely that he was at the castle doing some repairs. 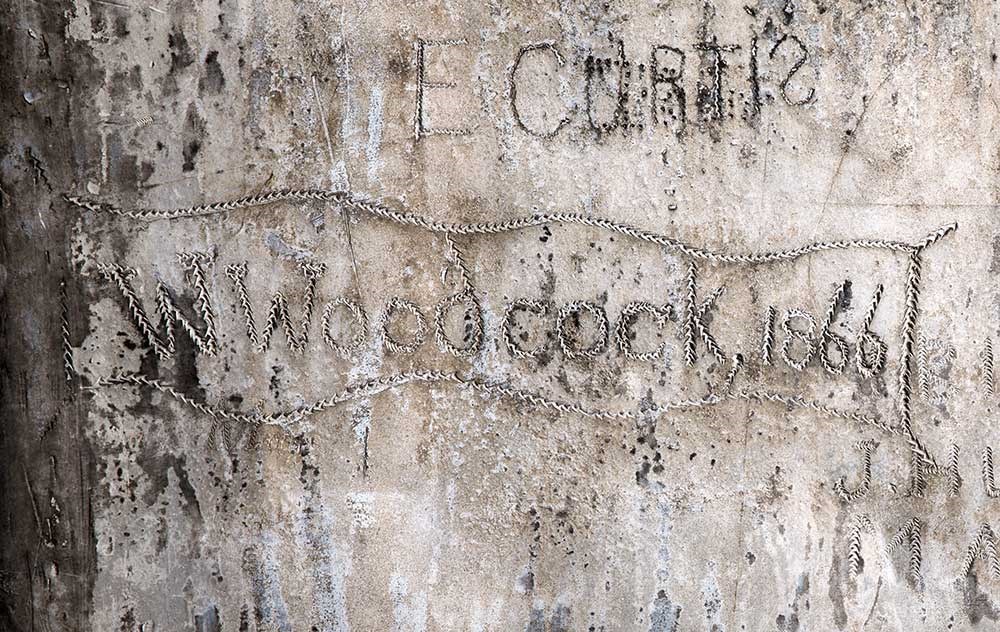 William was born in Deal in 1793 and is listed as a plumber and maker of hop sacks in a Post Office directory in 1855. As a young man of about 18 he was probably employed to carry out repairs to windows or leadwork on the roof, and left his name in this devil-like cartouche. 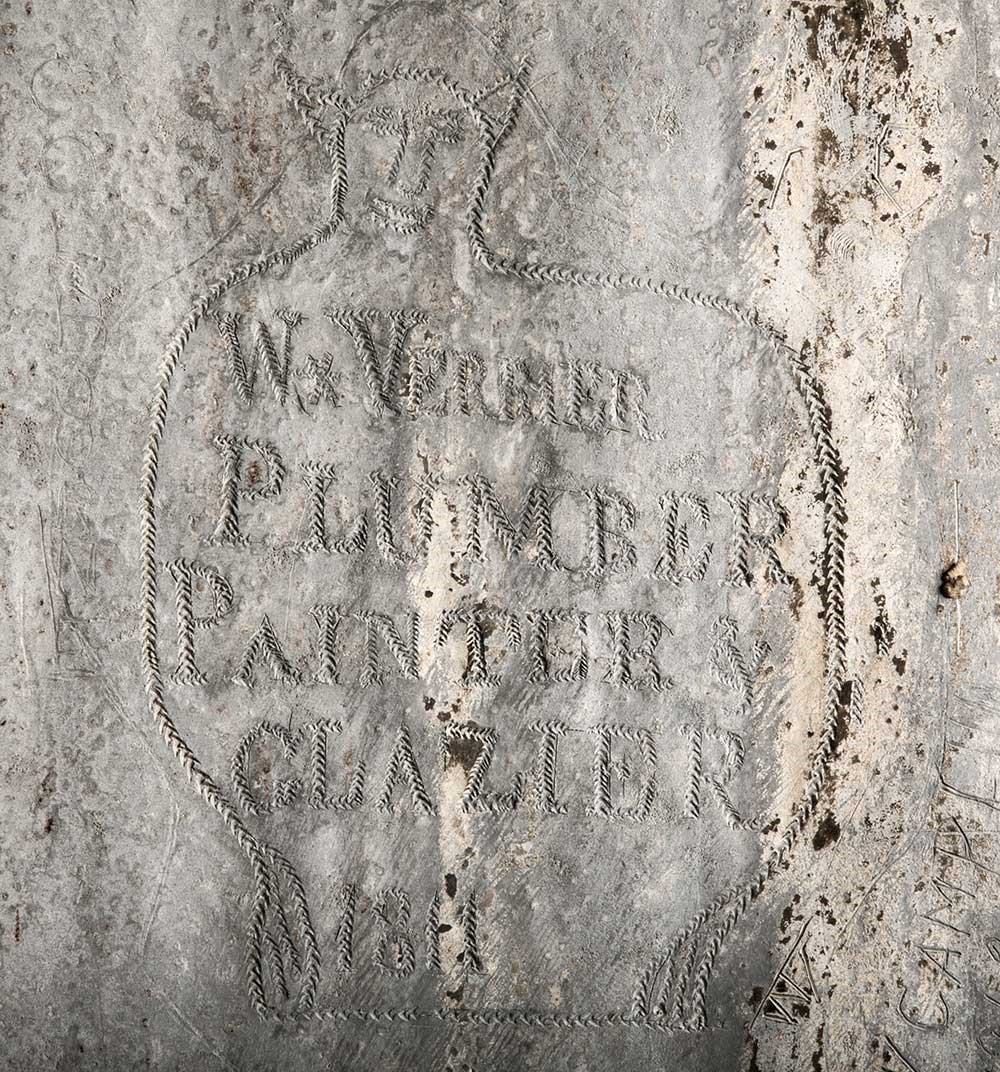 God Save the Queen

God Save the Queen

This elaborate graffito includes the date 1840 and ‘GOD SAVE THE QUEEN’. It probably celebrates the wedding of Queen Victoria to Prince Albert in that year. 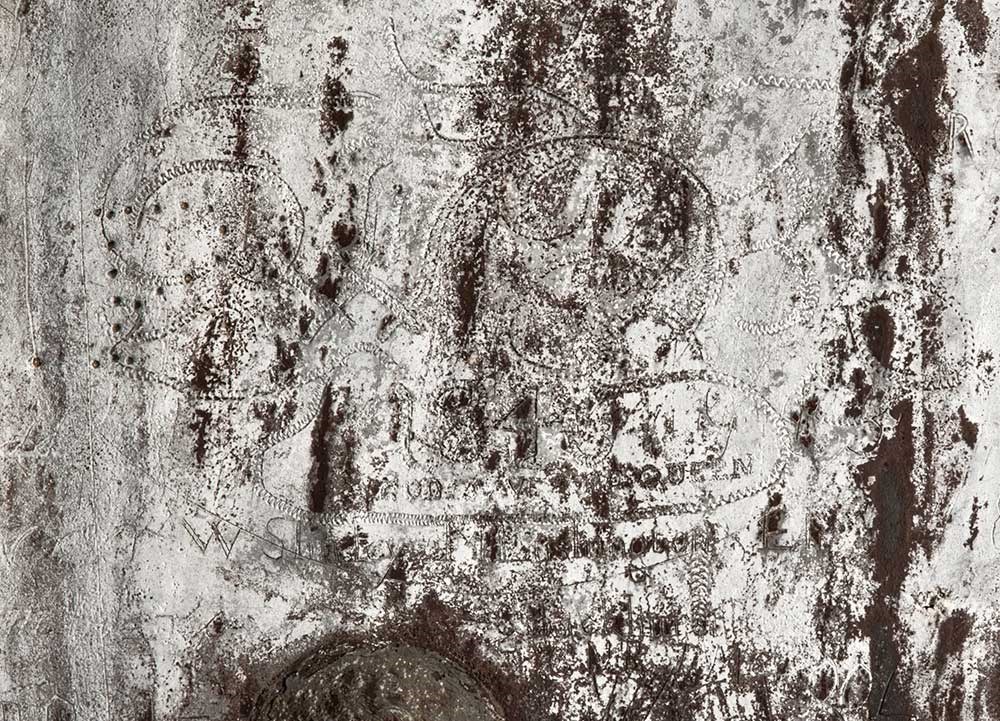 This is a strange example, comprising two different scripts. The first part reads ‘Michael Brown a native of Armitage in the County’. The second part looks to be a later addition and reads ‘Hung at CANTERBURY’. Was Michael Brown executed or are the two graffiti unrelated? 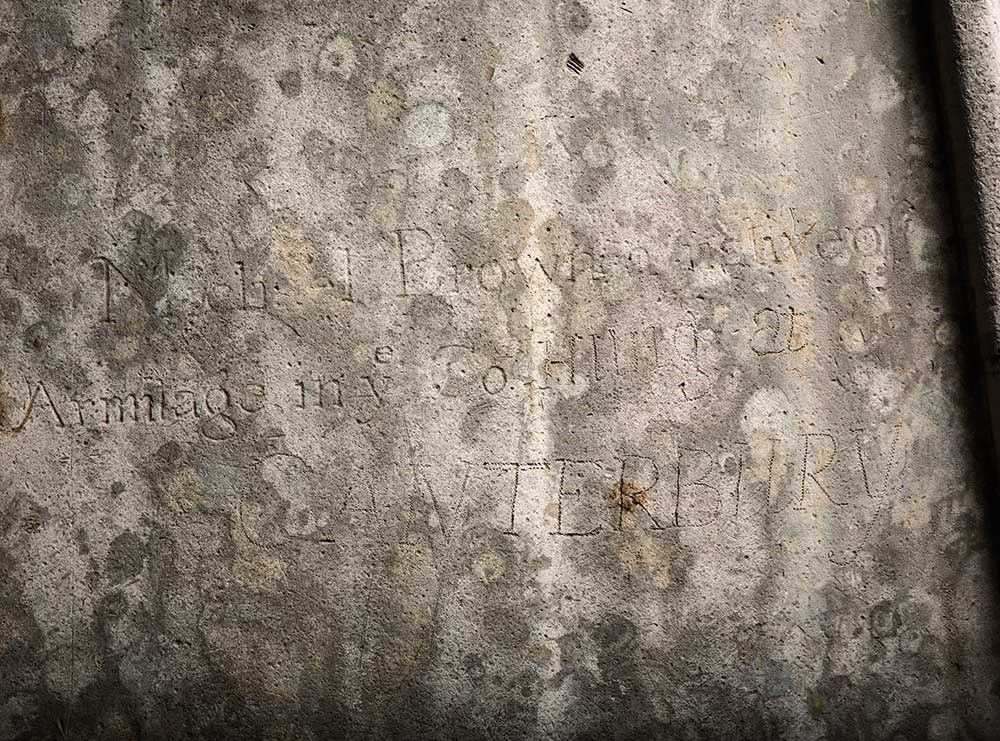 Here are three simple drawings of houses with steep roofs, each flying a flag, with the date 1729 and initials JH, AB and WP. The flags are ensigns of the Union Jack and probably express pride in the union of England and Scotland, which had taken place in 1707. In 1729 workmen began to build the new Captain’s House at Deal. Are these little drawings their work too? 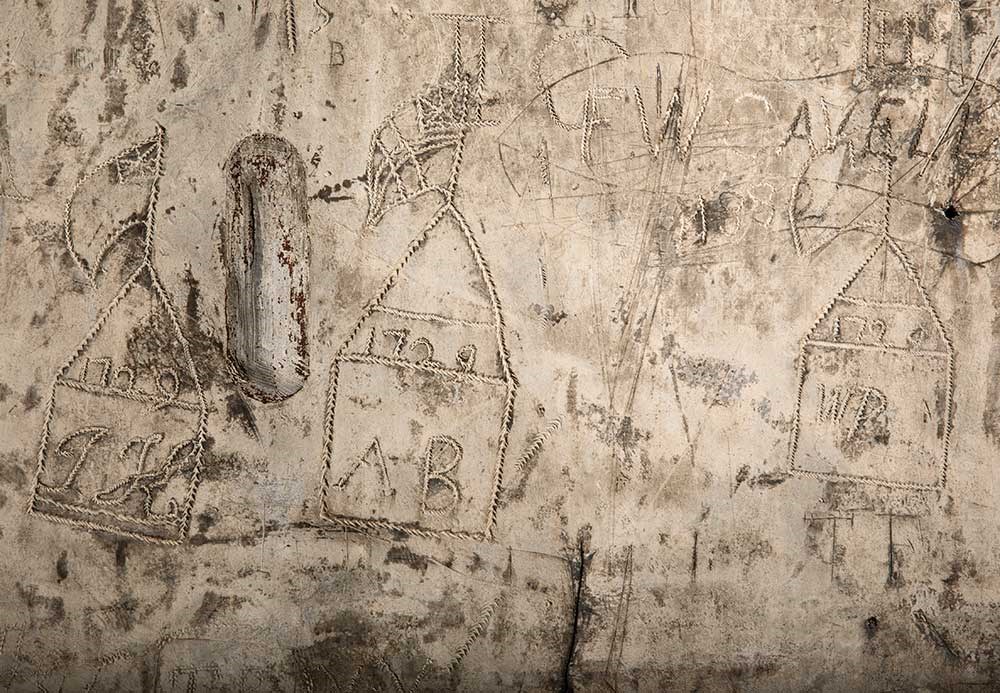 Three graffiti, of different dates. One shows a plant in a pot. The second is another stylised house with a flag, containing the initial I R and the date 1726 – one of the earliest we have discovered. Another, cruder house, contains ‘1760 May’ and ‘Mary Child’. 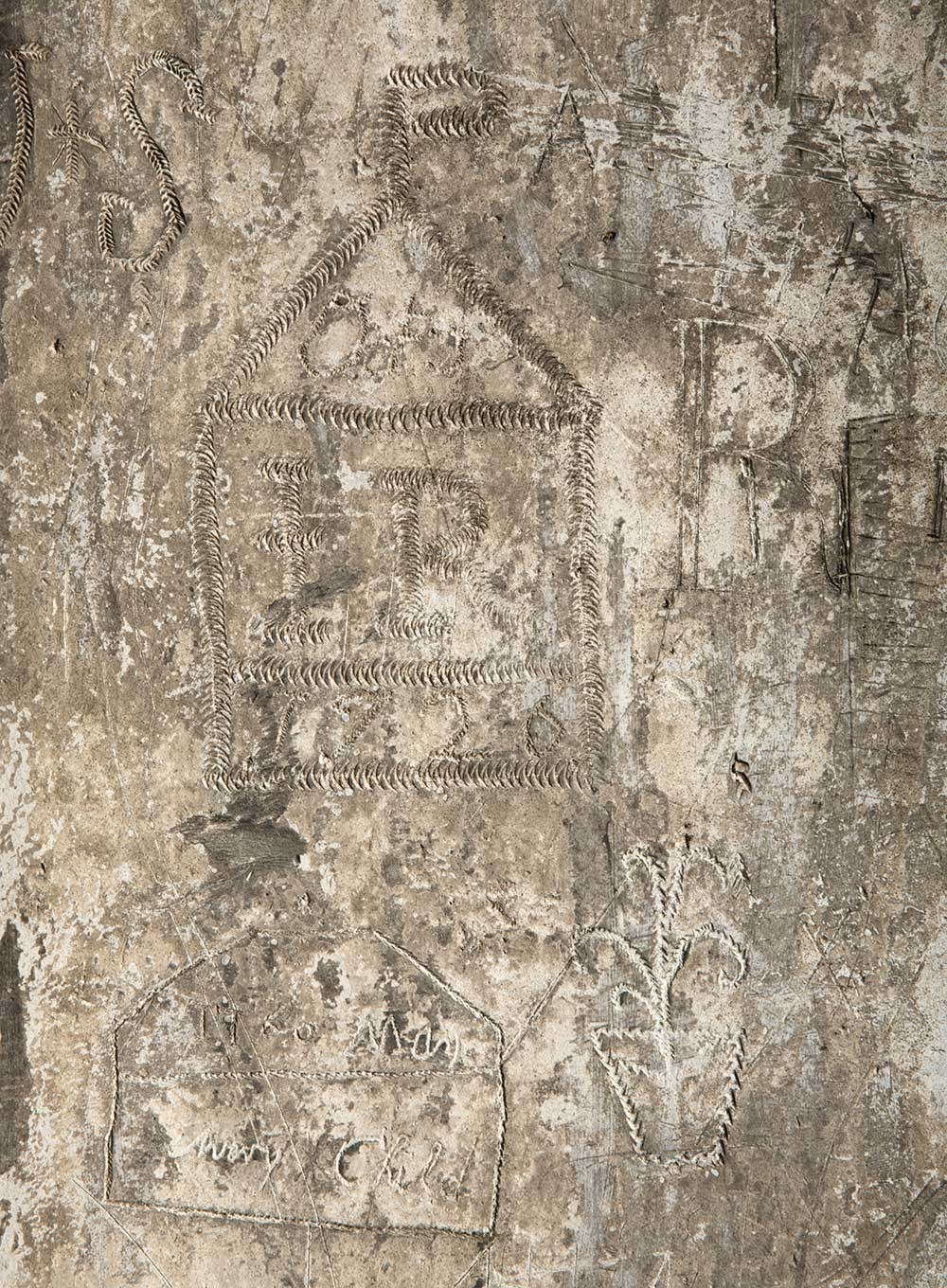 A hand and foot, probably drawn around, and belonging to ‘WB’. Leaving a mark in this way was popular, following a wider local tradition. There were similar graffiti in the lead on the roof of Dover Castle in 1664 ‘scratched in the foot prints of some people inscribed with their names, amongst them those of King Charles II’. 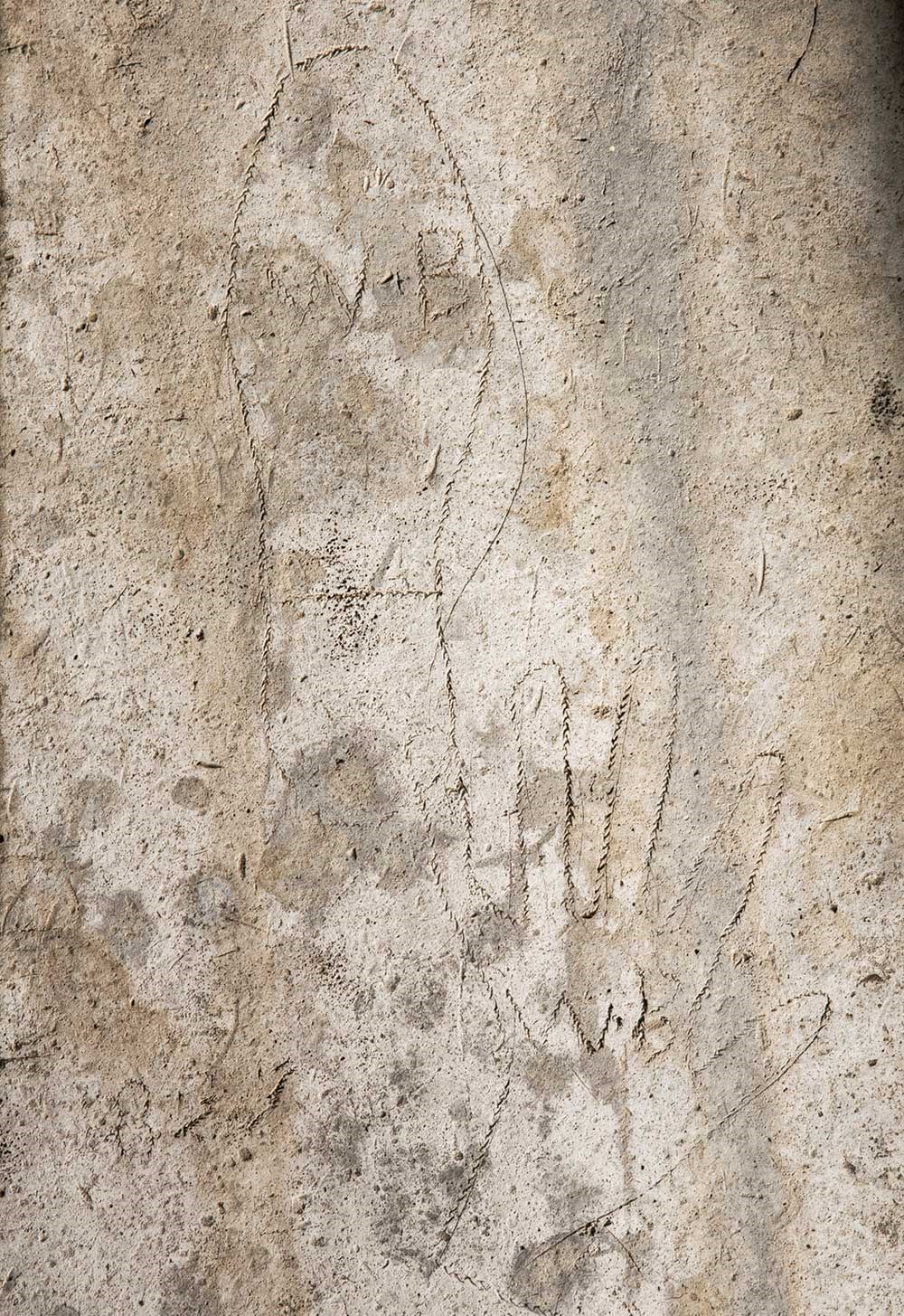 These two graffiti, side by side, were created 62 years apart. Who was ‘Charming Miss Teetsy’? Was she perhaps the object of desire of one of the workmen who began building the Captain's House? The date ‘19 May 1729’ fits. Next to her is ‘M Kim, American, 1791’. Though we don’t know of this person, the date is only eight years after American independence. Is this an early example of American pride? 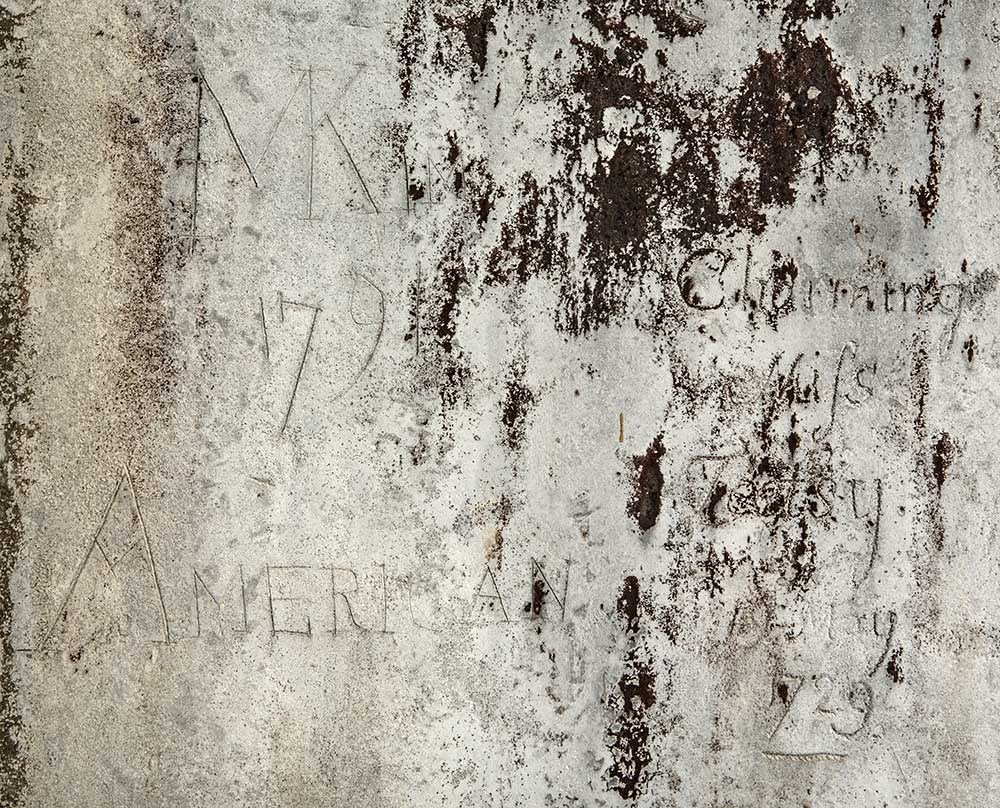 Unsurprisingly for a maritime town such as Deal, there are a few graffiti of ships inscribed into the lead of the roof. This one shows a small sailing ship with three sails carried on a main mast and a large bowsprit. Perhaps this is a fast cutter, which would have been familiar sight in the Downs off the coast of Deal. 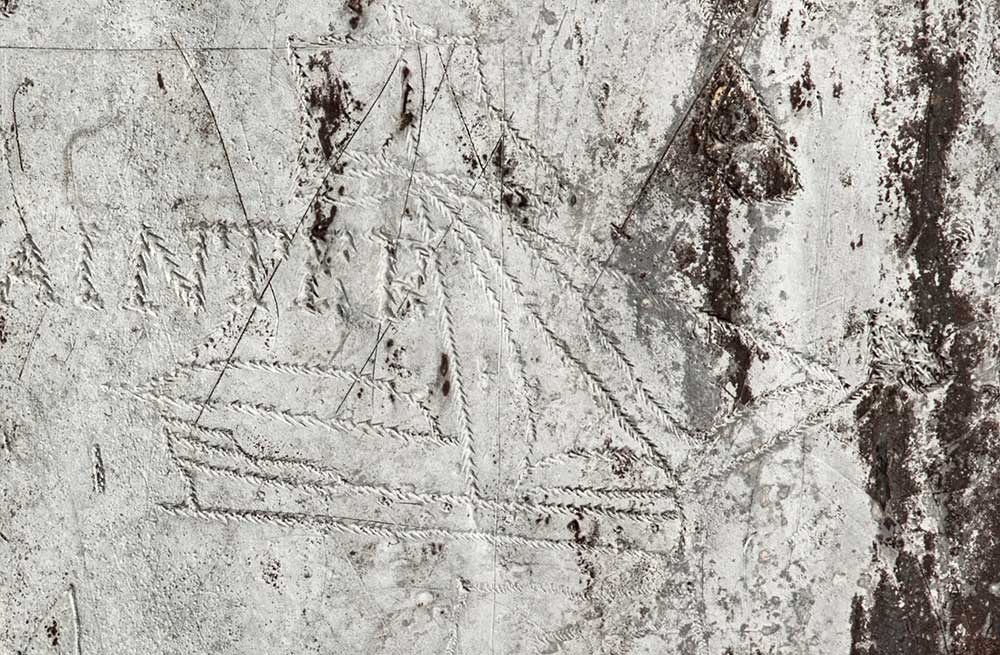 This faint but carefully inscribed graffito depicts the sun, complete with a human face. It is cut off at the top and is therefore probably a reused lead sheet. The rays of the sun are developed into the cardinal points – north, north-east, east, south-east etc – suggesting that it might originally have been inscribed true to the compass. 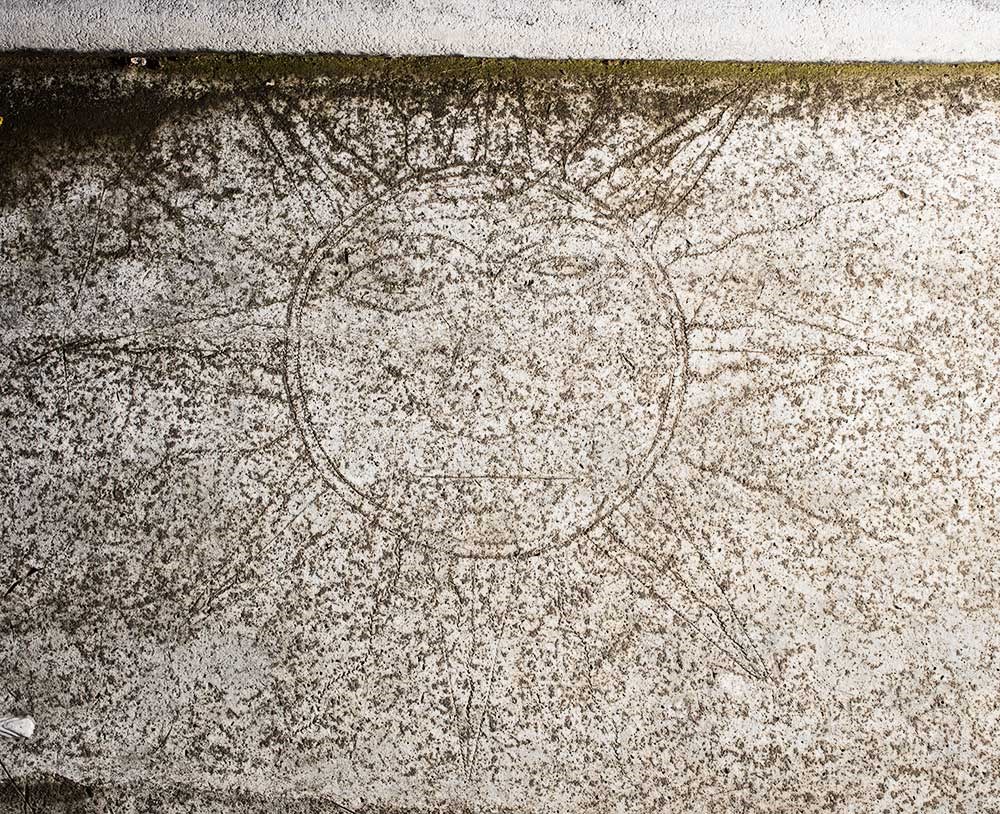 Some graffiti are cut into stone, with a large group in the parapets of the inner bastions on the north side of the castle. All are like this one, with initials and a date, which is always 1732. The date is significant, recording the completion of building the Captain’s House, so it is likely the initials are those of craftsmen who worked on it. 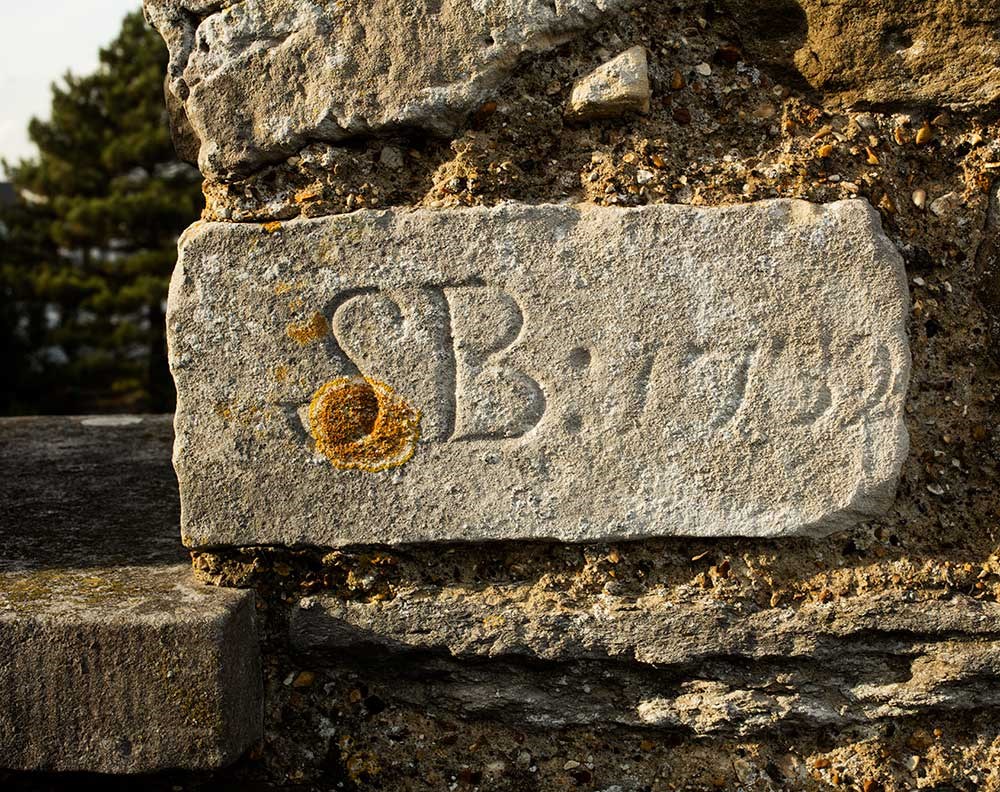 The names of three men, contained in rectangular frames, are crudely scratched one above another. They are ‘GNR ELLAWAY RA JUNE 1940’, ‘GNR WILCOX AUG 1940’ and ‘GNR HILSDON RA AUG 1940’. All were gunners (GNR) of the Royal Artillery (RA) stationed at Deal Castle during the Second World War, manning two large coast-defence guns on the promenade. 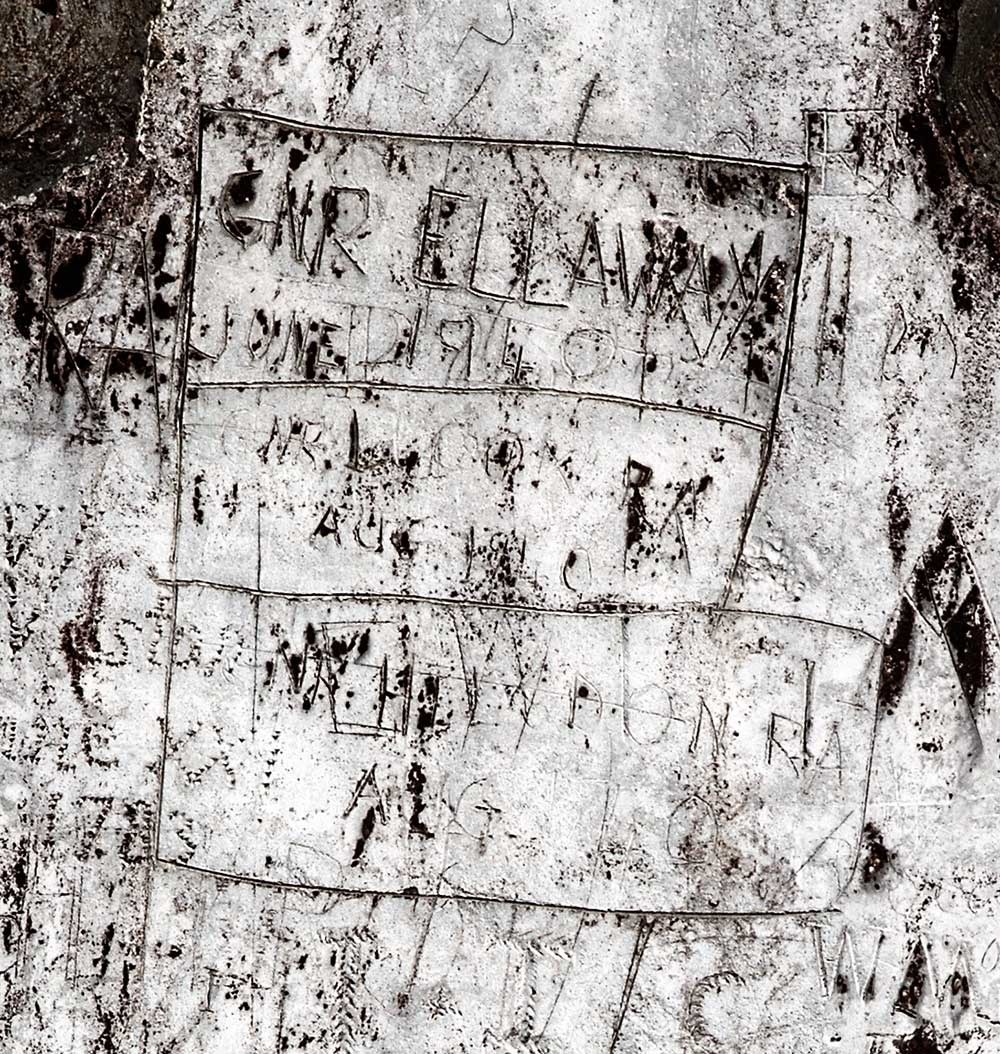