When war was declared on 4 August 1914, Dover assumed a vital role in the defence of Britain. The huge Admiralty Harbour supported naval forces controlling the Straits of Dover and safeguarded troops and supplies going to and returning from France. The town itself became one huge fortress, with a garrison to hold the port at all costs.

Among Dover’s defences, an obsolete gun battery within the castle was transformed into a command and control centre that played a vital part in safeguarding Dover as a garrison and naval base. You can explore this building using the virtual tour below, and find out more about Dover’s role in the First World War.

The Fire Command Post and Port War Signal Station building in the foreground, with Dover town and harbour below

The building began life in 1874 as a gun battery to defend Dover from attack by enemy ships. But by 1890 its guns had become obsolete, and from 1891 its structure was adapted, so that by the First World War it had two key roles.

On the lower floor it served as a Fire Command Post, controlling the coastal artillery around the harbour that protected Dover and the Straits of Dover. The floor on top of this, which was added in 1914, operated as a Port War Signal Station. From here the Navy controlled the movements of all ships in and out of the harbour, communicating with ships and other signal station using flags and wireless, and providing early warning of attack by enemy ships and aircraft.

These two installations played notable roles in both world wars.

Use this virtual tour to explore the Fire Command Post and Port War Signal Station and to find out more how the building operated in wartime. With the control panel (bottom right) you can toggle information on and off and view the tour full screen.

Please note that the tour works best on desktops and tablets. 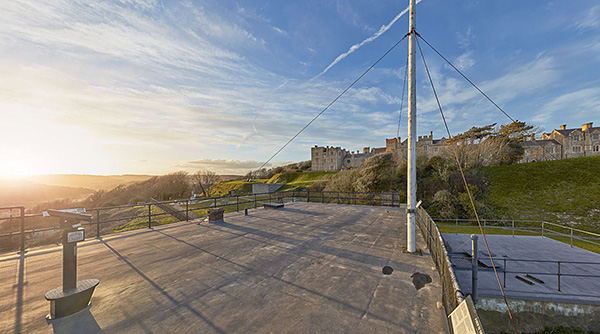 Between 2014 and 2018, marking the centenary of the First World War, English Heritage, together with the Heritage Lottery Fund and The Friends of Dover Castle, embarked on a project to commemorate the story of Fortress Dover. Thanks to a grant of £272,600 from the Heritage Lottery Fund, the building housing the Fire Command Post and Port War Signal Station was painstakingly conserved and re-presented.

As a result of this project, it is now possible to experience what it might have been like to live and work in the building via a range of replica and original artefacts. The grant also made it possible to restore and conserve a British 3-inch gun, the only working example of just six left in the world. There are now regular gun-firing demonstrations each summer.

Working with our community

A key focus for the Fortress Dover project was engagement with the local community. Support from the Heritage Lottery Fund enabled us to involve local people in community events to raise awareness around Dover’s role in the First World War. These ranged from local education projects and children’s theatrical performances to film screenings and open evenings. An enduring legacy of the project is the involvement of local people in volunteering roles at Dover Castle. People from all walks of life have come together to explore their passion for history and help interpret Dover’s fascinating past for visitors.

The culmination of the project was a day of commemorative activity held on 11 November  2018, the centenary of the armistice that ended the First World War. Volunteers from the Fortress Dover project joined veterans from the Royal Artillery Association in a service of remembrance at 11 o’clock, firing shots to mark the start and finish of the traditional two-minute silence. Members of the local community joined together at the castle to take part in commemorations throughout the day and after dark. In a fitting tribute to end the activities, the castle’s beacon joined thousands of others lit across the country to symbolise an end to the darkness of war and a return to the light of peace.

English Heritage would like to thank the National Lottery Heritage Fund and the Friends of Dover Castle for their support.