Walmer Castle was built during the reign of Henry VIII as a response to the perceived threat of invasion from Europe. While no such invasion ever came, the castle did later see action when it was besieged by Parliamentarian forces during the English Civil Wars.

Over the centuries, the castle’s military use slowly declined, and it was gradually transformed into the official residence of the Lord Warden of the Cinque Ports.

Early in 1539, Pope Paul III arranged a treaty between Francis I, king of France, and Charles V, the Holy Roman Emperor, ending years of hostility and fighting. He urged them to invade England with their formidable armies to punish Henry VIII. The English king had outraged the pope and many leaders in Europe over his divorce from Katherine of Aragon, his taking over control of the Church in England, and his destruction of the monasteries, taking their lands and revenues.

Henry’s response to this threat was swift, with nationwide preparations for war. At Walmer, he ordered the building of an artillery castle, one of many along the English coast, equipped with big guns to sink enemy warships and to fire on troops attempting to land on the beaches nearby. Completed in 1540, Walmer Castle formed part of a defensive barrier 2.7 miles long, from Walmer to Deal and Sandown, where Henry had similar castles built. Between the three castles were four other gun forts, made of earth and timber, all linked by a defensive bank and ditch.

Read about the history of Deal Castle 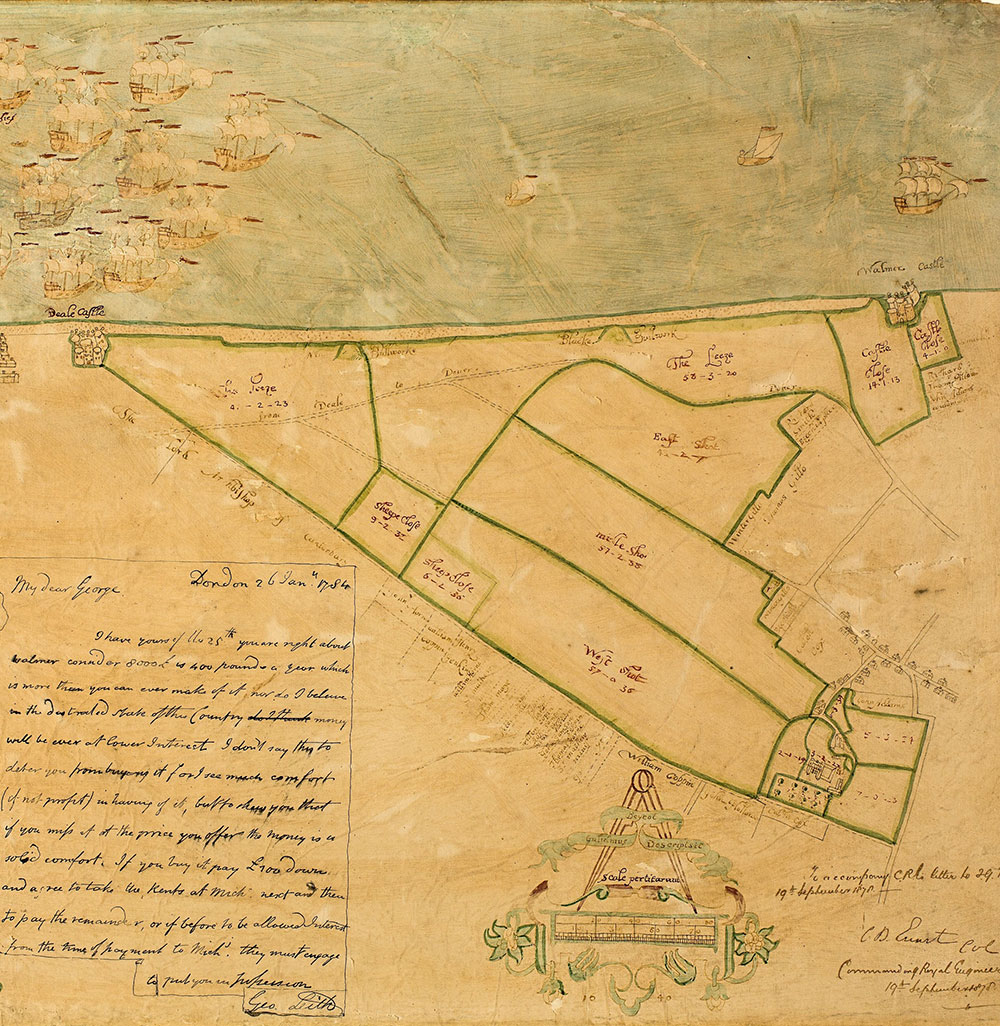 Map of Walmer and Deal in 1640, just before the English Civil War

No invasion took place but a small garrison at Walmer Castle, under the command of a captain, continued to guard the coast in the Tudor and Stuart eras. The castle guns protected the Downs, an offshore anchorage where hundreds of warships and merchant craft often sought refuge. At anchor, they were vulnerable to enemy warships and pirates. The garrison was on high alert during another invasion scare in 1567 and during the Spanish Armada crises of 1587–8 and 1596–7.

War eventually did come to Walmer, in 1648. With the First English Civil War over, King Charles I was a prisoner of Parliament, but rival factions had different views over his fate. In Kent, a rebellion broke out in support of the king. Sailors from the English navy in the Downs captured Sandown, Deal and Walmer castles.

When a Parliamentary force arrived to retake the castles, there was fierce fighting as each one came under siege. Despite attempts to relieve them by royalist troop landings from the sea, each castle was isolated. The soldiers in Walmer came under mortar bombardment and surrendered, realising that they had no hope against such destructive power. Within weeks, the other two castles were also recaptured.

After the English Civil Wars, in the late 17th century England faced a new threat. The Dutch, by then a powerful seafaring and trading nation, clashed with England on the high seas in three major wars. Although the battles fought were mainly epic sea fights, Dutch forces did threaten the English homeland, and its fleet was active around the east and south-east coasts.

In the Second Dutch War (1665–7), extra soldiers came into Walmer Castle and preparations were made to repel a Dutch landing. On 26 June 1667, with the Dutch fleet only a few miles away, men and boys from Deal went to Walmer Castle to help prepare defences. This included digging up and piling turf on the ramparts to absorb the impact of incoming cannon shot. Fortunately for Walmer, when an attack came, it was along the river Medway up to Chatham.

From that time and throughout the ‘long 18th century’ (1688–1815) England (and Britain from 1707) was more often at war than not. Conflict was with an old rival, Spain, and increasingly also with France. This ensured that Walmer had a continuing military role in watching over the Downs, where the anchorage became ever more important.

Until the early 18th century, the garrison was usually 19 men, but larger in times of tension or war. A position in the garrison depended on a recommendation from an influential person, and all posts were awarded by the Lord Warden of the Cinque Ports. Often, the appointed men had other jobs and were not always at the castle. Many did not live there but came to do turns of duty or when summoned in times of need.

Men of the garrison had roles other than military. One was to assist Lords Warden in their duties in maritime law, pilotage and salvage. This included the affairs of the Court of Loadmanage which licensed and supervised ships’ pilots, an important business in the dangerous seas around the Goodwin Sands. Deal pilots took ships long distances, up the Thames and Medway rivers and across the North Sea to Holland.

The garrison also assisted in the salvage of wrecked ships and their cargoes, which were recovered and guarded until claimed, for which Lords Warden and their officers were paid fees. If cargoes were not legally claimed, the Lord Warden kept them all. So men of the garrison were as often policemen and bailiffs as they were soldiers, and were chosen accordingly.

Read more about the Lords Warden of the Cinque Ports
This 1735 engraving by the Buck brothers shows Walmer Castle shortly after the new Lord Warden’s apartment had been built, on the first floor

Between 1725 and 1749, craftsmen and labourers from the Board of Ordnance worked to modernise Walmer Castle. They repaired the bastions, mounted nine new 18-pounder guns and built an armoury containing 100 muskets and 12 pairs of pistols, complete with ammunition.

In the same period, the Lord Warden had the captain’s apartments smartened up and an extension built overlooking the sea, with fine drawing  and dining rooms. The castle became more of a place for the Lord Warden’s personal use and the captain had to move out. By this time the resident garrison comprised a porter, a master gunner and two assistants. The porter lived in the gatehouse, while the gunners occupied a new building in the south-west bastion, called the Gunners’ Cabins.

This growing gentrification of the castle is also seen in the construction of a walled and hedged kitchen garden and new stables. By 1750, the castle was still a place of coast defence, but it was also a modest yet well-equipped occasional seaside retreat for the Lord Warden – and his official residence.

Portrait of Hester Stanhope about 1812

This dual role continued through the 18th century. In 1792 the Prime Minister, William Pitt, became Lord Warden. For ten years he did as previous Lords Warden had done, visiting occasionally, usually in the summer. But in 1802, he made Walmer his main home, though he still travelled extensively and was often in London.

Aided by his niece Lady Hester Stanhope, Pitt developed the privacy of the castle by creating larger grounds around it, occupying the area of today’s gardens and meadows. These new grounds were almost finished when Pitt died in 1806, and were completed and embellished by his successor, Lord Hawkesbury, who later became Lord Liverpool. He bought the land on which the grounds had been made and gifted it to the castle forever.

Guns remained on the castle bastions after 1815, and a gunpowder magazine was kept in the basement. The War Office retained the castle for potential use in wartime until 1905, but in reality the guns were only symbolic and by 1860, Walmer’s fighting days had long gone.

Read more about Hester Stanhope
‘Evacuating a Fortress’, a cartoon of the Duke of Wellington and his housekeeper leaving Walmer Castle, as Queen Victoria arrives to stay in 1842
© Historic England Archive

Lord Liverpool, who held the role from 1806 until 1828, was the last Lord Warden to be paid for the position – the considerable sum of £3,000 per year. After him, the Lord Wardenship was solely an honour, a prestigious reward for public service. It was granted to a succession of politicians and diplomats. Within the century, from eight Lords Warden, five were prime ministers – William Pitt, Lord Liverpool, the Duke of Wellington, Lord Palmerston and Lord Salisbury.

The Duke of Wellington loved Walmer Castle, kept it in good repair and came to stay in most summers. However, the castle and grounds were most greatly improved between 1865 and 1891, when the 2nd Earl Granville made it a permanent home for his wife and children. The earl commissioned the architect George Devey to build what was the last major architectural addition to the castle, a first floor and part second floor over the gatehouse, completed in 1874. It contained rooms for the children, a nursery, schoolroom and accommodation for a governess. Granville also built new stables, kennels and improved the gardens and grounds.

The 20th century and after

By the early 1900s, Walmer Castle was a very old building, increasingly prone to cold and damp in the winter. The War Office were ambiguous about its usefulness and though their staff maintained the castle, they would not provide the facilities required for comfortable modern living. In 1904, they finally conceded that the castle was redundant for military purposes.

The government transferred responsibility for the castle to the Office of Works (a predecessor of English Heritage), following its listing as an ancient monument. In the summer of 1905, a new regime began, with the castle and grounds open to the public when the Lord Warden was not in residence, making Walmer one of the first buildings in state care to be accessible as a historic attraction. The former porters and gardeners became warders, park-keepers and custodians, while also continuing to garden in the grounds.

The office of Lord Warden still exists and is currently held by Admiral of the Fleet Michael Cecil Boyce, Baron Boyce, formerly the United Kingdom’s most senior naval officer, who takes a keen interest in all things connected with Walmer Castle.