Historic Sites of the Isles of Scilly

The Isles of Scilly, off the south-western tip of Cornwall, have a remarkable range of historic sites to visit, from prehistoric burial mounds to Civil War forts. Many of these are looked after by English Heritage.

Exploring the islands on foot, and island-hopping by boat, are the perfect way to discover the Isles of Scilly. Much of their heritage dates from three periods: Bronze Age, Tudor and the Civil War.

Porth Hellick Down Burial Chamber seen from the air

There are now five inhabited islands in the Isles of Scilly, as well as dozens of smaller islands, separated by shallow sea. In the Bronze Age (about 2500 BC to 800 BC), however, the landscape was very different because the sea level was slightly lower. There was probably one main island, with the hill of St Mary’s in the south and a ridge of high ground (modern Bryher, Tresco and St Martin’s) in the north. Further west lay the separate islands of St Agnes and the Western Rocks, all of which were much larger in the Bronze Age than today.

St Mary’s, the largest of the islands, has the best range of surviving prehistoric sites. The distinctive Bronze Age burial chambers known as entrance graves, with their great stone and earth mounds, are particularly impressive. On the north-east side of the island lie the two Innisidgen entrance graves, known as Upper and Lower Innisidgen. The upper mound is particularly well preserved, and has striking views across the shallow sea to St Martin’s – a view which, earlier in prehistory, would have been over a fertile valley.

To the north west lies the Bronze Age entrance grave of Bant’s Carn. Its earthen mound is retained by a stone wall and contains an impressive burial chamber covered with massive capstones. When the chamber was excavated in the early 20th century, it contained cremated human bone and broken pottery, perhaps the remains of funerary urns.

A few metres down the slope from Bant’s Carn is Halangy Down Ancient Village, a hamlet or village from the Iron Age (about 800 BC to AD 100) and Roman period. Here the remains of nearly a dozen interconnecting stone houses can be seen.

There are several other prehistoric sites on St Mary’s, including a Bronze Age menhir (standing stone) beside Harry’s Walls, and Long Rock menhir towards the north of the island (not in English Heritage guardianship). The site of Nornour on the Eastern Isles is another prehistoric village. Several artefacts from the site – including Roman offerings from a later shrine – are on display in the Isles of Scilly Museum on St Mary’s.

The Old Blockhouse on Tresco. It was built during the reign of Edward VI, but did not see action until over 100 years later, during the Civil Wars

By the 16th century the Isles of Scilly were a weak spot in England’s defences. If captured, they would have made an ideal base for England’s enemies, whether France, Spain or ‘privateers’ – effectively pirates who were licensed to carry out private raids on behalf of their governments. In 1547 Lord Admiral Thomas Seymour (the younger brother of Edward Seymour, England’s de facto ruler during the minority of Edward VI) visited the islands. About a year later work began on fortifying the islands, starting with Tresco.

The Old Blockhouse was probably built in the late 1540s to protect the harbour of Old Grimsby. The stone building has a raised gun floor that looks east over the harbour.

On the other side of Tresco stands the larger artillery fort King Charles’s Castle, built in the early 1550s but named somewhat confusingly for its occupation by Royalist forces a century later, during the English Civil Wars. Its gunports face west across New Grimsby Harbour.

The fort known as Harry’s Walls lies on the west side of St Mary’s. This artillery battery – started in 1551 but never finished – was planned as a square with sharply angled bastions at each corner, defending the main harbour of the island.

The most impressive fortification on Scilly is the Garrison, the defences of the headland beside Hugh Town, the main settlement on St Mary’s. Fortification began in the 1590s when a Spanish invasion was feared, and completed with a ditch and bank surrounding the headland during the English Civil Wars (1642–51), when about 1,000 Royalist troops held the islands for the king. But there was no fighting here until the very end of the war in 1651.

In the first half of the 18th century the defences were upgraded. The masonry curtain wall was extended to surround almost the whole of the headland and numerous gun batteries were added.

Today, the Garrison Walls are in the care of English Heritage, and visitors can walk around most of their length. The Star Castle on the Garrison (now a privately owned hotel) is a striking star-shaped fortress built in 1593.

On Tresco the appropriately named Cromwell’s Castle is a stone gun tower built by Parliamentarian forces after they captured the islands from the Royalists in 1651.

Cannon conservation on the Isles of Scilly

Ranged around the Garrison Walls are numerous cannon that date from the 18th and early 19th centuries. Follow Collections Conservator Bethan Stanley as she travels to St Mary’s to work on some of the cannon in need of care and attention.

You can download short audio guides for all the English Heritage sites on the Isles of Scilly. They can be played below, or downloaded to your mobile phone to listen to later. 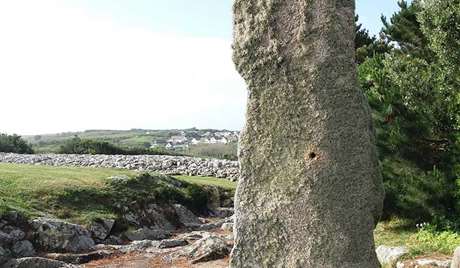 This tall standing stone, or menhir, close to Harry’s Walls, dates from the Bronze Age. 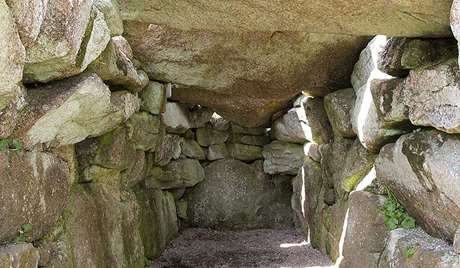 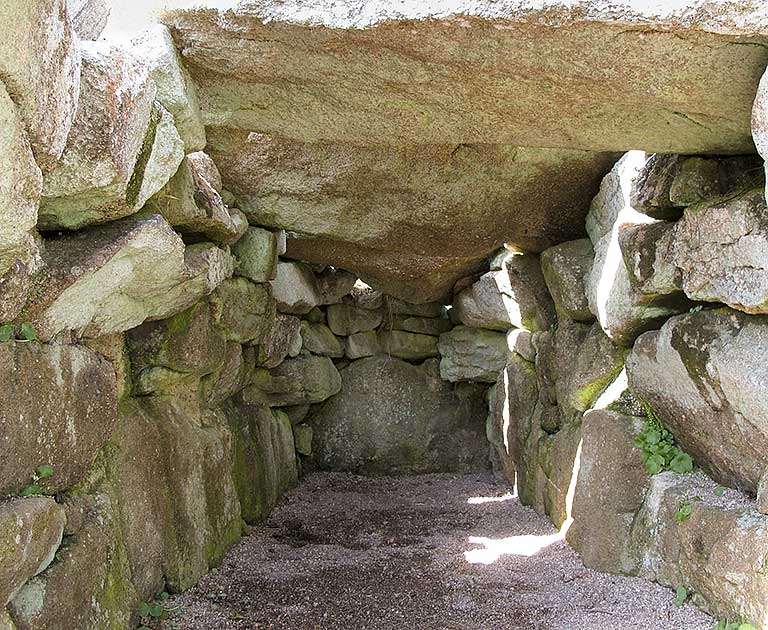 The burial chamber at Bant’s Carn. Up to 5 feet (1.5 metres) high in places, it is roofed with four enormous capstones. 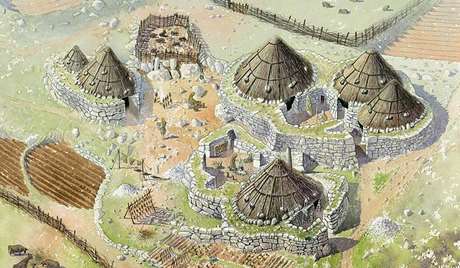 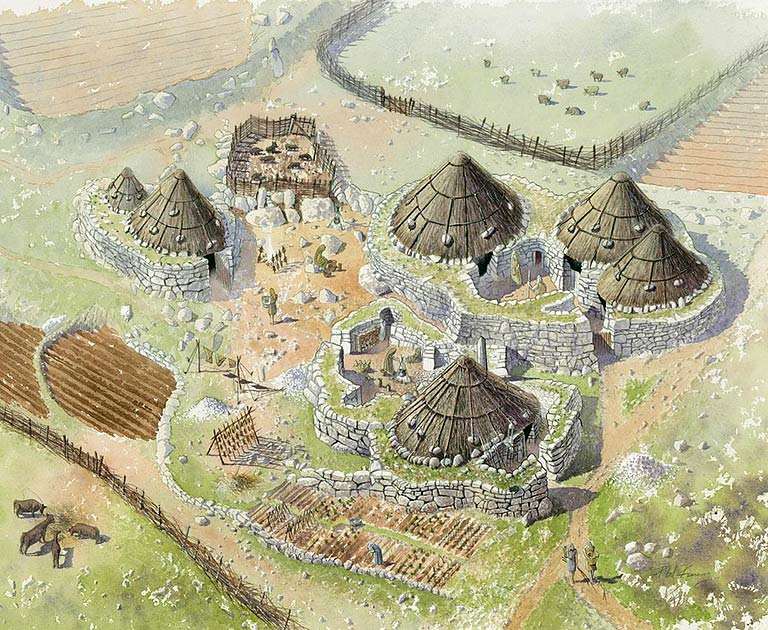 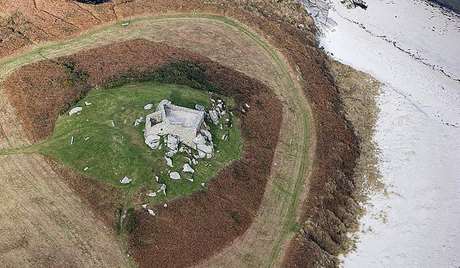 An aerial view of the Old Blockhouse, built between 1548 and 1554 to defend the harbour of Old Grimsby, on the east coast of Tresco. 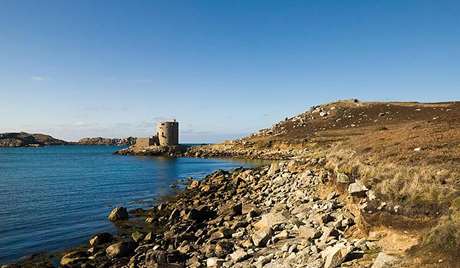 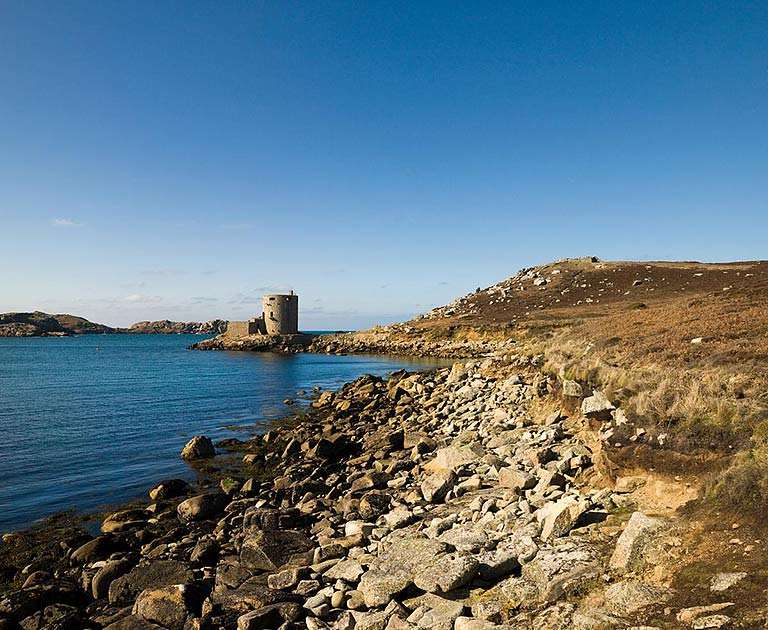 Cromwell’s Castle on Tresco guards one of the main routes of entry to the heart of the islands and the deep water approach to New Grimsby harbour. It is one of only a few stone fortifications that survive from the Interregnum (1649–60) and takes its name from Oliver Cromwell. 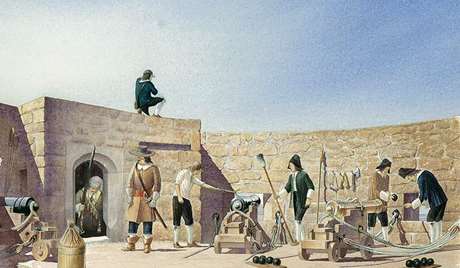 The gun platform of Cromwell’s Castle 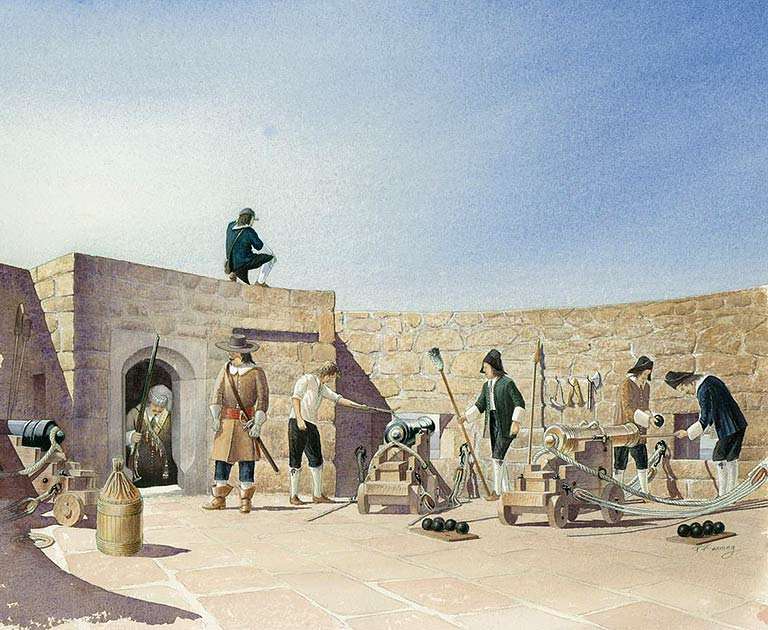 A reconstruction illustration showing Parliamentarian gunners operating cannon on the gun platform on top of Cromwell's Castle, as it may have appeared in the 1650s after the conquest of the formerly Royalist Isles of Scilly. (© Historic England; illustration by Phil Kenning) 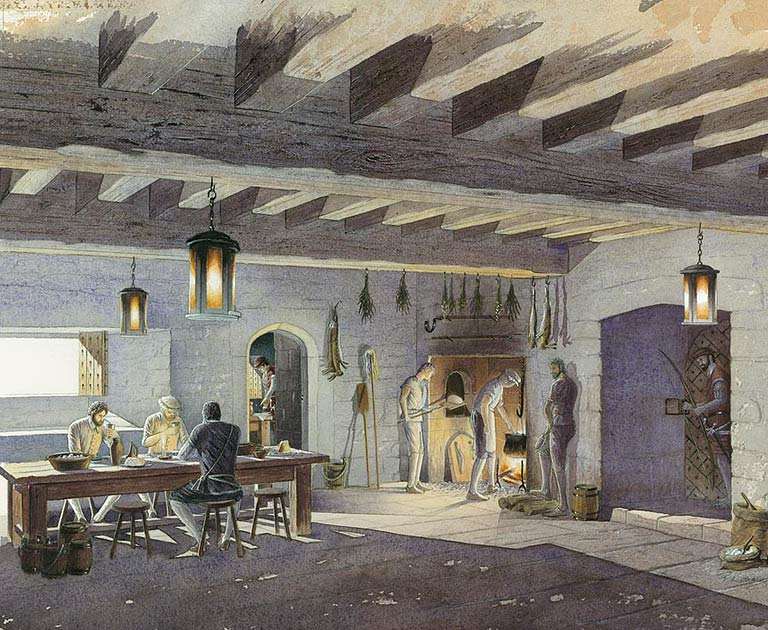 This reconstruction illustration shows the domestic quarters at King Charles’s Castle as they may have looked in the mid-16th century. (© Historic England; illustration by Phil Kenning) 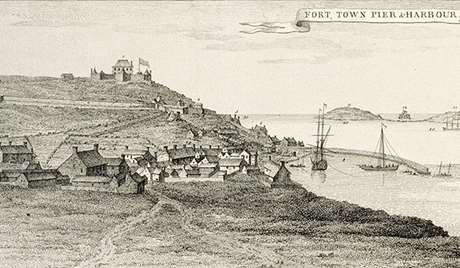 This detail from an engraving of a drawing dated 1752 shows the Garrison Walls and Star Castle on the left, with a view of some of the northern islands in the background 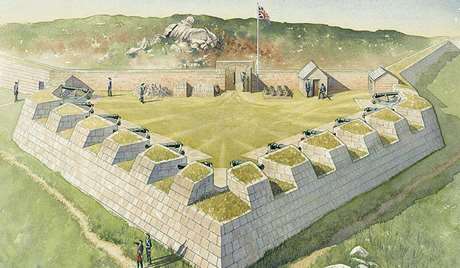 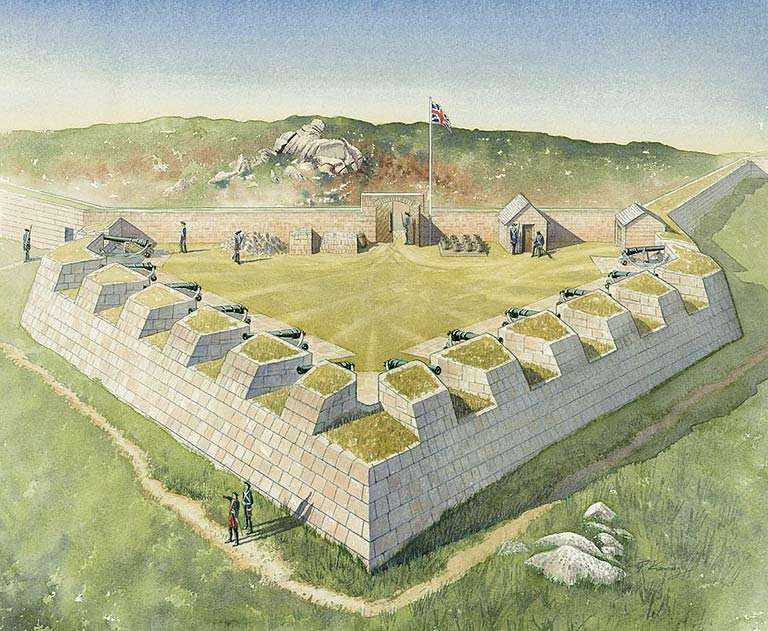 This reconstruction illustration shows Woolpack Point Battery, part of the Garrison Walls defences on St Mary’s, as it may have appeared soon after its completion in the late 1740s. (© Historic England; illustration by Phil Kenning) 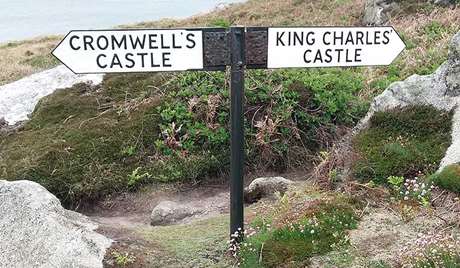 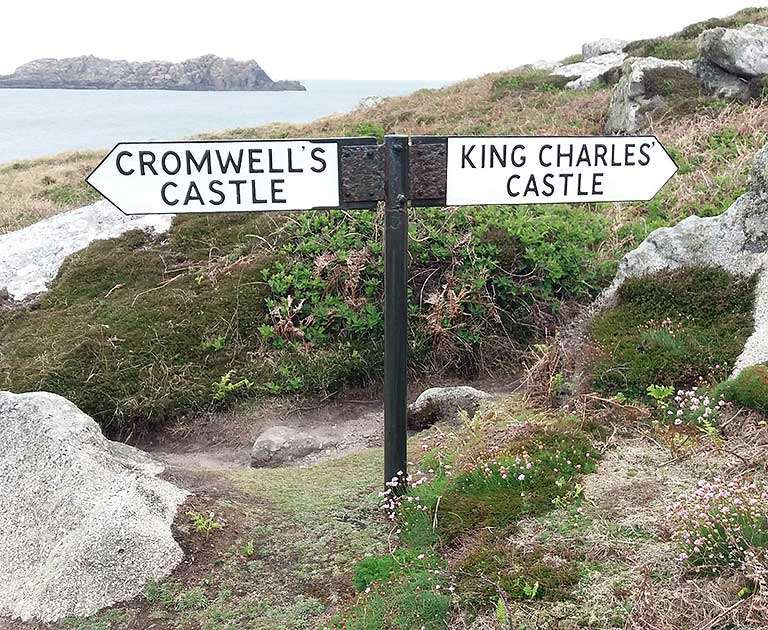 A vintage Ministry of Works signpost on Tresco

The Isles of Scilly Museum and the Tourist Office sell copies of the excellent guide Scilly’s Archaeological Heritage, which includes useful maps and walking routes. The museum has informative displays about the islands’ history (entrance charge).

On the Garrison at St Mary’s, the former Powder Magazine (where gunpowder was stored) has a free English Heritage exhibition charting the military history of the islands.

Defending Scilly, by Mark Bowden, is a well-illustrated book about the islands’ military history, and includes maps and a suggested walking tour.