Spotlight on the Iron Bridge

Spanning the River Severn at the heart of the Ironbridge Gorge World Heritage Site, discover why this much-loved icon continues to inspire locals, tourists and engineering enthusiasts today.

The Iron Bridge underwent an extensive conservation project in 2018 to preserve the bridge for future generations to enjoy.

Why we love the Iron Bridge

'This graceful structure in its beautiful setting has been a source of endless fascination and has given me a lifetime of study end enjoyment. For the first time cast iron was used structurally and gave such confidence in this previously untried material that many other iron bridges followed,' David de Haan, historian

'The bridge resides in the heart of the Ironbridge Gorge, which is a place that many call home, with many living here for generations keeping the memories and history alive in this unique place,'  Nicola Lowery, councillor for Ironbridge Gorge

'After it was built cast iron came to be widely used in bridges, aqueducts and buildings. For me it represents a pivotal moment in development of metallurgic design and engineering,' Morgan Cowles, English Heritage Head of Conservation Maintenance

Postcard from the Iron Bridge

Explore the Iron Bridge and follow our drone camera as we weave below and above the magnificent structure.

It's not just people who have trekked across the Iron Bridge. Take a look at this elephant, who famously marched across the bridge to promote the Chapman's Zoo-Circus in 1932.

As part of its Shropshire tour, the circus performed two shows for five towns across the region. To create buzz around the circus, an elephant dressed in a Chapman's advertising banner, crossed the Iron Bridge on 15 May. Unsurprisingly the stunt attracted a large crowd to marvel at the spectacle. This iconic image of the elephant crossing the bridge remains synonomous with the celebration of the bridge and its strength. Pick up a postcard or print from one of the nearby community outlets.

What makes the Iron Bridge special?

As the world's first bridge to be built of cast iron, the Iron Bridge set a new, exciting precendent for engineers around the world. It was 1779 and the surrounding area was a bustling hub of industrial activity at the forefront of what would become known as the Industrial Revolution. The bridge was so successful that it gave its name to the whole Ironbridge Gorge - now a World Heritage Site.

Enjoy views along Britain's longest river, the River Severn, which snakes through the west of England towards the Severn Estuary. Picture what life was like in the Ironbridge Gorge in Shropshire when it was populated by smokey industrial activity more than 200 years ago.

Made from 378 tons of iron, the bridge is a credit to the driving force behind the project, Abraham Darby III. His skill was a family affair, too. In the early 18th century, Darby's grandfather, Abraham Darby I, pioneered an economically viable method for the mass production of iron using coke. This process was a catalyst for the Industrial Revolution. Today you can see the ingenious craftsmanship of the bridge that changed the way iron was used forever.

Three things to look out for 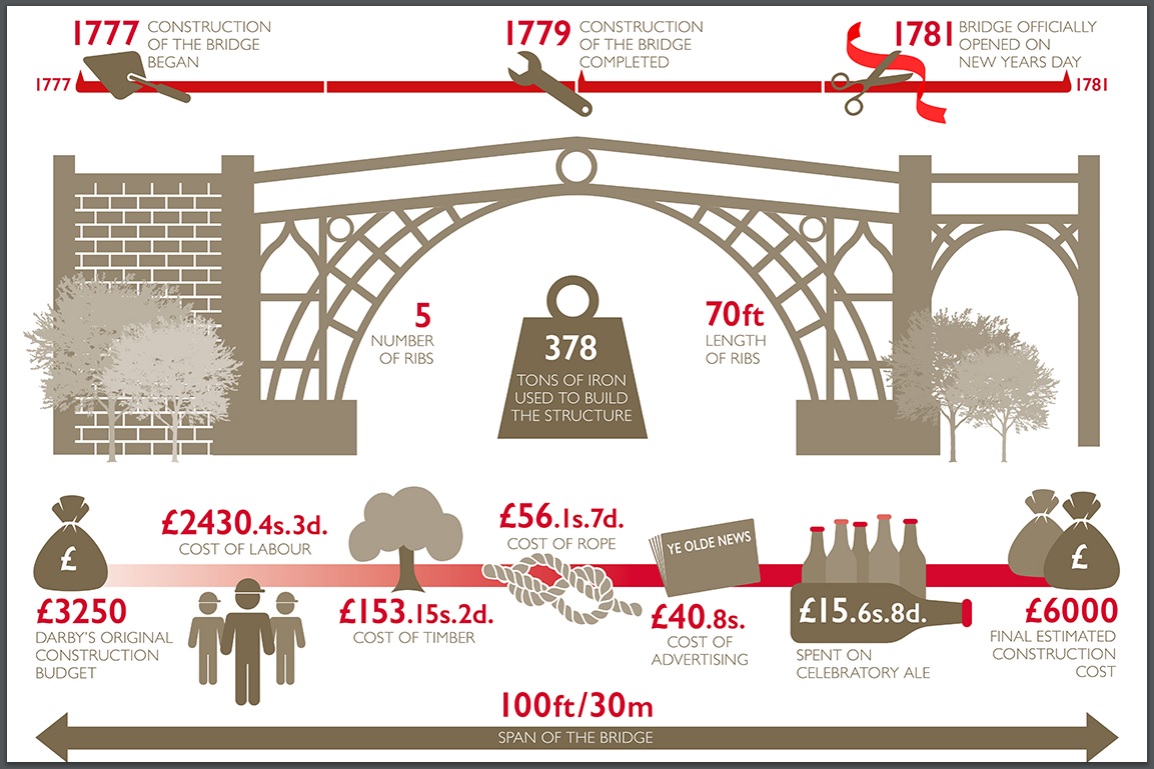 In 2017-18 we undertook a major conservation project to restore the Iron Bridge, due to stresses in the ironwork since its original construction. There has also been disruptive ground movement over the centuries and an earthquake at the end of the 19th century.

We cast more than 300 bespoke iron wedges to replace those which support the deck. A team of six painters then applied 2,400 litres of paint to return to bridge to its original red-brown hue after new evidence came to light during the conservation process.

Without your support this project would not have been possible.